Posted on November 4, 2016 by Granger Meador

Columnist Dana Milbank struck a chord for me with his recent post about Baby Boomers vs. Generation X. While generational stereotypes are overly simplistic, they do provide an interesting lens through which to focus on our national tale of political woe at the tail end of the most unpleasant Presidential campaign in memory.

Since this post comes amidst early voting at the end of this miserably long election cycle, let me clarify that I am not trying to sway any votes. Joklahoma has evolved into a Red Sea of conservatives and evangelicals that will inevitably give all of its votes in the Electoral College to Trump, even though he lost in the state’s Republican primary. My interest here is with the generational divide at the national level between these two candidates, both of whom are generally disliked and untrustworthy, and the Strauss-Howe generational theory Milbank cites in his column.

I have often been puzzled by the extremism of Baby Boomers, those born after World War II through the early 1960s, with those who grew up coddled in the 1950s showing the strongest match to the traditional Boomer stereotypes. Many are liberal, but Milbank points out that twice as many are conservative, which might surprise you since in their youth the late 1960s hippies and other liberal movements of the Baby Boomers got most of the press with their protests against the conservative establishment.

My particular difficulty understanding Baby Boomers arises from a lack of familial experience. My father is from The Greatest Generation and my mother is from The Silent Generation. Dad came of age during the Great Depression and served in the Army in World War II. Mom was born during the Great Depression, was a rural farm child throughout World War II, and spent her teenage years moving over a dozen times in a nomadic path back and forth across the rural southwest. So neither of them are anything like Baby Boomers. My mother was 29 and my father was 41 when I was born, so instead of being a Baby Boomer, I was born amidst the Baby Bust. I grew up as the only child in our household and turned out confident and independent but with the strong streaks of cynicism and pragmatism that characterize Gen-Xers.

There are some clear differences among the three generations now dominating the workforce: the Baby Boomers, Generation X, and the Millennials. And those differences are echoed in our politics. 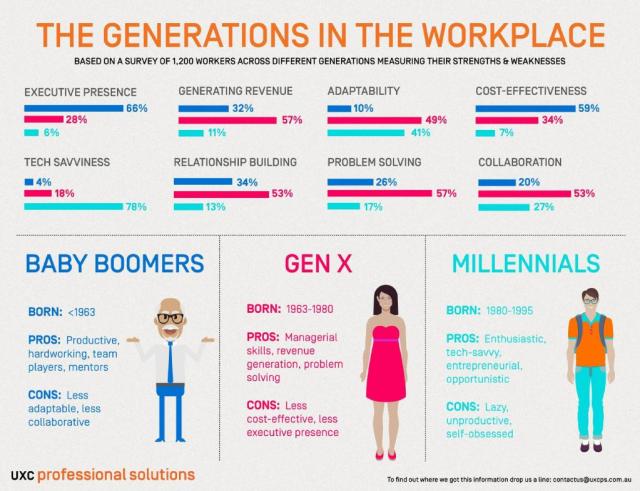 I’d say these differences carry over into politics

I watched the Baby Boomers take over the White House with Bill Clinton in 1992 and overrun the U.S. House of Representatives in 1994. The more mature U.S. Senate shifted to Boomer control a bit later. With that notably selfish generation in power (and yes, thankfully there are always plenty of exceptions to these broad stereotypes), politics took a turn for the worse. Often unwilling to compromise, the Baby Boomers in power were extremely partisan. Throughout my lifetime the partisanship has steadily become more extreme, perpetuated and amplified by gerrymandering. The end result is endless Congressional gridlock and the godawful Presidential election of 2016.

Take a look at the levels of partisanship in Congress and how the moderate middle has shrunk to where it can no longer govern:

Wonderful illustration of partisanship in the U.S. Congress over time

It is interesting to note that Milbank’s complaint about Baby Boomer politics comes at the end of the second term of a Gen-X President. Barack Obama was born in 1961, so he would either be a late Baby Boomer or an early Baby Buster, and he definitely has the characteristics of a Gen-X baby buster. Neil Howe, the co-author of The Fourth Turning, which Milbank cites in his column, remarked in 2009 about Obama:

It’s interesting that he is the first leader in America to call himself “post-Boomer.” As a matter of fact, he talks regularly about how he intends to put an end to everything dysfunctional about Boomer politics: the polarization, the culture wars, the scorched-earth rhetoric, the identity politics, all of that. I understand a lot of people do not believe he can actually do this, but it’s interesting that this is the rhetoric he chooses. That rhetoric is one reason why the vast majority of Millennials voted for him.

Sadly for all of us, Obama failed to improve the toxic political climate, proving unable to bridge the partisan divide. He got a mangled national health care plan through Congress and then things pretty much fell apart. With Congress gridlocked, he eventually resorted to Executive Orders to enact some of his agenda. By the way, those disagreeing with his politics complain tirelessly about this approach, so you might be surprised to find that Obama’s terms have had the lowest rate of Executive Orders since Benjamin Harrison. But both George W. Bush and Barack Obama used Executive Orders to greatly expand Presidential power amidst the gridlock in Congress.

No matter who wins this election, we will be replacing Obama with an old Baby Boomer after the most partisan, hateful, and unhealthy campaign we’ve ever endured. It is a certainty that we’ll have many more scandals with either of these candidates than we did with Obama. The fear-mongering and obstructionism is likely to be worse than ever for the next four years. These candidates could be the last from the Baby Boomers and are by far the worst.

Maybe Milbank is right: perhaps the Boomers will finally burn themselves out by 2020, allowing more pragmatic leaders from Generation X to rise from the rubble and begin rebuilding our body politic. I sure hope so, but Gen X is small. We’re the Baby Bust, remember? The Millennials are already the largest demographic in the workforce, but they are also less politically engaged. Perhaps, as they did for Obama’s first term, they’ll join forces with us Gen-Xers and together we can push the Baby Boomers out of the White House for good. I sure hope so.

I enjoy day hikes, photography, podcasts, reading, web design, and technology. My wife Wendy and I work in the Bartlesville Public Schools in northeast Oklahoma, but this blog is outside the scope of our employment.
View all posts by Granger Meador →
This entry was posted in politics. Bookmark the permalink.

2 Responses to Those crazy babies