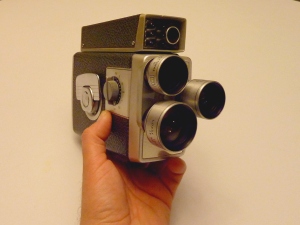 When I was growing up our family used a 1961 wind-up Kodak 8 mm silent movie camera for home movies.  It pre-dated the better known and highly improved Super 8 cartridge film that came out in 1965.  Our camera used standard 16 mm film which you threaded through the camera, exposed half of the film, then reversed and rethreaded to expose the other half.  In processing they would cut the film in half and you’d end up with a small spliced reel of 8 mm film.  My dad would later splice together several of the small reels of film into longer movies we would watch.

My parents still have a collection of these films from 1961-1974, with indoor shots made possible by a blindingly bright four-lamp light bar that flooded the room with light to compensate for the movie film’s limitations.  We’d watch them on a silent movie projector at 18 frames per second – a far cry from modern videos!

About thirty years ago, when I was in junior high, three different friends joined me in using that old camera to create short film clips.  We were never quite sure what we were capturing, since one had to shoot the film through a tiny viewfinder and then send it out for processing.  A week or two later we’d find out if we had made anything worth watching.   And, of course, I must admit that we never did.

But that won’t deter me from offering you the chance to view our incredible junior high film achievements.  Over Winter Break I used my parents’ original Bolex projector to run the old reels on the home movie screen, capturing those fine cinematic creations with my latest digital camera and then adding some music.  So here are the stupendous digital remasters of our epic films:

Some stop-motion animations with Legos which I made with my friends Kyle and Jeff:

The Death of a Starship

This is a tragic film, in more ways than one, which my friend Dale and I shot in my backyard.  We loaded up an old table top with some milk jugs, flares, vulcanizing tire patches, and an outdoor faucet cover.  Lowering it on highly visible strings from the swingset, we set it ablaze in a disaster of a film.   If you look carefully, you might spot a little plane taking off from the mother ship after the faucet cover, er, main dome ignites.  And you’ll easily spot the squirt bottle and fire extinguisher in the background that my mother insisted we have on hand.

UPDATE: Dale was running his own Super 8 camera for the above shoot and also converted his film to digital format.  It features even more footage of the burning ship, a camera zoom, and squirt bottle action!  Plus he had some film left over which we used to create, you guessed it, another Lego animation:

I enjoy day hikes, photography, podcasts, reading, web design, and technology. My wife Wendy and I work in the Bartlesville Public Schools in northeast Oklahoma, but this blog is outside the scope of our employment.
View all posts by Granger Meador →
This entry was posted in video. Bookmark the permalink.