I missed my classes on Friday so that I could attend a meeting of the newly formed Transition Committee for the Oklahoma Academic Standards for Science. Those new science standards were threatened by a committee vote in the state House of Representatives last week, which prompted me after the morning meeting to travel north to the state capitol to join fellow committee member Sarah Vann of Owasso in meeting with the policy advisor for the Speaker of the House in the Speaker’s office, followed by visits with Senator Ford and Representative Sears of Bartlesville. We are hopeful that the new standards, which were adopted unanimously by the State Board of Education in March, will remain in place.

The politicking meant I was a few hours late in returning to Bartlesville for an overnight trip with Wendy to Missouri. We had a late dinner at the Pizza Hut in Vinita on our way northeast to spend the night at a Comfort Inn in Springfield. What a contrast our comfortable room was to the clean but quite minimalist Motel 6 room I had stayed at in Norman the night before; I’ll spend much more for our outings as a couple than on myself when I need unreimbursed lodging for school business.

Our room was so comfortable that we had a late start on Saturday, finally departing for lunch at J. Parrino’s Queen City Deli. I enjoyed my Burnes sandwich, consisting of a beef tenderloin on garlic cheese bread with mild horseradish, more than Wendy did her Meatball Po-Boy. Happily I followed that up with a trip downtown to The Cup for fantastic cupcakes. We both marveled at our respective yummy choices: a lemon drop cupcake for me and a mocha cappuccino cupcake for her. The frosting was amazing, the cake moist and delicious, and I know we would have to increase our respective exercise regimes if we ever had a similar shop in Bartlesville. 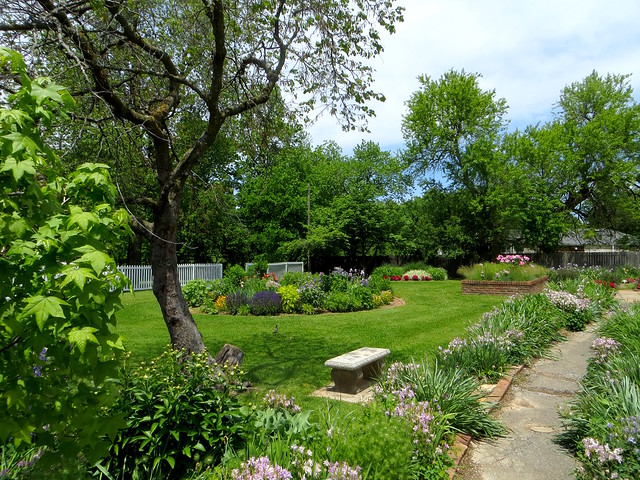 We next stopped at the rose garden at Phelps Grove Park, a place I always try to visit in season with its various beds providing bursts of color everywhere one turns. The peak had passed for spring blooms, but we still found many lovely flowers on display, including roses and peonies whose petals were wide open. We saw a few birds, many bees, and one rabbit in the garden area with poppies, irises, a nice border of dianthus, and much more. The bees were particularly interested in the peony pollen.

Before we headed north to Ha Ha Tonka State Park for a hike, Wendy asked me to drive by L.E. Meador park so she could see the facility honoring Dr. Lewis Elbern Meador, my third cousin twice removed, who back in 1973 was named “Springfieldian of the Century”. He taught economics and political science for 43 years at Drury University, chaired the creation of Springfield’s “home-rule” city charter, wrote most of Missouri’s 1947 state constitution, helped end the Pendergast machine’s control of the state judiciary, and was instrumental in establishing the Wilson’s Creek National Battlefield. My own politicking pales in comparison!

Back in September 2010 I hiked most of the trails at Ha Ha Tonka State Park, which is a 90-minute drive north of Springfield. Wendy surprised me with a map she had created showing all of the trails I had hiked on my solo trip back then, and highlighting some trails I had not taken which we might trek together on this sunny afternoon. We began with a 0.9 mile hike along the Castle Trail from a parking lot down and around the famous ruined Castle at the park. Soon we could spy through the trees the stone remains looming over an arm of the Lake of the Ozarks. 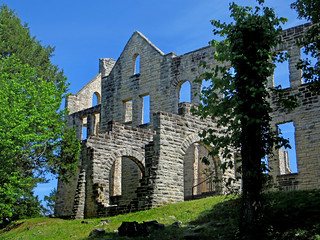 The Castle at Ha Ha Tonka

We saw signage of the castle in its heyday before confronting the ruined edifice. I posed at the castle overlook with the imposing water tower in the background which was part of the original estate. We circled the building and then decided to go hike the Dolomite Rock Trail, which promised to have far fewer families with small children milling about.

The trailhead was deserted when we arrived at the River Cave Area, with the eponymous cave having two sinkhole entrances, both sealed off except to flying bats. The second sinkhole had interesting eroded walls. Soon we were crossing sunny glades with Indian Paintbrush flowers. 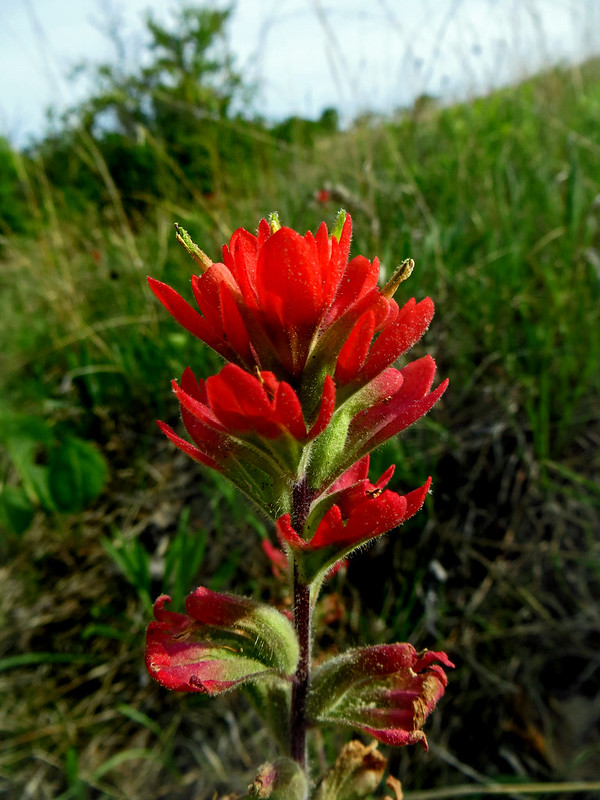 We climbed upward to a view of the stone water tower atop a distant hill. We re-entered the woods and briefly followed part of an old road before crossing another glade. We then plunged back into the woods along a hillside, passing a tree which had been girdled to death by barbed wire. Above and to our left was a long bluffline with distinctive erosion layering, while a creek flowed below to our right. Wendy and I both remarked upon a small gothic arch in the bluff. She posed by the last section of bluff as the trail turned about. We heard a deer crashing through the brush and I spied it leaping away uphill, with a bobcat jumping after it. If only my camera could have caught the action! 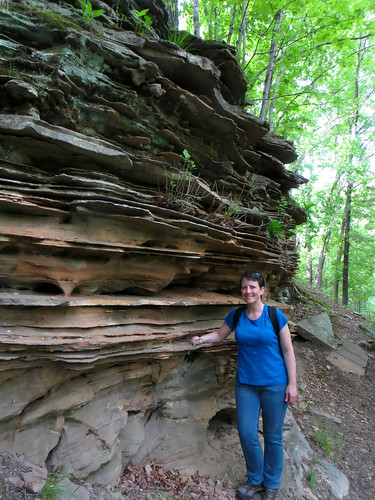 Wendy and the layered bluff

Wendy pointed out some trailside toadstools, and as we crossed the high point of the ridge we were briefly aside a low rock wall. Throughout our trek Wendy was spying rocks with small crystals and enjoying the wildflowers. When we reached the old road on our return journey, we rested and discovered we both had several ticks despite our use of Cutter when we began our hike hours before. When we reached the car we removed all of the ticks that we could find and changed clothes and washed up a bit before heading toward nearby Camdenton for dinner.

TripAdvisor recommended Der Essen Platz (The Eating Place) near Bridal Cave. I’ve been leery of German food for decades, but I thoroughly enjoyed my lemony weiner schnitzel and Wendy said her wurst and apples were deliciously prepared. The restaurant has a commanding view of the Lake of the Ozarks below, with hummingbirds fluttering about several feeders outside the windows. Our waitress cracked us up when she entered the room belting out “Here Comes Santa Claus” as she delivered what I presume was Samichlaus beer to the neighboring table. She was a hoot, speaking to regulars at another table about her ongoing efforts to rescue neglected dogs.

While we only hiked less than four miles on this trip, it was a relaxing and enjoyable escape. The weather is warming up, so we only have a few weeks left before hiking in the Ozarks becomes too miserable to contemplate.