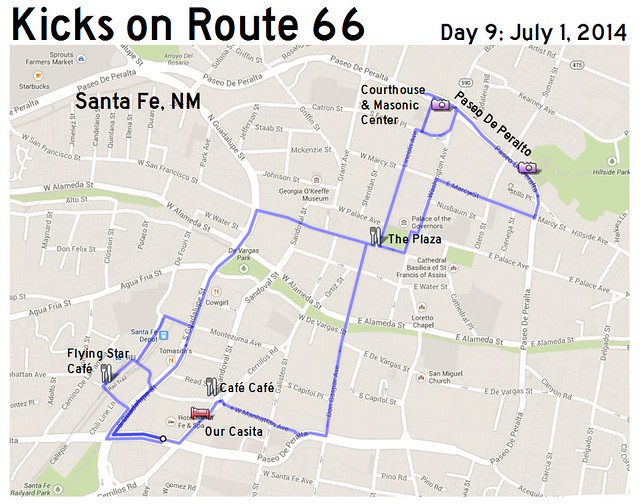 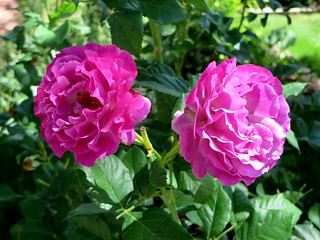 The day after our climactic day hike and flamenco performance, Wendy and I took it easy in Santa Fe. We had an unappealing breakfast at the Flying Star Cafe in the Railyard and walked to the plaza. A stop along the way at the Hilton let me shoot a nice piece of corridor artwork. At the plaza we indulged in cookies and a shake at the Häagen-Dazs. Then we found a place to sit at the plaza amidst beautiful blooms. Wendy tipped a beautiful busker who was playing “Yesterday” and “Blackbird” on a guitar.

I’d considered finally walking along the famous Canyon Road and its galleries, which I’ve never seen, but it was a Sunday, and I figured they might be shut. So I saved that for a future trip and instead walked with Wendy along the northeastern part of the Paseo de Peralta, an old street which encircles downtown. I liked seeing some of the old buildings. It was a sign of the times that the grand old Scottish Rite Temple was up for sale; its 1901 Moorish Revival look doesn’t blend too well with its surroundings, but it is a striking building. Declining membership means the local chapter lacks the cash flow to maintain it. 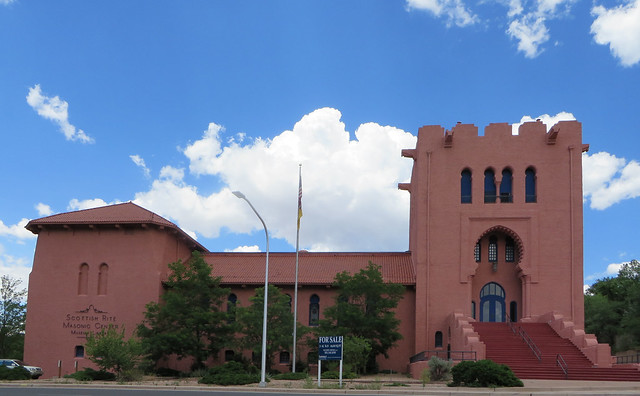 Name your price for this unusual temple

Across the street from the temple are the beautiful grounds of the Santiago E. Campos U.S. Courthouse. The building was started in 1850 and intended as the territorial capitol, but insufficient funding meant it would not be completed until 1886, by which time a new capitol was under construction. It has beautiful stone walls, and the grounds have lovely tall trees and a nice grass lawn. 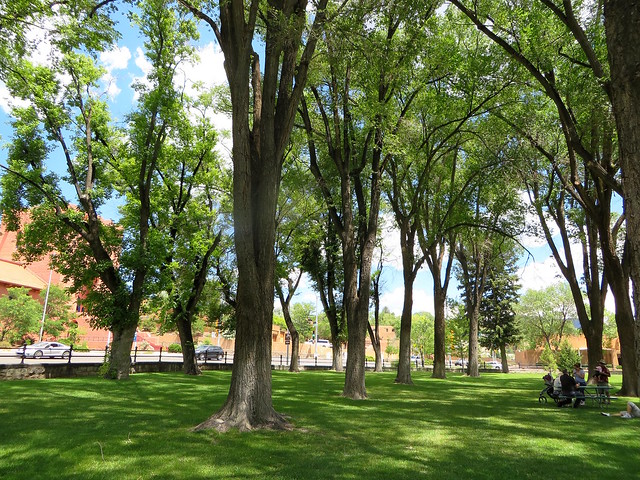 Out in front of City Hall we passed the statue of St. Francis and his often-petted prairie dog. The saint appears in various places about the city, which was originally called La Villa Real de la Santa Fé de San Francisco de Asís (The Royal City of the Holy Faith of St. Francis of Assisi).

We passed a VW Westfalia camper, something my father would appreciate, on our way back to our casita. My head ached, so I went out for a stroll around the block, finding a statue at the adjacent hotel of a Hopi maiden sporting immense squashblossom whorls. Princess Leia had nothing on her!

Dinner was a delicious pizza at the adjacent Café Café, followed by us relaxing on our patio for our final evening in Santa Fe.

The tenth day began with a wonderful early lunch at Tia Sophia’s downtown. I had beef tacos with Spanish rice, and Wendy loved the tender chicken in her green chile chicken enchiladas. She reported the tamales were good and spicy, if a bit grainy. We enjoyed sopaipillas and honey, bemoaning the fact that we would be leaving behind the wonderful food of New Mexico. Wendy posed for me in a downtown walkway, our last shot in Santa Fe.

Princess the Camry took us southeast to the old Cline’s Corners tourist stop off I-40. The most notable thing was a tremendous collection of horns on a wall. After refreshing ourselves, we headed due east on I-40 back to Amarillo. We pulled off in Santa Rosa to see its famous Blue Hole, an 80-foot-deep pool of 61-degree water which had attracted a number of swimmers. Wendy noted how clear the outflow was.

The Blue Hole at Santa Rosa

Just past Santa Rosa, the interstate divides the ghost town of Cuervo; Wendy thought it must be a fake ghost town or movie set, considering the oddity of driving through it on an interstate. But Cuervo is quite real, as are other ghost towns like Endee, Bard, and San Jon. We were puzzled by the names, but they made sense when we found out Endee got its name from the old ND ranch and Bard was probably a ranch name as well: the Bar-D, which reminds me of the chuckwagon show I saw in Durango back in 2011.

We had dinner at the yummy Blue Sky Burgers in Amarillo. Our evening entertainment was Errol Morris’s memorable documentary The Thin Blue Line, which saved a man from death row.

The final day of our trip was a long drive back to Oklahoma City to have dinner with my folks and then onward back home to Bartlesville.

We began with a great breakfast near our hotel in Amarillo at Ye Olde Pancake Station. Before we left Texas, we pulled off I-40 to take old Route 66 through Shamrock to drive by the restored U Drop Inn, which frankly is the best-looking thing in town. Shamrock, like so many other towns along old Route 66, has been bypassed by the interstate and suffered mightily for it. 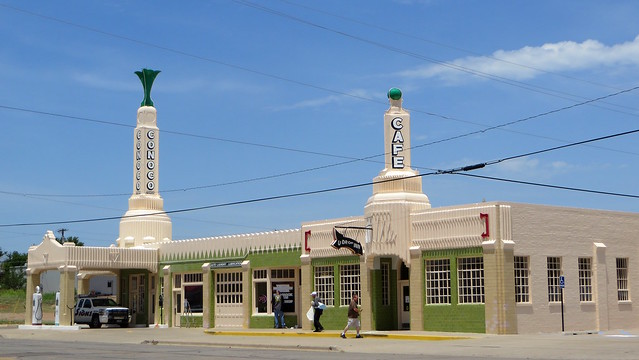 U Drop Inn at Shamrock, Texas

The sun was setting as we drove up US 75 to Bartlesville, glad to be returning home, but also wishing that we could spend more time having Kicks on Route 66.