I find myself relying more and more upon computer storage and services hosted on remote server farms in “the cloud“. While I still have massive amounts of data stored and accessed locally, I use the cloud to synchronize (and thus effectively backup) essential data for work and I find myself sharing data through cloud services such as Dropbox, Google Drive, and Microsoft OneDrive. I’m also using more cloud applications, ranging from the simplistic but sometimes adequate Google Drive spreadsheets and word processor to the online versions of Word, Excel, and Powerpoint through my $99/year Microsoft Office 365 Home subscription. 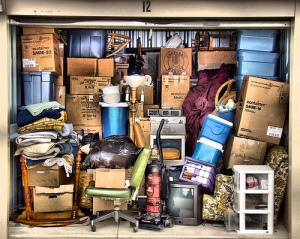 Our consumer society means that most of us keep accumulating items, veering off into collecting and hoarding on occasion. I see many folks parking their expensive cars out on the driveway since their garage is filled with junk they seldom use. I’ve managed to avoid that trap and keep my garage clear for vehicles by throwing worn things out and donating gently used items to Goodwill. But the cabinets and closets and shelves of Meador Manor are stuffed with seldom used items, and the edges of the garage are filling up too, so this summer I plan to do a massive purge.

The problem of too much little-used stuff also plagues my digital life. My desktop system in my home office now has a one-terabyte primary solid state drive along with two older one-terabyte spinning hard drives which I now use for backups. Over in the living room there is a 1.25 TB network storage drive attached to my 4th generation Apple Airport Extreme router, along with a 0.5 TB external drive attached to my old Tivo HD digital video recorder. Whenever I have a big chunk of data files which I really don’t think I’ll ever need, such as television series which I purchased on iTunes and don’t plan to re-watch, I shove that over onto the network drive. I know that someday that big spinning drive will crash, but I probably won’t miss it when it goes. I originally bought that network drive to access files via my 3rd generation MacBook Air, but I seldom use that functionality.

Here is a breakdown of the data I’m storing locally on my primary computer drive and online, ignoring the various backups and omitting software and overhead: 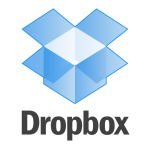 I only infrequently backup my primary drive to one of its spinning cousins in the desktop computer, and backup about twice a year to a portable drive which I store offsite. That isn’t the frequency of backup which professionals recommend, but was enough for me back when I was running two local hard drives in a RAID 1 mirrored setup. I eventually abandoned RAID 1 because system support for it was problematic, but I switched to solid state, which should be quite reliable and immune to crashes.

But the cloud is what truly eases my concern about adequate backups. All of my crucial documents are stored in my Dropbox cloud account. I spend $99/year for that service, plus an additional $39/year for their “packrat service” that preserves every previous version of a file. Dropbox started out with less capacity, but now my account allows for a full terabyte of storage. I can have specific Dropbox directories synchronized to any desktop or laptop computer as needed for convenience, and I can access any file on Dropbox via the web browser or app on any desktop, laptop, tablet, or smart phone.

Limited upload bandwidth has kept me from syncing everything onto Dropbox

Thus you may wonder why I don’t simply shift everything I’m storing locally onto Dropbox. Bandwidth is one reason: my CableOne home internet connection’s upload bandwidth is only three megabits/second, plus there is a soft bandwidth cap of 300 GB of data transfer per month on my account. I use between 50 and 100 GB per month already, mostly downloads at 50 megabits/second for home video streaming of movies and podcasts, plus internet surfing. So it would be problematic to try and upload another 700 GB of data to my Dropbox unless I spread that out over several months.

I have considered shifting my audio files onto Dropbox, but those thousands of audio files are managed via the cumbersome iTunes, so shifting their storage location would cause some hiccups and trigger a long rebuild of the iTunes media library. Plus, the theoretical upload time would be about five days and overhead will make it still longer. However, the cloud helps me out in this area even without using Dropbox. Any MP3 files I purchase from Apple’s iTunes or from Amazon are always available in their respective cloud libraries, and I pay $25/year for iTunes Match so that all of my iTunes music, including the many songs I ripped years ago from my former huge collection of CDs, are available in the cloud. My infrequent local and offsite drive backups are sufficient to protect the old ripped MP3 files in my collection. I don’t worry much about my video files, either, because that collection seldom changes much. I’m relying more these days upon streaming video from Amazon for movies, and any movie I really want to hang onto I already own on Blu-Ray or DVD.

Finally, my photographs used to take up much more space, but I now use JPEGmini to optimize their compression, almost halving their size. All of my edited photographs are already on the online Flickr service up in the cloud, so I’m not worried about the infrequent local backups for them, either. Overall, the cloud has brought me a great deal of convenience and peace of mind on data storage and backup. While I’ve never lost any data over the decades, I have suffered through many disk crashes, and I’m very glad to now have solid state local storage plus cloud storage.

Computing in the Cloud

Google has long been associated with cloud services. I have used Google Docs, now re-branded and expanded as Google Drive, for many years. We’ve kept our science department curriculum maps there for convenient access and editing, and I’ve long maintained a spreadsheet about my day hikes using that service. I maintain a number of websites using Google Sites, since it is easy to update and customize without going overboard, and I’ve long enjoyed making custom Google Maps.

An Asus Chromebox has been a great machine for my mother

Google’s extensive cloud services have even made it possible for it to market Chromebooks and the lesser-known Chromeboxes. These units are really not much more than a web browser, but with cloud services from Google, Microsoft, Dropbox, and others, that is good enough to do a lot of basic computing tasks. Their huge advantages are low costs and maintenance. A decent Chromebook laptop only costs a few hundred bucks, and I bought an Asus Chromebox for my mother for only about $175. I hooked it up to her existing monitor, keyboard, and mouse, and she now happily does her web surfing, email, word processing, and spreadsheets on that simple unit. Her Google account includes 100 GB or more of storage on Google Drive, compensating for the extremely limited local storage on the Chromebox, which is used for buffering and offline access.

What is particularly nice about her using a Chromebox is that she is now virtually invulnerable to viruses and malware. Her last desktop machine, a refurbished Dell unit, was heavily infected by malware, which prompted me to consider the Chromebox as an alternative platform for her computing needs. Even if she somehow managed to get malware onto her Chromebox, which doesn’t seem likely, it is simple to wipe the system clean and start over, because all of her settings and files are always up in the cloud. That means I can access her files as needed, from Bartlesville or anywhere else, by simply logging into the appropriate service with her credentials. Since she is effectively using a web browser to do almost everything, I can see in my browser pretty much what she sees via her Chromebox, making it easy to troubleshoot and help her out with any issues. All of this is so much easier than trying to use Windows Remote Assistance to take over her computer remotely or paying for an expensive service like GoToMyPC.

Microsoft OneDrive is now quite compelling

Mom uses the free Microsoft OneDrive service, rather than Google Drive, for her productivity software needs. She was already using the traditional desktop versions of Word and Excel, and OneDrive gives her access to online versions of those applications, which do everything she needs, and includes a free 15 GB of storage. I’ve been paying $99/year for Dropbox for both her files and the ones generated by my father on his Windows 7 desktop machine, but they only have 4 GB of files on there. So when their Dropbox plan expires, I will just shift everything onto their free OneDrive and/or Google Drive accounts.

I’m actively using both my free school cloud-only version of Microsoft Office 365 along with home version, with its downloadable local Office 2013 applications. The service is well integrated with Windows and makes sharing PowerPoints and other documents a breeze. If I only used Word for word processing, I’d be tempted to just do everything in OneDrive and consider dropping Dropbox, but I still use WordPerfect for most of my student handouts (I greatly prefer its interface and model of word processing to that of Word), and I need to experiment to see if OneDrive would work easily with WordPerfect. Plus I like the Dropbox apps on my iPad and iPhone and the extensive integration of Dropbox with a variety of iOS apps, and I haven’t experimented to see how well OneDrive works on those platforms. Finally, Microsoft has re-branded and re-jiggered its cloud services so many times (Windows Live Folders became Windows Live Skydrive became Skydrive became OneDrive) that I want to be sure they’ve settled down into a steady and reliable mode before shifting my allegiance.

With our limited resources, Chromebooks and Chromeboxes make more sense for our local schools than do iPads

A Chromebox or Chromebook can do most things a student needs to do at school, so I am very glad our district is finally piloting some Chromebooks next school year. I hope we can shift to using Chromebooks and Chromeboxes in most classrooms and non-dedicated laboratories in the coming years. They would be far less expensive in capital costs and maintenance burden, although I expect we’ll still need traditional Windows machines for the business computing labs and science labs which use probeware. The biggest challenge may be training teachers to use cloud services instead of traditional desktop applications, but I expect students won’t have much trouble with that. If our district is ever going to reach the 1:1 student:computer ratio to revolutionize instruction, Chromebooks seem the best way to get there. We simply can’t afford that many iPads, and from what I’ve seen, managing iPads in the school setting can be difficult, time-consuming, and frustrating.

As for my own personal use, I love the iPad for use around the house, but I don’t find it as useful or compelling for meetings. I no longer use my MacBook Air much, and as it ages into obsolescence I am likely to replace it with a cheap Chromebook. That would be far less expensive and the maintenance-free aspect is very compelling. I can’t imagine not having a desktop machine for my work at school and at home, but my increasing reliance on cloud services means it will be that much easier to use a Chromebook for meetings and presentations.