A Manor for Two Meadors

The Manor That Is Not

I’ve always referred to my abode in Bartlesville as Meador Manor, but the name is simply alliterative fun, since my property is hardly a manor. A typical English medieval manor estate was 1,500 acres or about two square miles; my quarter-acre lot in Arrowhead Acres is about six thousand times smaller. And my residence is about 1.4% the size of Highclere Castle, the setting for Downton Abbey on PBS. That’s why I’ve been able to manage it on my own for the past 21 years without the 42 servants that Highclere Castle had in its heyday. Mind you, while I run the vacuum cleaner now and then, I certainly don’t dust enough to meet the standards of an Edwardian manor house. The lack of a gardener is also evident in how I’ve only kept one bed of hardy shrubs, Nandinas, and striped grass alive out front, and my typical yardwork consists of little more than 40 minutes of pushing a mulching mower over the fescue and bermuda grass…and picking up after the big messy River Birch in the front yard. 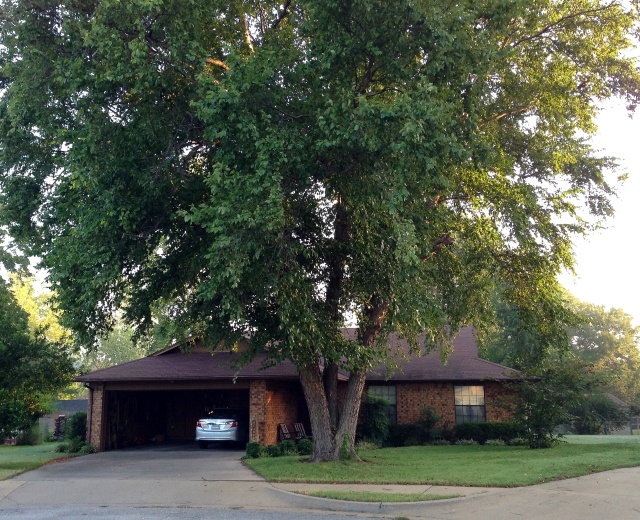 That’s Meador Manor, which would be a gatehouse at a real manor

Tulips around the mailbox

But in three months my bachelorhood will come to an end. Wendy has already started improving the back yard, which now has three rose bushes, including one in a raised bed we built. It is a certainty that she will be planting many more in the years to come. Last winter she planted tulips around the mailbox and by the porch, and they’ve been brightening things up around here. Recently she gave me a pot of marigolds to keep by the porch as well, knowing that while I love them, mosquitoes hate them.

But the yard is not the only part of the manor that is being improved. I’ve added some lights around the mirror and some additional cabinets in what will become her bathroom, and I’ve replaced the faucets for the bathroom and kitchen sinks with brushed nickel ones that don’t leak.

Lately we’ve been tackling the issue of clearing space for her clothes and other items. We’ve decluttered a wall of cabinets and drawers in the living room, which had already shed almost 400 CDs and DVDs a few years back in my digital downsizing project. This weekend we cleared out one of the two closets she will be using for her personal items.

The biggest unloading has been the study, which was built as the master bedroom. We’ve decided to keep it as a study, since we both do a lot of work from home and she needs a place for her crafts. But my study was loaded, and I do mean loaded, with books. Years ago I mounted shelves on three of the four walls which held over 1,150 books with another 100 or so stored in a closet. A few years ago I sold off and donated almost 200 books in the digital downsizing project, but there were still far too many old books in there.

So we got a bunch of boxes and went to work. In the end, we packed up over 700 books into a couple dozen boxes that I dropped off today at the public library. I’m down to less than 350 books total, so I’ve culled almost 3/4 of the collection, and now most of it fits into the beautiful wood sectional bookcases my parents gave me a few years back. The shots below compare 2001 to today. 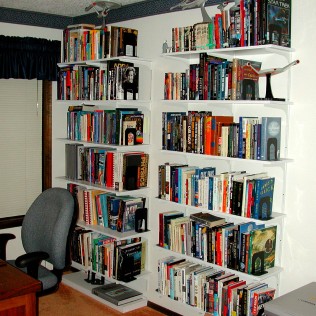 Some of the 33 bookshelves that once lined my study

Since I prefer to read novels on a Kindle these days, I didn’t mind getting rid of almost all of them, including hundreds of science fiction tomes. A few dozen favorites survive, including all of F. Scott Fitzgerald’s novels. I also rid myself of most of my histories on science, technology, and engineering, as I doubt I would ever feel the need to re-read them. But I kept everything by my heroes Stephen Jay Gould, Martin Gardner, and Carl Sagan, along with all of Bill Bryson‘s works, both hilarious and informative.

Part of my science fiction collection in 2001

Computer desk with big books, Starfleet, and other toys

My Star Trek book collection survives intact, and I used a couple of remaining shelves to house my fleet of U.S.S. Enterprises and other toys. If Wendy still had her Barbie collection, she says it would compete with my Enterprise fleet. All of the “picture books” with large plates of art and photography were kept, since the Kindle and its like don’t yet do such images justice. I also kept most of my books on music and movies as well as all the hiking and travel books. Some reference volumes, such as those on local history, were also retained.

Years ago a visitor remarked that my home’s decor was “stuck in the 80s”. Meador Manor was built in 1981 at the tail end of an oil boom that went bust. The decor of the home still reflects its origins. It still has wall-to-wall carpet that looks like you blended an orange with some salmon. When I took over in the mid-1990s, every window had metal mini-blinds topped with valances. I like the blinds, and have steadily replaced them as they wore out with identical ones, except for substituting light-filtering cellular blinds in the study for consistent soft daylight. Most of the original valances were vivid floral patterns, which I thankfully replaced years ago with dark solids. But the bay window in the dining room has always sported a country blue balloon valance.

I had to work on that valance once while cleaning it, discovering that parts of it were stuffed with 1981 newspapers. The dining room decor had the most shortcomings of any room to Wendy. She doesn’t care for the wallpaper, hates balloon valances in general, and we agreed that the chandelier needed adjustment. This weekend we took down the old valance and disposed of it, and wired the chandelier up higher to provide more headroom. The narrow pub table will eventually be replaced by a larger round table. The new look is more severe, which the round table will relieve a bit, and there is a lot more north light coming in now.

We also took down a Spanish Revival wooden conquistador spoon decoration which gave Wendy the creeps.

I don’t feel like I’ve changed the look of the Manor much over the years. When I repainted the exterior, I kept the color scheme the same, and on the interior I still have the original 1981 carpet, paint, and wallpaper. Many wall decorations have been in place for years. So is this place frozen in time? While scouring my computer for old photos for this post, I came across a set of 2001 inventory photos. I was surprised that more furnishings than I would have guessed had changed over the past 15 years; only a few major pieces are unchanged. Neither I nor my wallet were surprised to note that not a single piece of electronic technology is the same. The television, stereo, speakers, computer, monitor, printers, and scanner have all been replaced, and some are a few generations removed from what I used 15 years ago. So the Manor does evolve, and I’m looking forward to hanging on the walls some of Wendy’s art projects, which I admire, and I’m glad we’re clearing out the dust, cobwebs, and junk.

I’m clearly in the mood for change as I sneak up on my 50th birthday: I’ll be getting married and changing my job role in the coming years (more on the latter still to come). So cleaning up, clearing out, and updating the Manor, inside and out, is fine by me. Nothing lasts forever…and I’m very glad I’ll be sharing the Manor with Mrs. Meador in a few months.

I enjoy day hikes, photography, podcasts, reading, web design, and technology. My wife Wendy and I work in the Bartlesville Public Schools in northeast Oklahoma, but this blog is outside the scope of our employment.
View all posts by Granger Meador →
This entry was posted in books, gardening, home repair, photos, random. Bookmark the permalink.

1 Response to A Manor for Two Meadors