The first Sunday of Spring Break 2017 found me tramping down the spillway of Bluestem Lake while, 25 miles to the east, Wendy was at home building a new rose bed.

I had never visited Bluestem Lake before but had been intrigued by online photos of waterfalls along its spillway. A cold and overcast day in mid-March, with little rain of late, was hardly the time for waterfall photography. Yet I was eager to get out and walk about an area I had not yet explored. So I drove westward from Bartlesville on US 60 through a sleepy morning in Pawhuska over to Bluestem Lake, taking county road 4275 north from US 60 to reach the dam. 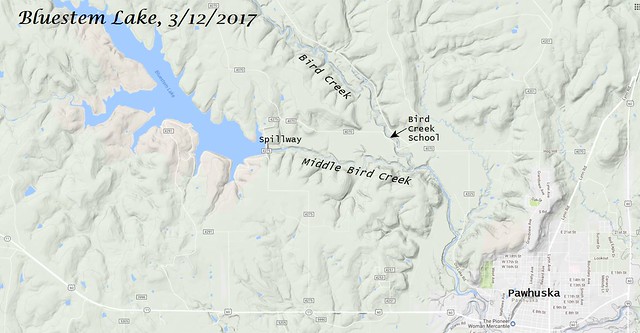 The lake was built in 1958 on Middle Bird Creek just before it intersects Bird Creek. That’s the same Bird Creek that traverses south Pawhuska and later flows past the Mohawk Park and Redbud Valley hiking areas in north Tulsa, 45 miles southeast of the lake. Designed as a secondary water supply source for Pawhuska, the lake also provides flood control and recreation. That recreation regrettably includes graffiti and beer drinking, with its inevitable littering, in the spillway area.

The spillway leading eastward from the dam was quite dry, with only a trickle of water coming in from a small stream to the north rather than the lake. There was a deep hole gouged in the limestone before the spillway made a sharp turn southward. When the water is up, this could be a dangerous swimming hole.

Deep hole in the spillway

The different bedding planes of limestone and sandstone were interesting, and there was a social trail running along the western bank of the spillway’s southbound channel, leading past a series of pools. One notable separation was by a large tilted plane of stone jutting from the earth and eroded by the water. 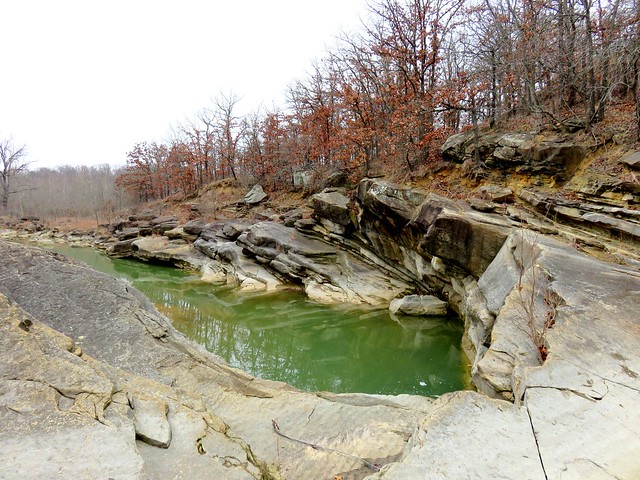 Along the southbound spillway

After I tramped about in the cold for awhile, I decided to drive away via the old lake road, now designated as county road 4070. It leads east over to Bird Creek, where it diverts south to make a crossing on a very old one-lane concrete bridge before turning east again to run to old US 60, now called Lynn Road. 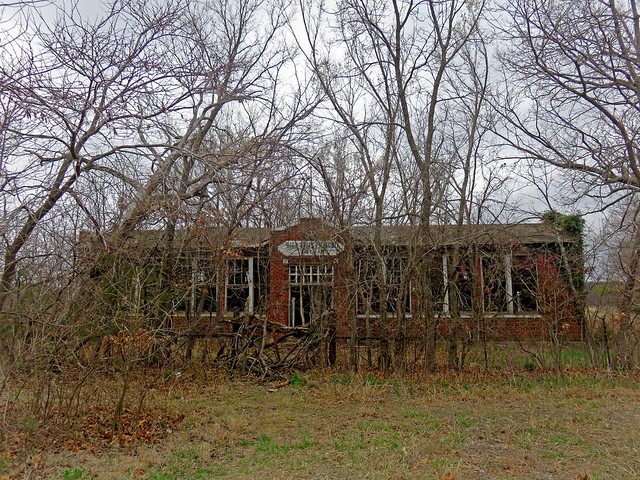 Where road 4070 encounters Bird Creek one will find the old two-room Bird Creek School, once in District 17. It is draped with ivy on its north and west faces, but the front east facade is still quite recognizable. Abandoned Oklahoma has some nice photos of the interior. The red brick building is 77 feet long and 25′ wide, with a stepped gable roof. It was built in the late 1930s by the Works Progress Administration. 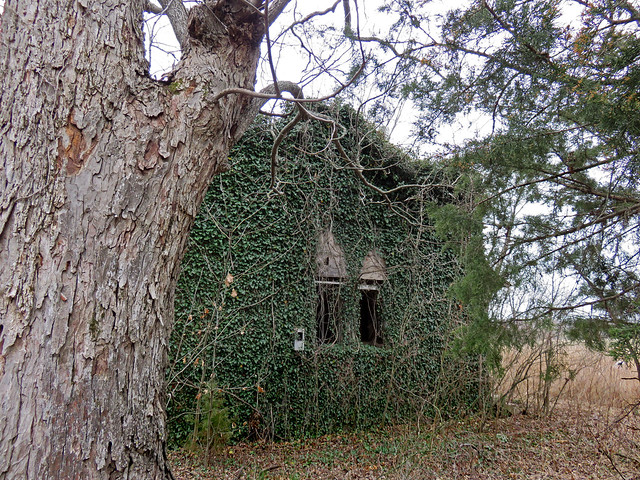 Silly tales that Bird Creek School is haunted claim that if you write your name on the chalkboard and later return to the school, you’ll find your name scratched off. A harsher reality is the continued deterioration of the little oil field boom towns of Osage County. The population of Pawhuska has fallen steadily since the oil boom a century ago, although the success of the Pioneer Woman Mercantile has brought an influx of visitors as of late. Barnsdall is still home to the Baker Petrolite plant, which was once the world’s largest manufacturer of microcrystalline waxes. But the town continues to decline, with a downtown of empty shells, an all too familiar sight to those who travel through rural Oklahoma.

My adopted home of Bartlesville, just across the eastern edge of Osage County, is another oil boom town, but it benefited for decades from being the corporate headquarters to Phillips Petroleum and, until the late 1960s, Cities Service. Bartlesville has managed to stabilize its population in the mid-30,000s for the past 35 years but has suffered a noticeable decline in its socioeconomics since the early 2000s when Phillips Petroleum merged with Conoco and relocated its headquarters from Bartlesville to Houston. The two companies later separated again, into downstream and upstream operations, and each retains a large corporate presence in Bartlesville, but the headquarters remain in Houston.

Change is hard, especially amidst decline. But Bartlesville is proof it can be navigated, something I’ll discuss in a later post. Meanwhile, Wendy and I are grateful that Spring Break has finally arrived. We are headed to Beaver Lake in Arkansas to relax for a few days, giving us time to pause and reflect about all of the changes underway in our lives.