One of the most popular pages on MEADOR.ORG is the one about the Pathfinder Parkway. Today I received an interesting comment from Bob Curtis:

Hopefully you can help me out. Back in the 50′s/60′s, was there a large asphalt race track located between Tuxedo Ave and Frank Phillips Ave, just about where the orchard is located? I have asked many people about this about this and have always got a no, but I could have sworn that my Dad took me by there one time when I was a kid and showed me it. I believe he said it was not used very often.

First I went to the USGS Store’s interactive map and found the 1971 topographic map for Bartlesville. It did not show anything but the orchard between Frank Phillips and Tuxedo, but it did indicate a small oval track north of Tuxedo, located between the sewer plant and the cement plant. (You can click any of the images in this post to enlarge them to their full scale.)

The 1971 topographic map did show an oval road or track, but north of Tuxedo, not between Tuxedo and Frank Phillips.

Could that be what Mr. Curtis was recalling? I needed some photography to check that out. My next stop was the USGS Earth Explorer where I zeroed in on the same area looking for old aerial photographs. This was more difficult, but I did find imagery of the area from 1954 and 1971. Here’s the area in 1954: 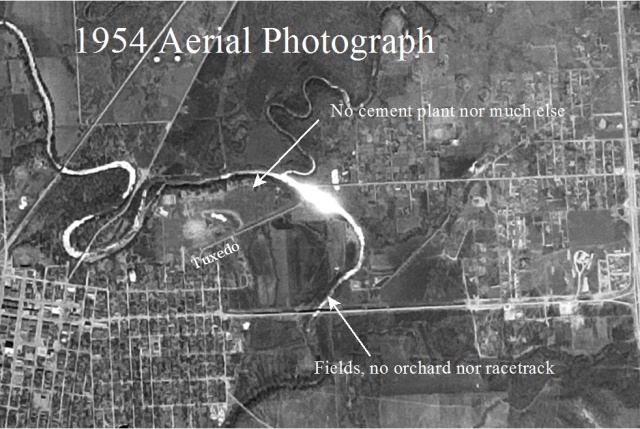 In 1954 there was no orchard, no cement plant, and no racetrack, either.

So in 1954 there was definitely no race track anywhere around there. Instead of an orchard and Blazer ball fields, there was just a farm field. But in 1971 there definitely was some sort of oval track just west of the cement plant:

In 1971 there was a small oval track north of Tuxedo between the cement plant and the sewage plant.

That’s not a huge track, but it is about half a city block in length and bigger than a baseball field. So to a kid 50 years ago it probably seemed much larger than it looks here. Here’s a zoom in on it: 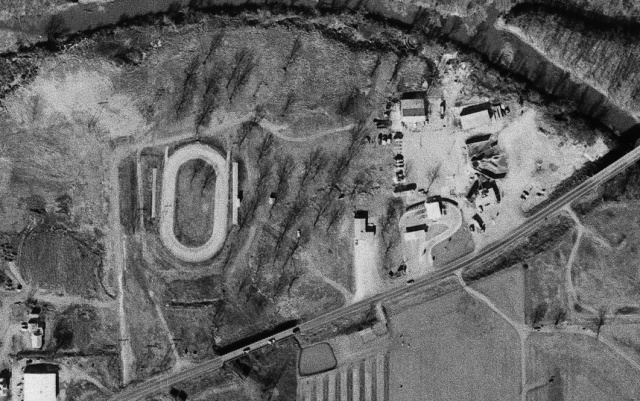 Zooming in on the suspect racetrack.

Hmmm. Perhaps bleachers on either side? Now here’s the same area today:

So the area in question is still a clear space, with visible tracks, surrounded by the Pathfinder on the north, the house and field where the horse lives on the west (with the sewage plant farther west of that), the cement plant on the east, and Automasters to the south. I suspect Automasters takes cycles or other vehicles out for a spin on that land.

Here’s a big zoom of the area, showing that the oval thing-a-ma-bob was located just south and east of my favorite bench on the Pathfinder, where I like to sun myself and watch the horse that lives just south and west of there.

Zooming in on that area today.

So I think there was indeed some sort of track there at one time and that is probably what Mr. Curtis recalls from his childhood. I’ll encourage him to go inquire about it at Automasters…they may know something about it. I’m impressed once again by what one can find on the internet if you know where and how to look.

Supervisor/Flagman + a membership of 25 people.

Quarter Midget racing for children was added later. The inter-club competition heats were held on Sundays at the track at the north end of Quapaw. The local track was constructed in 1960 and named “Phillips 66 Speedway”. I do not know what was used prior to this date. I assume they went to other tracks until they could afford to build one.

The opening race was on Friday Aug. 21, 1960. It was quite an event. The most well-known entry was Marty Robbins from Nashville, Tenn. Yes, the country and western singer. On Saturday he was leading the race when he was involved in a crash. He was not hurt nor were the other two drivers. Kenneth Coonfield won the race in the twin-cylinder Konigs class.

There was an International Championship race held on Aug 19, 1961 with some 150 racers. The prize purse for the event amounted to a whopping $1,500 total. It made it into the major Oklahoma newspapers.

3/18/2012 UPDATE: I walked the Pathfinder a few days after this post to locate what remains of the speedway. The asphalt track is entirely gone, with just a bit of concrete poking through the overgrowth in one area and then there are the overgrown remains of the west and east stands.

This post continues to get traffic, and Rich Scaler has kindly shared some great photos he found in a garage sale. 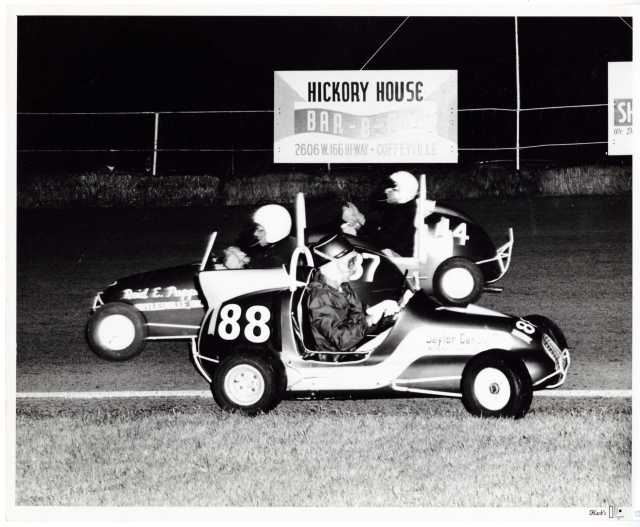 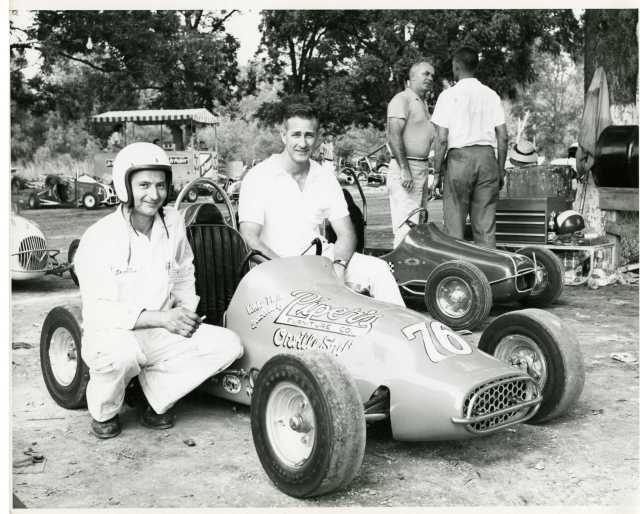 Orville Sheline and Bob Radabaugh in 1964-65

Coming around the curve 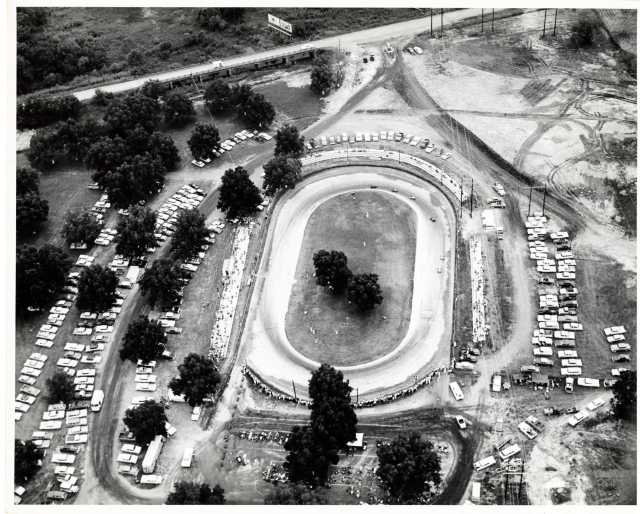 Aerial view of a race

27 Responses to The Forgotten Racetrack?