The summit of our state (click image for slideshow)

On the second day of my adventure in northwestern Oklahoma I awoke late in my Guymon hotel room, had the hotel breakfast, and began the lonely 60 mile drive due west to Boise City. As pronounced locally, that rhymes with voice. The town’s dubious start was as a 1908 scam by developers J. E. Stanley, A. J. Kline, and W. T. Douglas, who promoted the town as a tree-lined city of paved streets, thriving businesses, railroad service, and an artesian well. The buyers of 3,000 lots would discover that none of that was true, so the scoundrels went to Leavenworth Federal Penitentiary while the suckers stayed on. The town is the birthplace of actress Vera Miles (who portrayed the sister of Janet Leigh’s Marion Crane character in Psycho) and Boise City is the only city in the continental United States to have been bombed in World War II. 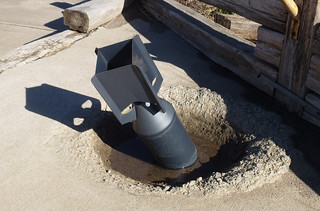 No, the Axis Powers did not penetrate to the heartland to attack No Man’s Land. The U.S. did the bombing, by accident, when the crew of a B-17 Flying Fortress on a training mission mistook the city lights for the target field and dropped six sand-and-powder bombs on the unsuspecting populace. No one was hurt, but they blew out some windows in the Baptist church and took out the roof of a garage, causing $25 in damage. Fifty years later the chamber of commerce erected a small remembrance of the event and invited the plane crew, who went on to participate in successful bombing raids on Berlin, to attend. But they declined, to a man.

Can’t blame them, really. Boise City isn’t the most congenial destination. It has recently endured the worst draught since 1908 and is the seat of Cimarron County, which has lost over 20% of its population this past decade. There are only 1.3 people per square mile in this cruel corner of Oklahoma, which explains why Boise City School District No. 2 covers an astonishing 888 square miles.

I did not linger long in Boise City, determined to cover the 40 additional road miles to Black Mesa, the highest, coolest, and driest spot in Oklahoma. My friend Jeff and I tried to hike here about a quarter century ago, but we had no information to go by except a road map showing a state park. We mistakenly thought Black Mesa State Park would be at Black Mesa – that seems logical, does it not? But we found to our chagrin that the mesa itself is 8.5 miles northeast of the park. If you want a small lake, go to the state park. If you want the mesa, go to the Black Mesa Nature Preserve. There is a great online map of the preserve these days. Its 1600 acres were acquired by the Nature Conservancy and protects about 60% of the mesa top in Oklahoma. But a quarter century back Jeff and I had no maps and ran out of daylight. We only managed to reach lonely Kenton, Oklahoma just south of the mesa before dark. We wound up driving many hours in New Mexico, searching for a hotel room on a Labor Day weekend when every room was booked due to a racing event, and never made it to the mesa.

That unrewarding experience prevented me from ever returning until now, motivated by my day hiking and photography hobby. Dim unpleasant memories were revived by the dreary drive, with more contrails in the sky than cars along the road. On the south side of the mesa was a long building of false fronts, which I would guess is an unfinished hotel. I parked at the trailhead, with four hikers heading out ahead of me down the 4.25 mile trail to the obelisk up top marking the state’s highest point. 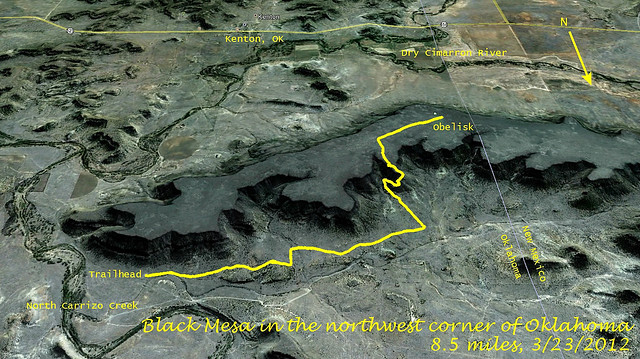 Helpful green arrow markers guide you along the flat part of the trail as you hike westward below the north slope of the mesa. This is definitely fly-over country: the sky was crisscrossed by contrails. A welcome bench was found about 1.25 miles into the journey. The scouts who built it took creative license and called it the Mile 1 bench and placed it at the edge of a dam which held back no water. A woodpecker had built a home in the adjacent tree, a rarity in these parts.

During the next mile a clearly visible gash in the side of the mesa showed where the trail had been cut to the top, about 500 feet above the floor where I was treading over to the Mile 2 bench. A spill of black basaltic rock from the top edge of the mesa gave proof of how it acquired its name. I passed an intriguing set of large white boulders as I began the climb towards the mesa top, in an environment too tough even for some of the cholla cacti. I passed layer after layer of different rock with an expanding view back along a wide gully. Large rocks showed outgassing from their volcanic origins: the black mesa top is Raton basalt of a lava flow which originally filled a river valley in the Pliocene age millions of years ago. Later erosion exposed it and weathered down the older lower layers, leaving the flat mesa top towards which I was bound. 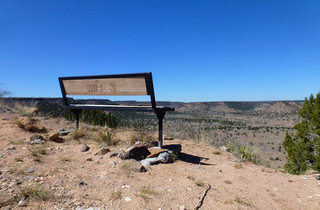 I climbed to the Mile 3 bench and enjoyed the view, with mesas dotting the plains to the north. As I approached the top, the layer cake nature of the mesa was clearly visible. I reached the top, enjoying a tremendous view to the north along a wide rift. I shot a panorama and noted the eponymous black basalt spilling from the mesa’s edge. The track led across the flat top of the mesa towards the high point. I passed spiky plants with sharp quills and dried-up pods. One of the few remaining trail badges up top told me I was only 0.3 miles from the summit. 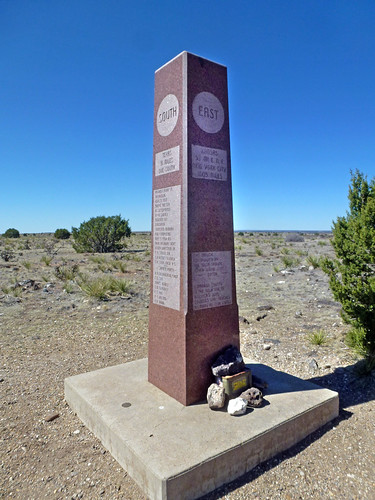 Soon the granite obelisk marking the summit, situated 4,973 feet above sea level, came into view. Several hikers were relaxing on a nearby bench. That came in handy, as we were able to take photos of each other. The granite obelisk was funded by Tulsa Tribune editor Jenkin Lloyd Jones, replacing an earlier one erected in 1928. I photographed its south and east sides, then its west and south sides, and finally its shadowed north face. I did not bother to sign in on the visitor books in the strongbox at the base of the obelisk, but instead relaxed at the bench kindly provided by Woodward’s Boy Scout Troop 251 before retracing my journey.

The sharp edge of the mesa makes it look like the road ends in a void, which it does, in a way, with a sweeping panorama. The trail cut brought a belt of sandstone protruding from the prairie into view, and a distant mesa had a very different thick hard layer forming its top. Down on the flat a survey team drove past on their 4-wheelers, stopping to check if I needed any water. I thanked them but declined and trod slowly after them, finally reaching the car to end the 8.5 mile trek. Golly, I’d hate to do this hike in the summer!

I popped down the road a few yards to stop and view some dinosaur tracks visible in the bed of North Carizzo Creek, which looks like a wide ditch. Silt meant I could only locate one of the three sets of tracks near some concrete reinforcement in the creek bed. Upstream trees struggled to survive along the creek bank in this hostile environment. More than eighteen tons of camptosaurus, stegosaurus, brontosaurus, diplodocus, and edmontosaurus bones have been quarried in this area of the Panhandle, revealing it to once have been a lush swampy forest – a far cry from its current dessicated state.

I then drove through Kenton, which is almost a ghost town these days with no businesses left in operation. It wasn’t long before I was in New Mexico and I promptly turned heel and returned across the dry headwaters of the Cimarron River. The setting sun behind me created a wide bank of pink across the sky which slowly rose, widened, and faded along the journey eastward toward my hotel room in Guymon. There I would discover that while my sunscreen had protected my nose, forearms, and the back of my neck, I really should have spread some around the front of my neck as well!

On the next and final day of my trip I would journey back along the Northwest Passage towards Oklahoma City, with a notable stop in Shattuck.