The day after our hike on Mount Magazine, I had breakfast on my own, returning to the room to work on orders for a school grant while Wendy relaxed with funny videos on her iPad. I enticed her to go for a “short walk” on the Old Lodge Trail just off the new lodge’s patio. It wasn’t a very long trail, but it made a steep descent down the hillside then headed east through overgrowth before a steep ascent back to the cabins east of the new lodge.

Mount Magazine After the Great Depression 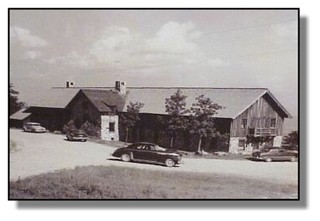 The peaceful era of the early settlers on the mountain ended with the Great Depression of the 1930s as farms wore out, the stock market crashed, and people had no money for leisure. Most of the land on the mountain was turned over to the government because of unpaid taxes during this time. The Greenfields were the last family on the mountain, and they were forced to leave in 1936. That same year, the Works Progress Administration (WPA) began building a road across the mountain, linking the towns of Havana and Paris; it is now the Scenic Byway 309 one uses to visit the state park.

The Forest Service took over the mountain in 1938, and the WPA built 18 cabins on either side of a lodge, which was a two-story building with 26 guest rooms, a kitchen, dining room, and a stone patio with a wonderful view of the Petit Jean River Valley and the Ouachita Mountains. That lodge burned in 1971, and visitors to the mountain declined. A new state park was authorized in 1983 but did not open until 1998. From 2004 to 2006 the new lodge and 13 cabins were built just above the location of the former structures.

Wendy and I could find no traces of the former lodge amidst the overgrowth along the trail, which led down to a bluff line, which it followed for awhile before leading back up. Trails with big elevation changes were not welcome after the trek of the day before, so we opted to take the nearby drive at Cameron Bluff to various overlooks. 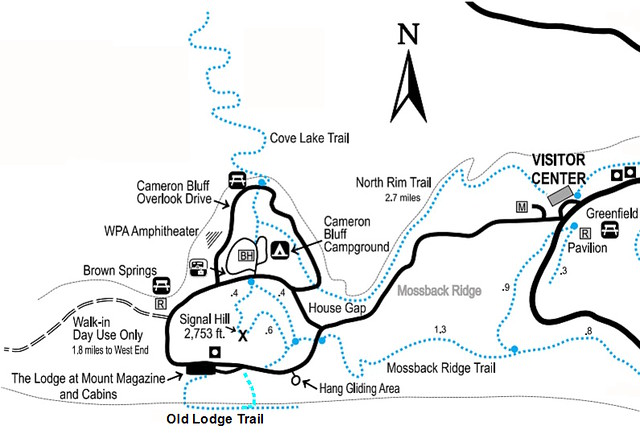 After the Civil War, Confederate veteran Thomas Rush Cameron moved his family from Georgia to Arkansas. For a while, they lived near Chickalah, south of Dardanelle. Cameron was advised to seek a higher elevation to help his wife’s respiratory condition. One day while bear hunting on the mountain, he discovered a flat, fertile area above a peninsula of bluffs that overlooked the northern slope of Mount Magazine. His family established a homestead on what is now called Cameron Bluff. What is now a heavily forested modern camping area was once farm fields and orchards. The magnificent background above the bluffs created a romantic site for weddings. The first known wedding held there was that of Lois Cameron to Daniel McGuire, and this scenic setting is still a popular site for exchanging vows.

Cameron Bluff drive opened in 1967 and is a one-way loop around the perimeter of the former farm. The main overlook is tremendous and features a dramatic series of steps on one end, where we happily posed. To the side one can view the towering layers of rock. 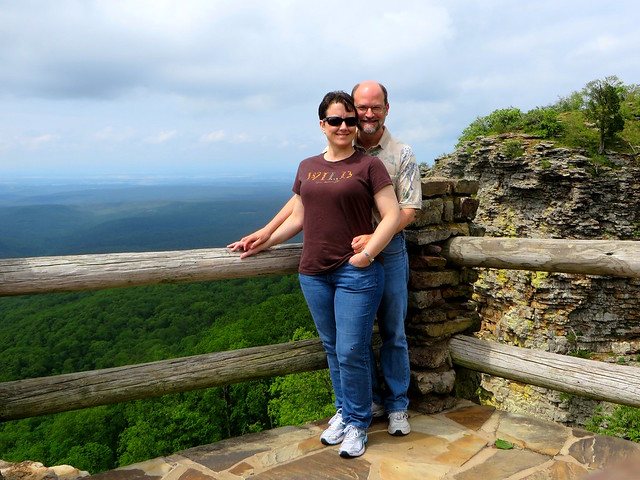 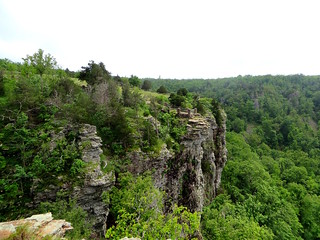 Then we drove to the nearby remains of an amphitheater built by the Civilian Conservation Corps for sunrise services. A social trail on one side led to a precarious overlook where we could look across the gap to the steps where we had been a few minutes before.

Our final stop on the bluff was an overlook featuring a stone gazebo and signage to help identify landmarks. We could see the lower wall of the amphitheater on the edge of the bluff to our left. 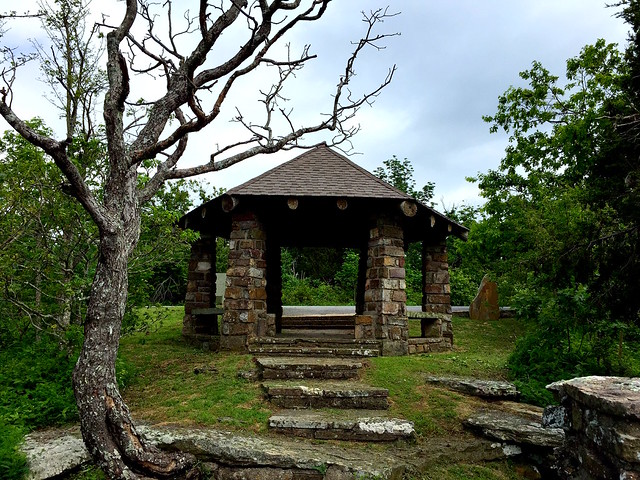 We drove over to the Benefield area at the park’s southeastern edge, with Wendy enjoying seeing deer by the roadside. In 1880, Benjamin Benefield was granted title to 160 acres of land. The Benefield family’s first home was a log cabin with a lean-to kitchen. Later a two-story house with four upstairs bedrooms was built. The Benefield’s seven children helped to clear and farm approximately 40 acres of onions, turnips, potatoes, an apple orchard, and vineyard. A grave near the entrance to the park’s picnic area is the final resting place of one of the Benefield children, and the CCC developed picnic and camping areas here in the late 1930s, but they were abandoned in World War II and not revived for decades. On a later visit to the mountain, I will take Wendy hiking on the trails around this end of the park, including the shorter CCC-built East Loop and longer Bear Overlook Trail and Will Apple’s Road. 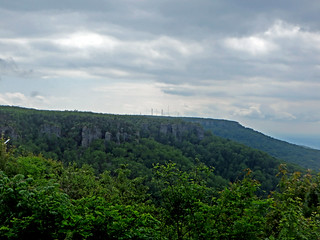 We then drove to the opposite end of the mountain, the area called Brown’s Spring. It was settled by Benjamin Brown, a farmer who made extra money by supplying tourists with mules to ride. His two sons settled adjoining land to the west. Someday I’ll take Wendy along the unofficial trail leading west along the north rim of the mountain here over to the antennas which dot the western tip of the mountain.

We were spent for the day and returned to the hotel for a nap and a dinner featuring tasty Baby Bear Burgers and a shared slice of Possum Pie.

The next day we would head east to Russellville and Mount Nebo.