After our recovery day at Mount Magazine, Wendy and I moved mountains…we were the ones moving, of course, instead of the mountains themselves. We shifted from Mount Magazine to Mount Nebo, which is an hour’s drive to the east. I’ve been to Mount Nebo a handful of times, staying up top for the first time during Spring Break 2014 with Wendy in Cabin 61. That rustic cabin has a wonderful southwest view from the edge of the mountain, so we booked it for our return. We’d need some food to cook during our stay, since there is no restaurant up top. So we headed to Russellville, located a 20 minute drive just east of the mountain across the Arkansas River.

We enjoyed a final breakfast at the Skycrest Restaurant and packed out of the lodge by 11 a.m. Scenic Byway 309 would take us down the southeast end of Mount Magazine, and we stopped there at the overlook of the Petit Jean River Valley. It is just across the road from the Benefield area. A turkey vulture was wheeling around the sky above the valley, with Blue Mountain Lake in the distance. 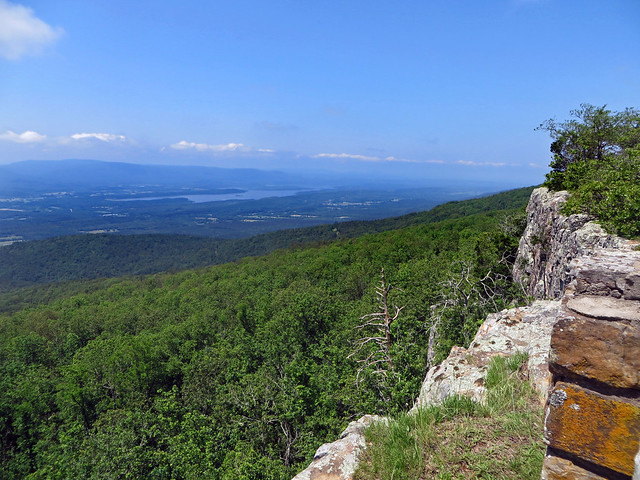 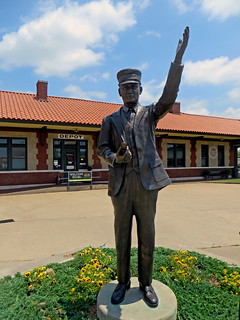 We drove across the swollen Arkansas River at Dardanelle, noting how it had filled its banks with the record May rainfall in Oklahoma and Arkansas. I’d hoped to tour the old Missouri-Pacific Railroad depot in Russellville, but it was closed. Mr. Conductor was out front, sculpted by Jim Westbrook, greeting us nevertheless. We decided to walk around the revitalizing downtown district, buying some bottled pop and medicaments at an old-style pharmacy shop and relaxing on a sidewalk bench.

Earlier I’d noticed a restaurant across the tracks, called Stoby’s, had a parking lot packed with cars. It had a train theme, and occasionally someone would pull the steam whistle out front. So we walked across the tracks to enjoy a French Dip and a Chicken Salad Pita while large-scale model trains travelled overhead. I happily sounded the whistle as we left. We stopped at a bakery next door. Wendy purchased yummy cookies and Wedding Cake cupcakes, which were almond flavored, white cakes with white icing, candy pearls, and raspberry filling.

We tried to get back across the tracks to reach our car but were stymied by a stopped train. It was stalled on the tracks, blocking all of the downtown intersections. We wandered about, finding shade beneath a tree as I examined online maps to verify there were no pedestrian viaducts we could use. Wendy laughed at our backlot surroundings, accented by a used syringe lying in the grass nearby. But she later said she especially liked this unplanned break in the day, with us chatting as we waited almost half an hour for the train to get moving and clear the tracks.

Even with that delay, we had some time to kill before we could check into our cabin up on the mountain. So we shopped at an old-style Ace Hardware Store, with many narrow aisles filled with merchandise from floor to way overhead. The wealth of merchandise reminded me of the old Johnston’s store in Cassville, Missouri, where their motto was, “If you can’t find it, we haven’t unpacked it yet!” The store manager was a character too, commenting about one of his employees, “He’s the south end of a northbound mule.” 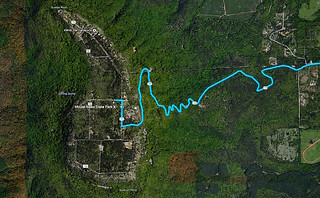 We then stopped at the Harp’s grocery in Dardanelle to pick up food for our stay. The kindly old cashier there was funny, too. She asked where we were headed, and when we said we were staying up on Mount Nebo, she exclaimed how she had lived in the area her whole life but had never gone up the mountain, since she hates heights. What a contrast to my love for a high panoramic view, which would soon have us ascending the mountain along the hairpin curves of highway 155.

The clerk at the park office remembered me as I checked us in. We made our way to Cabin 61 to unload supplies, with Wendy spotting deer along the way.

The view near our cabin

The view was spectacular from the cabin’s perch on the mountain rim.

Our cabin on Mount Nebo

Sadly, I had to spend part of the afternoon coordinating grant purchases on my laptop computer, which I tethered to my iPhone for internet service. With that accomplished, I eagerly headed out for a short hike while Wendy relaxed with her iPad, recovering from a headache, the result of painful, swollen bug bites on her scalp from a previous hike. 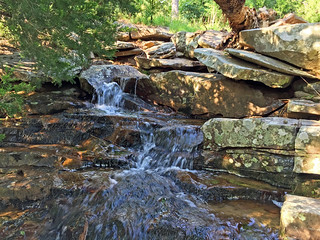 I walked north along the Rim Trail from our cabin to the waterfall, which the clerk at the park office had said was in good flow. Back in the 1930s, the CCC built a trail alongside the waterfall cascade. They used only hand labor and mules, setting stones that weigh as much as 500 pounds. Their hard work so long ago allowed me to make my way down from one level to the next, taking photographs and shooting video clips. I followed the trail back and forth, reaching the big lower falls where the trail passes behind the cascade. 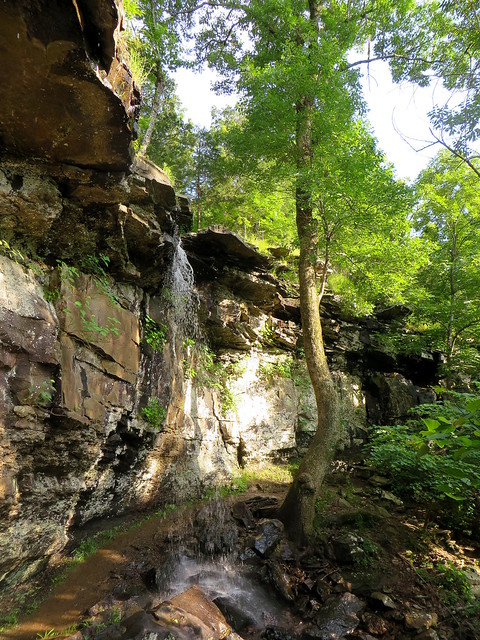 The cool mist was welcome as I watched the water run onward to be lost in the woods below. The beautiful trail led around to a large rockfall I remembered from a previous hike. It was warm, so I did not go all of the way down to Gum Springs, instead turning around for the arduous but invigorating ascent back to the mountain rim. 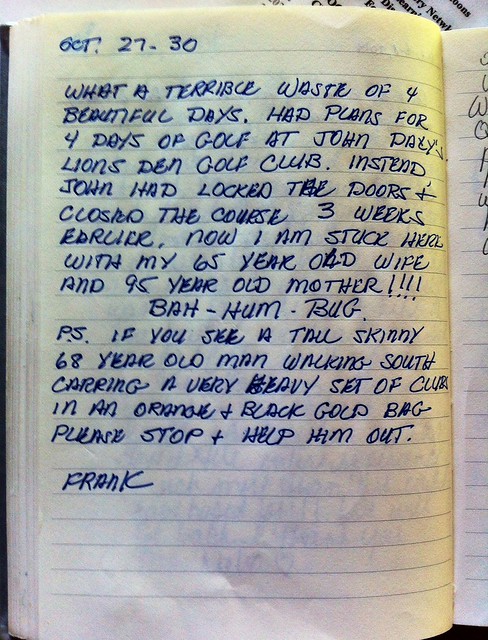 The Woes of Frank the Golfer

I was quite hot when I returned to the cabin, stripping off my shirt to cool down on the patio and enjoy the vista. Wendy joined me to relax in the sun and the cool breeze. Dinner was hot dogs and ice cream, with Wendy sharing some of the rap music of Eminem and Busta Rhymes. She had her work cut out for her, as I can’t stand most rap.

We perused the cabin guest book, finding our entry from March 2014 and relishing a hilarious entry Wendy found from Frank the Golfer.

Our next day would be spent on the mountain, featuring a longer hike along the Rim Trail around to Sunrise Point.