Over the decades I’ve stayed in a wide variety of hotel rooms: dirty and dreary, cheap and clean, elegant and expensive, and other combinations. For our winter break, I opted to book rooms for Wendy and me that were above standard grade but not over-the-top. So instead of the Best Western-style mid-range rooms I’ve usually booked for our vacations, I looked for properties with some outstanding locations or features and booked small suites rather than single rooms. Our favorite room for the trip turned out to be the King Executive Suite at the Omni in Corpus Christi, high above the shoreline of the bay with separate small balconies for the living area and the bedroom. Wendy kids me about my fondness for vistas, and the room provided a nice panoramic view to the north of the Harbor Bridge and the USS Lexington. 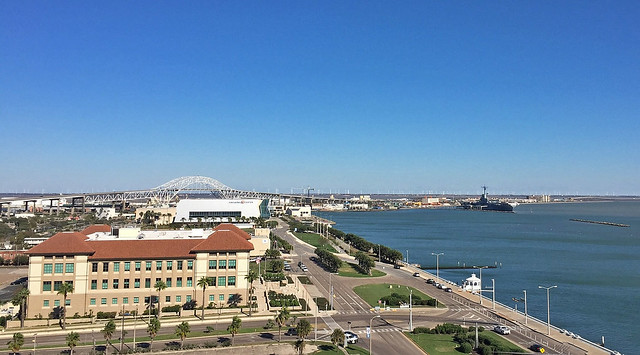 Corpus Christi View from the Omni

We arrived after sundown and were tired from the long and dull drive from Austin. So we had dinner at the hotel’s Glass Pavilion restaurant. We celebrated our arrival at the coast with seafood: I had a decent fish and chips, although it was nothing like what you can get on the pacific coast, while Wendy enjoyed most of her crab cake. I suppose we should have had shrimp if we really wanted local cuisine. We were amused by a couple near us who asked a nonplussed waiter snooty questions about the origins of the food. They really should have headed to the Republic of Texas restaurant on the top floor of the hotel for that kind of dining experience.

Up on the Bluff

The next day was bright but chilly, starting with yummy french toast, fancy syrup, and bacon from the friendly room service. Later we ventured out for lunch, walking alongside the bay to the aptly named Shoreline Sandwich Company a couple of blocks south. We discovered it was closed for renovations, but its sister location four blocks east was open. So we perambulated inland, climbing up to North Upper Broadway Street, which runs along the city’s bluff above the bay area. Our sandwiches were good, as was the people-watching. 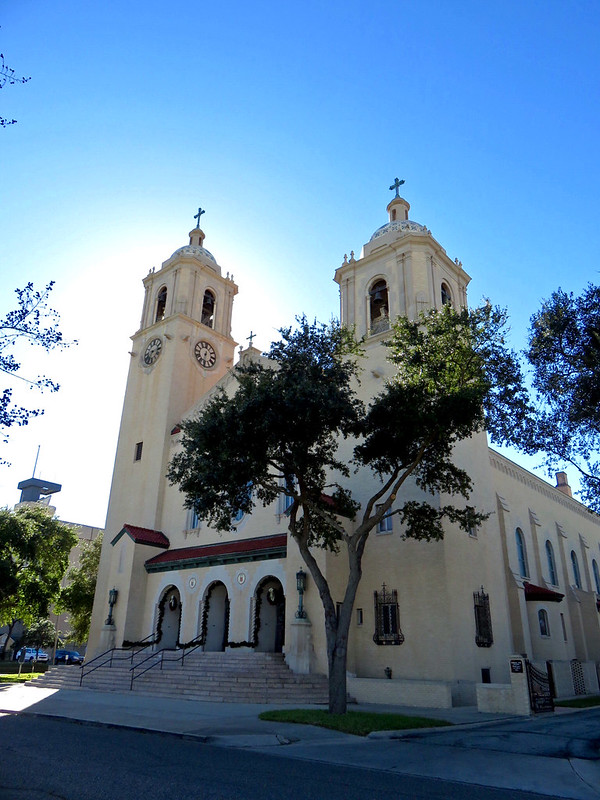 Back on Broadway, I noticed a cathedral a few blocks south, so we walked by for photos. The Corpus Christi Cathedral is an appealing edifice, with both a 97-foot bell tower and a 125-foot clock-and-bell tower which are each adorned with pretty glazed terra cotta domes. It was designed by C.L. Monnot of Oklahoma City, who designed a little version of it as Corpus Christi Catholic Church in my hometown. 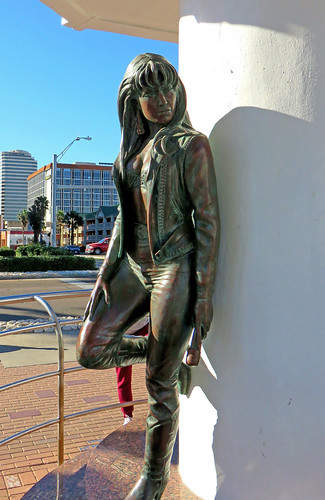 Down by the Seawall

We then descended the bluff to walk along the shoreline, noting how various electrical boxes have been adorned with fun artworks. In the early 1990s, the city built eight beautiful gazebos along the seawall, called the Miradors del Mars, or sea watchers. There is also the Mirador de la Flor, or overlook of the flower, built to commemorate Selena Quintanilla-Pérez, the Tejano singer who was killed in the city by a business partner back in 1995. A large white rose sculpture recalls her nickname “The Flower”, and she is represented by a life-size bronze statue, complete with bustier and microphone. The lower seaside section of the mirador has hand-painted floral tiles.

The Mirador de la Flor is at the entry of the People’s Street T-Head, which projects out into the bay with sailboats, stores, and restaurants. Wendy and I enjoyed the Laughing Gulls resting on the pilings, along with the varied accents of the mariners, which Wendy said sounded like Karl in Slingblade. 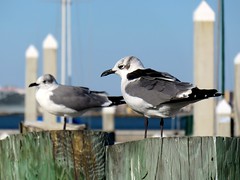 Dinner was at Thai Spice. The couple operating the restaurant were very sweet, and we enjoyed our dishes, which were artfully cut and arranged.

The next day we checked out of the Omni and drove to the Padre Island National Seashore before we headed to San Antonio. Back in college I would hear students say they were “going to Padre” for Spring Break. Being repulsed rather than attracted by the crowded mayhem of wild beach parties, I didn’t pay much attention. So I was a bit puzzled by my first impression of Padre Island. It lacked the wide beaches and development I was expecting; only later did I realize “going to Padre” for Spring Break meant the town of South Padre Island, which is on the opposite end of the island from Corpus Christi. Since it is the world’s longest barrier island, it is almost a three hour drive from Corpus Christi to reach the party beaches down south. And you have to drive there on the mainland, as 70 miles of the island is undeveloped and protected. 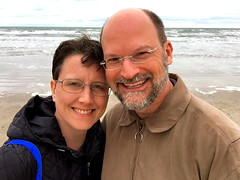 The relative calm and lack of extensive development suited us just fine. We drove to the visitor’s center at Malaquite Beach, donning both beach shoes and jackets before we walked past the vegetation onto the long sandy beach. There Wendy delighted in scouring the shoreline for seaborne treasures. I enjoyed the immensity of the ocean before us, with its swells and crashing waves. Some willets entertained us as they dug for food in the sand, and occasional flocks of birds flew in formations overhead.

Wendy had only been to an ocean once before when she briefly visited a foggy beach in Galveston, so this was a special treat for her. We did not stay but for an hour or so, and she said she could have stayed out there for days searching for unfamiliar treasures. But we had to get to San Antonio, so I steered us to Corpus Christi for a late lunch at Five Guys Burgers, which we both enjoy. I assured Wendy that she will again get to explore beaches on our summer honeymoon in the Pacific Northwest.

The drive to San Antonio was through afternoon mist and rain, with us arriving in the crowded downtown area at nightfall, slowly threading through slow pedestrian and car traffic to the Emily Morgan Hotel adjacent to the Alamo. Our stay there is the subject of the next post.