Our penultimate stop for Winter Break 2015 was a return, after two years, to the River Walk area of San Antonio near the memorable Alamo. This time, instead of staying at a hotel east of I-30 and having to walk several blocks to reach the Alamo and the River Walk, we splurged on a second-floor room at the Emily Morgan Hotel, overlooking the north wall of the Alamo. I chose that venue for its prime location and architectural interest.

The Emily Morgan, now a Hilton Doubletree hotel, is a 13-story flat-iron building. It is a major contributor to the shock that greeted me, like many others, upon first seeing the fabled Alamo. When I first visited San Antonio in 1984, I was expecting the Alamo to be an old fort/mission out in the desert, with images from the 1960 movie by John Wayne in my head. So I was flabbergasted to find the iconic building dwarfed by skyscrapers crowded around what is left of its footprint. The 13-story Emily Morgan building, with its front door 13 steps from the north edge of the Alamo, was built in the 1920s as a medical building. Back then it was filled with 400 doctors’ offices, a 50-bed hospital on the top floor, and a morgue with crematorium. It became a general office building in the 1970s and then a hotel in the 1980s. In 2012, $4.5 million was spent renovating it into a 177-room Doubletree by Hilton.

Emily Morgan is sometimes called the Yellow Rose of Texas

While the building had always caught my eye whenever I visited San Antonio, its name carried far more meaning for Wendy, a native Texan, than it did for this Okie. Emily Morgan is a misnomer for Emily D. West, a free black of mixed race who was born in Connecticut and contracted to work at a hotel at Morgan’s Point, Texas in 1836. She was captured by Mexican cavalrymen and was in the Mexican camp during the decisive Battle of San Jacinto. A myth arose that Santa Anna was caught unprepared by Sam Houston’s forces because he was preoccupied by a dalliance with Emily.

Later this was amplified by mid-20th century claims that she fit the description of the girl in the blackface minstrel song The Yellow Rose of Texas. I was unaware of the song’s history, as I’d only heard it a few times, and then in the sanitized cowboy versions from Gene Autry, Roy Rogers, or Ernest Tubb. Mitch Miller’s version of the song, which portrayed it as a Confederate marching tune, was once quite popular. Personally, if I’m going to listen to a Texas song, I’d rather listen to Bob Wills’ western swing version of Deep in the Heart of Texas, or clap along with Gene Autry on it; even Pee Wee Herman knew about that. 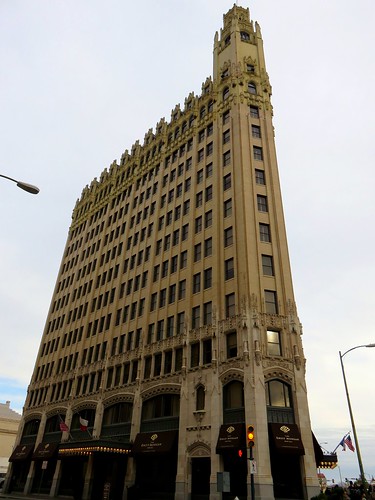 Neogothic Architecture of the Emily Morgan

The Emily Morgan hotel interested me more for its architecture than for the historical connotations of its name. The building is a very tall V, with rooms trailing back from the point, and we secured a second-floor room at the point, directly above the lobby. Thankfully, the very point itself was the bathroom, providing auditory insulation from the tourists on the streets below. It had a huge frosted window beside a bathtub which could produce “champagne” bubbles. In the living area we could look down from an arched window and see tourists snapping photos in the north yard of the Alamo.

The building’s Gothic Revival exterior features carvings and grotesques appropriate for its origins as a medical building. An old crone and a fellow holding his tongue and his head adorn the doorway, and there is a caduceus, the winged staff with entwined snakes, to symbolize the medical arts. 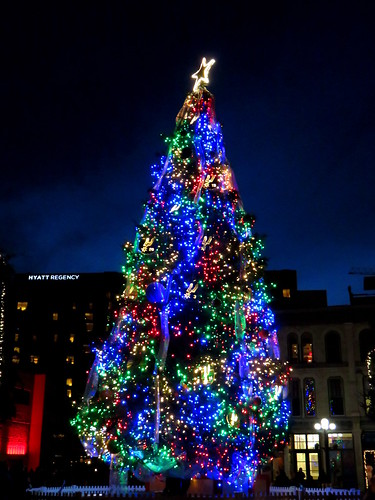 We were just steps from Alamo Plaza, so I stepped out one night to capture photos of the lights in the trees, the Emily Morgan rising up into the sky, and the beautiful Christmas tree, which came complete with boot spurs. I took the opportunity to snap some photos for folks struggling to compose family shots in front of the tree and the old mission. People are uniformly grateful when a friendly stranger offers to help out so everyone can be in the family shot.

We walked over to the Paseo del Rio, the River Walk, of course. Wendy took day and night shots from the Commerce Street bridge, happy to be up out of the crowds on the riverside sidewalks below. I delighted in lunch at the Casa Rio, my favorite stop in San Antonio, with its colorful sidewalk umbrellas, yummy food, and fun mariachi band. We also enjoyed the holiday lights from the Market Street bridge. San Antonio is a beautiful, and warm, place for Christmas. 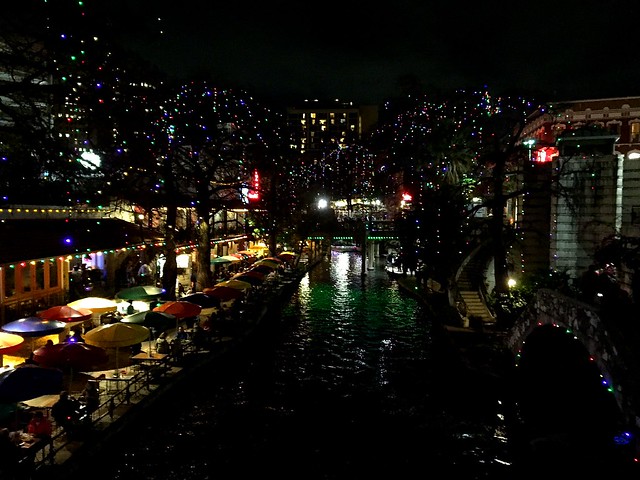 The river taxis were too crowded with tourists for me to suggest we take their “Museum Reach” taxi service upriver to the San Antonio Museum of Art. I saved that for a future visit. But we did walk to the Briscoe Western Art Museum. Its three floors featured more recent works than what one finds at most western art museums in Oklahoma. That’s because it is relatively new, housed in an old Carnegie library that for years was the Hertzberg Circus Museum. Its opening evidently was troubled and long delayed, but we enjoyed it.

Wendy and I both promptly noticed Canyon Princess by Gerald Balciar, a smaller and darker cousin to the huge rendition of it gracing Oklahoma City’s National Cowboy and Western Heritage Museum. I liked the diorama of the Battle of the Alamo, and the striking bronze The Line – Colonel Travis by James Muir. The image of Colonel Travis drawing a line in the sand, asking men to cross who were willing to die in a doomed defense of the Alamo, is a dramatic part of the Alamo legend. Much like the tale of Emily Morgan, there is no hard evidence this actually happened, but it is a memorable, if possibly fanciful, episode. 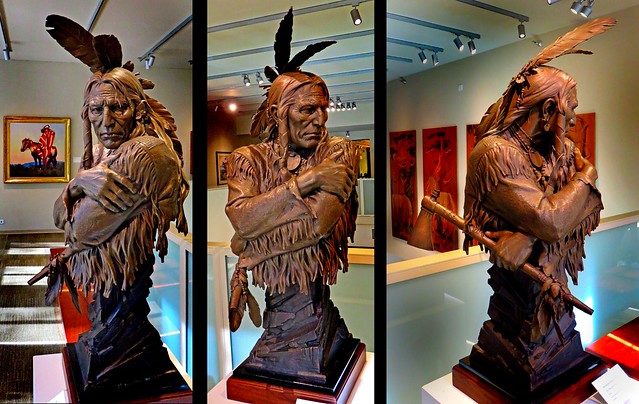 How Many More by Blair Buswell

The museum’s standout piece for both Wendy and me was Blair Buswell’s magnificent How Many More bronze of a Native American with his arms wrapped about himself, prepared to swing a tomahawk. The museum wisely put him at a height where he could gaze into our faces with an intense but weary look. “Look at that face!”, we both exclaimed. Wendy took a great shot of his visage with her iPhone, staring down the Indian warrior with her modern technology. 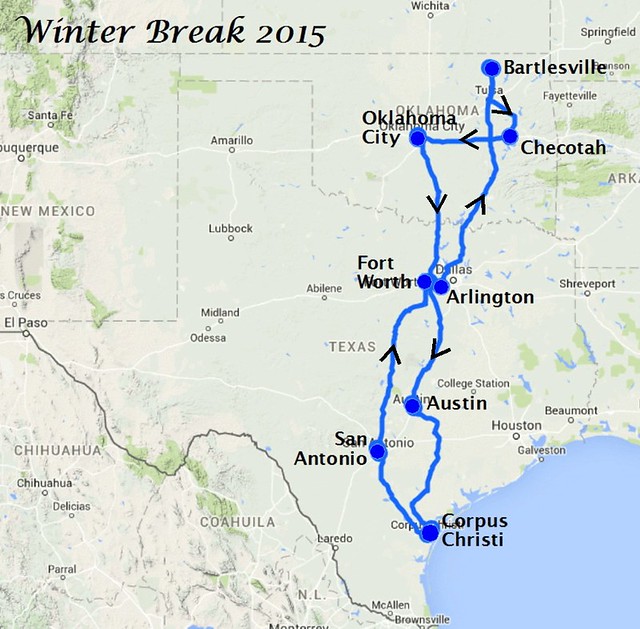 All too soon it was time for us to head to Fort Worth for our reservation at the downtown Omni for New Year’s Eve. I chose to take the Hill Country route along Route 281 instead of I-35. Wendy and I enjoyed the scenery, but it was still a long drive north. By the time we reached the hubbub of the hotel overlooking the convention center and the railyard, we were too exhausted to contemplate our planned event at Bass Hall. Instead, we ordered up room service and had a quiet New Year’s Eve together. The next day we met seven of her relatives for lunch at Babe’s in Arlington and enjoyed a family-style meal. It was fun to meet folks I had only known through Facebook posts and Wendy’s remembrances. Then we drove north back home, with a full weekend to recuperate from our adventure before returning to work.

A final panorama from this trip

It had been a long trip down to the Texas coast, but we were glad we had made the most of our Winter Break. The cold grip of winter would embrace us soon, leaving us pining for our Spring Break in mid-March.