A year ago, Wendy and I visited Lake Leatherwood for the first time, circumnavigating the lake on a four-mile hike on the Beacham Trail. Wendy had enjoyed searching for rocks with crystals along a creekbed at the northwest end of the lake. We made plans to return later for her to search the creekbed for more rocks while I hiked the nearby Overlook Trail. A year later, it was time to implement our plan.

The full trail is about two miles long, rising steeply at either end to run along a bench over 300 feet above the lake. The trail climbed steadily up the hillside, passing through a grassy area on its way through the woods. It climbed to about 30-50 feet from the top of the mountain.

The view of the lake from the overlook was obscured by trees and would be hopeless once they leafed out. 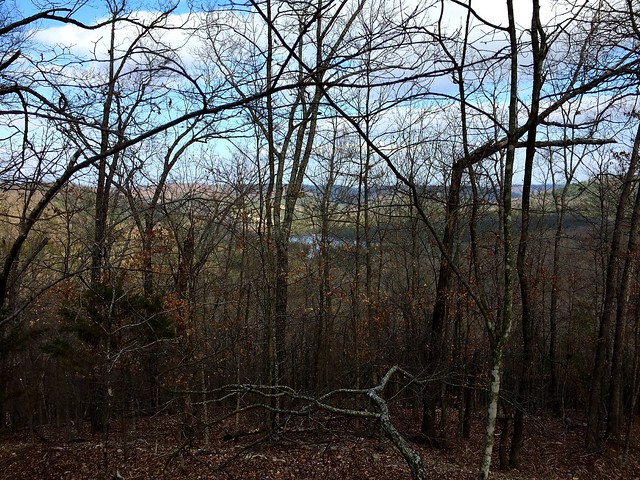 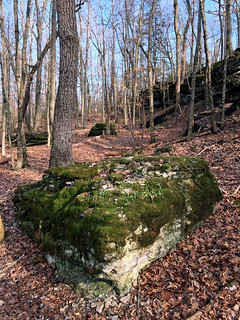 Mossy rocks along the bench trail

The bench trail running southwest from the overlook was quite nice. It featured exposed layers of rock, often smothered in green moss. The leaves covering the ground parted to expose the rocky trail and the large tables and benches of mossy rock.

I did not want to follow the Overlook Trail its full length, as that led over to Mulladay Hollow and would mean a long walk along the road back to the Beacham Trailhead. So I took a connector trail that led straight down the hillside from the Overlook Trail to the trailheads for the Beacham, Fuller, and lakeside trails.

There I opted to start my return north on the Fuller Trail, rather than the Beacham, but crossed over to the latter so that I would end up at the west end of the creekbed Wendy was exploring. Sure enough, I found her not too far from the end, eagerly hunting for crystals. 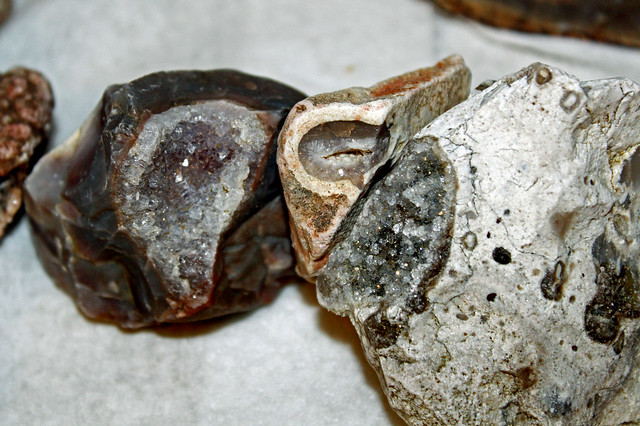 I joined in the hunt. Wendy found a number of rocks with embedded crystals, and I’m glad to say that I was able to contribute a find or two to her collection. The different colors of crystal and surrounding rocks made for a nice display back at home. 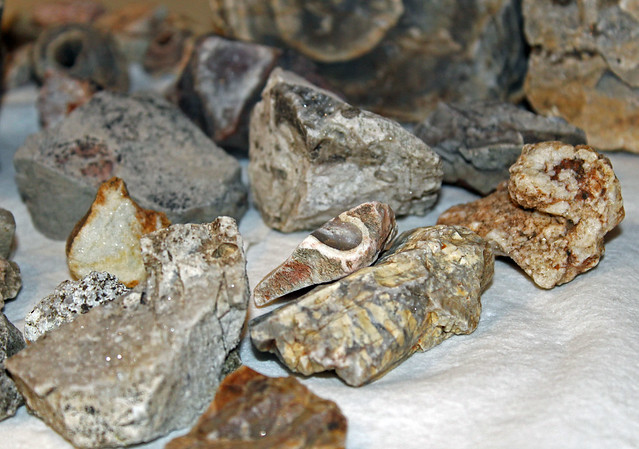 Some of the rocks Wendy collected

We began to carry our finds out on the Beacham Trail, but diverted halfway along to the lakeside trail. That way I could say that I’ve walked almost all of the trails on the west side of the lake, leaving many more trails to explore south of there. 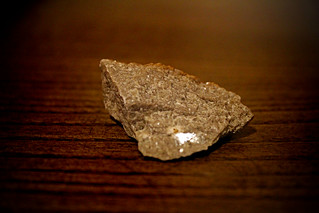 Wendy is such a good rock hound that, a day later, she even found a rock with embedded crystals at Ash Cave, a party spot north of Cassville that has been scoured over for decades. Many flint chips and arrowheads were dug out of that cave decades ago, including an excavation by Dr. Charles Peabody of Phillips Academy at Andover in 1915 which found flint and stone implements, a few bits of crude pottery, and many animal bones, with all of the large ones cracked to get at the marrow, in the ash bank that once graced the front of the cave.

We look forward to return trips to stay at Sugar Ridge, including more hiking and rock hunting at Lake Leatherwood along with a park we’ve not yet visited, Black Bass Lake.