This autumn has been unusually warm, so the fall colors are coming very late, and Wendy and I have not been on the trails as much as we had hoped. We walked the Lookout Lake loop at Osage Hills some weeks back, then the short loop at the north end of Table Mound up at Elk City Lake. This weekend we made some loops at the Mary K. Oxley Nature Center in Tulsa, winding our way along 2.6 miles of the many short trails in the north central part of Tulsa’s 2,832 acre Mohawk Park.

I had fun trying out the new online version of Google Earth that works in the Google Chrome browser. Here’s a spinning 3D view of our trek you can view in Google Chrome.

My acquaintance with the Oxley Nature Center began years ago, when my friend Carrie Fleharty took me to its Redbud Valley area, located five miles to the east of Mohawk Park. The Tulsa Audubon Society has a nice online history of it. In 2009, I took my first walk at the main area of the Oxley Nature Center in Mohawk Park, and over the years I have walked most, but not all, of the many little trail segments at the main area in Mohawk Park and the nearby North Woods area.

My walks in the main area at Oxley Nature Center

The trail segments live up to their billing. On this visit, Wendy spotted the Blue Heron Trail Loop on the map and wanted to backtrack a ways to take it, in hopes of seeing one. We had gotten very close to one in Tulsa’s Centennial Park back in September. 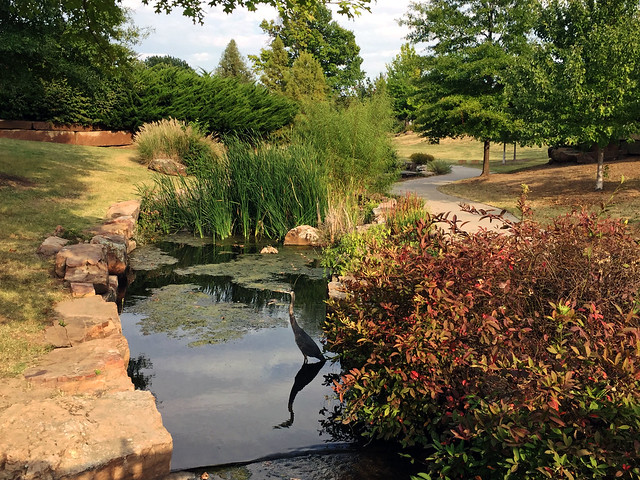 Sure enough, we saw two herons as we walked along Lake Sherry on the Blue Heron Trail. One was close enough for a telephoto 20x zoom shot or two. 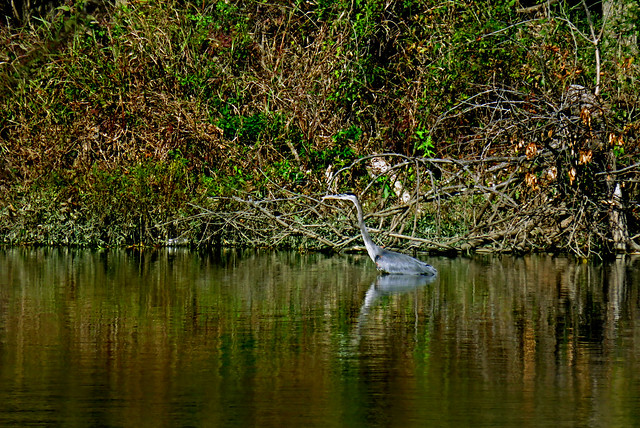 We saw plenty of squirrels and birds along our walk, and a possum crossed our path along the Flowline Trail. Two groups of deer flanked us on the Flowline Trail as we reached the Whitetail Trail. It was a nice outing, marred only by the steady booms from the Tulsa Gun Club a mile to the east. I see the club is closed on Mondays, Tuesdays, and Thursdays, something to bear in mind for more peaceful walks, although there will still be the occasional roar of jets taking off from the nearby airport. The airport noise is what eventually drove the Nature Center’s namesake, Mary K. Oxley, and her husband to leave their nearby property and move to Florida.

Thinking of Lake Sherry and Bob’s Trail and the rest, I began to wonder who they were named after. A little online research led me to a series of articles that Amy Marcoux, the center’s naturalist, wrote a decade ago in the park newsletter, which was only recently discontinued. Thankfully the Audobon Society has an online archive I could peruse.

The March/April 2006 newsletter told the history of Redbud Valley Nature Preserve.  It was the first Nature Conservancy project in the state, with the group purchasing the land for $80,000 in 1969 on the condition that the debt be paid off with locally raised funds. By March 1973 the debt was repaid, in part due to a lengthy campaign by the Tulsa Tribune newspaper. Oxley Nature Center took over management in 1990, and in 1992 the City of Tulsa purchased additional acreage. It is a hidden treasure well worth your time. Here’s May 2012 album of my visit there with Betty Henderson, and here’s a November 2013 album of a visit with Wendy.

But now let’s take a look at the history of Mohawk Park and the Nature Center itself.

The Town of Mohawk

The newsletters from May 2006 through February 2007 provided background on the early history of the park, and I edited those into a single Mohawk Park Early History file. It revealed that there was a town called Mohawk that began north of Bird Creek in May 1906 to serve the Halsell ranch.

William Eclectious Halsell, a young Texan married to a Texas girl of Cherokee descent, came to the area in 1880 and established his right, as an intermarried Cherokee, to use the Cherokee range. He was a mover and shaker over in Vinita and went on to operate the largest ranch in the Tulsa area, extending from the Creek line north almost to Bartlesville and from the Osage line almost to the Verdigris. His Mashed O brand was known throughout the southwest. He sold the Bird Creek Ranch to his son, Ewing, in 1899. The town of Mohawk had a post office from 1906 to 1915, but then was no more. A feedlot was established on the ranch land north of the creek in the 1930s, and the ranch operated until 1970.

In 1920 Tulsa built Spavinaw Lake, 60 miles northeast of the city, with a pipeline carrying the water to the Mohawk pumping station. The park land was originally acquired between 1922 and 1928 to accommodate a 500 acre reservoir, which is now Lake Yahola. The Bird Creek bottoms was considered a swamp. When Will Doolittle, who was the first parks department superintendent, first saw Mohawk Park in 1926, it was under three feet of water.

The park originally just sported the reservoir and a polo field, but the Tulsa Gun Club was established in 1926 and the city officially acquired all of the area land in 1927 for less than $300,000. A bond issue provided park equipment and started development of what is now the Tulsa Zoo. My father remembers going to Mohawk Park Zoo about 85 years ago when he was a young boy living in Dewey.

Overflow water from the Mohawk Reservoir was diverted to Flat Rock Creek, Coal Creek, and other low water areas. Outlets into Bird Creek were dammed at the north end, creating 10 miles of lagoons, and a two-mile levee along Bird Creek was built at the park’s northwest boundary.

The park became a game refuge, with stocking of bass, crappie, and perch in the lagoons. In 1931 the water department built 12 ponds that evolved into a fish hatchery, with 14 more ponds built in 1933 by the FERA and CWA depression-era programs in association with highway construction. 14 more ponds were added in 1934-35, bringing the hatchery area to 10 acres. By 1935 the system reached 33 acres, raising half a million bass, crappie, bream, and sunfish fingerlings each year. The hatchery operated until the late 1950s, but serious flooding from Bird Creek and other problems led to its demise.

Mohawk park in the 1930s also sported a seven mile bridle trail and two polo fields. The Riding and Hunt Club counted Tulsa’s Waite Phillips, William G. Skelly, T.K. Simmons, C.W. Flint, and others among its members. The park also became the home of Mohawk Golf Course in 1934, which was originally 18 holes and later doubled to 36. In 1934 a 70-acre Bird and Wildflower sanctuary was established in what is now the 804-acre Oxley Nature Center.

The largest urban CCC project in Oklahoma began in October 1934 at Mohawk Park, with about 200 men living in the camp and others walking to work. They dug out by hand a large drainage area to form the 70-acre Recreation Lake, now called Lake Sherry in honor of Dick Sherry, who helped found the Oxley Nature Center. Two reinforced concrete footbridges were built across Coal Creek; one remains at the south boundary of the Oxley area. By the time the camp disbanded in October 1937, they had also built shelters, tables, and other structures and cleared bike, bridle, and nature trails.

Philip Nelson presented a plan for a nature center to the city parks department in 1972, and part of a 1972 bond issue was allocated for it. But Nelson moved away, and the project went dormant.

In 1974 the Tulsa Audubon Society and its president, Dick Sherry, worked to get the nature center idea off the ground. But it lacked sufficient and available funding from the bond issue, so the non-profit Mohawk Nature Center Development, Inc. was established in 1975 to raise funds for a master plan created by the National Audubon Society. The group then raised funds for a shelter, trail system, and more.

John Thurman Oxley and his wife, Mary, contributed $200,000 in 1977. John was born in Bromide, OK in 1909.  As a young man, John had a second job in a photography studio owned by Mary K. Yetter’s father. John and Mary dated, often renting horses at Mohawk Park to ride the Roosevelt Bridle Trail. They married in 1935. John eventually graduated from the law school at the University of Tulsa and began a long career in the oil industry. He and Mary later lived at 36th Street North and Memorial with several barns and corrals for their many horses. He became a polo enthusiast, playing at the fields in Mohawk Park. He was the playing captain of eight national teams and led the first American team to win England’s Gold Cup.

Bob Jennings at Redbud Valley in 1981

With the Oxley donation, the improvements began, and the Tulsa Junior League offered to start a volunteer program. Robert G. Jennings was hired as the park’s first naturalist in 1977 and directed the center for 25 years. Bob’s Trail and B.J.’s pond by the visitor center are named for him. But in his first years there, the center still lacked a visitor building.

In 1979 the Mabee Foundation offered a challenge grant. That, with another major gift from John and Mary Oxley, funded the construction of the Oxley-Yetter Interpretive Building. It opened in 1981 with a classroom, wildlife viewing area, hands-on exhibits, restrooms, drinking fountain, gift shop, offices, and work areas. As each part of the project was finished, the non-profit turned it over to the City of Tulsa.  Once the physical improvements were in place, the Mohawk Nature Development Inc. changed into the Mary K. Oxley Nature Center Association, Inc.

Bob Jennings at his retirement party

Bob Jennings retired as the center’s director in 2002, receiving a tree section at his retirement party called “Bob’s Stump” in recognition of the “From the Stump” column he wrote in the center’s newsletter. He passed away in 2004. The Interpretative Building was remodeled in 2007 and 2008.

I’m grateful to all of these people, and many more, who created the Oxley Nature Center in Mohawk Park. It, along with Redbud Valley and the North Woods unit, are wonderful oases in north Tulsa.

1 Response to Exploring Oxley Nature Center and its History