The Grand Staircase-Escalante National Monument is a rugged region of canyons, arches, plateaus and cliffs. Established in 1996, it was recently reduced and broken apart into three separate monuments. We visited the northeast part of the region,  spending a day driving south from Salt Lake City to a casita west of the small town of Escalante. We stopped briefly along the way to visit the northern tip of Capitol Reef National Park and then enjoyed the amazing scenery along Highway 12 from there south and west to Escalante. 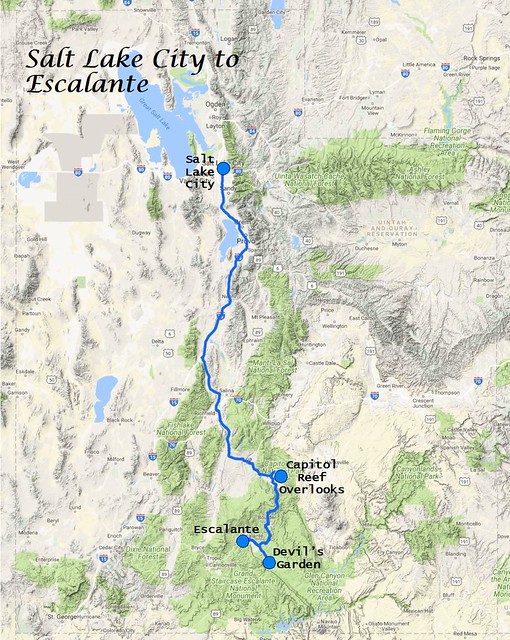 Our route from Salt Lake City

A reef sounds rather out of place in this dry desert land, but locally it refers to a rocky barrier to land travel just as ocean reefs can bar travel on the sea. The national park is a thin strip of land running north-south which encompasses the Waterpocket Fold, a 100-mile long monocline which is an S-shaped warp in the rocks likely formed as continental plates collided to create the Rocky Mountains. Pools in the eroded rocks capture rainwater, and a colorful section near the Fremont River is called Capitol Reef because of white sandstone dome formations that resemble the domes placed upon many capitol buildings.

We didn’t have time to explore or hike in the park, but did drive over to its northern entrance to take in Panorama Point and the Goosenecks Overlook. Highway 24 runs along the base of the stacked red layers in the Mummy Cliffs. A side road took us to a parking area, with a short slickrock trail leading up a rise for the views. Slickrock is smooth, weathered sandstone which sheds water instantly and can be dangerous to hikers as well as horses wearing iron shoes, but is fine for bikes and jeeps. In this area, the sandstone was either slickrock or heavily pockmarked. 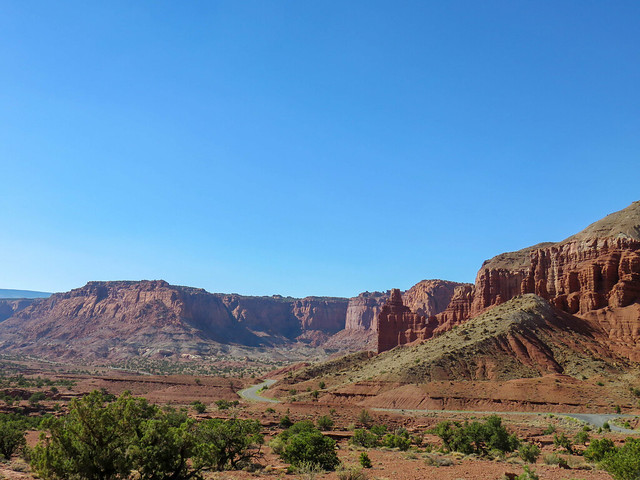 Highway 24 around the Mummy Cliffs

Wendy patiently waited while I scampered about taking in the vistas atop the slabs and ridges of sandstone. Then we drove to the Goosenecks Overlook, where she shied away from the quite windy overlooks 800 feet above Sulphur Creek. Over the past six million years the creek has cut its winding way deep into the rock.

Sulphur Creek has cut through the Moenkopi Formation of mud and sand from shallow seas and floodplains of 245 million years ago, on down through the Kaibab Limestone deposited in shallow seas 270 million years ago and which is the top layer of the Grand Canyon 160 miles to the south. The creek has further penetrated to the White Rim Sandstone formed from coastal sand dunes 280 million years ago. This carved layer cake of deposition is quite beautiful, but we were both drying out in the hot dessicating wind. 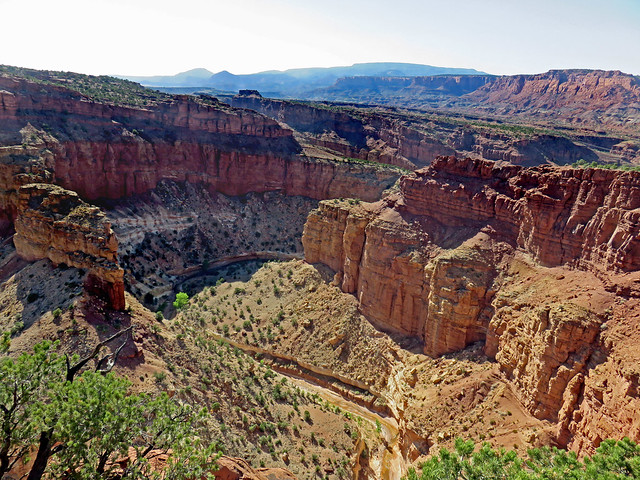 Sulphur Creek at the Goosenecks

So we were glad to hop back into our Ford Fusion for the drive along Highway 12 towards Escalante. We found relief from the heat as we drove from the desert up into the forests of Boulder Mountain, climbing from 6,300 feet to over 9,000 feet through large stands of aspen, pine, spruce, and fir. The Larb Hollow Overlook provided a view of the Henry Mountains, the last mountain range to be added to the map of the United States back in 1872. 350 bison roam freely there, one of only three free-roaming and genetically purebred herds left on our public lands. We could see the Lower Bowns Reservoir in the distance as well as jutting rock formations. 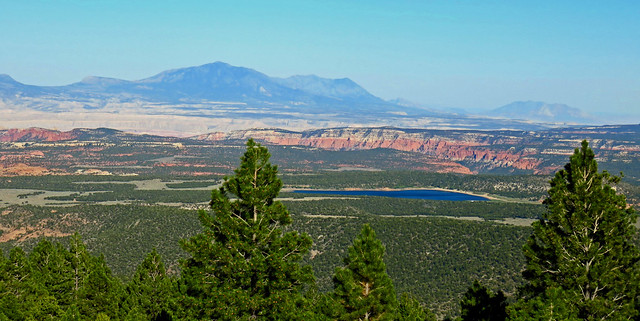 The road descended from the mountain to the town of Boulder, and then ran along the Hogback, a razorback ridge of slickrock high above Calf Creek to the west and Boulder Creek to the east. We stopped after that impressive if somewhat harrowing drive to view Calf Creek’s canyon. 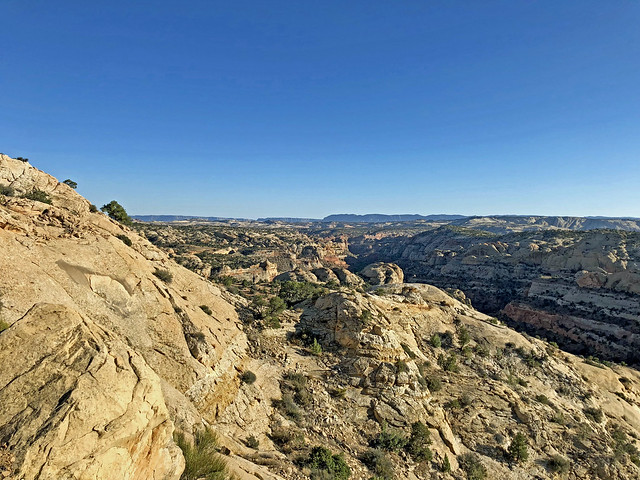 We crossed the Escalante River, taking a panorama from the south canyon wall, looking down upon a yurt perched on a ledge far below.

It was late by the time we passed through Escalante and reached Slot Canyons Inn, where I had rented the Moonrise Casita while a wedding party had commandeered the remainder of the inn. We were truly remote, with no reliable internet or cell service. That remoteness frustrated our news routines, but did provide dark skies which we could view from the entry deck’s recliners. Wendy treasures privacy and fashioned a blind of paper towels for one high window. I thought she was being a bit paranoid until later in our stay when a small drone buzzed about overhead. Those darn paparazzi follow us everywhere! 🙂 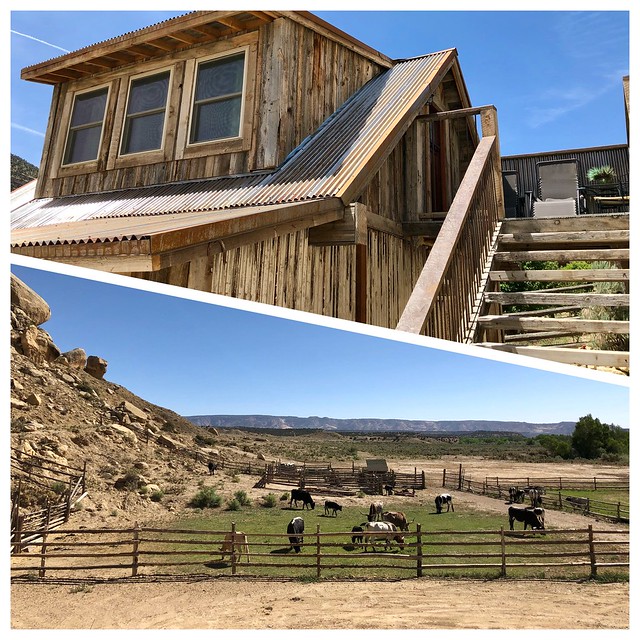 Longhorn cattle, Holsteins, horses, and even a bighorn sheep grazed in the small pastures around the casita. At night Wendy would tuck herself in a space under one of the gables for her nightly coffee while reading the latest book by David Sedaris. By day I sat up in the bed or reclined out on the balcony to read Pride and Prejudice, my follow-up to reading Jane Austen’s Emma six summers back. It was disconcerting to look up from my book and be transported from a search for husbands for Mr. Bennet’s daughters in Regency England to a sunny Utah pasture.

Our big outing from Escalante was an incredibly bumpy ride 12 miles along the washboard Hole in the Rock road to the Devil’s Garden. It is a collection of hoodoos and arches in the Entrada Sandstone. The hoodoos form at the intersection of the Cannonville and Gunsight Butte members of the formation. The upper Cannonville layer has more clay and silt, so it erodes away, leaving pillars of the Gunsight Butte layer. 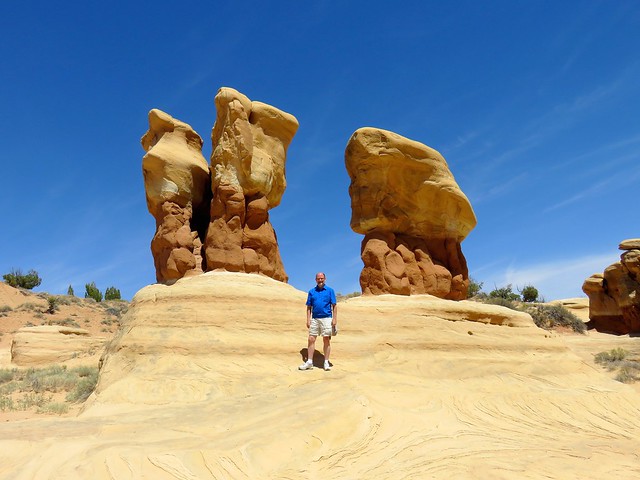 Granger and some hoodoos

Erosion changes ridges into standalone hoodoos, which are taller than a man. One group reminded me of Disney’s Snow White and the Seven Dwarfs, standing high on the rocks over a dry gully. 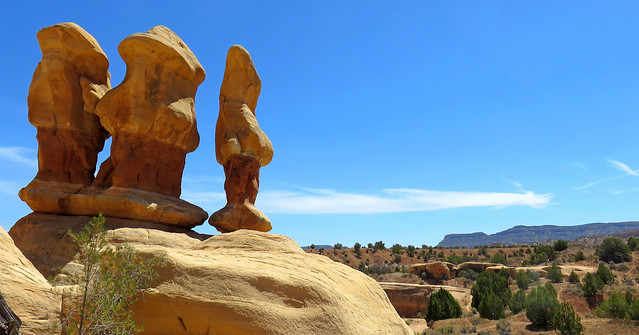 There were a few other visitors wandering amidst the rocks and admiring the thin and thick arches. No doubt we were all glad to be afoot after enduring the bone-rattling ride to get there. 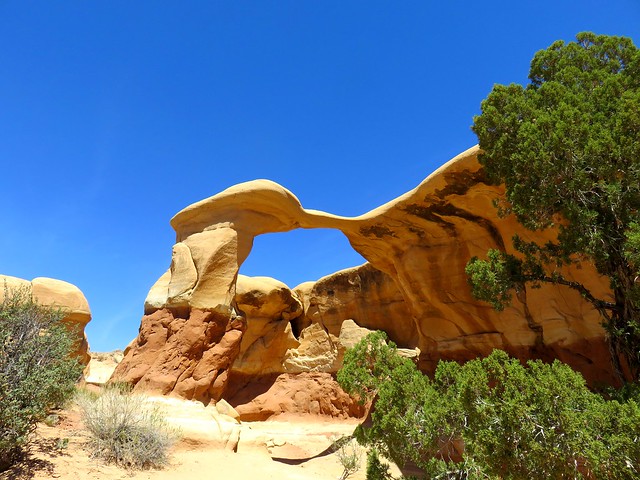 Arch at the Devil’s Garden

Hole in the Rock above Lake Powell

We were not tempted to continue down Hole in the Rock Road to its canyons, instead struggling back north along the 12 miles of rough road to Escalante. Along the way I pondered how the road gets even rougher if you turn south for the 50-mile journey that ends in the Hole in the Rock itself at Lake Powell.

In 1880, an expedition of Mormons trying to settle in southeastern Utah widened that narrow crack in the canyon rim above the Colorado River to reach a ford. The drop to the river was nearly 2000 feet with an average grade of 25 degrees, although some places were as steep as 45 degrees.

Construction of this passageway was very difficult, plagued by lack of wood, forage for cattle, bitter cold, and diminishing food supplies. Blasting powder and picks were used to widen and/or fill various sections of the crevice. At the lower part of the Hole, a road was constructed on the side of a sheer cliff wall. Although a three-foot shelf had already existed, an extension to the shelf was formed by driving two-foot stakes into the rock and piling vegetation and rocks on top. This portion of the trail was nicknamed “Uncle Ben’s Dugway” in honor of its engineer, Benjamin Perkins. After six weeks of picking, chiseling, drilling, blasting, and digging, the Hole-in-the-Rock road had been completed. Even after they finally crossed the Colorado, the pioneers had another 120 miles of arduous travel before they reached Bluff, Utah.

Hikers at Hole in the Rock above Lake Powell

One-third of the Hole in the Rock slit now lies beneath the waters of Lake Powell. The Hole was only used for a year before the settlers shifted the route a few miles over to the better Hall’s Crossing. The incredibly rough “modern” Hole in the Rock Road to the area is one of the most traveled in the monument, but is still hellish despite being graded 20 or more times each tourist season.

The terrain in this region is unforgiving. Later in the week Wendy and I would take the modern route 191 through Bluff as we traveled from Page, Arizona to Moab, Utah. The modern roads make long sweeping arcs to avoid the rough mesas and canyons on either side of the Colorado River.

Upon returning to Escalante, we purchased the most normal food we could find at a hipster grocery. We had already sampled the two major restaurants in town. We had a kindly server at the Circle D while the best thing about Boots Cafe was its large taxidermied bear.

This was the most remote area we visited during our vacation. The lack of services and sparse population allowed me to fully relax, knowing that I was truly away from work. Both Wendy and I preferred to avoid the crowds by shunning the pay areas of the multiple national parks along our route.

The next phase of our trip would take us past Bryce Canyon down to Lake Powell in Arizona, where we would take a sunny boat tour and a shaded guided walk through a picturesque slot canyon.

Arid Adventure Part 3: Down the Grand Staircase to Lake Powell >