Arid Adventure, Part 3: Down the Grand Staircase to Lake Powell

The highlight of our trip would come at the lowest point in our looping journey: a walk through the Antelope Slot Canyon near Page, Arizona. So we needed to make our way south out of Utah down to the Glen Canyon Dam which impounds Lake Powell. The terrain meant we would have to drive a long arc west, south, and then back east.

Scenic Highway 12 continued to impress as we traveled west toward Bryce Canyon. A few small towns dot the arid Bryce valley. After we found that Foster’s Family Restaurant in Bryce was now the UpTop Steakhouse and only open in the evenings, we backtracked to Tropic for lunch at Rustler’s Restaurant.

Tropic was named by pioneers seeking to promote it as a more temperate location than its competitors. In the late 1880s, the Mormon farmers in the area diverted water from the East Fork of the Sevier River into the often-dry Paria River drainage to irrigate their fields. They dug, mostly by hand, a 15-mile ditch which still runs today. We saw the Sevier River’s water flowing through the Tropic Ditch near the Mossy Cave Trail at the north end of Bryce Canyon. 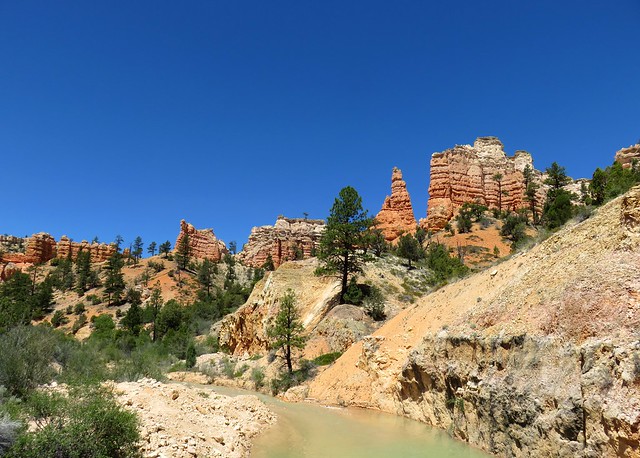 The surrounding hillsides had the characteristic look of the famous eroded amphitheaters of Bryce Canyon National Park a few miles to the southwest, which nature carved out of the pink Claron limestone of the Paunsaugunt Plateau. Unlike the Grand Canyon, Bryce was not carved by flowing water, but instead by frost-wedging and chemical weathering.

For 200 days a year the temperature cycles above and below freezing in that area of Utah. During the day, melt water seeps into fractures only to freeze at night, expanding by 9%. The ice exerts a tremendous pressure of 2,000-20,000 pounds per square inch. Over time this “frost-wedging” shatters and pries rock apart. In addition, rain water, which is naturally acidic, slowly dissolves the limestone, rounding off edges and washing away debris. This creates fins of rock jutting out from the cliffsides, which then erode into free-standing hoodoos. 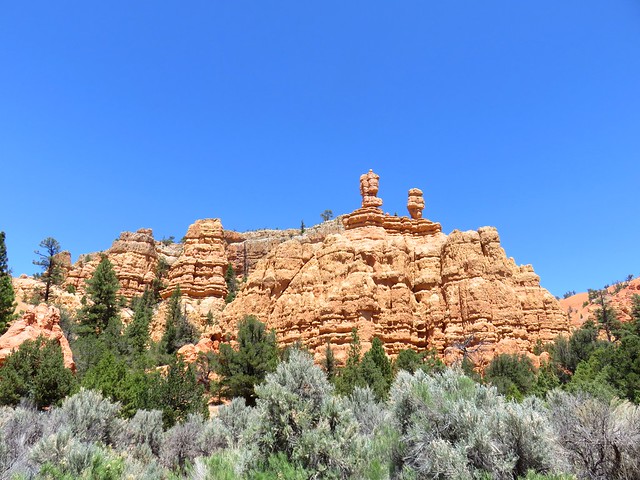 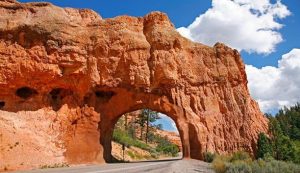 We shopped for trinkets in Bryce and then continued our journey west. A dozen miles across the northern end of Bryce Canyon, Highway 12 runs through Red Canyon, the western edge of the valley, with its own erosion of the Claron limestone. The road passes through two manmade arches in the rock, which were fun to drive through.

Too soon we left Highway 12, and the rest of the drive to Page was uneventful. We followed highway 89 down the Grand Staircase, a term Clarence Dutton coined for the steady descent, layer by layer, through the sedimentary rock formations from Bryce Canyon south to the Grand Canyon. The pink cliffs of Bryce give way to grey, then white, and eventually the Vermilion Cliffs we had driven by the previous summer, ending in the chocolate cliffs that form the top layer of the Grand Canyon.

The high desert we drove through heading back east in far southern Utah towards Lake Powell was quite inhospitable. It became even more desolate as we dipped south into Arizona. It would never occur to one to stop and stay in Page, Arizona were it not for the formidable Glen Canyon Dam and associated natural and man-made wonders.

The 710-foot high dam was built by the U.S. Bureau of Reclamation from 1956 to 1966 and has always been controversial. Edward Abbey wanted to wreck it in The Monkey Wrench Gang, and Marc Reisner delineated its downsides in his superb history Cadillac Desert. The level of Lake Powell fluctuates considerably, but it has never recovered from a drought in the first years of the 21st century. While its full capacity ranks it as the second-largest man-made reservoir in our country, global warming and the increasing demands on the Colorado River mean it could eventually become a “dead pool” that can no longer generate hydroelectric power. 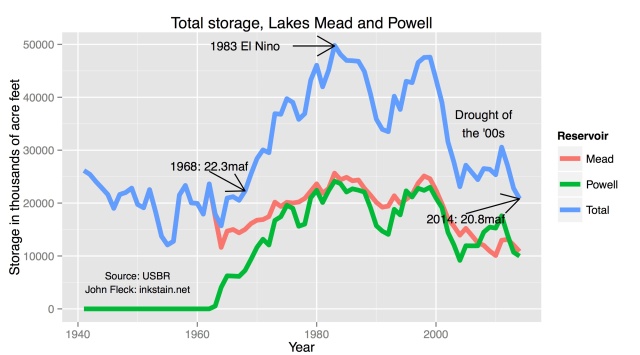 We were glad to arrive at the Days Inn in Page, where we had a nice dinner at the Gone West restaurant. The next morning we drove to the Wahweap Marina for an Antelope Canyon boat cruise. Wahweap is a Paiute word meaning “bitter water” and dates back to when the mineral-laden trickles of water in the area were unattractive. Now all that and much of Glen Canyon is subsumed under the cool clear waters of the lake.

There was quite a crowd in the marina waiting to board the boat, hiding from the brutal sunlight outside. We sat on the upper deck by a retired couple from New Jersey. They were fun to visit with and in the middle of their own adventure out west with some other retirees. I wore my Tilley hat, of course, but made the mistake of wearing shorts and forgetting to protect my legs with sunscreen. The heat and sunlight were intense, leaving me with an itchy sunburn by the end of the 90-minute cruise.

Our boat took us past the dam and Castle Rock. All around us were the red cliffs of the uppermost layers of Glen Canyon and the “bathtub ring” of mineral deposits from back when the lake was actually full decades ago. 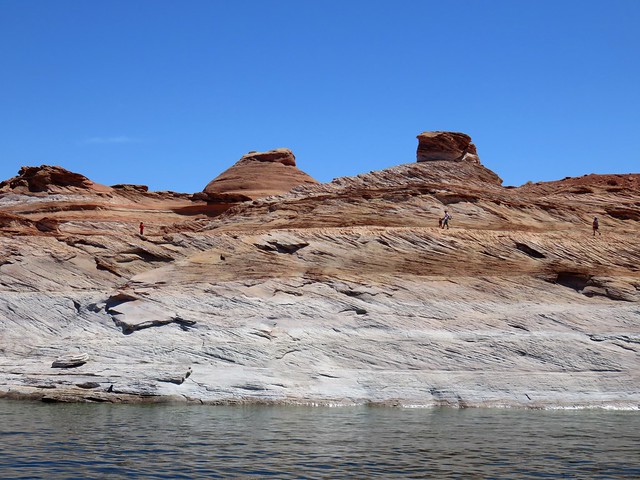 We zoomed by the cliffs and eventually headed up Antelope Canyon. Our massive vessel cruised up the winding canyon, following a much smaller boat. I was surprised at how far we could make it up the winding and narrowing canyon formed by Antelope Creek. 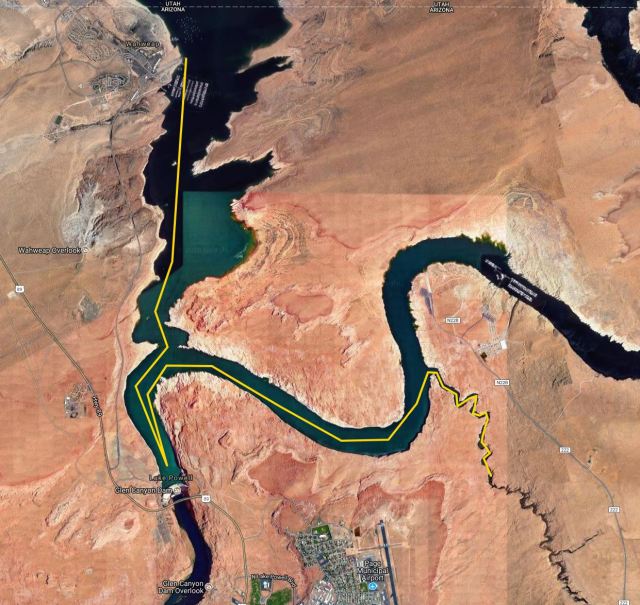 Our course up Antelope Canyon

Desert varnish stained the walls of the canyon, reminding me of the stains at Echo Amphitheater near Ghost Ranch in New Mexico. This natural patina is primarily clay particles with iron and manganese oxides. 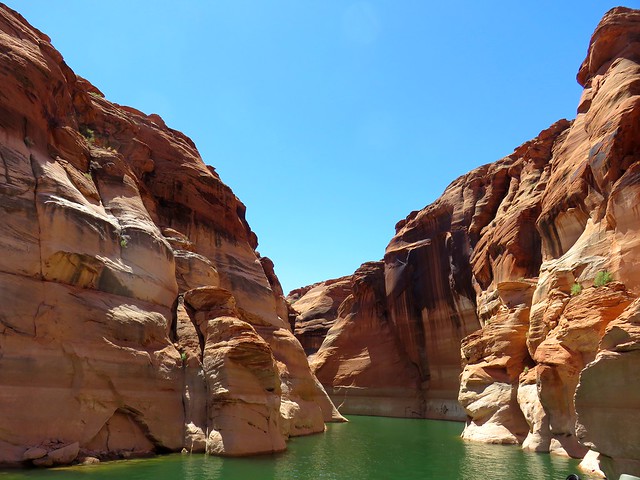 The weathering in some places exposed the layers of sedimentary rock, created hoodoos, and in spots yielded bright orange sand. There were quite a few houseboats on the lake, although for me the intense heat and sunlight, with little vegetation, left me with little desire to linger. 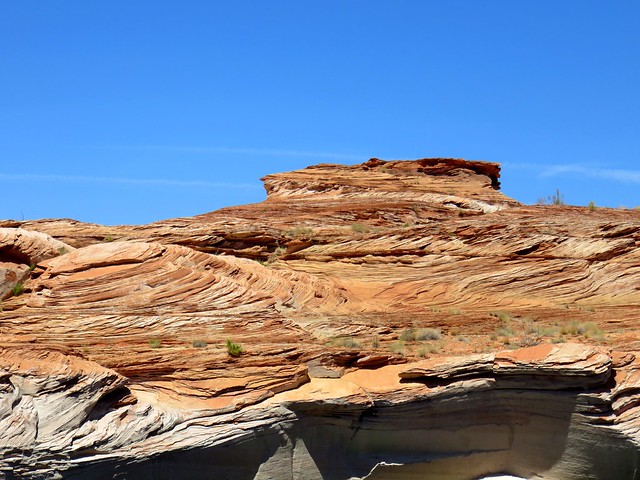 We returned to the marina and struggled to cool off inside the resort before heading back to Page. That afternoon we laundered clothes, and I bought some aloe vera gel for my sunburned legs. The next day we would revisit Antelope Canyon via a guided walking tour through its upper slot canyon.