Roaring River is in Barry County, Missouri, where I have many family roots on my father’s side.

The quickest route from Bartlesville to the region takes me by the locations of the annual reunions for my paternal grandmother’s and grandfather’s families.  My grandmother, who was born on a farm six miles southwest of Roaring River near Seligman, was a Weston and their reunions were held at Twin Bridges State Park on the north edge of Grand Lake ‘o the Cherokees at the confluence of the Neosho and Spring Rivers.  And just southeast of the highway junction of US 60 and Missouri 37, where I make a sharp turn southward, is Monett’s South Park, where the Meador family reunions were held.  The property was once the farm of one of my great-grandfather Meador’s brothers and was sold to the city in 1923 for $10,000.

Cassville is a locus of family lore, where my grandfather was born in a double log house which had been a stage coach stop on the Springfield to Fayetteville Wire Road, and nearby Lee Spring was a home to several of my ancestors.

My paternal grandfather’s father and mother both lost their own fathers in this area during the Civil War, in which they served on opposing sides.  My great-grandfather’s father had enlisted in the Union army in April 1862 and died the next month of pneumonia after his overcoat was stolen.  He passed away in the army hospital housed in the McConnel building on Cassville’s courthouse square, the same building where my parents would close on their vacation home on Table Rock Lake 106 years later.  And Table Rock Lake was once White River, which my great-grandmother’s father was crossing at Golden Ford near Mano when he was shot and killed by Union guards.  My family still has the vest he was wearing, complete with bullet hole.

One of my great-grandfather Meador’s brothers published the Cassville Republican newspaper for 41 years and served as the town mayor and president of the school board.  The Republican folded long ago, but for years my father kept in touch with the area by subscribing to the rival Cassville Democrat paper, which lives on and “covers Barry County like the morning dew.”

My great-grandfather lost his mother before he was two and was orphaned at age six when his father died in the Union hospital in Cassville.  They lived on the family farm at Big Sugar Creek near Cyclone and that property is now a restricted part of Big Sugar Creek State Park located east of the ford at Cyclone up the big hill.  Upon losing their father, my great-grandfather and his orphaned siblings abandoned the farm and moved to former slave quarters on a farm near Monett for awhile.  Times were hard for them.  He remembered having only cornbread to eat, sometimes with milk and sometimes without, and crying from hunger after going to bed.  He also recalled that their only shoes were ones discarded by soldiers who bathed at a nearby lake.  Among the few family possessions were a bible and clock, which were passed on down to an influential professor in Springfield, Missouri.  Throughout his life my great-grandfather had hill farms throughout the Cassville area.  He and my great-grandmother are buried at Maplewood Cemetery in Exeter.  My paternal grandmother’s parents are buried at Corinth Cemetery south of Cassville. 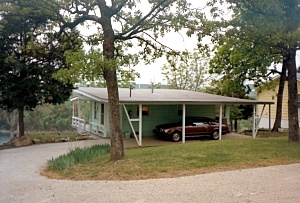 I grew up visiting the area regularly since my parents had “the cabin” – a one-bedroom vacation home in Sunset Heights between Eagle Rock and Chain-o-Lakes – from 1968 through 1998.  It sat on a high bluff overlooking Table Rock Lake.  That is where my love for day hikes developed, scrabbling about the bluff and on the plenitude of trails at Roaring River.

5 Responses to Roaring River Area: My Family and Barry County