A Long Walk in the Woods

Until this weekend my day hike records show the longest hikes had been 13 miles at both Eagle Creek in Oregon and Queen Wilhelmina in Arkansas and 14.5 miles on the Elk River Trail up in Kansas. On Saturday, May 7, 2011 I set a new personal record with an 18.4 mile long walk in the woods in far southeastern Oklahoma. Between Atoka and Antlers is McGee Creek State Park and 10 miles from there, at the northeast corner of McGee Creek Lake, is the 8,900 acre McGee Creek Natural Scenic Recreation Area. It has 25 miles of trails for hikers, mountain bikers, and equestrians in keeping with its designation as a wilderness-type recreational experience for non-motorized activities. Gas boat motors are prohibited in the area as well, although I saw a boat flagrantly violating that edict, roaring past the Whiskey Flats point more than half-way through the quiet zone.

The trails I travelled…

McGee Creek Lake was developed from 1979-1986 by the Bureau of Reclamation, prompted by Oklahoma City’s continuing need for water and Oklahoma City, Soda, Atoka County, and the City of Atoka all have water rights to it. It is 160 miles due south of Bartlesville and about 3.75 hours away. I knew the layout of the trails meant I’d need a very long hike, so I booked a room in Atoka for Friday night so I could spend over eight hours on the trails on Saturday before driving home.

I made a straight shot of the drive down to Atoka and had dealings with five of its 3,000 citizens for my overnight stay. Each of them was gracious and kind and spoke with that distinctive Little Dixie accent. The City of Atoka was founded in the 1850s and named for Captain Atoka Oshlatubee, Choctaw Chief of the Pushmataha district, who came to the area in 1833 after signing the Treaty of Dancing Rabbit Creek, which began the process of relocating the Choctaw people from Mississippi to Oklahoma in 1830. So it is no surprise that the main street through Atoka is Mississippi Avenue. Atoka’s name was derived from the Choctaw `hitoka’ or `Hetoka’ and means `ball ground.’ Atoka is reported to be the site of the oldest Catholic parish in Indian Territory, and oldest Freemason and Order of the Eastern Star chapters in Oklahoma. Captain Atoka built the first log cabin in Atoka in 1850, where he later operated a stage station. Like many Native Americans, he fought for the Confederacy in the Civil War. He was killed in the war and is believed to be buried near Farris.

The internet had steered me to the Comfort Inn for my stay. The room was okay but had unusually high ceilings, perhaps to compensate for its narrowness but reminding me of my paternal grandparents’ old Cities Service company house which they had moved from Grabham Station to Independence, KS. It had very high ceilings because it dated back to the days before air conditioning. The hotel room furnishings were spare but serviceable and my stay was satisfactory except for a loud rumbling noise after midnight which shook me awake and continued for several minutes. Earlier I’d heard freight trains rumbling by, but this was clearly something happening in the room behind my bed. I knew it was mechanical and not simply the beast with two backs; had someone’s Magic Fingers bed malfunctioned? Later I noticed the elevator to the next floor was behind that wall, so it was probably elevator trouble. Thankfully it only lasted five to ten minutes and was over for good. 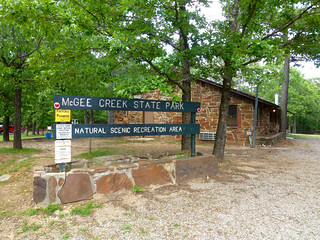 It was a 30 mile drive from the hotel to the remote Natural Scenic Recreation Area, tucked away 13 miles north of Highway 3 on Centerpoint Road, which is paved but rather rough for the last few miles. I stopped at the ranger station to fill out the free permit. The park limits the number of guests doing various activities, but I saw no other hikers on the trails the whole day, only one group of 10 equestrians. The permit asks for your name and activity, including when you are heading out, which trail you’re leaving on, and when you expect to return. You leave a carbon copy at the trailhead and turn in the original when you are done. This is the first time in almost 100 day hikes in which there has been a reasonable system to allow rangers to really know who is doing what and when they should be back.

I drove west from the ranger station to park at the trailhead for the Carnasaw Nature Trail, which promised an overlook of the lake and the canyon to the north carved by Little Bugaboo Creek. Like many such overlooks, I found the view completely blocked by tall trees, although the rock formations were nice and there was spiderwort along the trail. Soon I reached the west end of the Rocky Point Trail, which led southeast past the eponymous rocky point, which I circumnavigated via a side trail. 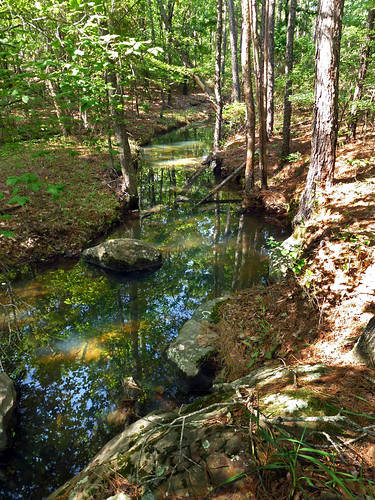 I turned northeast upon reaching the Little Bugaboo Trail, which crosses and then runs alongside Little Bugaboo Creek. After relaxing at the pretty ford, I came upon some small orange mushrooms alongside the trail and some lanceleaf tickseed. While ticks don’t hatch from its seeds, the bloodsuckers are abundant in this area of Oklahoma and I had thoroughly sprayed my limbs and the openings in my clothes with Backwoods Cutter to keep the critters away. Either the ticks were not out in abundance or the Cutter was working well, for I never picked up a tick all through the long hike. The trail meandered through the trees and then alongside the creek, affording a better view of its run through the woods.

I reached the Box Spring Camp Area, which is the intersection of several trails and features spiderwort and other wildflowers and butterflies. I took the Whiskey Flats trail, which led westward over a mile down to the shore of McGee Creek Lake with a campfire spot and a view of the Little Bugaboo Creek entering the lake. I sat beside the water for an early lunch. As I finished I heard the Ghost Riders draw up behind me. It was the party of 10 equestrians, a friendly group of several couples and some children. I call them the Ghost Riders because I thought I snapped a picture of them, yet found no such photo on my camera card. They asked me how far I would be hiking and I guessed 14 miles, which had them expressing admiration for my stamina. Bidding them farewell, I hustled up the Whiskey Flats trail with the party on my heels, managing to outpace their leisurely ride. It was fun to hightail it up the hillsides toward the rim of Bugaboo Canyon, pretending I was an outlaw with a posse after me.

When I reached the Box Spring Camp Area I headed northeast on the South Rim Trail with a rocky bluff overlooking the Bugaboo Canyon. Midway along it I reached another overlook spot of projecting rocks with a view which, sure enough, was blocked by trees. But I posed atop the pretty rock formations. The South Rim Trail along here was clearly an old logging road, which is the origin of most of the trails in the Natural Scenic Recreation Area. The trail ended and I made a sharp westward turn onto the North Rim Trail. 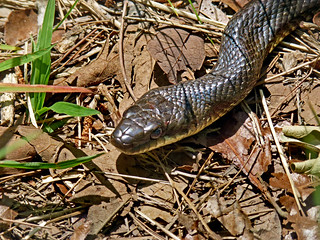 This run of trail had three memorable features. First was the last remnants of a fallen tree, parts of which looked like wooden shark teeth. Next was a tree which looked like bent taffy. Finally I had a dramatic pause when I realized a long snake was lying across the trail alongside a fallen tree limb. Thankfully it was a non-venomous black ratsnake. He refused to yield right of way, just sticking his tongue out at me. I returned the favor and, giving him a wide berth, walked onward to the Wildcat Canyon trailhead.

Wildcat Canyon, like Bugaboo Canyon, runs southwestward down into the lake. I passed thistles and ferns as I descended toward the lake, with the trail ending many yards from shore, leaving me to navigate the steep and rocky creek bed to where the canyon enters the lake. I had hiked nine miles to this farthest end of my hike. The temperature had reached the low 80s, so I was grateful for the forest shade as I retraced my path all of the way back to Box Spring Camp Area, where I took a fresh section of the South Rim trail toward the ranger station. I passed a large cleared field with a lingering chimney of what may have once been a homestead. 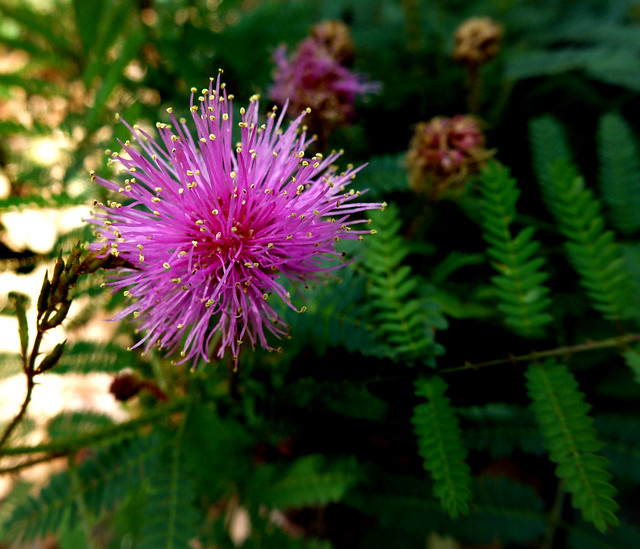 Arriving back at the ranger station, I began walking the mile along the road to where my car was parked. The trail riders I had met at Whiskey Flats appeared, heading out for the West Boundary Trail. They asked how far I’d come and when I said my tracker said I was at the 18 mile mark and I had one more mile to go back to the car, they were mighty impressed. We parted and when I reached my car I swigged some water and took advantage of the lonely spot to completely strip down and wash up, putting on all fresh clothes for my drive north to McAlester for a big Mexican dinner at Patrón Grill.

There weren’t many scenic highlights on my longest day hike, but I welcomed the long walk in the woods after a stressful week at school filled with meetings and one 14-hour work day. Various obligations will keep me in the Bartlesville area for the next couple of Saturdays, so I may not make it out to any new trails for awhile as the school year winds down to a close at the end of May.

1 Response to A Long Walk in the Woods