Wendy and I wanted to get out of town for some summer sightseeing, but not hiking since the weather was hot and humid. We ended up circumnavigating Lake Oologah southeast of Bartlesville as we made tourist stops in Claremore and visited Totem Pole Park east of Foyil. 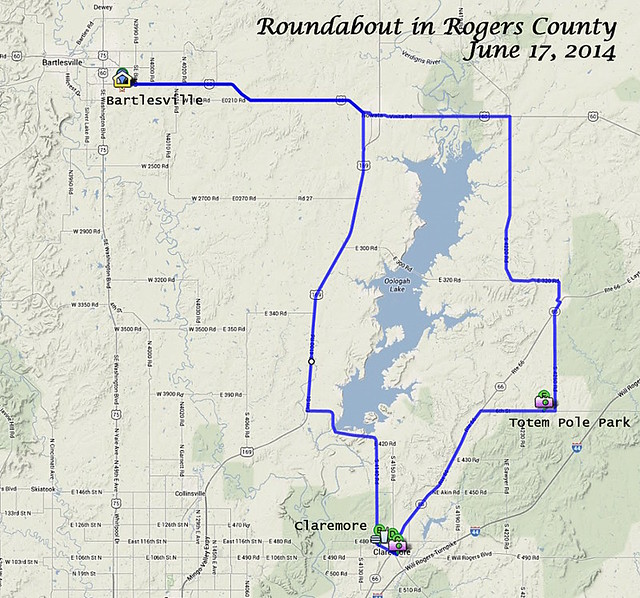 The biggest attraction in Claremore is the Will Rogers Museum, but we had seen it before, albeit separately. Next door is the Hammett House restaurant, which my friends Carrie and Trish introduced me to years ago. Wendy had the Chicken Fried Chicken Salad and I had the Sweddar Chicken Sandwich (swiss and cheddar cheese with bacon on top); both were tasty. For dessert she wisely chose a slice of Buttermilk Chess Custard pie while I unwisely chose the special, a slice of Key Lime Cake from a recipe by Trisha Yearwood. Ugh; I reckon she sings better than she bakes.

Our next stop was the Belvidere Mansion (yes, that is the spelling). John and Mary Bayless and their seven children moved from Cassville, Missouri to Indian Territory back in 1901. Mr. Bayless had been involved with the railroads in Missouri, Arkansas, and Indian Territory, and was attracted to Claremore over Tulsa because at the time Claremore was larger and also boasted two railroads. There is still a busy rail line running through the heart of town today, which causes traffic jams. The city has been working for years on plans to elevate the tracks, but for now thirty-four daily trains regularly divide the town in two.

Anyway, back to Bayless. He helped develop Sulphur, OK and its Artesian Hotel, which had some of the same tin and marble features found in the Belvidere Mansion in Claremore. Of all of the projects he was involved in, today only the Belvidere and his old home in Cassville remain. The exterior is interesting, with three different colors of brick and two round front corner turrets contrasting with two square towers at the rear corners. Wendy has sharp eyes and noticed how one of the turret ornaments had deteriorated over the past 107 years. 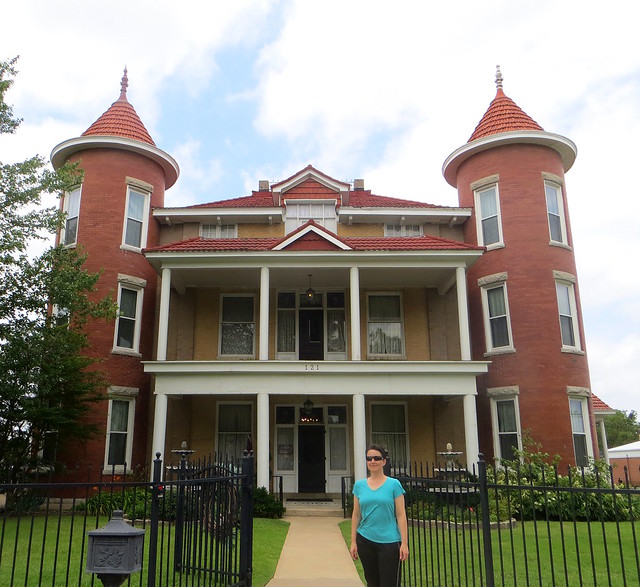 Construction of the mansion ran from 1902 until 1907, being finished shortly after John Bayless had died. Mary and the children lived in it until 1919, but in the 1930s it was converted into twelve apartments. It fell into disrepair by the 1980s and was saved from demolition in 1991 when the Rogers County Historical Society purchased it and began restoring the 9,000 square foot home, which originally had six bedrooms and three bathrooms. Here is a video they produced:

The first floor kitchen, dining room, and ladies’ parlor are used as an active tea room for lunch and was quite busy during our visit, while the gentlemen’s parlor is now a gift shop. The foyer has one-inch octagonal porcelain tile, hand-laid by an Italian craftsman. We had earlier noticed the tile on the entry porch. The foyer also has marble wainscoting, while the wood in the home was bought from a World’s Fair. The pressed tin ceilings flow down to pressed tin walls, an unusual feature we noticed. 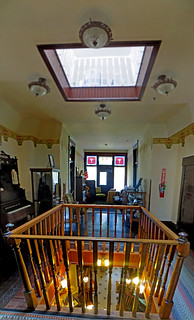 The foyer has an open central atrium forming a shaft to the upper two floors, topped by a skylight. This worked with the room door transoms as a heat chimney so that three gas fireplaces on the main floor could warm the other rooms. Since the first floor was filled by the tea room and gift shop, we soon climbed the old stairs to the second floor. They leaned, reminding me of the much larger old stairs at the Crescent Hotel in Eureka Springs.

Upstairs the atrium provided a nice visual connection between the floors and, as on the first floor, it was the centerpoint of two crossed corridors dividing the floor into quadrants. The floor was an intricate parquet, although rugs hid some damaged sections. I was glad to find that none of the turrets had been used as stairwells; each one formed an interesting addition to a bedroom.

The third floor was the most pleasant, being entirely devoted to a 3,000 square foot ballroom with towers and central skylight. This bright and cheerful space is rented out for parties and weddings.

We enjoyed our visit to the mansion and walked a half block northwest to the former Will Rogers Library, hoping to see the surrey with the fringe on top from the Broadway musical Oklahoma!, but it was closed. I later learned this museum is a work in progress and is open by appointment only. We had to satisfy ourselves with the Lynn Riggs Memorial statue out front. 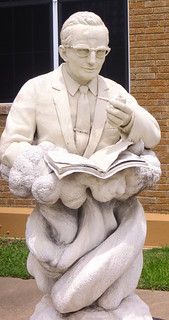 Lynn Riggs was born near Claremore and wrote Green Grow the Lilacs, the play upon which Oklahoma! was based. I’m amused to find he wrote the play while living in France on a Guggenheim Fellowship; maybe he was homesick. The statue of him is showing its age; the pages of his book are torn and I think he has skin cancer on his forehead. Not to mention how the poor fellow is growing up out of, um, lilacs? Lynn didn’t explain what was going on, he just sat and stared. It was time for us to venture over to a place I haven’t visited in decades, home of the world’s largest privately owned gun collection.

John Monroe Davis had run a sawmill in Arkansas before he moved to Claremore in 1917 and bought the Mason Hotel, which he and his wife steadily filled with guns, beer steins, and other items. He gave his collection of 11,000 guns and his wife Genevieve donated her collection of 1,200 beer steins and much more to the state in the 1960s, which built a 40,000 square foot museum to house and organize the stuff. J.M. wanted to be buried with his guns, so oddly enough both he and Genevieve are entombed in one of the rooms.

The collection has built up to 13,000 guns housed in displays which would stretch over a mile if laid end-to-end. I’m not very interested in guns, but I liked Ms. Davis’s old music boxes and John Rogers plaster statuettes; Rogers sold perhaps 80,000 of his plaster scenes back in the late 1800s. The museum is filled with tens of thousands of objects of interest, but you can watch a brief video tour of some highlights:

On our way through town we admired a couple of nice exterior wall murals by Steve Stephens. His flowers were pretty, but I really liked his train busting through a wall. We soon were headed northeast on old Route 66 towards Foyil, where we’d turn east and head a few miles over to tour Ed Galloway’s park of folk art.

Ed Galloway wanted to keep busy after he retired in 1937 to some land east of Foyil after teaching woodworking and building in wood and stone at a Sand Springs orphanage for over twenty years. For 11 years he built an enormous concrete totem: a sandstone cone perhaps sixty feet tall or more and of similar circumference, supported by a steel armature and covered with a concrete skin which he decorated with 200 bas-relief images of brightly colored Indian portraits, symbols, and animal figures. It sits on a sculpted turtle as its base and includes some more painting and reliefs on the first level of its interior. 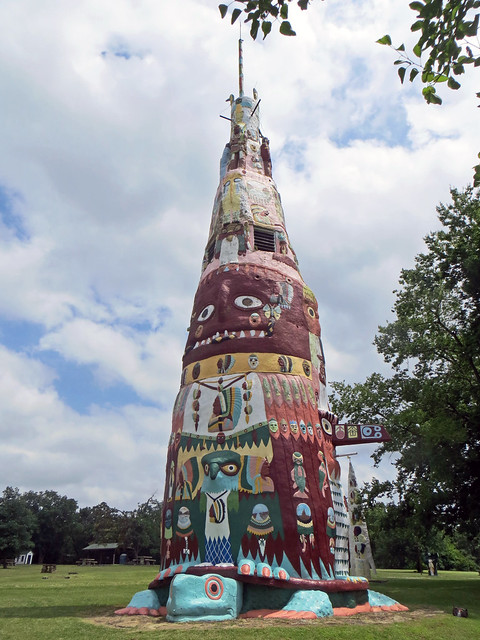 Ed also carved about 300 fiddles, each in a different type of wood, housing them in a nearby house which reflected his folk art. He passed away in 1962 and his Totem Pole Park fell into disrepair. In 1970 many of the items in his Fiddle House were stolen and never recovered, and eventually his house became a ruin. In the 1990s the Rogers County Historical Society acquired the property. The home was rebuilt and the Kansas Grassroots Art Association restored the various sculptures as well as his Fiddle House, which is now a gift shop to help maintain the property. The concrete sculptures require occasional repainting, and in 2010 Virginia Krugloff, a local artist and member of the historical society, repainted the totems. She was in her mid-70s and they only allowed her to climb up two levels of scaffolding on the main totem, so the upper part still needs repainting. What a gal! 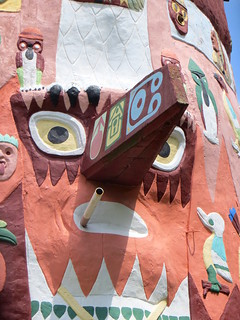 Wendy and I had fun looking at the imagery on the totem, and she was highly amused by the cigarette the face with the big nose was smoking, and the silly faces beside it. Another face was eating a lizard, but not all of the imagery is silly and some is well-executed for an untrained artist.

Unlike on my previous visits, the door into the totem pole was open, so Wendy posed in the doorway for me, with us noticing that her top matched the color of the supporting turtle pretty well. I took a shot up through the interior levels and posed in one of the windows. She took a nice shot of an arrowhead sculpture from the doorway.

The park has a much older cat which Ed carved from stone, various pillars, picnic tables, and more along with the Fiddle House, which we toured and where we chatted with a lady who lives on the grounds. There are about 15 of his original fiddles on display along with historical photos. 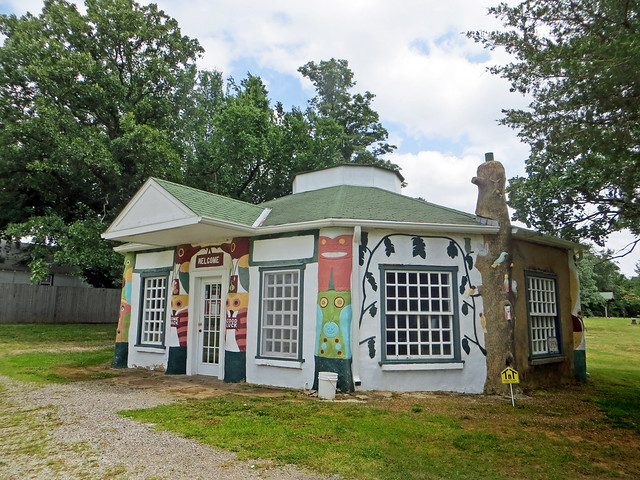 One story is how Ed’s wife Survilia “Villa” Hooton (Ed is on the far left in this photo, and his wife is next to him) once taunted him with her own variation of Joyce Kilmer’s poem Trees: “Totem poles are made by fools like thee, but only God can make a tree.” Galloway promptly crafted a 12-ft. concrete tree trunk, with holes for birds to live in; it is in the background of this shot. I found that one less than photogenic, but we did like his shorter tree and its grinning face matched Wendy’s as we headed back home through Chelsea, New Alluwe, and Nowata to complete our Rogers County roundabout.

3 Responses to Roundabout in Rogers County