A Hot Time on Turkey Mountain

Wendy and I plan to hike during our trip to Santa Fe, NM in a few weeks. As it had been a month since we’d been out on a real hike, we decided to rectify the situation with a loop on Turkey Mountain down in Tulsa. The forecast called for sun and temperatures in the mid-80s with strong winds, so Wendy wisely called for a hike mostly in shade. I selected Turkey Mountain since most of its trails, except for the Powerline one, are under tree cover. We fortified ourselves at El Chico and then headed over to the mountain to hit the trails.

There are several long trails paralleling the north-south ridge of the mountain. About a year ago Wendy and I hiked the yellow loop and a bit of the pink one; the yellow loop uses the Ho Chi and Ridge trails, and I’ve been on it multiple times. I’d also hiked the Hi Chi trail with some colleagues back in September 2012. I wanted something different on this foray into the urban wilderness, so I studied the very nice River Parks map of the venue, which was made possible by the GPS trail mapping of Ron Haveman, who is listed as #55 on the Tatur running club site. 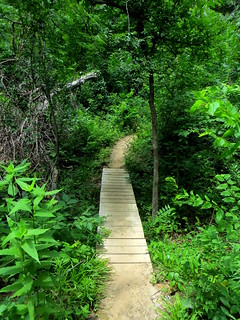 I opted to take the Lo Chi trail which runs along the shore of the Arkansas River down below the Ho Chi trail but above the paved River Parks trail. When the Lo Chi petered out, we could then climb up to the Ho Chi trail, turn around at the Spider area, and take another trail I’d not ventured down, the Millennium (presumably misspelled as Millenium on the map). I hoped to also follow the Enchanted Forest trail, but made a wrong turn today and instead we negotiated the final leg of our hike on the well-travelled blue trail.

Before setting out, we slathered on some sunscreen and sprayed ourselves with insect repellent. We headed due east on the paved River Parks West trail until I spied the turnoff for the Lo Chi trail, leading off northeast through the tall grass and weeds of a powerline cut. Thankfully it soon entered the forested slopes of the mountain. Two mountain bikers soon passed us and were the only other people we saw on the Lo Chi trail, besides a family who were exiting the trail as we left the paved trail. The trail runs below the tall bluff on which the more popular Ho Chi trail runs; we caught occasional glimpses of the bluff through this urban jungle. We saw a couple of ramps on the trail constructed for thrill-seeking bikers, and made use of one bridge. 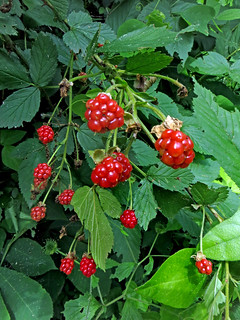 As usual, my gaze was directed ahead and above while Wendy more wisely watched where she stepped. That meant she spotted the berries and mushrooms along our trek to which I was mostly oblivious. We passed one large spray of blooms on the trail as it threaded through the close overgrowth. I was excited when the old Midland Valley tracks became visible to our right, later finding a short connector which allowed us to venture out on the rails. The Midland Valley line was built in 1904, part of a 277 mile-long railway along the Arkansas River from Hoye, Arkansas to Wichita, Kansas. Built to transport Arkansas coal, it instead flourished via the oil boom, serving the Glenpool, Burbank, and Bigheart oil fields. Today most of the old railroad is abandoned, and a 3.3 mile section of the line is now a trail linking Tulsa’s downtown with the River Parks.

An eye-level group of tree fungi caught my eye as we reached the end of the Lo Chi trail and faced the steep climb up the bluff to the main yellow trail on the Ho Chi. We paused for a breather alongside the main bluff face before tackling the next climb. The higher trail gave a better view of the nearby Arkansas River. For decades Tulsa has dreamed of constructing more low-water dams to turn the river from a wide swatch of sandbars into something more scenic, but that would be very expensive and require much planning and coordination. 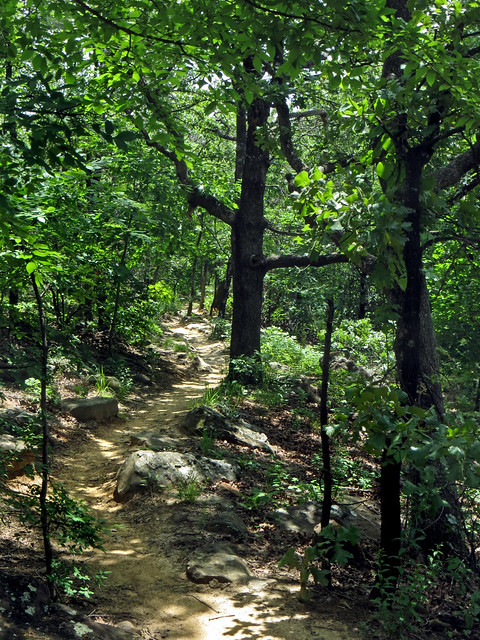 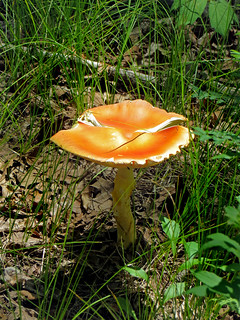 We reached the north end of the yellow trail loop and turned about, finding the Millennium trail as the planned alternate to the typical Ridge trail. I was very pleased with this change, as the Millennium trail was narrower, less travelled, and sometimes quite photogenic. A brief foray down an unmapped connector revealed a huge toadstool, while on the main path there was a white mushroom growing out from under a rock and other fungi shaped like a star and a heart.

We missed the intended Enchanted Forest trail to the south, instead following the sandy Blue Trail back to the parking area, where we cleaned up a bit before heading back north to Bartlesville.

That night we attended the Grand Finale Concert at OK Mozart.  We’d enjoyed excerpts from The Magic Flute on Wednesday, attended the Sarah Jarosz concert on Thursday, and this night would feature a rousing performance of Beethoven’s Symphony No. 9 in d minor by the festival’s Amici New York orchestra, joined in the spectacular final movement, featuring the Ode to Joy, by the Bartlesville Choral Society, additional choral groups from Stillwater and Tulsa, and four gifted vocal soloists who had sung semi-staged parts in The Magic Flute two days earlier. It was indeed a Grand Finale, with the Community Center thundering with the exuberant sounds of this miracle, which is beloved worldwide and was completed when Beethoven was completely deaf from tinnitus.

What a splendid day it was for us, sharing lunch at our favorite restaurant, followed by a nature hike, and capped off with the Beethoven’s most exciting symphony. Egad!

I enjoy day hikes, photography, podcasts, reading, web design, and technology. My wife Wendy and I work in the Bartlesville Public Schools in northeast Oklahoma, but this blog is outside the scope of our employment.
View all posts by Granger Meador →
This entry was posted in day hike, music, photos, video. Bookmark the permalink.