Posted on November 2, 2014 by Granger Meador 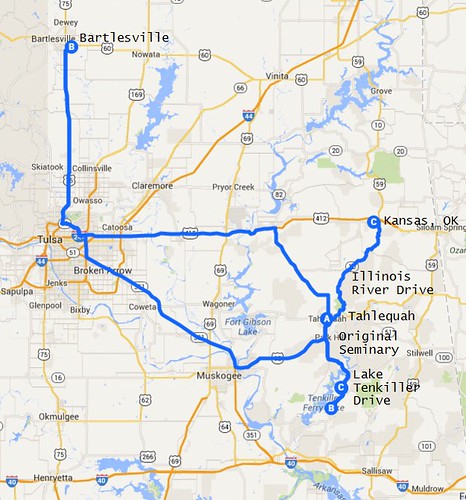 For over a year Wendy has wanted to take me to Tahlequah in the autumn to see the fall colors and experience the Northeastern State University (NSU) campus where she and many other of my fellow educators earned their teaching degrees. A “ghost tour” of the old Seminary Hall on the campus prompted us to visit on All Saints’ Day. The previous day we wore commencement caps and gowns for Halloween at the high school; Wendy wore a BHS graduate ensemble, while I was decked out in my master’s degree academic dress.

We enjoyed the trip, although the fall colors were only starting to show. Our first stop, just south of Tahlequah in Park Hill, was the site of the original Cherokee Female Seminary. Established in 1851, it was the first institute of higher learning exclusively for women in the United States west of the Mississippi River. The site is now the Cherokee Heritage Center, and some day Wendy and I shall return to enjoy its exhibits, including Diligwa, a recreation of a 1710 Cherokee village. But NSU was our primary target for the day, so we just examined the three columns which survived the seminary fire on Easter Day 1877. That fire would lead to the building of the larger new seminary six miles north, which was completed on Easter Day 1879 and is the origin for Northeastern State University. The bricks for both buildings were formed from clay from the sites and cooked in on-site kilns. 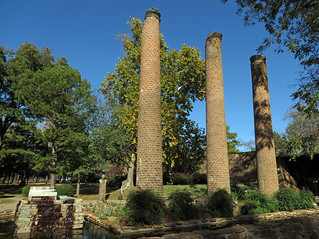 I loved the profusion of trees on the grounds and enjoyed our subsequent drive south on the east side of Lake Tenkiller. I have been to Tenkiller several times to hike portions of the Ankle Express Trail in Greenleaf State Park and Camp Gruber, but in 2010 found the Gum Springs Nature Trail had been abandoned. Wendy and I need to return to Tenkiller and try out the short Standing Rock Nature Trail north of the Carlisle Cove Area, the Buzzard Roost Trail at Cato Creek Landing, and Overlook Nature Trail at the Tenkiller Dam Overlook.

One of Wendy’s former jobs was performing telephone tech support and going out on computer service calls for Intellex. That took her to various towns around Tahlequah, including Keys, Cookson, and Ft. Gibson, which we drove through on this trip.

We drove south past Cookson before turning around to return north and head to the NSU campus. We parked near Seminary Hall, which we would return to hours later for the ghost tour, and walked down to Beta Pond, an area on the south edge of campus. It is in need of clean-up and better landscaping, but the sound of Tahlequah Creek was soothing, and I liked the shot I took of Wendy on a bridge above the creek. In the background of that shot is a small dugout which prompted some merriment from me. Tour guide Wendy was pointing out the NSU President’s home, which was in the background, but in the foreground was that dugout, and I commented that he really needed to move up. 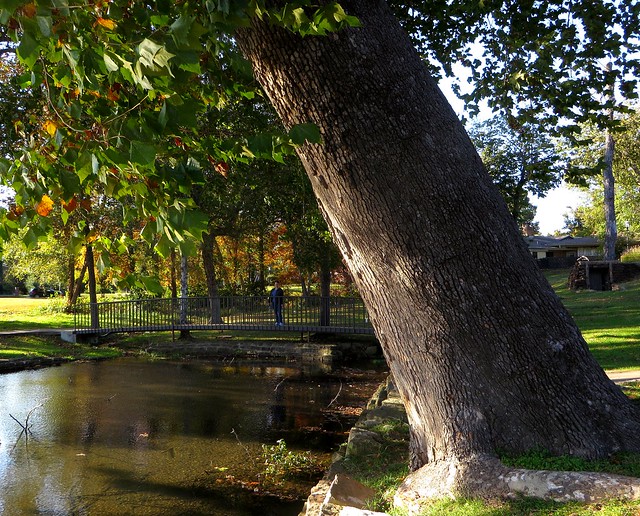 Nearby were two reconstructed columns, one from the original male seminary and the other from the original female seminary site we had visited earlier. In the background of the shot is today’s Seminary Hall. At the ghost tour that night, our guide would relate stories that if you walk between the columns the ghost girls of the seminary will follow you home or, if you are a student at NSU, you won’t graduate. Wendy and I bravely walked between the columns, but thus far no ghost girls have appeared at Meador Manor or her apartment. 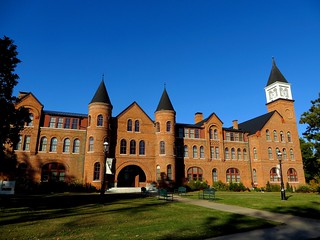 We walked over to Seminary Hall, but it was locked. The venerable building was completely remodeled in 1994 and 1995, as related in a campus history by Dr. Brad Agnew. He was Wendy’s history professor and also taught her AP US History teacher at Okmulgee High, Randy Hutchinson. Dr. Agnew speaks about seminary hall in an online video interview. Wendy enjoyed the story of a wild cat attacking a cabin at the site of what would later be Seminary Hall relayed by Beth Herrington in one of her interviews.

Wendy was repeatedly surprised by the many changes in Tahlequah since she was a student there, from the various restaurants where she had worked to new campus buildings. Decades ago she took a nice snapshot of autumn trees along a sidewalk and identified the spot as out in front of today’s Centennial Plaza, beyond the old archway sign. Happily, two rows of young trees have been planted so that future students can enjoy their fall colors.

Next, we drove a bit around campus and then headed north on highway 10 along the western edge of the scenic Illinois River. Some day we plan to turn off this stretch to hike the trails at the Nature Conservancy’s J.T. Nickel Preserve, but our only stop on this first foray was a walk down a ramp at No Head Hollow to see the river. We drove north along 10 all the way to the town of Kansas, Oklahoma. Along the way we made brief drive-throughs of some of the river access points, knowing that some day we may join some school colleagues on a float trip along the Illinois River, which Wendy frequently visited while attending NSU. 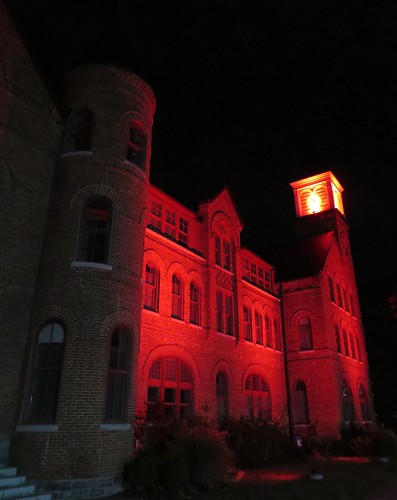 By the time we returned to Tahlequah, it was dinner time. We had pizza downtown just south of campus at Sam & Ella’s Chicken Palace. Given the name, I was careful not to order any eggs. Carrie Underwood, the American Idol singer, once worked there.

Seminary Hall was illumined in red lights as we joined the first tour group of the night to explore the dark corridors of its three floors and hear silly stories and learn a few tidbits about A. Florence Wilson, who led the seminary’s program of acculturation for Cherokee women from 1875 until 1901.

The guide told us Miss Wilson lost her fiancé in the Civil War and consequently always dressed entirely in black, and disliked men. Her ghost guards the stairs leading up to the dormitory floors to keep men out, and men who venture up there supposedly are nauseated and uncomfortable. Other than the lingering after-effects of eating too much at Chopsticks in Tulsa for lunch, I felt fine during our tour.

The guide claimed the rooms where Miss Wilson lived are haunted by her, causing male professors stationed in the modern offices there to seek other accommodations, leaving them for the use of their female colleagues.

We also saw, despite the poor lighting, glimpses of the mural on the second floor landing created by three of the Kiowa Five group of painters in the Great Depression. The guide reported the painters were spooked by sounds of running and laughing children when they painted at night (to avoid day classes), splattering their paint about.

The various tales were silly but fun. Wendy and I had hoped for more history, but thankfully there are good online articles. Back outside in the cold, the moon was peeking out between the clouds as we drove home, determined to return to Tahlequah for future hikes and exploration along Tenkiller Ferry Lake and the Illinois River.