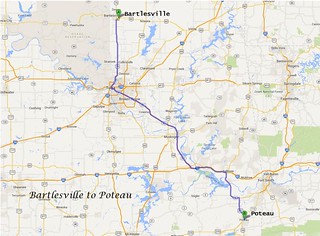 Wendy and I spent the first day of Fall Break 2014 relaxing, although she was more productive than I was, since she worked on her triptych inspired by the exterior of the Kimo theater in Albuquerque from our visit there in early July. On Friday afternoon we drove south to Poteau for a two-night stay focused on a hike on the Winding Stairs Trail in the Albert Pike area a couple of hours southeast of there in the Ouachitas of southeastern Arkansas.

I’ve been to Poteau many times since I began my day hikes in earnest over five years ago. The etymology is French for “post”, although this was the first time I heard a terrible story about the origin of its name. Wendy was laughing as she shared:

Poteau and the Poteau River got their name from an old Indian who stumped his toe and exclaimed, “MY PO TOE!” 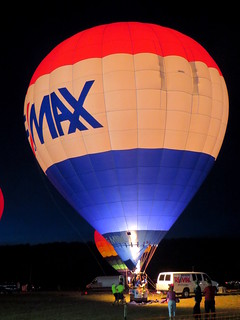 I did manage to surprise Wendy, who knew we were going to stay in Poteau but had no idea their annual Balloon Festival was going on. We drove straight to a lot adjacent to the fairgrounds and paid $5 for our wristbands. A couple of balloons were taking off as we walked in, with two more inflating. A long line of folks had formed, all of them waiting for the balloons to begin bounding up and down on tethers, carrying thrill-seekers up into the air. Later we would see the line had dwindled and tried to pay $10 each for a ride, but it was growing too dark for the lifts, so we had to forego that. The darkness, however, brought the balloon glow, with six balloons’ burners making them blink brightly in the night.

As we entered the festival, on one side of the road a huge monster truck, the Mean Machine, was bouncing riders about a field.

Farther along, a small carnival was underway, and we could see and hear a motocross rally over in the grandstand. Wendy and I walked over to the motocross, attracted by a cyclist doing high leaps across the field using big ramps. I was hoping to use my new iPhone 6’s Slo-Mo feature to video the high jumps, but they were done with those by the time we reached the stands, so I had to settle for slo-mo of kids popping wheelies and their leader doing low jumps off one end of the big ramp.

As we looked out over the carnival from the grandstand, Wendy confessed she had never been on a carnival ride, other than perhaps the train at Bartlesville’s Kiddie Park. I grinned broadly, pointing out different rides we might try. The tame ones she might consider included a dragon roller coaster, Tornado whirling ride, and the Tropical Swinger. That last one was her first choice, after which we braved the Tornado.

We had a lot of fun at the little festival, but worked up an appetite. We drove downtown to Warehouse Willy’s, where the wait was long, and our tummies were growling before we dined. My ribeye steak was excellent.

On Saturday we fueled up the car, passing by what Wendy termed a downtown Dementor along the way. It scared us so much we drove 120 miles southeast into the Cossatot Mountains of Arkansas to reach the Albert Pike Recreation Area’s Winding Stairs Trail. I hiked that trail four years ago, noting the tremendous beauty of the Little Missouri River after fording it a couple of miles from the trailhead. I hoped we might be able to reach that area on this trip, but knew it was a long ways in, and the water level on the Little Missouri might block us, given that Wendy had not ever forded a river before. It turned out the water was up enough that we turned back at that ford for this trip.

We travelled south from Poteau, passing Heavener and the Talimena Skyline Drive before turning east to run along the south edge of the Ouachitas before turning north to reach the Cossatot Mountains. The roads in Arkansas to the trailhead were nearly deserted, as was the locked-up Albert Pike day use area, but we found about two dozen vehicles parked at the trailhead located a couple of miles up the steep and winding gravel road from the day use area. Not far from the trailhead, Wendy pointed out a tree limb beside the trail that resembled a striking snake. 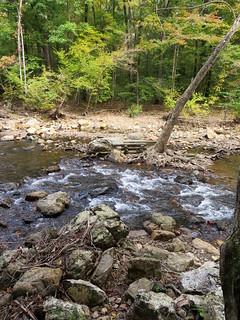 Four years onward from the disastrous flood of June 2010, the Forest Service has almost abandoned Albert Pike as litigation over the deaths there continues. That includes not rebuilding the much-needed bridge over Blaylock Creek. The water was up, and I deeply regretted forgetting to bring our trekking poles along on the trip. Wendy and I found some downed branches we used for poles, but neither of us was successful in negotiating the rocks across the creek without dunking our boots and pant legs. On the far side, Wendy stripped off her boots and wrung out her socks, but I just squished along. 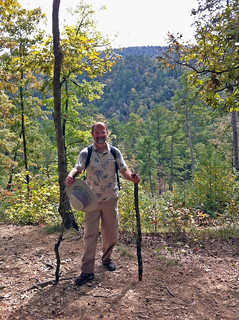 Above the Little Missouri

About 3/4 mile from the trailhead, we had to make a steep ascent and descent over a 3/10 mile stretch. The trail then levelled out, with us passing a large white mushroom with which Wendy practiced her putting skills, whacking at it with a long stick. The Little Missouri became visible far below us to the east, and I posed in my wet boots and pants.

Wendy was on the hunt for rocks with crystals throughout our hike and spotted a set of mushrooms with a millipede on top. I was preoccupied, as usual, with vistas, enjoying the long views above the Little Missouri as the trail turned and slowly descended. As we approached the river ford, across the shimmering water I spied a couple of fishermen. 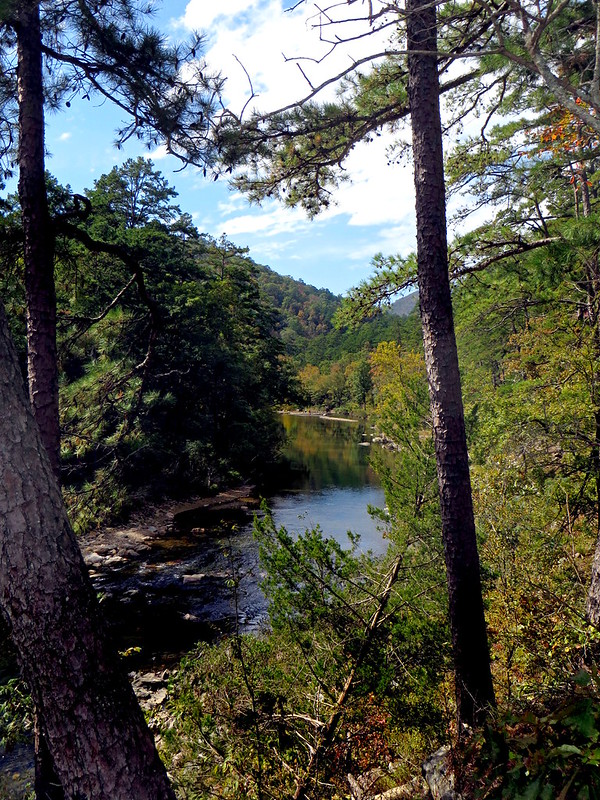 Wendy and I were hungry by the time we reached the river ford, so we clambered along to a side stream where four years earlier I had noted how the cut rocks looked like stacked blocks. It was wetter this time, with a larger stream of water running down the rock steps. We ate lunch, and upstream I found a nice waterfall and pool. I shot a slo-mo video of the falls with my iPhone and admired the long corkscrew root of a tree embedded in the side of the wall.

Meanwhile, Wendy had been finding rocks with embedded shiny mineral deposits. After our trip, she cleaned the rocks, and I got shots of them. 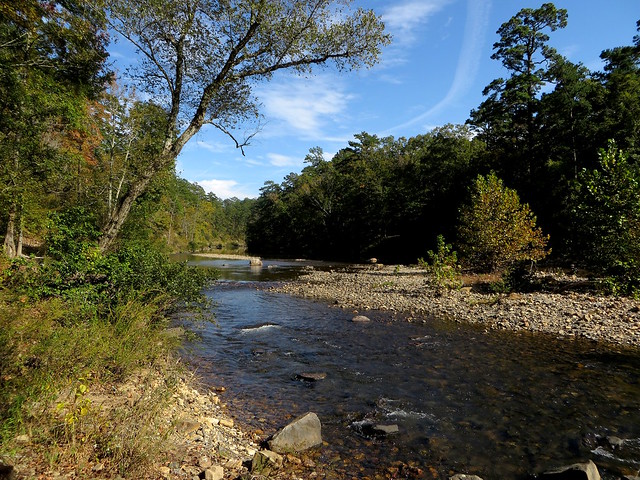 Wet ford across the Little Missouri

At one of several trailside campsites I found a side trail leading down to the water. The bedding planes were tilted entirely vertical there, exposing many layers of sedimentary rock we could easily break off. They made wonderful skipping stones; I could get six or more skips out of some of them. 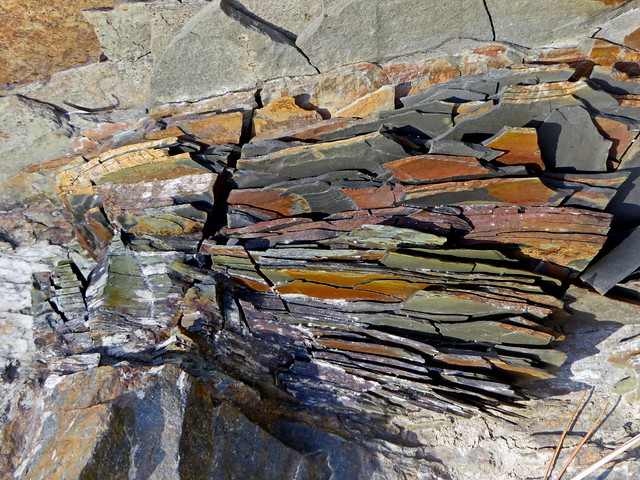 Wendy spotted some more sparkling mineral deposits and later along the trail spotted some mushrooms growing inside a rotting log.

We managed to immerse our boots again when fording Blaylock Creek, prompting Wendy to haul a few big rocks from the shore out into the stream to try and build some stepping stones for later hikers. I assisted a bit, and then we squished our way back to the car. We were grateful to shuck our soaked boots and socks.

I decided to take a different route back to Poteau, allowing Trixie the GPS Navigatrix to lead us along gravel forest roads north out of Albert Pike. She led us far off to the east for some reason, which meant a long slow drive, but it was scenic with one high glimpse of mountains beyond.

We finally rolled into Poteau to change clothes and clean up before a late dinner at Mazzio’s. Our long hike made the pizza quite tasty. 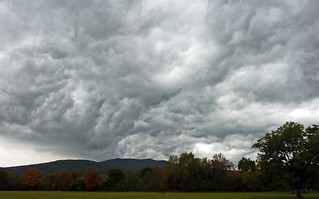 The local chamber of commerce bills Cavanal Hill on the outskirts of Poteau as the world’s highest hill, claiming that at 1,999 feet it is just a foot short of mountain status. That is a bit of marketing hooey, but I do like how Cavanal bulks up outside of town, and I remember well how clouds above it four years ago made it resemble a smoking volcano.

Surprisingly, I’d never driven up the hill despite visiting Poteau many times. So the morning after our big hike Wendy and I wound our way up Witteville Drive, named after the old coal mining operation on Cavanal in the early 1900s. The first road up the hill was built by a Poteau man, Sam Sorrels, following about the same six-mile route as the present Witteville Drive. Back in the day, Mr. Sorrels walked and showed the bulldozer operator where he wanted the road built.

The top of Cavanal Hill is now festooned with broadcast antennas, but there is a shelter park amidst them which offers a panoramic view southeast over the town. I laughed at the shoes someone had tossed over a high wire, and Wendy and I exchanged photos with another couple in front of a rock heralding the hill’s supposed height. 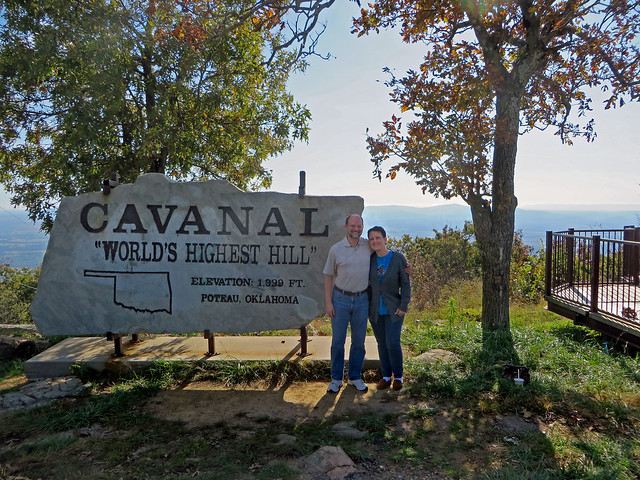 The drive back down the hill provided a lovely panorama north and east.

We drove back to Bartlesville, where I inserted some boot dryers my mother gave me into Wendy’s boots and laid both pairs of boots out to dry in the backyard, complemented by roses from the bushes Wendy had planted by my patio. We enjoyed our latest outing to southeast Oklahoma and southwest Arkansas and look forward to many happy returns.