I suppose our first honeymoon hotel was technically in Oklahoma City, since we spent the first night at our favorite place to stay in OKC: the Doubletree by Hilton near the airport. It is only a 15 minute drive from there north along Meridian Avenue to my parents’ home in the Windsor Hills neighborhood. When we first began staying at the hotel, it was a Cambria Suites. We liked its room décor, spacious bathrooms, and luxurious bedding. “Suite” is used loosely by hotels these days; I don’t regard a separate area for the bed that only has a divider instead of a real wall and door to actually qualify as a suite. These days I usually book us in a real suite with separate bedroom since Wendy is a night owl who likes to stay up later than I do.

The new carpet at our hotel

Hilton bought out the hotel later and only slightly changed the room décor. Lately they’ve been ripping apart the dining area, lobby, and hallway carpeting. (What is it with hotels’ carpeting? Is there a law that it must be incredibly ugly? I know they are trying to disguise heavy traffic patterns, but I’ve only seen a few examples of nice-looking hotel carpet. The Doubletree’s new corridor carpet, which looks like a signal wave pattern, is not one of them.) It is a testament to the hotel’s room design that we’ve continued to stay there even with that mess, including road delays as a long stretch of Meridian Avenue is being reconstructed south of Interstate 40.

Our “mini-suite” in Troutdale

In my mind, our honeymoon really began in the Pacific Northwest. We spent the first four nights at the Best Western Plus Cascade Inn & Suites in Troutdale. It also isn’t honest about “suite” – calling an extra long room narrowed in one spot by short wall segments a “mini-suite” is stretching the truth. But I still booked the room there because everything in liberal, popular Portland is expensive, particularly the hotels. I avoided the pricey downtown hotels with their valet parking and instead picked the Best Western over in Troutdale. We like Best Westerns, so long as they have interior corridors, because they are usually clean and fairly quiet and not too hard on the wallet.

I picked Troutdale because the hotel was close to the airport and near the western terminus of the historic Columbia River Gorge scenic highway. Wendy the night owl doesn’t prefer to get up early, and for the day we planned to take that long scenic drive, I did not want us to waste a lot of daylight threading our way through Portland over to the old scenic road.

But the big draw for Wendy in Portland was the International Rose Test Garden. We had thought we’d do that on Sunday, our first full day in the area, but reconsidered since Google said Mondays had far fewer visitors than Sundays. Now, mind you, the Monday in question would be the Independence Day holiday, but we opted to wait. So our first full day in the Portland area was spent downtown visiting the regular Portland Saturday Market (which also operates on Sundays) and Powell’s City of Books, making a stop at the Mount Hood viewpoint in Mount Tabor Park, and walking the trails of Glenn Otto Park in Troutdale.

Things Were Smokin’ at the Market

Portlandia is a comedy show set in the city

There’s a reason they make a sketch comedy television series in and about Portland, called Portlandia. The Pacific Northwest, especially Portland, can be as laughably liberal as Oklahoma and the states to the southeast of it can be comedically conservative. I prefer the former, but live in the latter. But I do have my limits, and the stink of reefers that was wafting throughout areas of downtown Portland was unwelcome to my nostrils. My very conservative home state has repeatedly failed to produce enough signatures for ballot initiatives to promote even medical uses of marijuana, although neighboring Colorado has recently legalized it for recreational use, as have Alaska, Washington State, and, of course, Oregon.

So Wendy and I were taken aback to see stores across both Oregon and Washington, dispensaries emblazoned with green crosses advertising marijuana. As teachers who are supposed to be alert for misbehaving students, our drug detecting senses were alerting pretty often in downtown Portland.

It was a 15 mile drive westward from our hotel in Troutdale to Portland’s Old Town, which lies along the western shore of the Willamette River. But we made a detour in our rental Nissan Sentra to a Biscuits Cafe in Gresham for a late breakfast. The place was very busy, and the food explained why.

We then crossed the Willamette to visit the Saturday Market, which is mostly folks selling hand-made arts and crafts. In quest of a restroom, we threaded our way through the event for relief. Then we could weave our way amongst the stalls. My favorite was intricate framed string art by Pterylae Designs. I noted that some of the food booths were backed up against a Municipal Sewage Pumping Plant. It seemed efficient, if not appetizing! I snapped a busker making a wild Independence Day hat for a youngster and enjoyed getting a shot of the streetcar tracks angling along 1st Street near Skidmore Fountain.

Don’t look behind the food booth

The City of Books 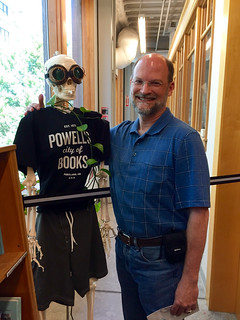 A visit to downtown Portland is not complete without touring Powell’s City of Books, the largest used and new bookstore in the world. The original location in the Pearl District on Burnside takes up an entire city block. Its nine color-coded rooms together hold about one million books, divided into a staggering 3,500 sections. The store’s parking garage was full, so we parked a block away in an underground lot that let us exit through a Whole Foods Market.

Wendy bought a few books on roses, naturally, while I hung out with a guy who was so overwhelmed that he forgot to eat. I enjoy browsing a bookstore, so when in Tulsa I’m careful to buy magazines and picture books and the like at Barnes and Noble to help keep them going (I so miss Borders!). But regular readers of the blog know that since 2008 I have preferred reading books on a long line of e-ink Kindles; my current and fifth Kindle is their Voyage model. On this trip it was very nice to be able to quickly shift about to continue reading a book on the Kindle, then my iPad, and even sometimes on my iPhone. And it was pretty darn nice to get to read some books, for that matter. Back home I’m always inundated with school-related work, so the honeymoon was a great chance to instead concentrate on relaxing and touring with my bride.

On the way back to the car, we stopped in at Storables, where Wendy enjoyed browsing. We’ve had home organization on our minds a lot recently, with her moving into Meador Manor from her nearby apartment. She is a tremendous organizer. I’m pretty organized in some ways, but Wendy puts me to shame.

One of my discoveries on a previous trip to Portland was the nice view of Mount Hood from Mount Tabor Park a few miles due east of downtown Portland, on the other side of the Willamette River. The city fathers built a park and reservoir up there, not realizing they were building on an extinct volcano. The Tabor cinder cone is part of the Boring Lava Field, an extensive network of cinder cones and small shield volcanoes ranging from Boring, Oregon to southwest Washington, and dating to the Plio-Pleistocene era. The lava field has been extinct for over 300,000 years, and the cinder cone now rises about 400 feet above the surrounding landscape, providing a nice view of Mount Hood, the huge snow-capped stratovolcano 45 miles away to the southeast. Mount Hood’s last major eruption was 230 years ago. 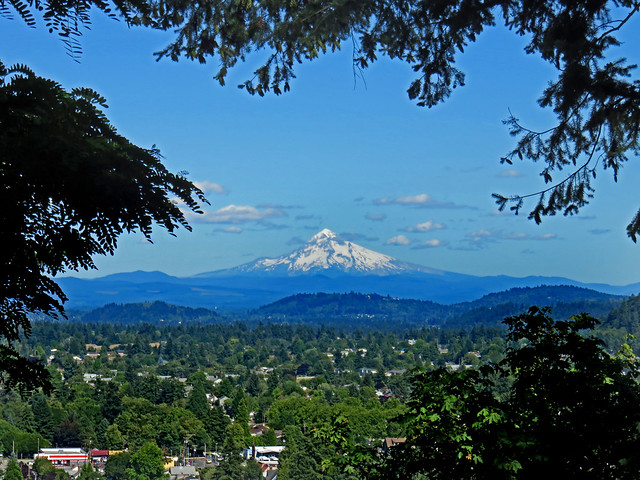 Dinner and a Walk on Cold Ashes

Dinner was at another chain restaurant, a Shari’s, where we enjoyed following our entrées with pie; Wendy particularly liked her slice of marionberry pie. We needed to walk after all of that food, so I drove us back to our hotel in Troutdale and then explored the roads east of there, discovering the western terminus of the Columbia River Gorge Scenic Byway which we’d be driving along in a few days. It led through downtown Troutdale and passed Glenn Otto Park right before it crossed the Sandy River. The park is nestled between that river and Beaver Creek. It was clear from the folks striding through the parking lot that the park afforded river access and had some trails, so I pulled in. 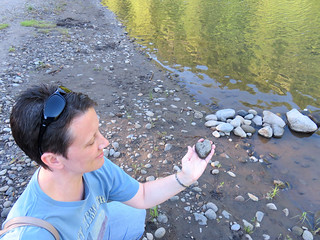 I had told Wendy that one odd thing about hiking in the Pacific Northwest is how you always find yourself treading on ash and other volcanic debris. This was a great place to illustrate that. We took off down a trail, noting the ferns and other vegetation unfamiliar to us plains folk. Wendy marveled at the abundant ivy as we found various trails leading to the Sandy River. Folks were out enjoying the cool water, floating by and yes, smoking weed.

Wendy the rock hound had a blast looking at the rocks and found a heart rock pretty quickly. The sand was really just ash, and some rocks were quite volcanic in appearance. Across the river I could hear folks dining on a restaurant patio.

< Honeymoon, Day 1: Planning for Portland and Beyond | Other Honeymoon Posts