Sorry for the long delay in resuming the posts about our honeymoon, but this school year is the most hectic I’ve ever had. I’m still teaching almost 80 students in three classes while directing a Chromebooks pilot project across 13 English classrooms at the high school, directing a pilot year of the Canvas learning management system at our school, handling district communications, and chairing both the science and STEM departments. That keeps me hopping, but I’m finally ready to post Day 3 of our honeymoon. Each weekend I hope to post about another day of our honeymoon. Enjoy!

When Wendy and I were considering possible dates for our wedding and subsequent anniversaries, I knew it should be summer when we schoolteachers could travel. Wendy lobbied for July 4: “We could have fireworks on our anniversary every year!”

But I resisted, not wanting our anniversary to coincide with holiday closings if we were out and about. I’m also not fond of the often startling loud pops and bangs of neighborhood fireworks around Independence Day. So I suggested and Wendy graciously accepted July 1 as a nice easy date to remember that’s still pretty close, temporally speaking, to the annual fireworks displays.

Thus we found ourselves in Portland on Independence Day, anxious to visit the International Rose Test Garden. I’d visited the adjacent Japanese Garden in 2009, not paying particular attention to its neighbor. But I remembered it when I began dating Wendy the rose lover, and I was not surprised when she once told me that on her bucket list was visiting the famous rose garden in Portland.

The History of the Garden

Henry Pittock in his Royal Rosarian outfit in 1916

Portland’s love of roses dates back to the late 1800s. The Portland Rose Society was founded in 1889 by Georgiana Burton Pittock, the wife of newspaper publisher Henry Pittock. She and her husband helped ensure that almost half a million bushes of the then-popular Madame Caroline Testout hybrid tea rose were planted along Portland’s sidewalks. By 1905 Portland had 200 miles of rose-bordered streets.

When World War I broke out, Jesse A. Currey, rose hobbyist and Sunday editor of the Oregon Journal, became alarmed that the hybrid roses grown in Europe would be destroyed in the bombings. He convinced city officials to institute a rose test garden by 1917, situated in the hills west of downtown Portland. English hybridists began sending over roses, and in 1921 Florence Holmes Gerke, the city’s landscape architect, designed the garden and its amphitheatre. The garden was dedicated in 1924.

The garden has several sections. There’s the Royal Rosarian Garden which is home to namesake roses of all past Prime Ministers of that civic group whose members are greeters and ambassadors for Portland. Henry Pittock was one of the founders. The Shakespeare Garden was relocated from another park in 1945, and originally intended to only include herbs, trees, and flowers mentioned in Shakespeare’s plays. (A similar odd goal, of bringing to American every bird mentioned in Shakespeare’s play, afflicted our nation with the starling.) Nowadays that section contains roses named after characters in the plays and features a relevant quote from the bard,”Of all flowers methinks a rose is best.”

In 1970 a Gold Award garden was established, filled with roses honored annually since 1919 by the city’s award for best new rose variety. The Miniature Rose Garden followed in 1975 as one of six testing grounds by the American Rose Society. For decades the garden hosted All American Rose Selections trials, which tested the same roses in gardens across the nation. But that effort died out, so in 2013 the American Garden Rose Selections began, which recognizes roses that are easy to care for, disease resistant, and suitable for different regions of the country. 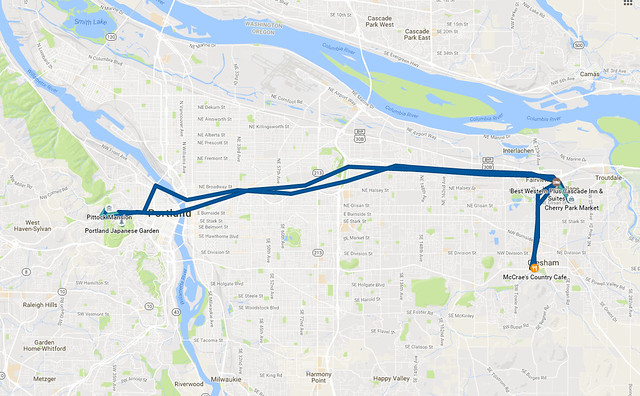 We had breakfast at McCrae’s Country Cafe in Gresham and drove over to the gardens, arriving there around 11:30 a.m. The parking lots were packed, so I drove up a steep side street and parked in a trail lot. As we made our way down, we passed another lot where a couple was gloomily inspecting their car. Someone had smashed one of the windows to break in. Wendy and I had not left anything of value visible in our rental car, so we hoped any thieves would spare it.

We spent three hours at the garden, admiring and photographing the specimens before indulging in a late lunch of hot dogs from a food stand. We were hardly alone; throngs of tourists from various nations scampered about, taking varying levels of interest in the flowers. One visitor’s hair was as showy as some of the roses.

The grounds are simply awash in roses, mostly planted in rows that are two bushes deep for ready access. There are some nice archways of climbing roses as well. To one side of the garden is a hillside amphitheater, thankfully more grass than stone and in better shape than most such venues these days.

A collage of garden pics

Some standouts for me

Wendy is the rose expert, so she worked up a separate post about the various roses we saw in the Pacific Northwest. She highlighted the ones she was thrilled to finally see in person, some she’d never heard of, and the real showstoppers. For this post, I made a couple of collages of my favorite rose shots from our Independence Day visit.

After touring the rose garden, we fled the crowds rather than try to take in the recently reopened Japanese Garden. I had a memorable walk there back in 2009, enjoying the beautiful and contemplative surroundings. The holiday crowds ensured that peace would be hard to find this time around, so I set it aside for some future vacation.

So we climbed back up the hillside to our car, relieved to find it unmolested by thieves. Back in 2006, I’d visited the grounds of the Pittock Mansion, which graced a nearby high hillside. I drove us over there to take in the view.

Henry Pittock built the French Renaissance-style château on the west hills of the city, two miles west of downtown Portland, in 1914. He was born in England but raised in Pittsburgh, Pennsylvania where he apprenticed in his father’s print shop. He left there at age 17 to travel on the Oregon Trail by wagon train in 1853. He couldn’t get a job at the largest newspaper in the territory over in Oregon City but landed a meager job as a typesetter for Portland’s weekly Oregonian. For six months his lodgings were blankets he spread out below the front counter of the shop.

He married Georgiana, the daughter of a flour mill owner who had also traveled to Oregon by wagon train. They raised five children in a small house on a block of land he had bought for $300 in 1856. He held onto that land, which proved a wise investment: Henry leased it out in 1912 for $8.3 million.

Henry became editor and publisher of the weekly, making it into a daily newspaper. He built it up by ensuring that he brought news about the Civil War to Portland days ahead of his competitors. Henry was an outdoorsman, participating in bicycling and mountaineering clubs. He climbed Mt. Hood four times. Georgiana loved gardening and kept a terraced flower garden at the mansion covered with every kind of flower imaginable. She originated Portland’s annual Rose Festival.

As often happens with palatial homes in America, Henry and Georgiana actually enjoyed their grand new home in the hills for only a few years. Georgiana died in 1918, and Henry passed eight months later. The property remained in the family for decades, although they struggled to maintain it. It was placed on the market in 1958 and sat empty. Windows were blown out and roof tiles dislodged in a large storm in 1962, leaving the interior exposed to the elements for 18 months. Developers planned to raze it and put in a subdivision. Thankfully the city and private donations stepped in to purchase it and save it for posterity. Although I’ve never ventured inside, an Oregon Live post has lots of interior photos. Only a few of the furnishings are original, but they do have Henry’s small bed. I’m reminded of Frank Phillips’ even smaller bed at his Woolaroc lodge.

The mansion grounds were busy with families out for a stroll. The estate was 46 acres and is now a park that connects to miles of trails wandering the surrounding steep hills. Wendy and I walked out for the great view of the city below, and then walked the old drive to enjoy the interesting plants. 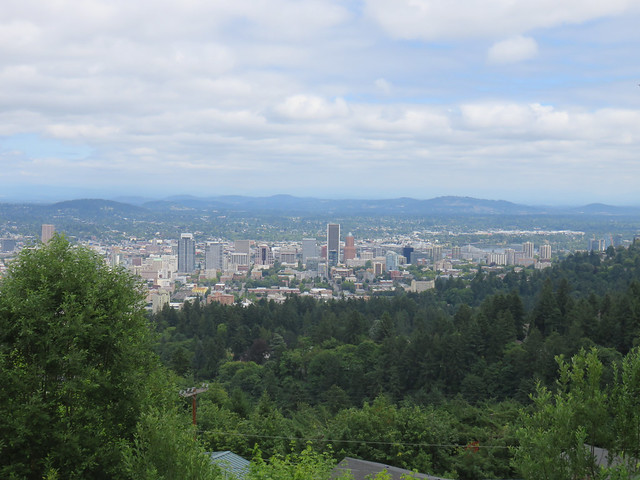 View of Portland from Pittock Mansion

We walked partway down a trail, but were bushed and tired of our fellow tourists. So we traipsed back up to the car and fled east back to our hotel.

In scouting out dinner, I was delighted to discover there was a Godfather’s Pizza less than a mile from our hotel. I have many fond memories of eating at the long-gone franchise on Campus Corner at the University of Oklahoma. The next day we would venture out for a long drive on the historic Columbia River Gorge Scenic Highway.

I enjoy day hikes, photography, podcasts, reading, web design, and technology. My wife Wendy and I work in the Bartlesville Public Schools in northeast Oklahoma, but this blog is outside the scope of our employment.
View all posts by Granger Meador →
This entry was posted in photos, roses, travel. Bookmark the permalink.