After breakfast on Day 6, it was time to begin the homeward journey. We still had new sites to see in the days to come, including a hike at a monument we had never visited, a volcano and ice cave, and a visit to Santa Fe. But Day 6 was focused on rocks for the ladies.

Both Wendy and Betty love stones, including petrified wood. We had whetted their appetites with our visit to the north end of the Petrified Forest a few days earlier. It was time to take them to Holbrook, Arizona near the south end of the Petrified Forest. That town has several rock shops that boast ample amounts of legally acquired petrified wood from the region outside of the national park. 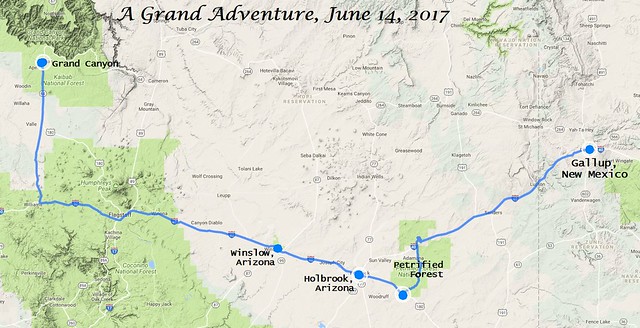 Taking it easy in Winslow, Arizona

So we headed south on Highway 64 and then east on Interstate 40, back through the south end of Flagstaff toward Holbrook. That was a 172 mile, 2.5 hour drive. So we made a couple of pit stops, including my decision to pull off at Winslow, Arizona. I was influenced by a song by Jackson Browne and Glenn Frey:

Well, I’m a standing on a corner in Winslow, Arizona
and such a fine sight to see.
It’s a girl, my Lord, in a flatbed Ford
slowin’ down to take a look at me.

I was fortunate to see Glenn Frey perform Take It Easy with the Eagles in Tulsa’s BOK Center back in 2013, thanks to board of education member Rick Boswell, whose family generously invited me to join them at that stop on the History of the Eagles tour. The song was the group’s first single back in 1972. Little did the Boswells and I know in 2013 that we would lose Glenn Frey in January 2016 due to complications from rheumatoid arthritis.

Back in 1999, Winslow built Standin’ on the Corner Park on a street corner, with a mural and a statue of a young man with a guitar. That was enough to get me to drive the historic Route 66 through downtown, which was bypassed by I-40 in the late 1970s. 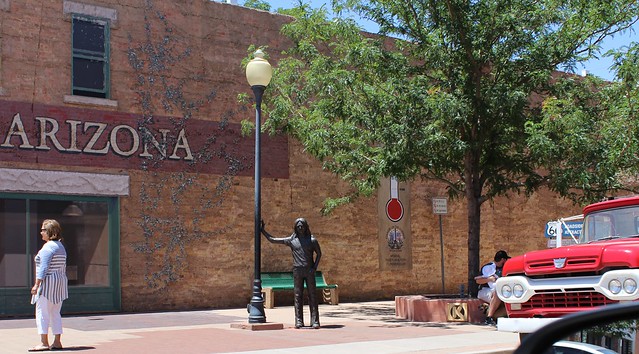 Standing on a corner in Winslow, Arizona

There was a crowd of people taking photos on the street corner, with Take It Easy playing on a speaker. I didn’t want to stop and fight the crowd for a picture, but was able to capture a shot of a new statue leaning on a nearby lamppost…one of Glenn Frey which was erected in June 2016. Take it easy, Glenn.

The Hendersons were separated from us in the traffic in downtown Winslow. It took awhile for us to rendezvous, and  I took the opportunity to look at La Posada, the last of the great railroad Harvey Hotels. It was built in 1929 as the final link in a chain of hotels for the southwest tourist trade. Architect Mary Colter considered it her finest work.

The Great Depression and the end of the passenger train era doomed La Posada, and it closed by the end of the 1950s. The railroad auctioned off its furnishings, which Colter had hand-picked, in 1959. By then she was 89 and sorely disappointed, saying, “There’s such a thing as living too long.”

The railroad hid the building’s interior beauty, partitioning it into office space. It eventually tried to get rid of the property by offering it to the city for $1 in 1992, but the city declined. Local residents Marie La Mar and Janice Griffin applied for and received a $350,000 federal grant to save the building. When asked how they expected to raise the required matching funds, they replied, “By the grace of God and the spirit of Mary Colter.”

College student Allen Affeldt answered the call, securing seed money from a backer to provide the $150,000 match required for the grant. Affeldt, his wife, her brother, and a college friend moved into the hotel and began to restore it. Years of work have brought La Posada back to life: “The gardens are back, guest rooms are open, and fireplaces, faux-adobe walls, arched ceilings, and period furnishings await the visitor.” 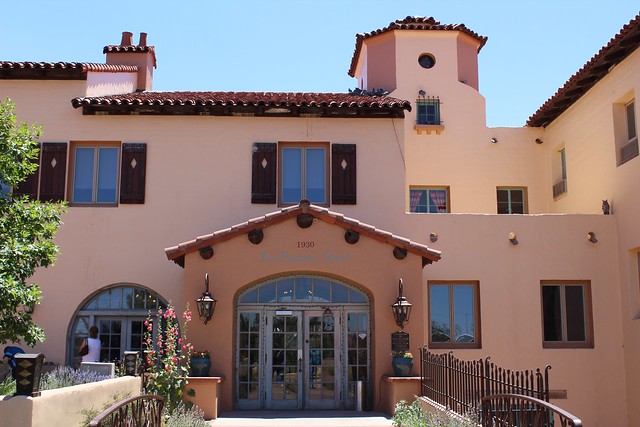 Wendy posed by the charming entry to the grounds. The pastel front facade is beautiful, with a lovely desert garden out front, complete with braying donkey. The cool interior looks great, too, with much attention to detail.

Artwork is featured in multiple public rooms, with many intriguing works by Tina Mion. I was struck by the often humorous political content in her Ladies First series of paintings of the wives of U.S. Presidents; this was art with a message. Her The Ace of Clubs painting of Mary Todd Lincoln was quite striking, with its slot machine imagery regarding that troubled soul. 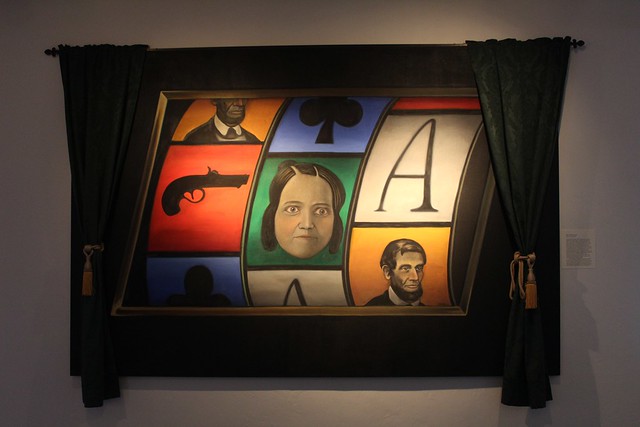 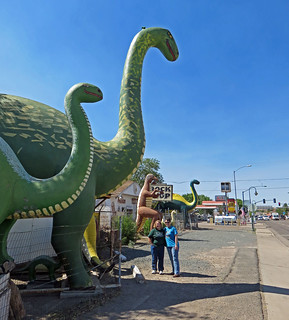 It was too soon after breakfast to stay for lunch, so we left La Posada and headed east to Holbrook, where we had lunch at Tom & Suzie’s Diner. My initial plan after lunch was to let the ladies scrounge through the rocks at the Rainbow Rock Shop while John and I enjoyed the silly dinosaurs outside.

Sadly, the dinosaurs were there, but owner Adam Luna was not. John inquired at a western wear store on the corner, and reported back that the rock shop had reportedly been closed for months. We did not despair, since just down the road was a large and professional operation, Jim Gray’s Petrified Wood Company.

Jim and Cathy Gray started the Petrified Wood Company more than 48 years ago. They own the mineral rights to several sections of land near the Petrified Forest National Park. They do their own digging, cutting and polishing, creating full rounds, tabletops and bookends, and more. Their family-run huge store is packed with beautiful stones of all types, with quite reasonable prices.

Wendy and Betty had a blast, scouring the comfortable air-conditioned store before venturing outside to spend a long time in the hot sun trawling through hot piles of unpolished rough cut petrified stone, priced at two dollars per pound. John and I moseyed around inside the cool store, and he mentioned enjoying watching a fellow have a huge petrified stone loaded into a pickup, with what appeared to be his wife nearby. She was watching the operation with an expression that told its own story. Fortunately for John and me, Betty and Wendy selected small stones as their acquisitions.

Through the Petrified Forest 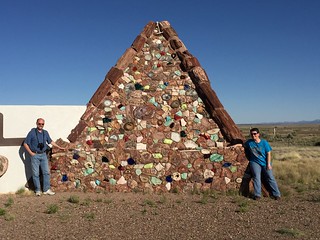 It was a few miles eastward on Highway 180 to the south entry to Petrified Forest National Park. We had only covered its northern tip in our earlier visit, so now we would drive all of the way through the park to see more of the landscape. We stopped at the Crystal Forest Museum & Gifts just outside the park, not to shop, but to pose by their pyramidal display of stones and crystals.

We had spent a long time at the rock shop, and it was getting quite warm, so we did not stop to walk around sites in the Petrified Forest, but dallied along the drive through park, snapping photos of the varied terrain.

Driving through a weird eroded terrain

Eroded layers in the Petrified Forest

Out by I-40 we saw a 1932 Studebaker shell placed where historic Route 66 once ran through the park. The Mother Road was decommissioned in 1985. It was superseded by I-55, I-44, and I-40, and over in California by portions of I-15, I-210, and I-10. I like to think it took six interstates to replace that one two-lane road from Chicago to Los Angeles, which was dreamed up in the 1920s by Tulsa’s Cyrus Avery. 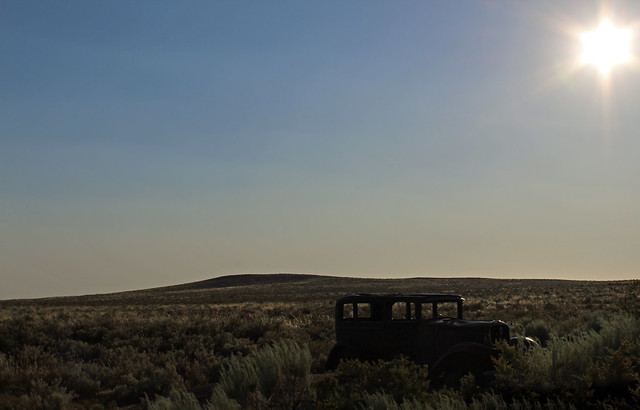 1932 Studebaker on the remains of The Mother Road

We made our way back onto I-40 to resume our eastward trek. Wendy captured a shot of one of the trains passing through the landscape as we drove onward across the state line into New Mexico. We stopped in Gallup for dinner at The Cracker Barrel and spent the night at the Best Western Plus Gallup Inn & Suites. The next day we would make our way to Santa Fe, stopping along the way to visit El Morro and a volcano with an ice cave.

I enjoy day hikes, photography, podcasts, reading, web design, and technology. My wife Wendy and I work in the Bartlesville Public Schools in northeast Oklahoma, but this blog is outside the scope of our employment.
View all posts by Granger Meador →
This entry was posted in art, photos, travel, video. Bookmark the permalink.