Time for a break

Mid-October’s Fall Break in Oklahoma doesn’t coincide with our autumn colors, which don’t peak until late October and November. But it is still well-timed for us school folks, as we are ready for a respite after completing a quarter of a new academic year. Supporting and troubleshooting new technology services and helping with core curricular assessments has kept me scrambling, while Wendy and her Student Technology Support Team have ramped up to help dozens of high school students each day with their various Chromebook issues.

On the home front, we had to shift most of our belongings earlier this month for new carpet to be installed. Meador Manor still featured its original 1981 salmon-colored saxony carpet. I didn’t have the money to replace it when I bought the house in 1994, and later put up with its traffic patterns, worn out pad, and even some torn seams to avoid the expense and disruption of replacing it. This fall’s hard-earned pay raise finally prompted me to take Wendy shopping for something better. We opted for a busy frieze carpet that disguises dirt and feels luxurious. Sooner Carpet installed Dreamweaver Stratosphere Leather carpet with new padding, and we are delighted.

Out with the old

In with the new

Now that we finally have carpet worth saving, we have invested in protective mats for our rolling chairs, put down a tarpaulin and moving blanket to protect it in Wendy’s painting area, and moved our shoe rack to encourage us to change them when entering and thus avoid traipsing in dirt.

The consequent shifting of items and furnishings led us to purge some things we no longer used. I still read a book or two each month, but mostly using the Kindle app on my iPad or my Kindle Voyage. So after selling off 200 books in 2010 and donating over 700 to the public library in 2016, I boxed up even more of my books for donation. I’m now down to about 200 books on my shelves, having shed about 85% of my original collection.

Other home improvements this month include a new headboard, lamps, and nightstand for the guest room and installing an exhaust fan in the office window for Wendy to use when she is applying resin to protect her paintings.

With work and home improvements dominating our days of late, we planned our break to emphasize our hobbies.

I took off Thursday in more ways than one since I took a vacation day and headed out to Wichita, Kansas while Wendy relaxed and painted at home. I was drawn there to the Botanica community gardens, which were started in 1987 by the Wichita Area Garden Council and the City of Wichita. They have grown to almost 18 acres and feature a butterfly garden, so migrating Monarchs were feasting there as part of their annual migration to central Mexico. 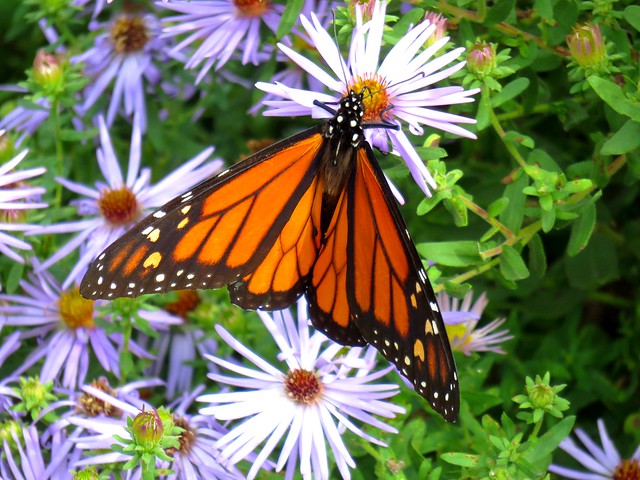 I got various shots of them feeding on asters and resting amongst the mums. 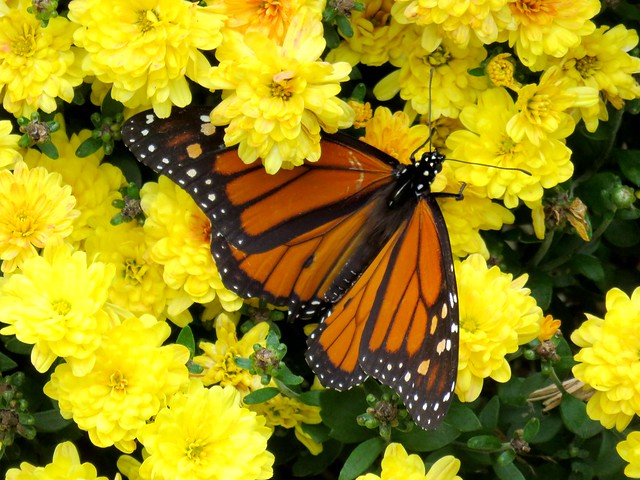 Monarch in the mums

I enjoyed seeing a cute little ladybug and of course took some shots of roses for Wendy, including a bud and bloom of Fired Up. 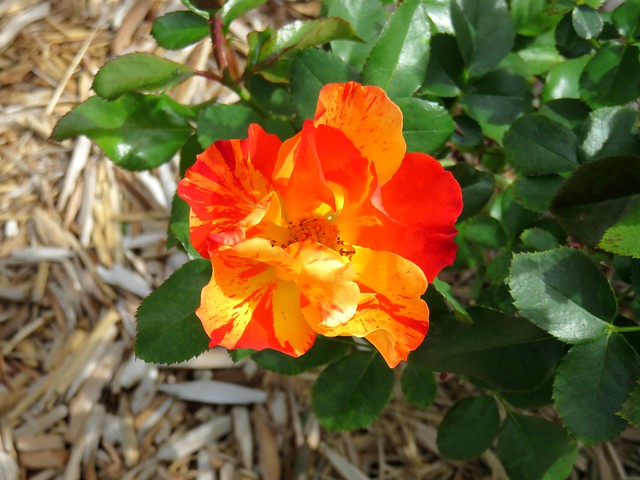 Wendy loves painting at home, but also was ready to get away. I knew she would enjoy hunting in the Ozarks for rocks with crystals, so we headed there for a short getaway.

It rained steadily throughout the drive eastward, so we stopped to see the exhibit Art for a New Understanding: Native Voices, 1950s to Now at Crystal Bridges in Bentonville. We both liked the vivid colors of The Storyteller: The Artist and His Grandfather by Norval Morrisseau, in which a Mayan influence was evident. His grandfather, the figure on the left, was a member of the Mideiwiwin Society who taught Norval traditional Anishinaabe religious doctrines and practices. 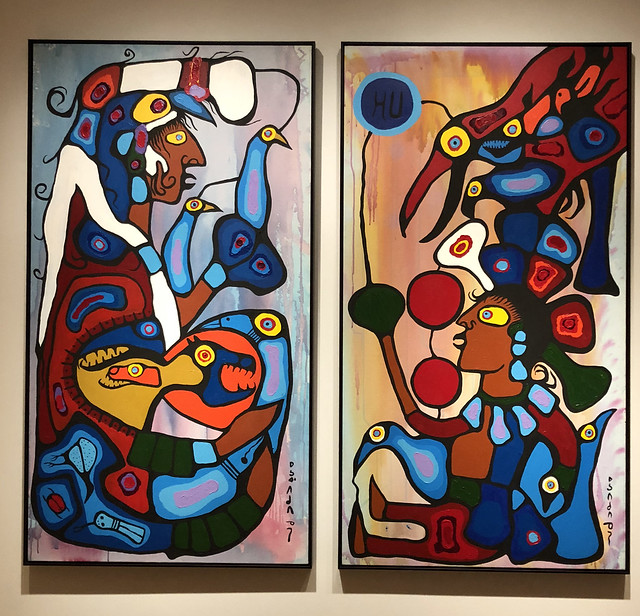 The Storyteller: The Artist and His Grandfather by Norval Morrisseau

The break wasn’t long enough nor had I planned ahead sufficiently to book a cabin at our preferred resort of Sugar Ridge at Beaver Lake. So I booked us for one night at a nearby hotel. The view was the best thing about that place, enough said.

But at least it put us close to Eureka Springs’ Lake Leatherwood, where we could hike to a stream and Wendy could hunt for rocks while I took some shots by the dam.

The weather cooperated by turning bright and sunny on Saturday. After a nice breakfast at the Sweet-n-Savory Cafe, we drove over to Lake Leatherwood and hiked up the Beacham Trail. While Wendy hunted rocks, I ventured over to the dam and down to its base.  I got shots of the flowing water and sunlight streaming through leaves which had begun to show traces of fall color. 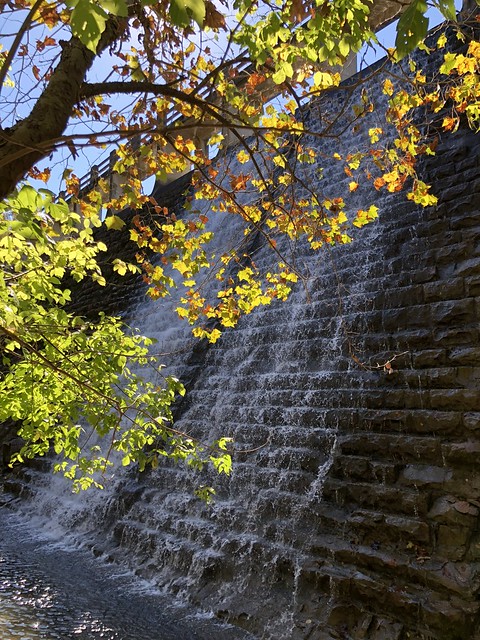 The recent rain meant West Leatherwood Creek was flowing well. Folks were out on the water in paddleboats and canoes, and I always enjoy the powerful perspective found at either end of the linear dam. 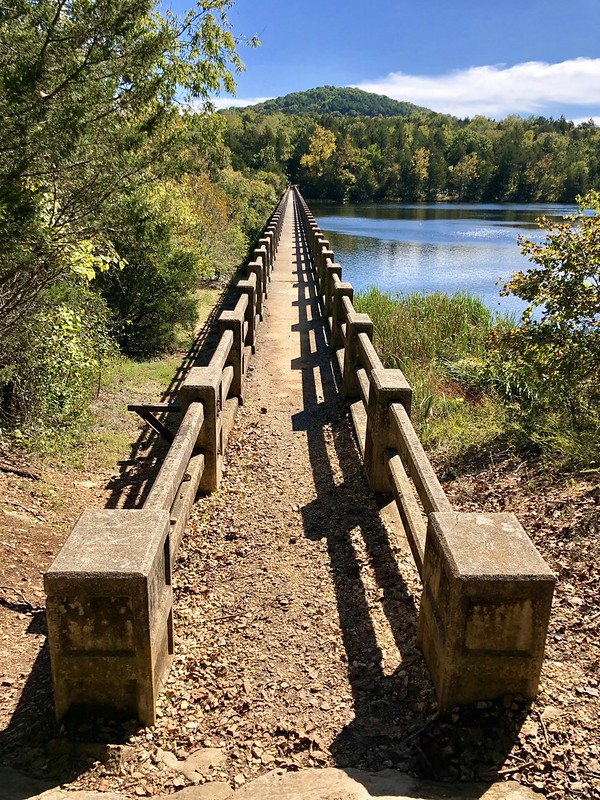 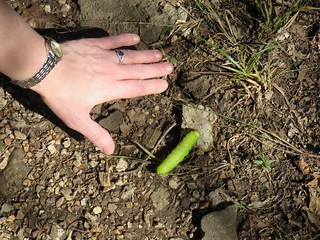 Bugs were minimal this time of year, and butterflies were enjoying wild asters. As we were making our way back to the car along the Fuller and Fishing Trails, a large caterpillar inched across our path. Someday it will become a Luna moth.

It was great to be back on the trails after months of avoiding them in prolonged summer heat. We needed the break and now can make it through the next four weeks of work until we get a week away for Thanksgiving.

I enjoy day hikes, photography, podcasts, reading, web design, and technology. My wife Wendy and I work in the Bartlesville Public Schools in northeast Oklahoma, but this blog is outside the scope of our employment.
View all posts by Granger Meador →
This entry was posted in art, day hike, photos, roses, travel. Bookmark the permalink.