I set aside wrapping up my posts about our June vacation for a few months because I was immersed in multiple technology deployments for the district. There is still much to do, but I finally found time to do another post!

While making reservations for the trip back in February, a friend of mine from high school and college, Sam Falkner, invited us to visit him and his wife, Ardith. They live in Louisville, a suburb of Denver near Boulder. I had connected with them a number of times in various states across the country in the 1990s, but had last seen them and their children in Louisville way back in 2001. So it was fun to adjust our trip to allow us to reconnect and introduce them to Wendy. 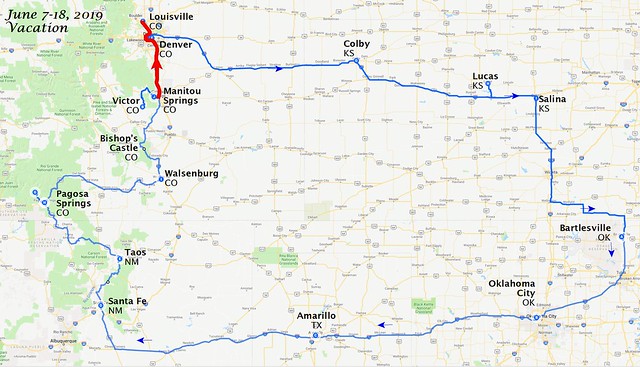 So Wendy and I made the drive up Interstate 25 from Manitou Springs to Denver. Wendy had never been there, and I was only familiar with the Tattered Cover bookstore and the sole remaining Casa Bonita restaurant in Lakewood. Since Wendy and I both enjoy art museums, TripAdvisor led us to the Kirkland Museum of Fine & Decorative Art in Denver’s Golden Triangle district.

Denver was a crowded and busy place after our long country drives, and the Denver PrideFest in nearby Civic Center Park meant there were some literally colorful characters out and about. The museum dates back to 2003 but moved into a new home in 2018.

Back in January 1929, Vance Kirkland became the Founding Director of the current School of Art at the University of Denver. He resigned in 1932 when the university refused to grant credit for art courses toward graduation. He ran the Kirkland School of Art until 1946, with classes accredited by the University of Colorado, when he returned as Director of the Art School at the University of Denver, retiring in 1969. Kirkland had leased and later purchased a brick Arts & Crafts building which became his studio. It was part of the original Kirkland Museum and was moved in 2016 so it could be incorporated into the new facility as well.

The museum is quite nice, with an international decorative arts collection of pieces from 1875 to 1990, ranging from Arts & Crafts up to postmodern. There is also a Colorado/regional collection, and a rotating Kirkland retrospective.

Wendy noted an Emerald Deldare Ware Vase from 1911 and Despondency Vase by Artus van Briggle from 1915, and I thought she might like a 1902 cake platter by Christian Neureuther which featured enameled roses. Some 1912 glassware by Wiener Werkstätte and a 1902 tea set by Kolomon Moser and Jutta Sika seemed far more modern to my untrained eye, while a huge and impressive Sparton Nocturne Radio from 1935 screamed Art Deco. 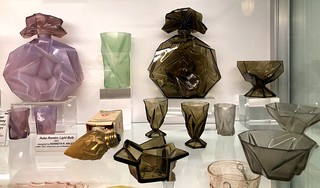 I loved the Ruba Rombic Glassware by Reuben Haley from 1927-1932, finding both their shapes and colors fascinating. I wondered what the Ruba Rombic light bulb designed by Reuben’s son Kenneth looked like when illuminated, and was happy to find out via the internet.

A lightning stem martini glass by Libbey Glass made me smile, and a 6-panel screen from 1925 or so by Jean Dunand had clear Art Deco imagery along the top. Wendy noticed some Bizarre Ware from the 1930s by Clarice Cliff, which lived up to its billing. A jazz cocktail tray was more in keeping with the era, with the museum’s green specimen a rarity since most of them were red. It was fun to see houseware eras illustrated by the museum’s specimens. 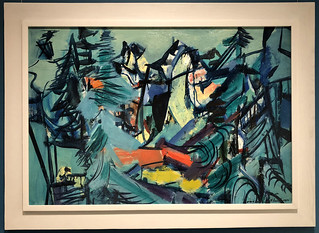 In addition to a woodcut self-portrait by Werner Drewes, there were many nice paintings and other works by Colorado artists. Wendy was attracted to Union Station by Don Allen and Sunlit Summit by Eve Drewelowe. Night Dreams by Margaret Mullin was clearly influenced by Dali.

We both liked the bold colors and slashing style of Vaclav Vytlacil’s Pines, while Werner Drewes’  Colorado Sunset was also bold, but too sketchy for my taste. I didn’t share Wendy’s interest in the abstract Untitled (Painting Class) by Charles Bunnell. Untitled (Western Sunset) by Frances Frakes Hansen was a bit plain for me, as was the more recent Number Forty by Cassandra Lillard. A more recent work I liked better was The Passage of Time by Sushe Felix. 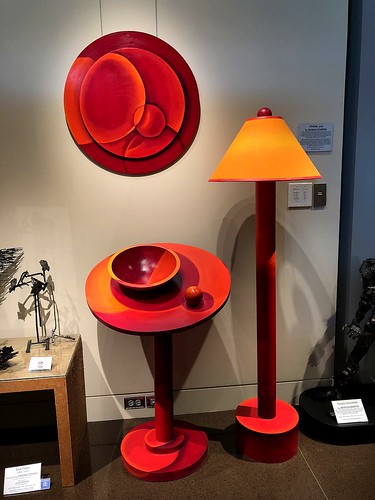 The large Circular Composition #118 (Change in Scale #102) by Dave Yust was part of a triptych in a bank in Greeley and certainly in keeping with much public art of that era, which have not aged well for me. Circles by Susan Cooper was a whimsical and colorful trompe l’oeil with painted boards evoking a floor lamp with a seemingly three-dimensional lampshade, a table with a bowl and ball, etc.

Wendy likes mobiles, so she enjoyed Anemotive Tower by Bob Mangold, along with his static but interesting sculpture Tetrahedralhypersphere. The latter evoked memories of weird mathematical manifolds and similar forms I used to see in Scientific American in my college days. Tangentially, I’ve had a weakness for blue-and-white lithographs since I read an old edition of Relativity for the Million by Martin Gardner which was illustrated by Anthony Ravielli. So I liked Herbert Bayer’s Seven Convolutions series, in particular Wasserfall, which I see is also in the Smithsonian. 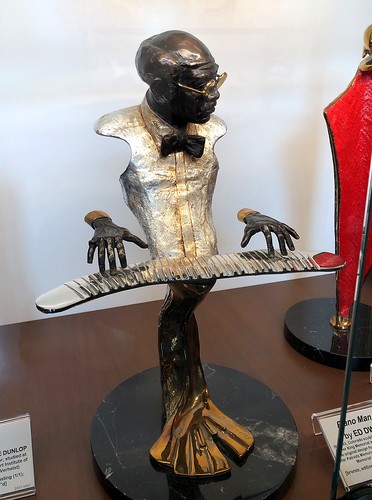 Wendy noted the ceramic Cactus by Martha Daniels, which needed more than one shot to illustrate, and Jeff Wenzel’s Vessel with Fish. She also liked Bottled Birds by Donna Marecak. I liked the evocative Piano Man by Ed Dwight, with its disembodied hands.

I thought the Aspen Series Ceramics vase by Jim Doty and Olga Wolosyn was fine, but didn’t care for the mug, which appeared to have something noxious spilling over its brim.

There was an exhibit of works by University of Denver instructor Barbara Locketz, including her Moonrise collage, a fun Life with Barbara Bowl, the abstract work Brother Jake, and a beautiful dress inspired by the colorful dresses she saw in Mexico, although she consciously avoided using Mexican forms or content in her work. 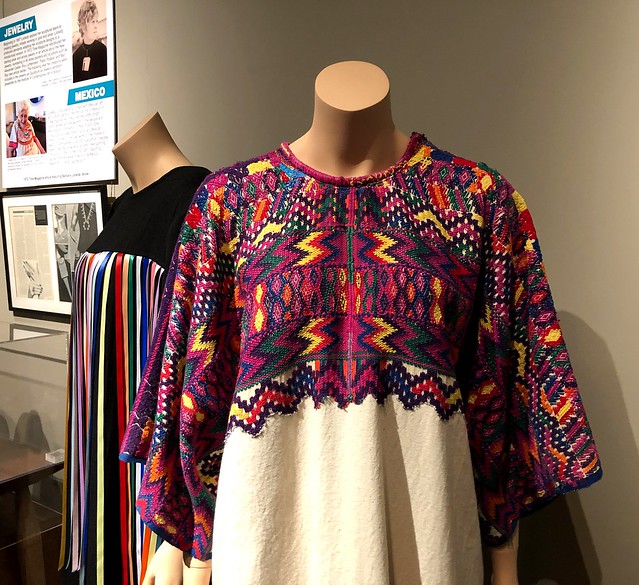 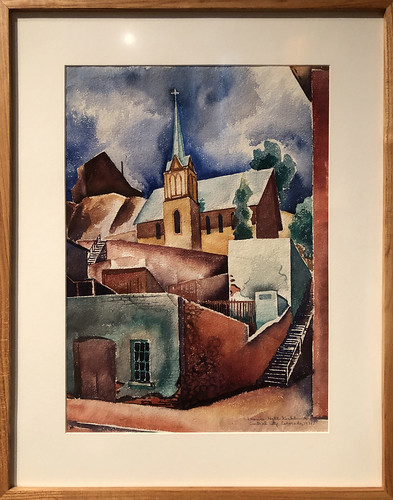 From his Designed Realism period, we liked his 1921 Central City, Colorado and 1930 Ronda, Spain painting of a monastery as well as his 1931 Mountain Ruins. All of those were made with his own secret mixture of watercolor paint with denatured alcohol. His 1935 Colorado Moonlight and 1946 Self-Portrait were similarly styled, but painted with oils, and the latter was made with a mirror since the background is a reverse image of his own Foggy Landscape of 1943.

We didn’t capture any works from his middle periods. Surrealist works often bore me, as they often seem to draw upon similar ideas of melting forms and objects out of scale amidst plain planes. But I liked several of his dot paintings. He created those by painting a background in oil and then, suspended in a sling over his larger works, applied large dots of paint with a wooden dowel, leaving high bumps of contrasting color. 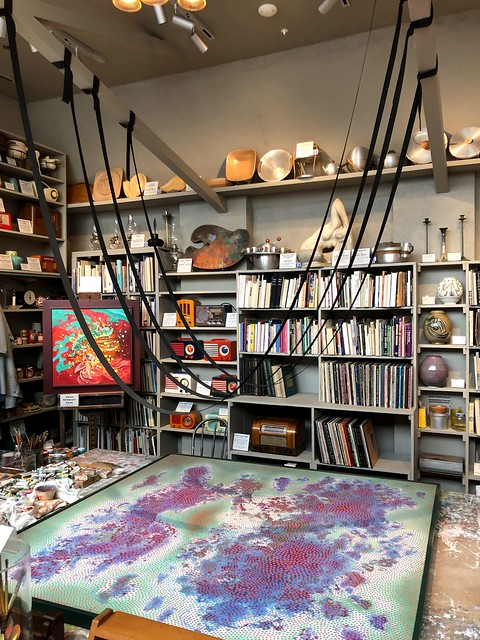 He liked to relate some of his late works to astronomy, such as 1980’s Explosions of Energy on a Sun 25 Billion Light Years from Earth and The Energy of Explosions Twenty-Four Billion Years BC in 1978, and Forces of Energy in the Open Star Cluster K 1, which he painted in his last year on Earth. A lovely ribbon dress by Nadezhda Bogdanova was inspired by one of his dot paintings. 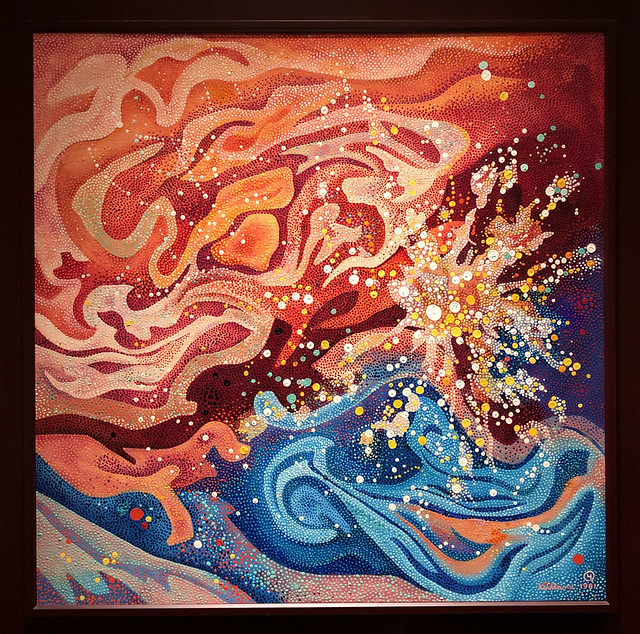 But the real stunner from his dot paintings was 1975’s The Illusion of Floating Mysteries in Red Space. My still photograph did not capture the effect he achieved, where the darker objects appear to float in front of the red background. It was somewhat disturbing to perceive the illusion a distance from this large painting and then approach to see it dissolve into obvious blobs of oil paint. 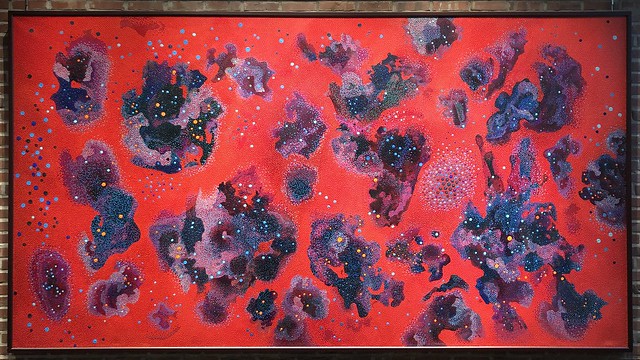 The Illusion of Floating Mysteries in Red Space by Vance Kirkland 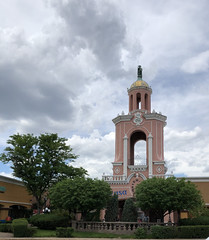 Having grown up in Oklahoma City with Casa Bonita as a fun treat, I had been looking forward to returning to the sole remaining Casa Bonita restaurant. It features cliff divers, and I had not been there in decades. But the return was ignominious. We had a ludicrously long wait in line to order, worsened by inconsiderate families who waited until reaching the cashier at the very end of the long wait to debate at length what to order. From there we proceeded into a crowded and noisy venue, sat near the cliff diving show with deafening narration from a sound system turned up way too high. The food, except for the sopapillas, was as mediocre as ever, and Wendy was absolutely miserable. We quickly bailed.

Thankfully our next stop was with the Falkners in Louisville, which a friendly host at the Kirkland Museum had politely indicated was pronounced like Lewisville, not Lueyville or Lou-a-ville. It was great to see Sam and Ardith again and find them doing so well. Our gracious and friendly hosts led us to The Huckleberry downtown where we enjoyed dinner with them and their son, Grant, who attends the prestigious Colorado School of Mines. Their daughter Julia had already flown the nest for New York.  In 2014 she was named a National Student Poet and was part of a White House poetry reading with First Lady Michelle Obama. She graduated from Smith and now works for Penguin Books. Both Sam and Ardith are smart cookies who have raised some very bright kids!

That evening, after Wendy and Ardith had gone to bed, Sam and I stayed up to watch Room 237, a documentary about crackpot theories on symbolism in Kubrick’s The Shining film. Sam had introduced me to Kubrick films back in our college days, and we had fun guffawing at the crazier ideas. Purely by coincidence, I had recently seen several of Rob Ager’s videos analyzing different Kubrick films, including The Shining. I agree with some of Ager’s points, while others struck me as tenditious and highly improbable. I was not surprised to later learn he was approached about being part of Room 237 and had wisely refused. I was happy to later find out that Rob actually enjoyed the documentary.

The next morning the Falkners cooked breakfast for us before we had to head back home. Wendy was impressed with how fast Ardith’s convection oven cooked some muffins, prompting her to later try out for the first time the convection feature on our ancient JennAir oven at home. And Wendy also loved the crushed ice dispensed from the door of the Falkners’ refrigerator, which would prompt us to update our kitchen to a side-by-side refrigerator-freezer with in-the-door ice and water. We had to special order a narrow unit to fit the slot in our galley kitchen, which delayed its delivery by over a month. During the wait, I noticed on Amazon’s Prime Day there was a sale on an Opal Countertop Nugget Ice Maker. Wendy loves the little ice pellets it produces.

The traffic in Denver was pretty hectic as we began our journey home. We tried to stop at the botanical gardens on our way through, but the lousy traffic and packed parking sent us on down the interstate for our two-day trip home via Kansas. We had some bizarre stops picked out for our journey through the sunflower state, which will be covered in the next and final post about our trip.

I enjoy day hikes, photography, podcasts, reading, web design, and technology. My wife Wendy and I work in the Bartlesville Public Schools in northeast Oklahoma, but this blog is outside the scope of our employment.
View all posts by Granger Meador →
This entry was posted in art, history, movie, photos, travel. Bookmark the permalink.