A highlight of our vacation would be meeting up with folks on the Front Range of the Rockies. We first rendezvoused with Betty and John Henderson in Manitou Springs. They had been fishing with some of their family members for several days on Taylor Park Reservoir, a three-hour drive to the west. The focus of our time together would be a day trip to Victor for a rock and mineral show.

We stayed at the Magnuson Grand Pikes Peak, with a view of the mountain in the distance. I picked out the Crystal Park Cantina for our rendezvous dinner in Manitou Springs. John and Betty were far more familiar with the town than we, but had not ventured south into Crystal Park, which is a 2,000-acre gated community. The restaurant was the Mission Bell Inn under the Masias family from 1962 until it was purchased by Justin Armour and partners in 2011. He was a wide receiver for the Denver Broncos in 1999 when the team won Superbowl XXXIII and later became the Manitou High football coach. His mother, Anne, signed on to assist with the cooking after having run other eateries in the area.

Then we drove to downtown Manitou Springs and found a parking spot. It was across the street from the Cliff House Inn, where I had originally made reservations for us when planning the trip but later canceled in favor of the less pricey Magnuson Grand on down the highway from the historic district. 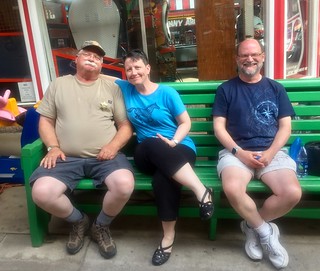 We enjoyed a stroll through the district, where I bought John a sheriff’s badge so he could keep us all in line. At a sign shop, I was picking out a suitable sign to give Betty for her classroom when I heard a commotion. Sharp-eyed John had spotted Susan and John Staats from Bartlesville across the street and called them over. We all got together for a group shot and realized the Hendersons had likely seen the Staats in the distance getting ready to go rafting earlier in the week, neither party able to recognize the other in the distance at the time. It’s a small world. 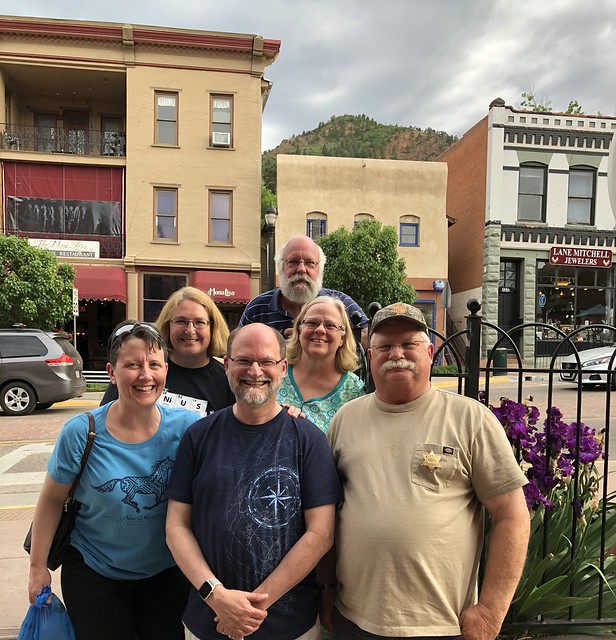 Unexpected rendezvous in Manitou Springs with the Staats

The next morning we had a meager breakfast at the hotel and then piled into the minivan for an hour-long drive on highways 24 and 67 around the north end of Pikes Peak up to the old mining town of Victor, which sits at the foot of Battle Mountain. John and Betty had been up on the mountain before, visiting Cripple Creek and Victor, the twin towns which straddle the enormous former Cresson Mine. 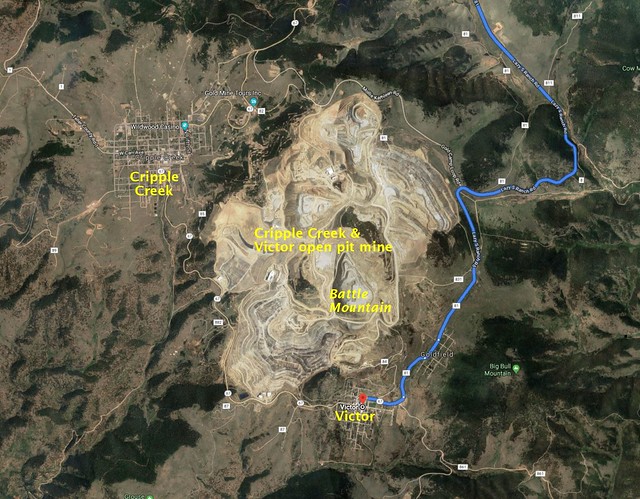 Cripple Creek and Victor straddle the open pit gold mine

In 1995 the historic gold mine was reworked as an open pit. Now a low-cost, low-yield operation, it produces less than one gram of gold per ton of ore. Yet it remains the largest producer of gold in Colorado with 211,000 troy ounces, or over 14,000 pounds, produced in 2014. My calculations say that would have required processing over 6.5 million tons of ore.

Bob Womack found gold on his cattle ranch on the small Cripple Creek stream in 1890, setting off a gold rush. Within a decade, the area population skyrocketed from less than two dozen people to over 50,000. Cripple Creek became the county seat and evolved into the home of the bankers and financiers for over 500 mines that operated in the area. Less than two miles away, Victor was platted in 1894 at the base of Battle Mountain, where the majority of the most productive mines were located, and served many of the miners.

The Victor and Cripple Creek mining district became the second largest gold mining area in the country, eventually producing about $10 billion of gold in 2010 dollars. Over 500 mines operated in the area. Headframes, which are erected above underground mine shafts for their hoists, still dot the hillsides around Victor and hint at hidden underground shafts. The Cresson Mine famously produced 60,000 ounces of gold in a few weeks in 1914 from a room-sized crystalline “vug” discovered 1,200 feet below the surface.

But gold production peaked in the early 20th century, and both towns waned. Cripple Creek’s population fell from over 10,000 in 1900 to about 400 by 1970. Its empty storefronts and picturesque homes led to it becoming a so-called “ghost town” destination in the 1970s and 1980s. Colorado legalized gambling in the town in 1991, reviving Cripple Creek as a gaming and tourist town which now has about 1,100 residents.

Victor had peaked at almost 5,000 residents in 1900 and fell to 258 by 1970. It has not embraced gambling and boomed like Cripple Creek, but does now sport about 400 residents, and it is easy to do a walking tour of its historic district.

What had drawn us to town was Wendy’s discovery there would be a rock and mineral show; both Wendy and Betty are rock hounds. We pulled into town before the booths along the street opened, so we stepped into the Fortune Club Hotel where John and Wendy enjoyed biscuits and gravy. The building was a saloon, gambling house, and brothel in the gold rush era. A sign on the street depicts some of the ladies of the evening with a sentence about each one. 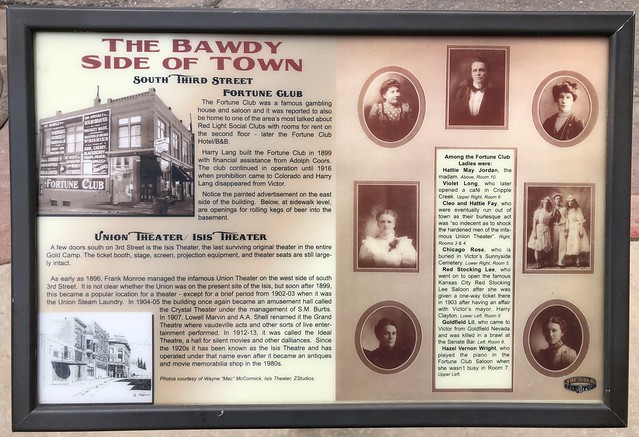 The bawdy side of town

The building’s construction was funded in 1899, by Adolph Coors of brewing fame, after one of the town’s major fires. After prohibition in 1916, it became a drug store, and the marble soda fountain still in the building was acquired from a store in Denver in 1937. When we later had lunch in the restaurant, the presence of the fountain led me to order a shake.

The show booths eventually opened, allowing Wendy and Betty to peruse the merchandise. John and I are used to entertaining ourselves while those two are obsessing about geology, and I strolled around downtown to explore the history on offer.

The town’s visitor center is in Alta Vista station, a tiny depot from an old narrow gauge railroad that once ran from Victor south to Florence, the prison town we had passed through a day earlier. That depot was moved from the old route, which is now Phantom Canyon Road. Outside the depot was one of the old streetcars that ran on lines which connected Victor and Cripple Creek to the mines and each other during the rush. 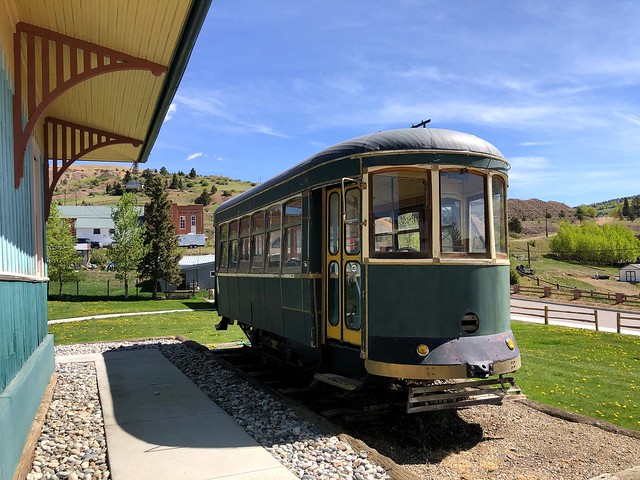 A block away from the Fortune Hotel is the Victor Hotel, which occupies the old First National Bank of Victor building, which housed a succession of banks and businesses and then went vacant. It is said that during the rush they stored bodies on its top floor between October and June, waiting for the ground to unfreeze to allow for burials. 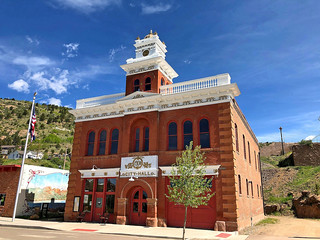 I walked to City Hall, encountering a great history mural. The old building underwent a restoration in 2004. Jack Dempsey once trained as a boxer in the city hall building, and his signature is on a wall in it. Before winning the heavyweight boxing title in 1919, Dempsey had worked as a miner in Gold Camp and boxed in Victor as “Kid Blackie”.

I enjoyed walking to the old Masonic Temple, which housed many fraternal organizations over the years. It is now vacant and neglected, although I would soon encounter a couple of artifacts from the Masonic Temple in a nearby museum. 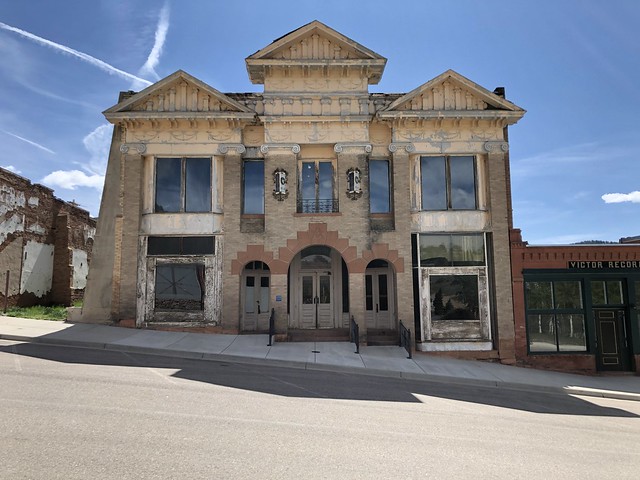 Adjoining the temple is the Victor Record newspaper building, which was where Lowell Thomas, the town’s most famous son, got his start as a newspaper boy and later editor. Thomas would become a writer, actor, broadcaster, and traveler, best remembered for publicizing T. E. Lawrence (Lawrence of Arabia). His career was before my time, but he was a world traveler who invented the movie travelogue and was a pioneer of electronic journalism. 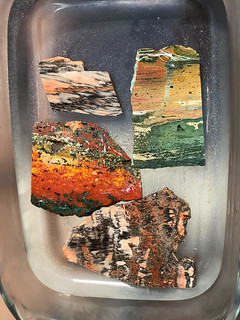 I made my way back to the rock show area, where John and I waited for the girls to finish their tours of the booths. Wendy purchased some opals, a few colorful stone slabs from Mozambique, petrified wood slabs, and a beautiful “champagne crystal”. Wendy enjoys adding glow-in-the-dark pigments to some of her paintings and other works, and she bought an egg-shaped stone that was treated so that it glows a bright green in the dark.

Wendy loves rose rocks and has purchased specimens from the Timberlake Rose Rock Museum in Noble, which is the area where most barite roses are found. She was amused to buy two more of them in Victor and tried to educate another customer who speculated they might be coprolites. Like me, she just can’t help being a teacher. 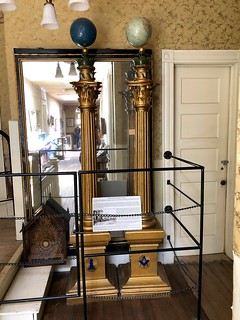 Pillars from the Masonic Temple

As we made our way over to the Fortune Club for lunch, it began to snow a bit, reminding us that we were at an elevation of 9,700 feet. Afterward, John and Betty led us across the street to the Victor Lowell Thomas Museum. The museum had memorabilia about the old broadcaster, but of greater interest to me were the Masonic pillars preserved from the town’s old temple.

One was topped with a moon globe, the other one of the Earth. There is some typically complicated mumbo-jumbo about the symbolism, but suffice it to say they are weird echoes of two pillars that decorated Solomon’s Temple in Jerusalem. Back in junior high a friend convinced me to be initiated into the DeMolay youth organization associated with the Masons. I survived an elaborate initiation at the huge Temple in Guthrie, but had no patience for all of the pseudo-religious and quasi-historical nonsense that surrounded their practices. So I only attended a couple of meetings before bailing out.

Behind the pillars was what was termed a “diamond dust” mirror, so-called because of the sparkles in its soft reflection. Online sources differ on what the terminology means, whether it is an effect of mercury evaporation or simply the breakdown of an old mirror’s silver nitrate coating, but I am skeptical any actual diamond dust was used in its manufacture.

One room had a collection of old dolls, one of which was winking at me in a rather creepy fashion. Wendy took shots of various apple head dolls on display. I speculated that the glass case might be to protect us from them rather than vice versa. 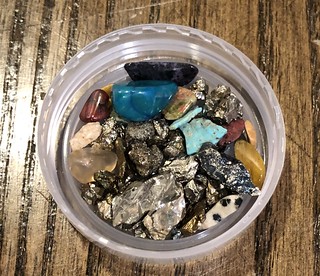 The museum had a trough set up outside so we could pan for gold and gems. Since the brief snow was already just a memory, we indulged. The Hendersons are quite experienced at panning, but I just swished and swirled my pan to extract as much pyrite as possible, since I found the tiny specks of real gold were too much to bother with. I gave Wendy my little treasures to join with hers.

Before we left town, Betty made a deal on a petrified wood specimen she would add to the items she and Wendy purchased a couple of summers back in Holbrook, Arizona. Then we went over to Cripple Creek to drive along its more prosperous streets before heading back to Manitou Springs. We had dinner at the Mason Jar and bid the Hendersons adieu, since they would be up early the next morning to head back home while we drove up to Denver and Louisville where we would visit with friends I hadn’t seen since 2001.

I enjoy day hikes, photography, podcasts, reading, web design, and technology. My wife Wendy and I work in the Bartlesville Public Schools in northeast Oklahoma, but this blog is outside the scope of our employment.
View all posts by Granger Meador →
This entry was posted in history, photos, travel. Bookmark the permalink.