Languages of the Dead 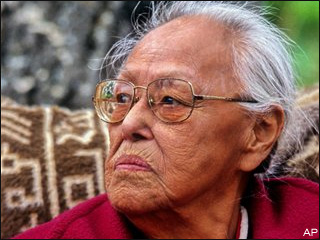 Last Thursday, outside the local Quiznos sandwich shop, radio tore my heart in two again. I was about to drive home with a belly full of French Dip goodness when I tuned in National Public Radio. Its brief elegy to Marie Smith Jones, the last fluent speaker of the Eyak language, arrested me with its beautiful reminder of human frailty.

Marie was, for the last 15 years of her life, the only person on Earth who still spoke Eyak. She worked tenaciously with Michael Krauss of the University of Alaska to preserve a remnant of her language – her culture – by compiling a dictionary and grammar of the dying tongue and publishing a book of Eyak stories.

The terrible lonely sound of Marie’s Eyak prayer fading away amidst the mournful Native American Theme of Brian Keane sent my thoughts flying. But they flew not to the Copper River, which is home to delicious salmon and which once held in its mouth the now-dead tongue of the Eyak. Instead I flew on waxen feathers to ancient Crete and the mystery of Linear A.

One of the great linguistic achievements of the 20th century was that of Michael Ventris, who deciphered the Linear B script of ancient Crete. But the earlier Linear A has not yet found its translator, and may never be brought back to life. Trapped in its clay depressions are clues about the times of legendary King Minos, whose labyrinth was designed by the inventive Daedalus. One of the latter’s calamitous creations allowed the white bull to cuckold Minos and produce the horrible Minotaur. Another bore Daedalus’s son Icarus up to the sun only to have his wings melt away and send him plummeting to the sea.

But the clay is cold and hard and silent – like Marie, it no longer tells us tales.

1 Response to Languages of the Dead