A Show 16 Years In The Making

Lynne and I with Gary Briggs back in 1995

Back in mid-1990s my physics teaching colleague Lynne Shaw and I wanted to take our students on a tour of an electrical power plant. But arranging a field trip proved impossible with our budget and time constraints. So we decided the two of us would take a tour, snapping photos and taking notes, and turn it into a slideshow for use in our classes.

It all worked like a charm, although it was a lot more work to create the show back in 1995 than it would be today. We waited a few months for the tour time set by the local utility, Public Service Company of Oklahoma. It turned out the plant manager, Gary Briggs, had timed our visit so we could see into one of the turbine-generator systems while it was dismantled for maintenance.

A peek into the turbine

Throughout the tour Lynne and I snapped photos with our respective 35mm film cameras and took extensive notes about what we learned from the very informative and welcoming Mr. Briggs. Back when I was an undergraduate majoring in Science Education, for a media class I’d created a little slideshow about the way electrical power is distributed in a city, showing substations, transformers, and meters. Lynne and I did the same thing on our return to Bartlesville.

We developed our film into slides and picked out about 30 of them. On my Gateway 2000 computer, which sported a 66 MHz 80486DX microprocessor (compared to the four-core 2.66 GHz i7-920 in my current desktop!), I created a tiny title slide and miniature schematic of the plant’s operating parts and printed those onto transparency film to insert into film frames to add to our slideshow. Lynne and I wrote out a narrative to go with the slides and took turns recording it onto my computer using the Windows Sound Recorder. I picked out a number of free MIDI music clips that came bundled with the computer’s SoundBlaster audio card and mixed the music in with our narration and many sound effects, then added little beeps to indicate when each slide should be advanced. I then recorded the completed soundtrack onto cassette tape.

Before PowerPoint there was the Carousel

We then had a 35 mm slideshow with audio narration we could show our classes each year. It had been a lot of work, but we had great fun doing it. We later gave a workshop on electricity at the Green Country Science Teachers Workshop and Phillips Petroleum paid to replicate the slides and cassette so we could distribute the show to the participants.

Eventually PowerPoint evolved to where it could replace the analog show. So I scanned our slides to convert them into bitmap images I could load into PowerPoint. I linked them to the original digital WAV audio files we had recorded, omitting the beeps from the mix this time, and added some animations and titles. I timed out each slide to advance automatically at the right moment, and had a fully automated PowerPoint.

Lynne retired in 2000, but the show carried on. Now I could burn it onto a CD as an automated PowerPoint, and I continued to distribute it at the Green Country Science Teachers Workshop until the workshop folded in 2002.

In 2008 I further refined the show with improved scans of the slides and updated graphics. I then tried to find a way to convert the revised PowerPoint into a video, because the show was automated and perfect for a video. Also, PowerPoint back then did a terrible job of properly linking to the separate audio files, making transferring the show to another machine always problematic if you didn’t use the CD. But I couldn’t find a way to make the conversion. I did create a silent version of the show with the narration text overlaid on each slide, and posted that online in both PowerPoint and Adobe PDF formats.

Today Lynne called because she was on a camping trip where she had met an electrical utility executive. She asked me to send her a link to the show. I sent her the links for the silent versions and wondered again if there was some way to convert the show into a video. 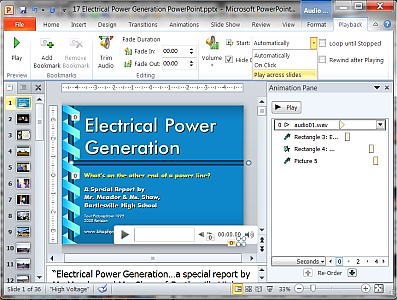 It turned out PowerPoint 2010 could do it, but it did not like the way the old WAV audio files were linked into the show. I had to convert the show into the latest PPTX file format, then delete each audio link and re-insert the audio clips so they would be embedded into the show itself, tweaking their playback settings each time. But once I’d done that I could then just click “Save As” in PowerPoint and select to output it as a Windows WMV video.

I then uploaded that to YouTube and now our little show, 16 years after we took the tour and spent so much time crafting it into a narrative, is online for the world to enjoy. You can even watch it in HD, complete with cheesy free music from the early 1990s. And yes, back then I had more hair on top of my head than on my chin.

I enjoy day hikes, photography, podcasts, reading, web design, and technology. My wife Wendy and I work in the Bartlesville Public Schools in northeast Oklahoma, but this blog is outside the scope of our employment.
View all posts by Granger Meador →
This entry was posted in physics, technology, video. Bookmark the permalink.