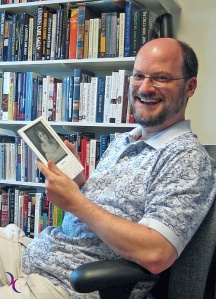 At home with one of my old Kindles

Regular readers know that I bought the first Kindle for $360 in June 2008, then in February 2009 I gave it away and bought a Kindle 2 for another $360, and in September 2010 I gave that away and bought a Kindle 3 for $139. I had to get the first defective Kindle 3 replaced, and the replacement kept crashing until I threw away Amazon’s case and replaced it with a nice soft BUILT case. Later I decorated my Kindle 3 with a nice sticker.

Since June 2008 I’ve purchased and read over 100 Kindle books and read a dozen or more additional public domain books I downloaded from the internet. So you can tell I have LOVED my Kindles. They changed my life sufficiently for me to confidently sell off over 100 printed books from my library when I was shedding old media to buy my first iPad. It was so nice reducing the shelves upon shelves of books in my home office that I culled my print collection even more, donating to the high school and public libraries several hundred more books I didn’t plan to reread and which I could not sell online. A number of those books behind me in the photo are now gone. But a newer version of that Kindle is still with me.

This week Amazon announced several new Kindles. All drop the little hardware keyboard and come in ad-supported versions or, for $40 extra, versions which lose the ads. The ads are reportedly not very annoying: the sleep screen shows ads instead of woodcut images of authors and there is a banner ad on the home screen where you scroll through your list of books, but no ads are shown when you are reading a book. If Amazon sticks to that policy, my next Kindle will be cheaper and ad-supported.

I love a size comparison tool put up by blogkindle.com which lets you CTRL-click on different versions of the Kindle to overlay them on each other and similar readers and tablets to get a feel for their size and screen real estate. Here’s the size comparison between my iPad 2 and Kindle 3. 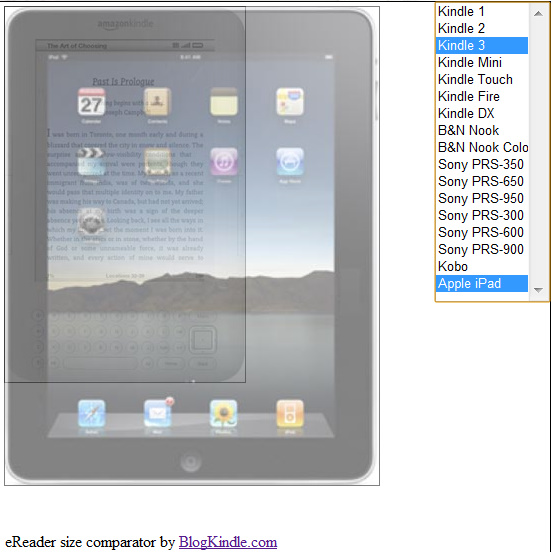 Overlaying a Kindle 3 on an iPad 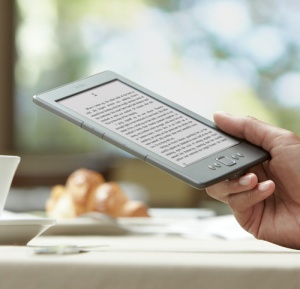 There’s a new tiny and cheap $79 Kindle which has the great e-Ink screen with the typical forward and back page buttons and controls at the bottom to navigate an on-screen keyboard. You certainly won’t type much on that, so I reckon users might tend to search for and buy books on their computer and have them downloaded to that Kindle rather than painfully select letters to type in searches, and they won’t take many notes or browse the web much with that version. This new Kindle is available now.

There’s a Kindle Touch which also has the superb e-Ink display but with a touchscreen function to navigate, type, etc. If I wanted to replace my Kindle 3, which I have no reason to do, this would be my model of choice for my needs. Nothing beats e-Ink for long extended reading. You can buy a WiFi model for $99 or pay $149 for a 3G model with support for downloading books almost anywhere. (Remember, add $40 to any price if you want to ban the ads.) The Touch isn’t available until late November.

But the big news for many folks will be the $199 Kindle Fire, which is the same size as my Kindle 3 but is mostly a 16×9 ratio color LCD touchscreen. This WiFi-only tablet lets you read Kindle books, watch Amazon-distributed streaming music and videos, surf the web, and run applications purchased from the Amazon app store (counterparts to the apps you find on Android phones and cousins to the apps one purchases for iPhones or iPads). Amazon Prime members like me get a gaggle of free movies and TV shows they can watch on the Kindle Fire. The books you read on the Kindles stay synchronized to the same books you can be reading on a computer’s Kindle app/program, and the videos you watch on a Kindle Fire also stay synchronized to the same videos you can watch on your computer or a television or DVR with Amazon video support. A Kindle Fire comes with a free month of Prime membership (which is best known for its free two-day shipping on most Amazon orders, which is highly addictive) and then you can become an Amazon Prime member for the usual $79 per annum. If you buy lots of stuff from Amazon, the Prime membership is great. The Fire will be available in mid-November.

But I’m the proud owner of an iPad 2, which is more powerful, has a larger screen, syncs to my Apple TV for playback, syncs to my huge iTunes music library, and even has a camera which I never use. So I have no use for the Kindle Fire, and I’d never read a novel on my iPad nor the Kindle Fire because an illuminated LCD screen is too tiring on my eyes for long extended reading. I’ll always want e-Ink for novels. But if I were a person who could not afford the $500 starter price for an iPad 2, the smaller $200 Kindle Fire would certainly be worth a look despite its reduced feature set.

For now there is no reason for me to follow my past practice of replacing my current Kindle with the latest generation. The Kindle Touch’s screen does not appear to be noticeably better than that of my Kindle 3, and I don’t mind pressing buttons for now. But sometime in 2012 I expect an updated Kindle Touch will be released. If it offers some compelling new features I’ll probably make the leap. I think Amazon is right on track with their development cycle and look forward to seeing more Kindles out in the wild.

2 Responses to The New Kindles