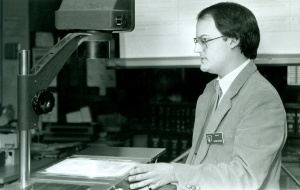 Old school – how I made presentations back in 1993

As I approach a quarter century of teaching, I’m making yet another shift in how I present videos in class, and that led me to ponder the ways classroom technology has changed since I began teaching physics at Bartlesville High School in 1989.

Back then the only videos were on VHS tape and shown on a television wheeled into the room on a cart, and if I wanted to display a pre-made visual, I used an overhead projector like the monster shown at right (the projector, not me!).

The only computer in the high school science department was an Apple IIc, reserved for the science building rep. Some students had scientific calculators, but Texas Instruments had not yet produced a graphing calculator. My students had to graph their data by hand with hand-drawn best fit lines, all record-keeping was on paper, and attendance was on paper slips clipped to the door each period. As for lab equipment, the school had just bought a few air tracks, but not enough to outfit six or seven lab groups. So we were still using springs on metersticks to pull old wooden dynamics carts across the floor for several of our labs.

I’ve been known as the computer whiz at work for decades, but I’m actually rather conservative in my use of technology. I still keep a paper gradebook, since it never goes offline and is easier than the computer for tracking accumulated tardies and absences, although of course I transfer the grades into the online system. I prefer a dumb whiteboard to an electronic one and rarely use PowerPoint, I’d rather have students make hand gestures for feedback than use remote ‘clickers’, and so forth. But my classroom technology has certainly evolved since my early Cro Magnon days.

Science teachers and the donated computers and printers back in 1995

I’ve had graphing calculators for years, but have never used their graphing functions outside of training classes since I found them too cramped and limited. Instead, as the years went by I worked to build up a collection of used computers for student lab groups to use with Vernier’s Graphical Analysis software. By 1995 I was trying to interest other science teachers in this approach, with me arranging for Phillips Petroleum to donate a bunch of old IBM AT machines and dot matrix printers for the science rooms in grades 6-12.

Eventually each station in my lab had an old IBM PS/2 Model 25 floppy-disk-based computer for graphing, with a primitive print-only network of telephone cables linking them to a few slow and noisy old dot matrix printers with fanfold paper.

My classroom evolved to having old hard-drive computers at the stations, linked in a daisy chain 10BASE2 network of thin coax cable which I wired up from one station to the next, all linked to a single laser printer. What a breakthrough that was, since I could finally transfer files and everyone could print to a single fast printer with high-quality output. A few years later I led NetDay at our school, with volunteers helping me install the first Ethernet wiring and wall ports in the science labs.

By then the use of classroom computers was not all that different from what we do today – we’re still using a version of Graphical Analysis after all these years – although fat CRT monitors have been replaced with flat LCD panels and the desktop machines are smaller and more capable with each generation. We also now have enough laptop computers that I can provide each student, not merely each group, with a computer if needed for in-class data collection and lab report creation via wireless networking, but it is still such a big hassle to get enough computers wired up and running properly that I only do it once per year to give them the experience. I presume eventually we’ll have convenient tablet computers for this sort of thing, but we’re a long ways from getting there with our pitiful state funding for public schools.

Well, I still have an overhead projector and I actually use it in class, although only for a few demonstrations, such as Fleming’s Law and electromagnetic induction, where an apparatus on the overhead can project a huge visual. Until we built the science wing in 2003, I either used a large CRT monitor to show visuals or a portable LCD projector on a cart. Here’s what my classroom technology looked like in 2001, minus the portable LCD projector and a SMART Board I never used much:

My classroom technology in 2001

Thankfully the lab stations in the new wing are MUCH larger

You can see why we needed the new wing, with its large student lab stations with built-in network ports, ceiling-mounted LCD projector, etc.

With the permanent LCD projector at my disposal, I shifted even more to computer presentations for visuals and now have an Elmo document camera for some demos and papers. But I use PowerPoint sparingly, relying much more on the chalkboard (now a whiteboard) since it gives me plenty of space to write and leave things visible for the slower students. Writing everything out each period also helps me pace myself more to the speed students need and encourages me to be succinct. I use PowerPoint only when there are many visuals and/or video clips to integrate into the lesson, not for regular note-taking.

1991 vs. 2012: whiteboards instead of chalkboards, but not much difference

Promethean Board (no, that’s not me; I don’t like them)

I wrote grants for a SMART Board over a decade ago and later a Promethean Board, but neither electronic white board worked for me since the long solutions to some examples took up more than one screen and I wanted the earlier work to remain visible, something I can readily do with my multiple traditional white boards. So I gave both electronic boards away for others to use.

I’m sure there are clever interactive things I could have students do on a Promethean Board, but it just doesn’t suit my style of instruction. Similarly, although some teachers make effective use of them, I don’t want a “clicker system” of student remotes for feedback, instead relying on observation, questioning, and simple student hand signals. But if we ever equip every student with a tablet computer, that might prompt me to change.

Video Clips – VHS to DVD to the computer 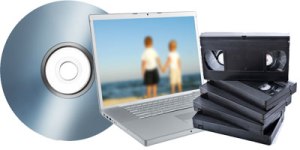 And after all that discursion, we get to what prompted me to think back on classroom technology: classroom video clips. In the old days I had to pop in a VHS tape to show a clip and then painfully rewind it. Later I could burn clips onto a DVD for use in class with the ceiling LCD projector and that also allowed me to extend the life of good clips beyond their pitiful VHS origins. I have been fighting the DVD player again this year, waiting for it to boot up and wrestling with it to show a clip I’ve burned off, or show a bit from a larger video.

But showing a clip from the computer is far more efficient than wrestling with the stupid DVD player. What held me back until this year was that the old laptop computer on my teacher desk simply didn’t have enough storage space for all of my video clips and I’ve learned not to rely on the school’s network for instructional components – I can’t stand for the internet or the network to go down and leave me high and dry.

But this year I planted a new desktop computer under the desk, angled a not-too-large LCD monitor on it, and thus gained plenty of disk space and processing power to switch to only using computer-based video clips. I’ll keep the DVD player handy for full-length videos when I miss school, since most substitute teachers can’t handle lab work and simply copying physics notes isn’t very helpful. If I can let students work on an existing assignment I always do that, but sometimes a video related to the objectives is the best substitute.

The problem is that the dozens of short clips I’ve collected were mostly burned to DVDs (with backup discs at home) and not retained on a hard drive. So I’ve been slowly ripping them back off my own DVDs, editing them if needed, and throwing them into my DropBox directory. That way they sync up to the cloud as well as onto any computer I designate, giving me several backups and making it easy to get them onto the computer at school.

I’ve been using HandBrake to rip the video clips off my DVDs on my desktop Windows 7 machine. The default Windows Media Player I use at school won’t reliably play the ripped clips, so if I want to play them with the DivX player, I have HandBrake rip them in MKV format.

But if I want to edit them, I can’t use the free Microsoft Movie Maker to edit the clips HandBrake produces. Instead, I rip them off in MP4 format, copy that over to my MacBook Air and convert the file into a form iMovie can edit with MPEG StreamClip, edit the file in iMovie, and then export it back out.

Frankly, it has been tedious, but now that the job is done I should have all of my video clips at my fingertips in class. No more mucking about with the DVD player, thank goodness. Welcome to the 21st century, Mr. Meador!