A dear friend now living in Tulsa, Carrie Fleharty, asked for a day trip out of town with me to cool her cabin fever over Winter Break. She didn’t care if we went hiking or what, just so long as we were well out of town for the day. The weather called for a chance of freezing rain all morning, but I drove from Bartlesville to Tulsa to pick her up and we then drove a few hours east to Bentonville, Arkansas. The inhospitable weather meant no hiking, but I had an alternate plan ready.

We had a delicious lunch at Tavola Trattoria, which TripAdvisor ranked as the #2 restaurant in Bentonville. (#1 was a sushi place, and I refuse to eat raw fish.) Carrie and I both ordered the Four Cheese Ravioli with Bolognese Sauce, and we quickly cleaned our plates of the delicious food. We then walked around the town square and looked through the WalMart Visitor Center. Then we headed to the real destination for the day: the Crystal Bridges Museum of American Art.

I’d visited there a couple of times before, last April to hike the trails and in June to tour the galleries. We hopped out under cold gray skies, neither of us carrying our better cameras, just cell phones with cameras, to stay light on this “fun day out”.

The museum was new to Carrie, but we didn’t tarry long in most of the galleries. We did take a long pause in the North Gallery to enjoy both of the panoramic views from its sweeping window walls. To the south across the pond was the Eleven Cafe, in a building designed like the North Gallery. To the north was a view of the grounds, including the ho-hum Lowell’s Ocean sculpture and the beds where last June a hungry groundhog was so entertaining.

On my previous visit I focused more on the sculptures than the paintings. But this time Carrie and I had the most fun in the final galleries of modern and contemporary art. While there were the expected works of abstract expressionism and color field, which hold little interest for either of us, there were several pieces both Carrie and I found intriguing and fun.

Stanton MacDonald-Wright‘s Au Café (Synchromy) from 1918 was a pleasure to decipher. It might at first seem abstract, but a woman’s right shoulder and arm were immediately apparent to me. Then I could make out her other arm, holding a gliss. That allowed me to see her prismatic face. More subtle, and requiring Carrie’s help for me to see better, were the color wedges below her which form a seated man with his back to the viewer, holding a glass in his left hand. Look for his ear, eyes, nose, and beard just below the middle of the painting; his glass is in the bottom left corner of the oil.

I have often found cubism off-putting, but this colorful example, in which the artist associated colors with musical scales in what he termed Synchromism, was quite nice. I would like a print of it, since the original is valued at about half a million dollars! 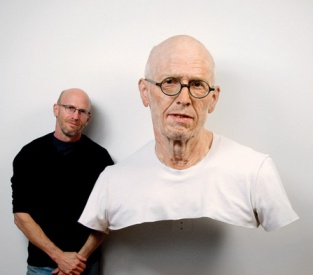 A work which captured many patrons’ interest was Old Self: Portrait of the Artist as He Will (Not) Be, Variation #2 by Evan Penny in 2010. This larger-than-life bust made of silicone, pigment, hair, fabric, and aluminum, is incredibly lifelike. You can go right up to it and view the ear and chest hairs, wrinkled skin, etc. and it looks just like a real, although gigantic, person. I had fun capturing shots of elderly men gazing at and posing by this piece. Later I found out what Evan Penny looks like, posing with his later self. I’d love to see more of his incredibly realistic, albeit sometimes deliberately distorted, works.

Me and my future self?

This comparison of now and a possible future reminded me of using an online photo aging app to transform myself. However, I think Evan Penny could do a far more accurate prediction.

Grant Wood in Spools of Thread

A piece which particularly impressed Carrie and me was After Grant Wood (American Gothic) 2 by Devorah Sperber in 2006. A square yard of wall had different colored spools of thread lined up on chains, with a viewing ball on a rod in front of it.

We were careful not to read the placard, first studying the spools of thread. I knew the image we would see in the crystal sphere would be like that of an object placed beyond the center of curvature of a concave mirror: a reduced, inverted, real image forming somewhere between the focal point and twice that far out from the sphere. So I knew the bottom spools must represent sky, and it was quite fun to see an image of Grant Wood’s famous painting through the tiny sphere. The photograph I took illustrates how our mind, familiar with the base image, fills in details not actually present in the spooled thread.

Carrie also had fun locating the type of jack-in-the-box she owned from childhood which formed part of Nick Cave’s 2010 work Soundsuit, with a mannequin covered in a knitted and crocheted fabric covering bursting forth with toys. It would be fun to see him in a live performance.

I always enjoy photorealistic paintings, and there were two stunners at Crystal Bridges. First was Jamie Wyeth‘s 1990 painting Orca Bates, part of a series of paintings he did to chronicle the Orca’s journey from childhood into adolescence. In this work Orca’s wet, glistening, and vulnerable body is seated on an old sea chest with a massive whale jawbone in the background. Orca’s elongating but still lithe and hairless body, and his boyish torso, speak to how puberty is just beginning, while Wyeth has portrayed him with massive feet, an artistic foretelling of the larger man he will soon become.

A painting which stopped me in my tracks, and then had me pacing back and forth, tilting my head in wonderment, was Antarctica by Richard Estes in 2007. I’ve seen his precise paintings of New York City building and streetscapes before, but was unaware he had branched into natural subjects. The view he gives of the ice-laden land from the deck of a cruise vessel is like a portal into another reality. I noticed from adjacent works that Estes excels when dealing with specular, versus diffuse, reflections. So an icecap is a perfect subject for his art.

Carrie and I retired to the museum cafe to enjoy a delicious chocolate cupcake with mocha icing. Snow was falling, blanketing the surrounding hillsides and rooftops. It was so peaceful and beautiful, a true escape.

We then made our way to the temporary exhibits, with models of other designs by Crystal Bridges’ architect, Moshe Safdie. We also viewed GE’s See the Light, but we were both very disappointed in it. The few pieces seemed decades out of date and quite unimpressive. I liked Karen LaMonte‘s 2007 glass sculpture Dress Impression with Wrinkled Cowl, displayed in the corridor outside of the See the Light exhibit, far more than anything GE brought to light.

The snow continued as we made our way outside to pose by one of Robert Indiana‘s Love sculptures, first Carrie, and then me. We relaxed inside, enjoying the view, then ventured back to my car. We took the Orchard Trail through the snow, with Carrie enjoying her hooded coat. I had left my Tilley hat in the car, so I had to shield my noggin with a museum brochure.

We arrived at the parking lot and Carrie posed one last time by a snow-covered tree with my snow-covered car in the distant background. The trip back to Tulsa was beautiful with the snow and we finished our evening at TGI Friday’s and the requisite trip to the bookstore. I’m so glad Carrie asked to go on this escape; it was one of the highlights of Winter Break.

I enjoy day hikes, photography, podcasts, reading, web design, and technology. My wife Wendy and I work in the Bartlesville Public Schools in northeast Oklahoma, but this blog is outside the scope of our employment.
View all posts by Granger Meador →
This entry was posted in art, photos, physics, travel, video. Bookmark the permalink.

1 Response to Crystal Bridges Lead to a New Year