Next weekend Wendy and I hope to work in the yard and will be chaperoning at the prom, so this weekend we were determined to escape the area for a springtime walk. I figured the dogwood trees would be lovely on the trails at the Crystal Bridges Museum in Bentonville, Arkansas, where we could also view the William S. Paley collection of “modern art” which, given that the former head of CBS died in 1990 at the age of 89, meant mostly early 20th century works focused on French “Modernism”.

Our first stop was in downtown Bentonville, driving down its Central Avenue bracketed in beautiful redbuds and dogwoods, for the always-yummy four-cheese ravioli at Tavola Trattoria. The nearby alley had a sign which age had rendered ironic, in keeping with how “modern” the Paley collection would be, and was graced by a nice painting by Karrie Evenson. We enjoyed the tulips in the square, and Wendy had great fun perusing the thousands of images in a mural created from drawings by Bentonville schoolchildren displayed on the sides of a couple of buildings. The themes were excellence, respect, and service. 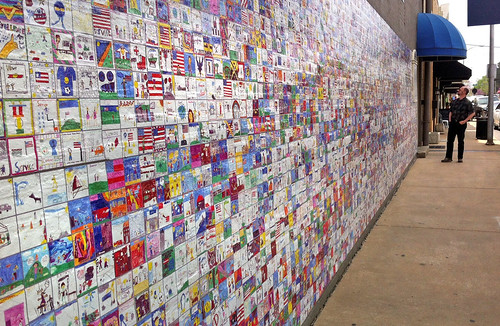 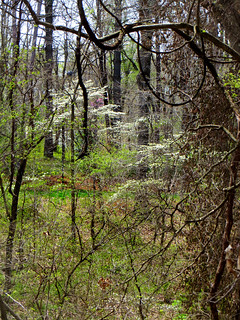 We parked at the museum and began walking northward on the Dogwood Trail along the eastern edge of the property. The trail lived up to its name, with dogwood blooms evident all along the one mile walk, layers of blooms scattered amidst the other still-bare trees. We turned back south to reach the museum via the Rock Ledge Trail.

After stowing Wendy’s bag and my requisite Tilley hat in a locker downstairs, we walked up to the lobby and the Eleven restaurant, where I was charmed to see they have removed the unappetizing Alphabet Soup sculpture by Claes Oldenburg, which used to sit at the restaurant entrance. They have thankfully replaced it with the beautiful Hanging Heart (Gold/Magenta) by Jeff Koons, which now hangs from the high ceiling of the bridge room. It created a lovely backdrop for a picture of Wendy as we enjoyed soft drinks after our warm walk. 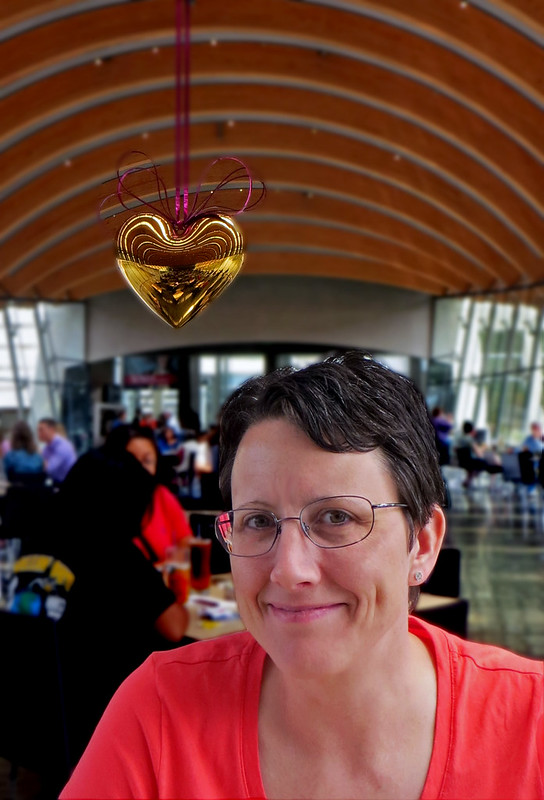 Koons is known for his kitsch, leading the wonderful critic Robert Hughes to say his work was “so overexposed that it loses nothing in reproduction and gains nothing in the original.” But Hanging Heart seems a suitable adornment for the restaurant; I’ve similarly enjoyed the museum’s Love sculpture by Robert Indiana, which is subject to similar criticism for how he has repeatedly recycled that motif, but which doesn’t diminish its attractive appeal. Winter before last I used Indiana’s sculpture at Crystal Bridges to represent the love of friendship with my dear friend Carrie and last spring Wendy and I celebrated our new love with it. I think of these works as “applied art” which make the museum more welcoming and encourage visitors to engage positively both with art and with each other.

The Paley collection had a work which caught my eye, The Seine at Chatou by André Derain, and the adjacent exhibition of American Modernists who were influenced by the European artists had one work by Marsden Hartley, Mountains No. 22, which is an echo of Cézanne, and a marked contrast to his Madawaska, one of a series of homoerotic paintings he made of a French-Canadian boxer. In one case, Hartley uses golden browns and in the other bright red to draw one’s attention. 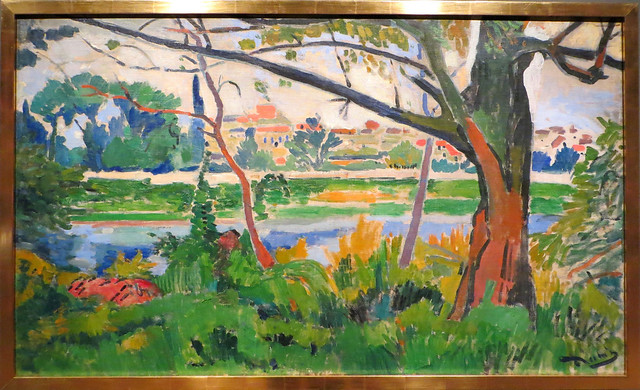 The Seine at Chatou 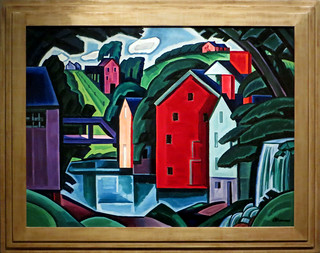 Motive of Space and Form – A New Jersey Village (Montville)

Red Flower by Joseph Stella stood out with its striking use of color and strong symmetries. Glare from the museum lighting forced to me to shoot it off-axis, which is an interesting way to battle with those symmetries. My favorite work in this exhibition was Motive of Space and Form – A New Jersey Village (Montville) by Oscar Bluemner. The bold red central building reminds me of Alley Mill in Missouri.

Wendy predicted I would like Ashe’s House, Charleston, South Carolina by Edward Hopper when she spied it in the final gallery at the exhibition, and of course she was right. I’m just disappointed that I forgot to locate and enjoy his Blackwell’s Island, which the museum recently added to its permanent collection.

In the main galleries they had a watercolor exhibit, where John Singer Sargent‘s Nicola D’Inverno Fishing on the Val d’Aosta was a highlight. The modern art gallery had reinstalled Theodore Roszak‘s 42nd Street (Times Square), which we liked for its bold lines and cubist perspective. 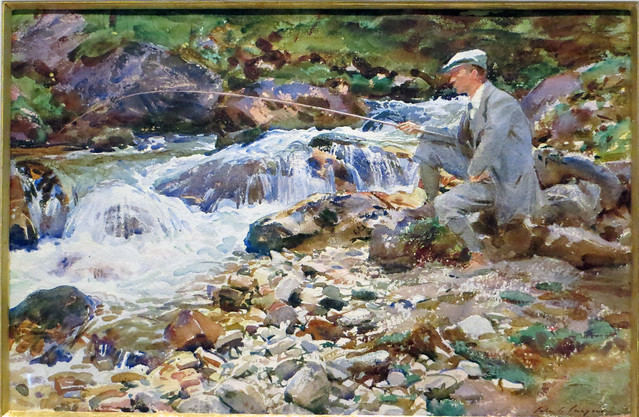 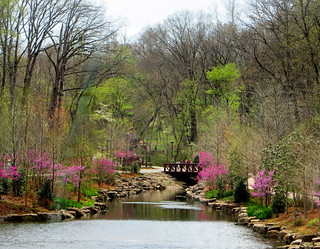 After enjoying views of the grounds in springtime from various vantage points, we retrieved our belongings and exited the museum, finding a skink along our meandering path up to the parking lot, enjoying the dogwoods near and far as well as Roxy Paine‘s Yield. I wanted to hop into a cute Mazda convertible in the parking lot, but instead my trusty old Camry took us north to Bella Vista to visit the Mildred B. Cooper Memorial Chapel.

Bella Vista is an affluent retirement community focused on eight golf courses and other recreational amenities managed by the homeowners’ association. It was the first of several similar developments by John Cooper, whose wife Mildred is memorialized by a public chapel which I’d discovered in TripAdvisor.  A glimpse of the chapel on my iPhone was enough to recognize it as another Fay Jones work, echoing his wooden Thorncrown Chapel which I’ve visited many times near Eureka Springs, as well as his Powell Chapel which I visited two years ago near Kansas City. Thorncrown is particularly striking with its crossed supports, contrasting to the curving metal forming the gothic arches of the Cooper chapel. 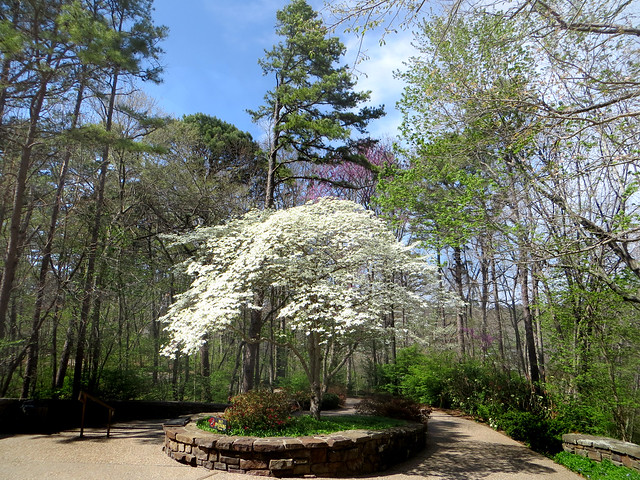 Out front was a nice dogwood which was covered in blooms, and the cool interior with its soft music was a welcome respite from the hustle and bustle of Crystal Bridges. I liked the lightness of its curving supports, with their thrusting but playful ribbons of steel. The airy design belies the 31 tons of steel holding up all of the glass. The main arch at the end of the chapel invites one outside, and we circumnavigated the structure obscured by the surrounding forest. The view upon leaving a place is perhaps as important as the view in approaching it, and both the chapel and its pathway dogwood shone in that respect. 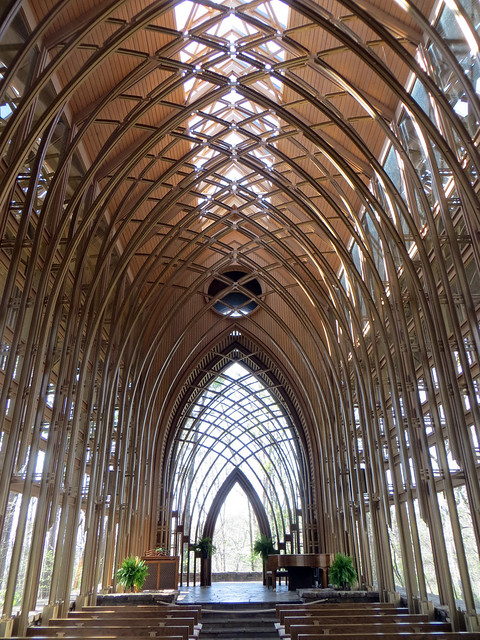 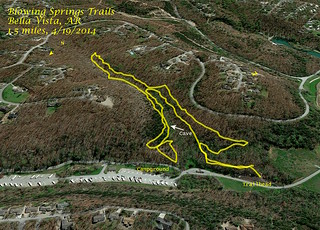 We needed another walk before contemplating dinner, and happily I discovered a listing for the Blowing Springs mountain bike and hiking trails. I enjoyed but was not wowed by the Tanyard Creek trail I trod in Bella Vista back in November 2009, and was glad to find Blowing Springs a peaceful walk along a forest ravine on its South Upper and Lower Trails. Someday I want to return here to hike the northern trails in this system.

We parked and set out uphill, soon to be rewarded with a sweeping view of the bluff across the small ravine. Several mountain bikers passed during our walk, all of whom were quite polite and patient with us clodhoppers. The south side of the lower trail had some nice rocks, while the north side of the south lower trail featured a deep notch in the bluff, which I will affectionately if not accurately consider a cave, and a tree which grew to encompass the top edge of the rock layers. Up a nearby rise are the graves of Mary and Joseph Mills, who settled the land back in 1868. 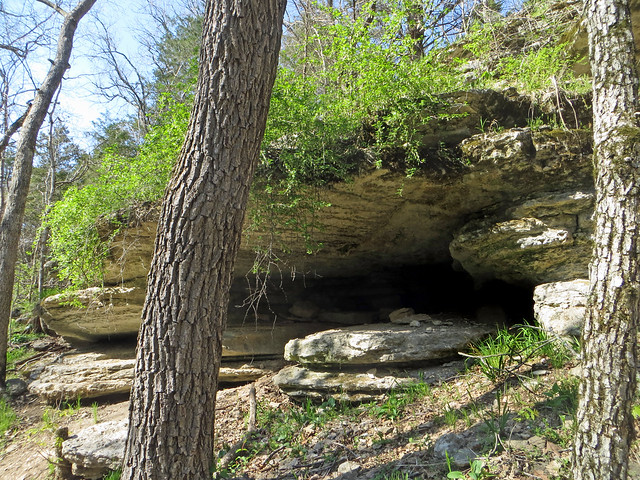 The “Cave” at Blowing Springs

The south upper trail had its own woodsy charm as it led us back above the bluff line, past the curving bridge on the lower trail. We enjoyed more dogwoods and a occasional redbud. Sharp-eyed Wendy spied a rock with crystals, following up on her find at Onyx Cave the week before.

This 1.5 mile walk was a nice end to our day, to be followed by a tasty meal at Abuelo’s back in Bentonville. Sadly, I completely forgot to eat at the local Applebee’s to see the mural they created from my photos for its interior…that must await a future trip.