The first Saturday in May found me trekking to Arkansas to visit the Botanical Garden of the Ozarks in Fayetteville and Blue Spring northwest of Eureka Springs. It was my first visit to the former and a return to the latter after visits in my youth. Wendy would join me the following day for a separate trek to Honor Heights Park in Muskogee, Oklahoma.

The botanical garden in Fayetteville began in 1994 as a dream of Donna Porter, finally breaking ground in 2003 under Carl Totemeier on 100 acres of city property on the east side of Lake Fayetteville, with Phase One completed in 2006. 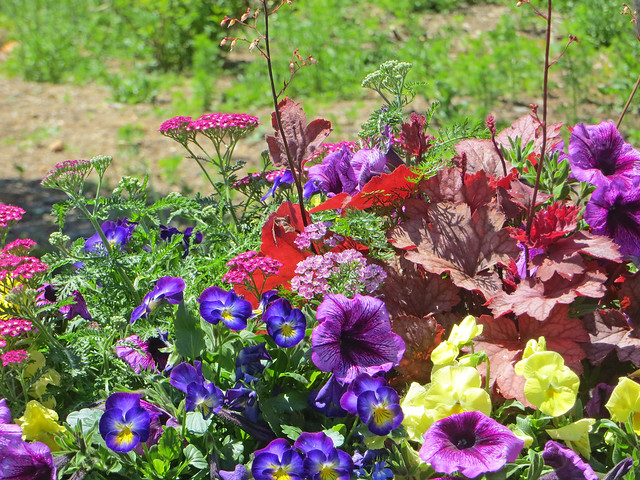 I paid $7 for entry, passing a colorful pot of flowers and a patio bordered by flowers to the Founder’s Garden, with a nice bench and a fountain. A lovely pansy caught my eye as well as an orange ball of petals nearby. The neighboring Japanese Garden was in need of attention, but familiar crops were growing in the Vegetable and Herb Garden, which featured a large colorful corn cob mosaic sculpture and a female farmer sculpture with a hose ready for use. 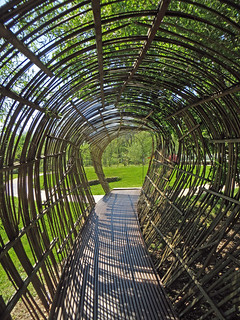 The most interesting garden was the Children’s Garden, with a cute mosaic gardening hat at the entrance and a treehouse or, perhaps, a house like the trunk of a tree. A child-sized archway led to the neighboring lawn, with another portal featuring a nice adjacent tree design. The second portal was a trellis tunnel to the Kiwanis Reading Rainbow where youngsters could sit and read.

The Butterfly House and Pavilion did not have the eponymous denizens in residence, and the remaining gardens were less interesting to me, although I did like a beautiful tulip poking up above some beds and there were colorful flowerbeds in the Sensory Garden.

I had just enough time to drive from Fayetteville to Blue Spring near Eureka Springs and spend an hour there before it closed for the day. Blue Spring operated as a tourist attraction in my youth with a nice film on Eureka Springs history and the spring itself, gushing 38 million gallons of water each day into nearby Beaver Lake, which was once the White River. In 1993 the attraction became Eureka Springs Gardens and is now the Blue Spring Heritage Center.

Entry was $9.75 and my first stop was to see part of the video on the history of the spring and nearby Eureka Springs. There was less historical information on Eureka Springs than I recalled from my youth; I was running out of time for my tour, so I did not see the accompanying video about divers who made it about 250 feet down into the funnel-shaped spring, which plumbed to over 500 feet in depth. 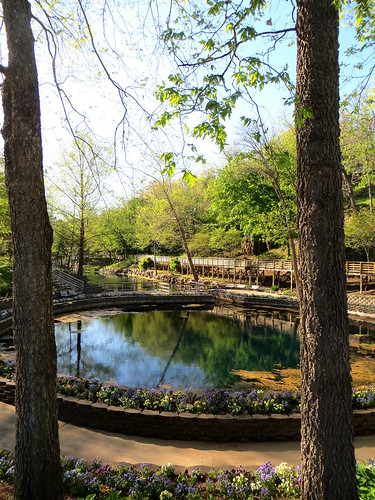 My descent down many steps beside flowerbeds toward the spring lagoon refreshed dim memories. Large trout and bass in the lagoon were completely uninterested in the fish food thrown their way from the feeding deck as I followed the boardwalk to the spring. The large circular pool was still there, with a concrete lid about 12 feet down at the original spring opening. The plain concrete rim has now been adorned with pavers to form a perimeter flower bed, with more beds ringing the surrounding walkway. It makes for a lovely setting.

The only other visitors were three gentlemen from India, two of whom were using nice cameras to take shots of the third against the beautiful surroundings. I speculated that they might be taking photos to send to his arranged bride back home, or perhaps to his relatives in the sub-continent. 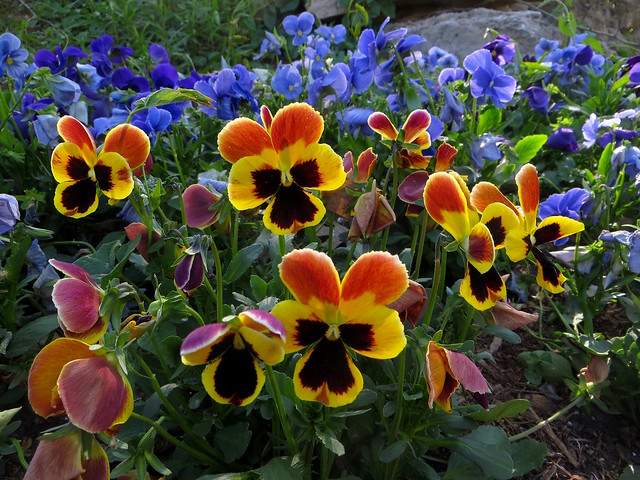 Beautiful pansies, some of which reminded me of Halloween candy corn, adorned the beds. The reflection of the gazebo and feeding deck at the lagoon was enticing as I made my way down the opposite of the lagoon toward the bluff overhang. In 1971, Robert G. Chenall and his students from the University of Arkansas conducted an archeaological dig of that bluff shelter, finding prehistoric artifacts, shellfish and the bones of deer, turtle and other fauna. Some date back as far as 8000 BCE. Chenall also uncovered fire pits and evidence of life such as small arrow points and Woodward Plain pottery, confirming the presence of American Indians dating back as far as 1700 CE. 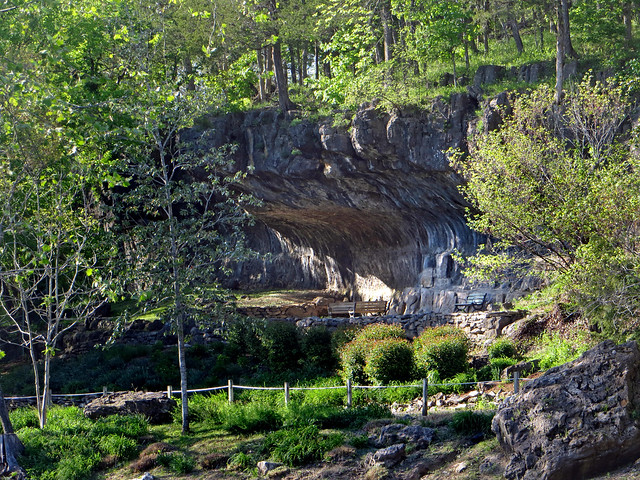 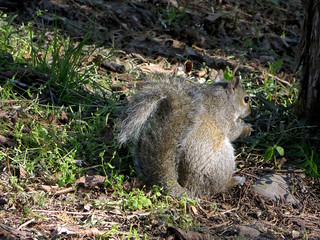 The nearby bluff was pockmarked with small holes, and beyond that the rock garden was carpeted in green growth. I climbed the pretty and more gentle hillside to return to the parking area, passing a chubby-butt squirrel feeding his backside.

The road leading out of the peninsula where Blue Spring is situated offered a nice vista to the west, including a barn and cattle. I drove into Eureka Springs and took the old historic loop through town, finding the downtown packed with folks enjoying the ArtRageous Parade. Unfortunately I was driving through crowded narrow streets and could not capture shots of the revelers. Eating at a downtown restaurant was a lost cause, so I opted for good old Myrtie Mae’s up on the rim and had their delicious fried chicken.

I have booked a cabin at Sugar Ridge on Beaver Lake for Wendy and I to enjoy for a couple of days in early June, so I’ll be back in this vicinity soon; I love Arkansas scenery, but it won’t be long before it is too hot and muggy for the likes of me.