On the first day of our trip west, Wendy and I drove south to Tulsa to begin our journey westward along the modern replacements for historic Route 66, which originally ran almost 2,500 miles from Chicago, Illinois to Santa Monica, California and was immortalized by the song Get Your Kicks on Route 66. Nat King Cole made the song famous, but it has been covered by many artists. As one would hope, Chuck Berry gets the tune rocking, and it remains popular to this day with covers by Asleep at the Wheel and others. But if you want to hear a more complete version of the song, including seldom-heard lyrics, listen to Perry Como’s version.

Wendy and I would be taking Princess the Camry along only one-fourth of the entire route, from Tulsa to the heart of New Mexico, and we would actually take the interstates (I-44, I-40, and I-25) instead of the remnants of the old highway. We did hit actual stretches of America’s Main Street via I-40 business routes in several small towns, but if you want the full meal, aficionados have precisely traced out what remains of the old roadways and documented its fading features. The nation’s longest driveable stretch cuts through my home state, and Thanksgiving 2011 found me following much of the old roadway from Oklahoma City to Tulsa, with a brief stop in Davenport.

But for this trip I wanted enough time off the highway to introduce Wendy to one of the major museums in Oklahoma City. So we took I-44 along the Turner Turnpike instead of what is today marked Oklahoma 66. This meant that we, like the vast majority of motorists, bypassed one town after another via the turnpike, towns which are still linked by the old free road: Sapulpa, Kellyville, Bristow, Depew, Milfay, Davenport, Chandler, Warwick, Wellston, Luther, Arcadia, and Edmond. The high-speed limited-access interstate cuts 37 minutes off the 2 hours and 21 minutes it takes to make the journey from Tulsa to Oklahoma City on old 66, never mind how long it must have taken to drive a Model A along the original meandering route in the 1930s or the slow progress of the converted Hudson truck which carried the most famous travelers of Route 66: the fictitious Joad family in Steinbeck’s The Grapes of Wrath, who didn’t join the Mother Road until they reached Oklahoma City. It was fitting that our own journey along the 66 route began in Tulsa, since that was the home of Cyrus Avery, the Father of Route 66.

Does a Cowboy Hall of Fame by any other name smell as sweet?

Our destination, after a tasty lunch at a TGI Friday’s in Tulsa (the French Dip is back!), was the National Cowboy & Western Heritage Museum in Oklahoma City. I visited it repeatedly in my youth, back when it was new and was called the Cowboy Hall of Fame. Persimmon Hill in northeast Oklahoma City was selected as its location in 1955, but it would be a decade before the museum opened. It declined into receivership by the mid-1980s, but in the 1990s was revitalized and expanded to over three times its former size, changing its name in 2000. My father helped me discover some years ago that the best time to visit the museum is during the annual summertime Prix de West invitational exhibition, with several galleries filled with wonderful paintings and sculptures which are for sale. That event highlighted our visit. 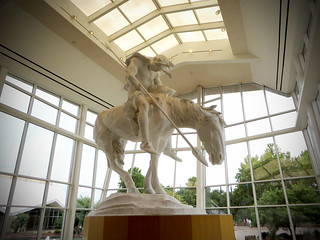 The End of the Trail

One of several versions of End of the Trail

The museum’s redesign means that what was once the end of a visit is now the beginning: the 18-foot plaster version of James Earle Fraser’s End of the Trail. In 1894 Fraser created a small bronze version of the piece for the World’s Colombian Exposition in Chicago; the monumental reworking in plaster was created for the 1915 Panama-Pacific International Exposition in San Francisco, California. World War I meant that bronze was not available for a casting. While many plaster sculptures for the exposition were destroyed, the residents of Tulare County, California, rescued and restored End of the Trail and placed it in Mooney Grove Park in Visalia, California. In 1968 the Cowboy Hall of Fame acquired Fraser’s studio collection, and the plaster version was acquired by the museum in exchange for having a bronze version cast from it which was placed back in Mooney Grove Park.

Coming Through the Rye

The outdoor plaza features a monumental version of Frederic Remington’s original small bronze Coming Through the Rye. Wendy loved the spirited action of the piece, which Harold McCracken described:

Coming Through the Rye represents four cowboys mounted on broncos dashing at full gallop, waving their six-shooters over their heads with quirts flying from their wrists.  They have the spark of abandon and deviltry in their hollow eyes; and their mouths are open as though in the act of shrieking out some wild Western apostrophe to the red gods of recklessness.  The broncos, snorting and straining forward, are shoulder to shoulder, and their flying hooves emphasize the devil-may-care of such a mad ride. 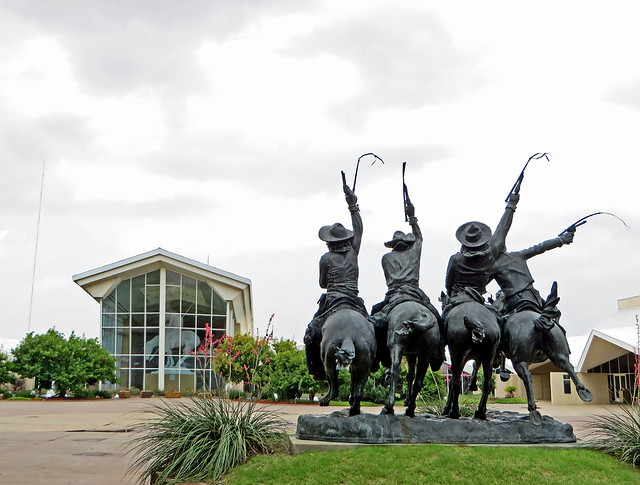 Coming Through the Rye to The End of the Trail

The plaza sculpture has the riders coming in to party at the museum, in stark contrast to the somber End of the Trail inside. I knew that a sign of Remington’s skill in the original bronze is that only six of the sixteen horse hooves touch the ground; the horses on the ends seem completely airborne. So I paid attention to the monumental version and noticed the sculptors had to cheat on that: two of the four hooves on the right horse are grounded. Physics is everywhere!

What I wasn’t familiar with was the title of the work. It turns out that Comin’ Thro’ the Rye is a poem/song by Robert Burns with several versions. His bawdy version of the piece, with a certain four-letter verb replacing ‘kiss’, seems in keeping with spirited cowboys riding into town to see their, er, sweethearts. Literary types will know that the poem became widely known in the 20th century because of Holden Caulfield’s misinterpretation of it in Salinger’s The Catcher in the Rye, but I’ve never read that book, already having enough teen angst and alienation in my line of work. 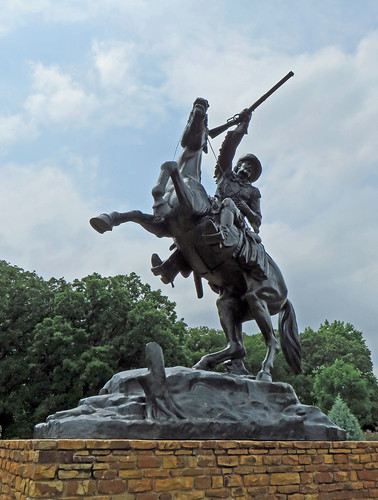 The Legend of the Westerner

Wendy and I strolled through the grounds, although it was hot. They’ve done a lot of work to make the grounds more refreshing, with many rock ponds and plantings. The old plaza, however, is no longer a big fountain pool. Leonard McMurry’s 33-foot 19-ton statue The Legend of the Westerner, which depicts Buffalo Bill Cody, was added to the grounds in 1976 and once dominated the skyline as one drove past Persimmon Hill on I-44. But the trees have grown up to fully obscure it from the road. My favorite memory of this statue is when it had a wasp nest stuck in the horse’s crack, which explained why it was rearing up! 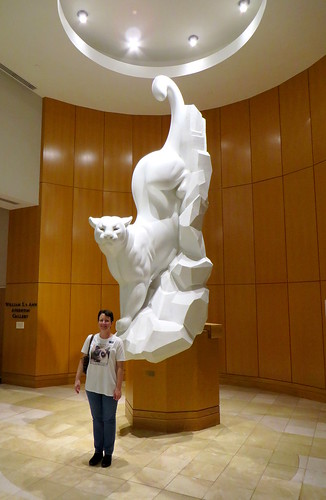 My princess with Canyon Princess

My favorite statue at the museum these days is one they added in 1995: Canyon Princess by Gerald Balciar, a 15-foot-high 8-ton depiction of a female cougar in Colorado yule marble. The beautiful sinuous lines of this cat, contrasting to its blocky bluff, greet you as you enter the main art galleries. I had Wendy pose beside it so you can grasp its scale, and if you look closely you might notice she is fittingly wearing a Grumpy Cat T-shirt.

There were many gorgeous paintings on display in the Prix de West exhibition, but unfortunately photography was prohibited; you can instead take a look at the online catalog. Wendy liked the bright colors of paintings by Walt Gonske. George Hallmark’s Sagrado (Sanctuary) reminded me of Bartlesville’s La Quinta mansion. Jeremy Lipking’s Silence and Sagebrush was a standout, along with the ultra-realism of Kyle Pozin’s Old Souls and Curt Walter’s Gathos Reawakening. A fellow visitor pointed out to us how Craig Tennant includes hidden images in his works, helping us spot tiny images of Christ and the like amidst the rusting trains in his exhibited paintings.

Wendy was awestruck to see Bob Wills’ fiddle in the museum’s collection, which we would reminisce about as we left Amarillo a couple of days later. You can watch him fiddling in a breakdown, although what always makes us grin are his enthusiastic utterances in his performances with the Texas Playboys. His own explanation of what made him holler was disingenuous; clearly it was the music which made him call out, somewhat like how Pérez Prado would call out “¡Dilo!” (Say it!) during his own band’s performances, such as the wonderful Exotic Suite of the Americas. 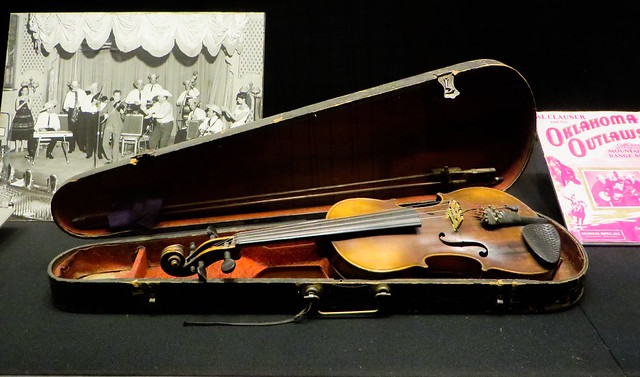 Wrapping Up Our Tour

One of the later parts of our tour was a walk through Prosperity Junction, the recreation in the museum of an old western town at dusk with interesting audio accompaniment. I liked seeing and hearing that again, although I dearly miss the tiny old mine and train tunnel down in the basement of the museum which I loved passing through as a child.

Two displays at the museum that would be echoed repeatedly on our travels on this trip were of cameras of varying vintage and images of John Wayne. I have my own online camera gallery, while I have far less interest in The Duke. I think the only two movies of his I recall beyond their titles are Operation Pacific and The Alamo. I know I’d probably enjoy some of the films he made with director John Ford if I worked up the courage to see them, but I burned out on bad westerns as a child and thus generally avoid that genre.

We exited the museum to find a couple climbing into their old Citroën, a 2CV6, in the parking lot. Little did we suspect we’d see them again the next day when we stopped at the museums in Elk City, Oklahoma to break up the long drive to Amarillo. Our day concluded with a visit with my folks and dinner out with them at Johnnie’s. We spent the night at our hotel of choice in OKC, the Cambria Suites, before heading due west for the four-hour drive to Amarillo in the dry and dusty heart of the Texas panhandle.

I enjoy day hikes, photography, podcasts, reading, web design, and technology. My wife Wendy and I work in the Bartlesville Public Schools in northeast Oklahoma, but this blog is outside the scope of our employment.
View all posts by Granger Meador →
This entry was posted in art, music, photos, travel, video. Bookmark the permalink.