Day 3 of our vacation was the last big leap westward, but before setting off down I-40 to Albuquerque we had a few places in Amarillo to see.

I’ll admit I’ve never enjoyed the long haul from Oklahoma City to central New Mexico, and for years all I knew about Amarillo was the Big Texan Steak Ranch’s gimmick of a free 72 ounce steak if you can choke down that huge slab and fixin’s in an hour. But last year Wendy and I enjoyed the Texas! musical in Palo Duro Canyon south of town and explored the beautiful canyon the following day. So what could we do this time around? It was up to TripAdvisor.

First it led us to the nearby 575 Pizzeria for a delicious lunch. Then we drove over to Jack Sisemore’s Traveland to tour his RV Museum. It was in an un-air-conditioned metal building out back, but thankfully they had big fans roaring to keep the air moving. We walked in to find an array of very old trailers in the first room, including two suspended from the ceiling!

The oldest was one of only five 1921 Ford Lamsteed Kampkars ever made, which would have set one back $535 and was mounted on a standard Model T Ford chassis. Wendy posed beside a 1937 Kozy Kamp, one of the first tent trailers, while a 1936 Alma looked like a larger version of the kind of trailer my paternal grandparents used when they went to coon hunts in Thomas Hollow, Missouri. It brought back memories to see the real wood interior and icebox.

My Dad and I preferred this RV

It wasn’t all trailers in there, however. There were motorcycles and a wooden 1963 Chris Craft boat to boot. They had a 1967 VW bus, but no Volkswagen Westfalia pop-top campers; my father went through several of them over the years, and I joined him in one for a long trip out west back in 1991. Yes, I got to sleep up in the popped top. 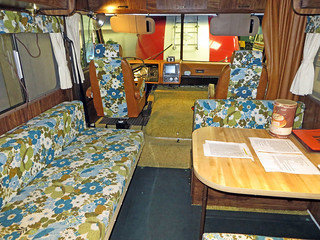 Thank goodness the VW camper never looked like this!

As for a serious motor home, Sisemore has the first Itasca motor home ever built by Winnebago Industries, back in 1975. Its interior fabrics were something else.

A 1962 Bethany pop up trailer had a head start on the Itasca, however, as far as grotesque fabric patterns. It was so loud you’d go deaf trying to sleep in there. 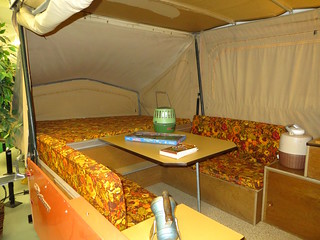 There were many more RVs at the museum, and after touring them all we wanted to add our own pin to the visitor map, but the continental U.S. was fully filled in. Hooray for Jack Sisemore and his obsessive collecting of recreational vehicles.

On our way out of town I made sure to stop by Cadillac Ranch. Wendy was unaware of how the Ant Farm art group had buried a series of old Cadillacs nose-first into the Texas prairie back in 1974. The millionaire prankster (and possible pedophile) Stanley Marsh 3 sponsored the effort, and he had passed away less than two weeks before we arrived.

We pulled up and walked over to the cars, which are constantly subjected to graffiti. Folks were milling about, some eagerly spraying paint onto the hulks. Long caterpillars were inching across the dry, cracked, spray-painted ground as I posed amidst spent spray cans. We viewed the tops and the bottoms of the cars, which were thoroughly coated with paint. The hulks are falling apart, but folks were having fun. 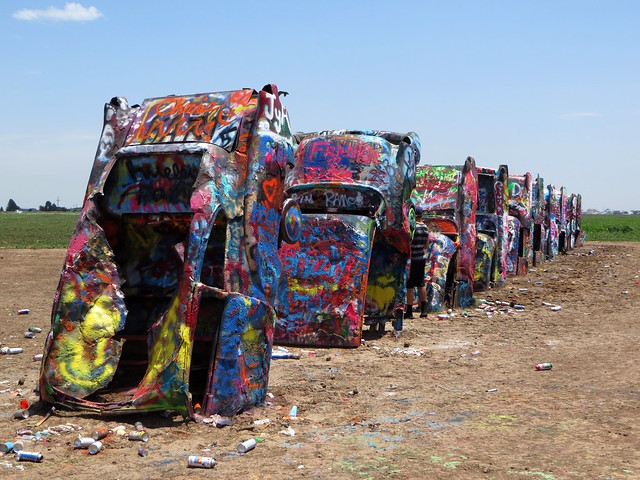 You can take the installation as a comment on planned obsolescence or the whims of fashion which gave cars meaningless tailfins only to have them atrophy in later years. Let’s see what the incomparable Robert Hughes had to say about these vehicles:

They were designed and marketed as fantasies: as works of art, in fact, in their own right. They were unveiled, like public sculptures, on rotating plinths, under spotlights. Their makers in Detroit rejected the dicta of Puritan heritage behind the early Fordian idea of a black box on four wheels. The fifties car was a rocket, onto which a heavy layer of symbolism and body metaphors was packed. It had things ostentatiously both ways, as both womb and phallus. The dreamboat had the tail of a rocket and the chrome breasts of Jayne Mansfield – a design feature that the designers, in homage to a now forgotten Scandinavian sex bomb of fifties TV, called a ‘Dagmar.’ When you hit the brakes, the whole rear end lit up red, like a robot animal in heat. Ultramatic ride, Dynaflow penetration, Triumph, lust, aggression, and plenty of room for the whole family: the siren song of imperial America. Nothing like them will ever be made again. They’re the rolling baroque public sculpture of a culture that has gone forever.

We now faced the long uneventful drive west to Albuquerque. As we pulled out from Amarillo’s Cadillac Ranch, we recalled an old Bob Wills song: “When you leave Amarillo, turn out the lights.” If you listen to the recording, made with the surviving members of the Texas Playboys in 1973 as Bob directed from a wheelchair, you will hear the velvety crooning rent by Bob’s hollers, reduced to croaks and moans by a hard life. That was the last time Bob hollered: he had a major stroke that night and never regained consciousness. The Playboys were in tears the following day as they re-recorded San Antonio Rose, knowing they’d never play with Bob again.

That was a somber thought as we whizzed westward past towns still struggling to survive after their Route 66 main streets were bypassed by Interstate 40. Amarillo is thriving, but who will be left to turn out the lights in Cuervo or Endee or the like? We’d contemplate that more on our return trip; for now we were focused on reaching Albuquerque before dinnertime.

We celebrated our arrival in the town named after the eighth Duke of Alburquerque with dinner at Buca di Beppo before retiring at the historic Hotel Andaluz, our base of operations for the next day’s exploration of Sandia Peak and the Indian Pueblo Cultural Center.

I enjoy day hikes, photography, podcasts, reading, web design, and technology. My wife Wendy and I work in the Bartlesville Public Schools in northeast Oklahoma, but this blog is outside the scope of our employment.
View all posts by Granger Meador →
This entry was posted in art, music, photos, travel. Bookmark the permalink.