Wendy and I decided to spend some of the time between Christmas and New Year’s, a period which I shall term Twixtmas, in Kansas City, MO. This shorter trip 200 miles north was a deliberate contrast to our longer vacation the prior Winter Break, when we drove 575 miles south to San Antonio, TX. Rather than fleeing it, we would allow winter to embrace us in its grip. It made our time together in the Paris of the Plains all the cozier. The map below provides the locations of the Kansas City attractions we visited, and you can click here for a slideshow of our trip.

A couple of days before we embarked, we hiked 3.5 miles at Osage Hills, knowing that we’d soon be walking cold urban sidewalks. It was relatively warm and sunny on the bluff above Sand Creek. The Creek Loop was mushy, and Sand Creek was running well from recent rains. 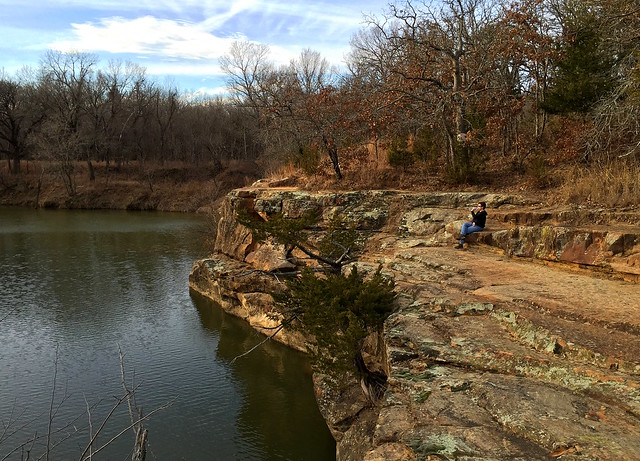 The day after Christmas we headed north out of Bartlesville, stopping at the Copan Truck Stop for a huge and delicious cinnamon roll, slathered in thick icing. We arrived at Kansas City’s Union Station in time for lunch at Harvey’s. The immense Grand Hall and North Waiting Room were decked out for Christmas. At one end was a lovely, huge Christmas Tree, with more trees and nutcracker guards up high. Holiday lighting at the entrance and along the length of the North Waiting Room invited one to walk its length to arrive at a nice display at the entrance to the Model Railroad Experience. 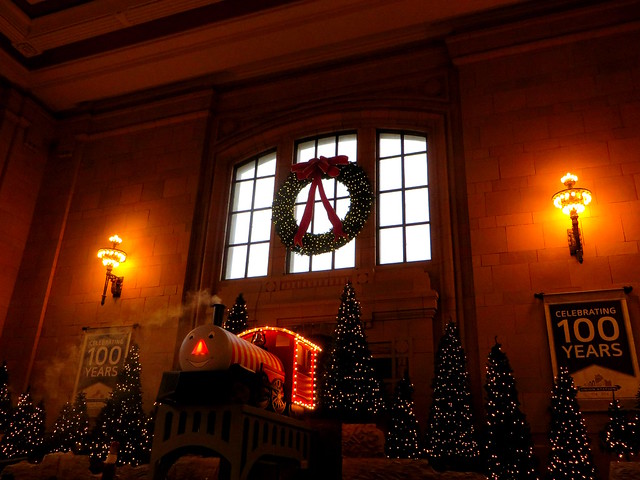 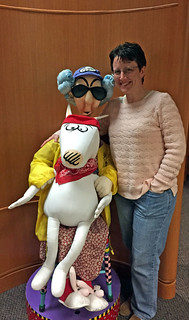 Wendy and Maxine (and Floyd)

We took the The Link, the enclosed elevated walkways, over to Crown Center, enjoying the view of the downtown skyscrapers. We toured the Hallmark Visitor Center, where Wendy posed with crabby old Maxine and her dog Floyd. Then we walked over to the lobby of the former Hyatt hotel, the site of the infamous skybridge collapse I analyze in my Failure By Design lesson.

Our own hotel for this stay was a few miles to the south at Country Club Plaza. I eschewed the Best Western Seville Plaza, where I’ve previously stayed, for fancier top-floor accommodations at the well-located Courtyard by Marriott, which is housed in the 1925 building which was once the Park Lane Apartments. I am always glad when an old building is successfully renovated for continued use, and judged this renovation as a great success. 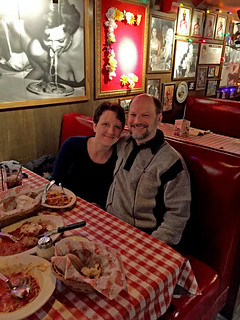 During the trip Wendy and I enjoyed dining at Buca di Beppo and other Plaza restaurants, although I regretted not planning ahead so that we could finally have dinner out with a gracious former student living in the KC area who has repeatedly offered her and her husband’s hospitality during my infrequent visits to the area. Wendy loves KC, so hopefully we can finally connect on a future trip.

The Plaza was outlined in lights at night, although it was not nearly as impressive as the Christmas lights we saw earlier in the break in OKC. 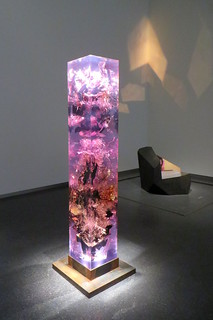 We walked over to the Nelson Atkins Museum, my favorite KC destination, which was also decorated for Christmas. Wendy liked Wayne Thiebaud‘s Apartment Hill, and I thought that the Synthesis resin columns by Tom Price looked like something out of Star Trek. We quested through the museum for truly small treasures: a few items from the city’s Toy & Miniature Museum deposited in various rooms while the museum undergoes renovation. Then we enjoyed a chocolate cupcake in the museum’s Rozzelle Court before venturing upstairs where we found an interactive create-your-own-Rodin-sculpture kiosk. Both my effort, Despair, and Wendy’s creation, Strength, make me question what was in that cupcake.

The bright sky beckoned us back outdoors, where teepees set up on the grounds contrasted with the stately nearby residences. Along our walk back to the Plaza, we discovered, on the grounds of the Kansas City Art Institute, the life-size statue of Thomas Hart Benton sculpted by Charles Banks Wilson and Nick Calcagno in 1989. 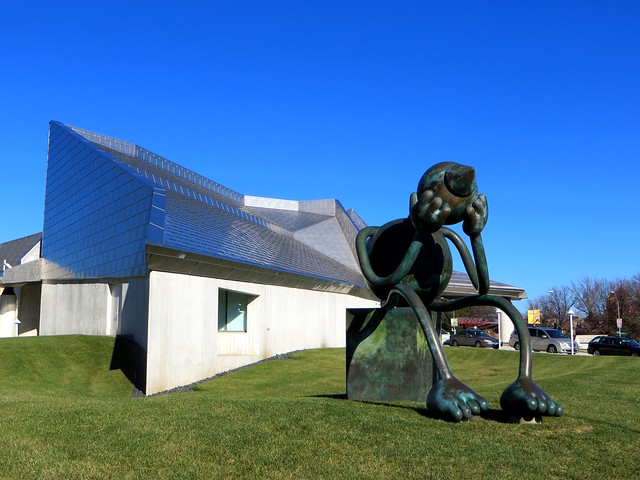 No that is NOT Thomas Hart Benton; Crying Giant shows how I feel about the Kemper

On another day we walked over to the Kemper Museum of Contemporary Art, which inevitably disappoints me. Crying Giant by Tom Otterness reflected my view of most of the works on display, while Wendy is more accepting of contemporary art and enjoyed June Ahrens’ Used and Worn display of used soap and other materials. She also got a kick out of Elizabeth Layton’s I am Loved. In it, Grandma Layton (she didn’t begin drawing until she was 68) depicted an elderly woman holding her wedding dress up to her body.

Myself, I am a great admirer of Wendy’s own creations. Just before we left for Kansas City, she completed her third paper mosaic, depicting a bear hidden amongst autumn trees. It joins her earlier depiction of a winding snake and a thunderbird, all originally inspired by the tile work we saw this summer at Albuquerque’s KiMo Theatre. 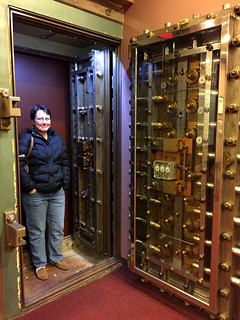 My Treasure in the vault

We ventured downtown to tour the public library housed in a renovated bank building, including the big vault turned into a film room and a small vault Wendy had fun posing inside. Out of one window we spied two pigeons huddled together atop a stone eagle. Wendy and I agreed that snuggling was the best remedy for the cold weather.

We also drove to the very northern end of Main Street to walk the Town of Kansas Bridge which leads out over railroad tracks to a platform above the south bank of the Missouri River. A train passed under us as we walked toward the river’s edge, where stairs led to the Riverfront Heritage Trail. Signage provided history on the early years of Kansas City and told of the task of taming the riverfront bluffs in the mid-1850s. I found the stark riverfront and industrial zone unwelcoming, but Wendy liked it, posing atop a giant round concrete platform adjacent to the trail.

I wanted to drive along Cliff Drive northeast of downtown, but it was at least temporarily closed to vehicular traffic, and the surrounding area was too sketchy for me to feel comfortable with a long walk along it. A petition seeks to close the drive to vehicles permanently; I don’t live there, so I only have the out-of-towner perspective that I’d rather drive it than walk it. A beautiful sunset compensated for the inaccessibility of the planned cliffside drive. 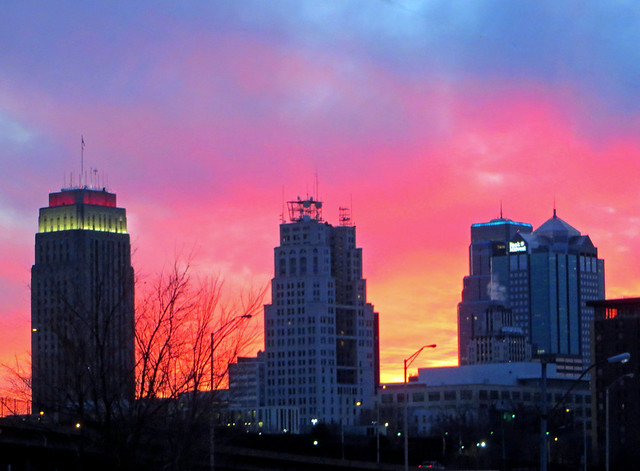 Wendy and I also visited The Scout statue overlook of downtown after dark to see the lights and the red glowing flame effect atop the tower at Liberty Memorial. The cold and the lack of a tripod prevented me from getting a sharp panorama, so we drove over to Liberty Memorial for a closer look at the tower and its top as well as nice views of Union Station and the old Western Auto sign. I was able to steady myself there for a sharper panorama of downtown Kansas City. 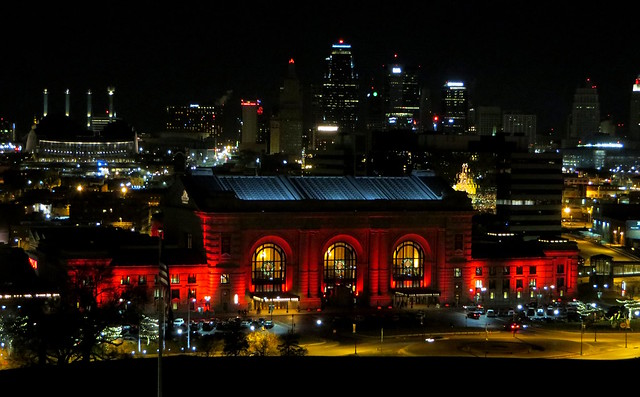 Heading Home with a stop in the 1950s

On our way back home, we stopped at the Johnson County Museum in Shawnee to tour their 1950s All-Electric House. The colors, fabrics, materials, and items of that era have been faithfully gathered together or reproduced in it. Some of the “modern features” were laughable, such as the switch to slide back a painting and reveal the black-and-white tube TV behind it, but some of the home automation features were quite similar to today’s Smart Home ideas. I think the real highlight of Shawnee for Wendy and me was their large Russell Stover store, where I stocked up on half-price milk-chocolate-coated marshmallow Santas.

Kansas City is always fun, and Wendy and I both look forward to returning there someday. Winter’s cold grip will probably keep us off the trails for awhile, but a wonderful New Year awaits.

I enjoy day hikes, photography, podcasts, reading, web design, and technology. My wife Wendy and I work in the Bartlesville Public Schools in northeast Oklahoma, but this blog is outside the scope of our employment.
View all posts by Granger Meador →
This entry was posted in art, day hike, photos, travel, video. Bookmark the permalink.