Wendy and I began our Spring Break 2015 separately, with her enjoying some antique and thrift store shopping in Claremore while I ventured to Wichita, Kansas to visit the Wichita Art Museum. Wendy discovered a disturbing doll and other troubling items, while I enjoyed seeing a father hoisting his young son overhead for a close-up of Chihuly’s Confetti Chandelier. 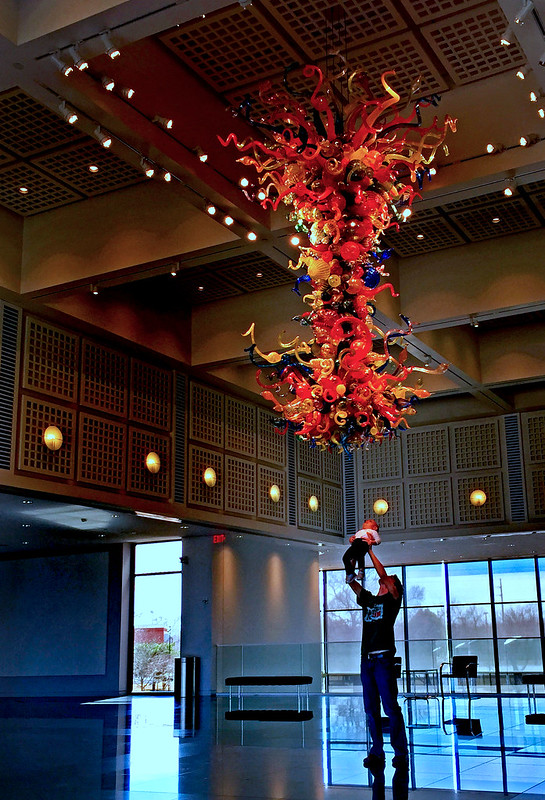 But on Monday we reunited for a five-day getaway to Branson, Missouri and Beaver Lake in Arkansas. 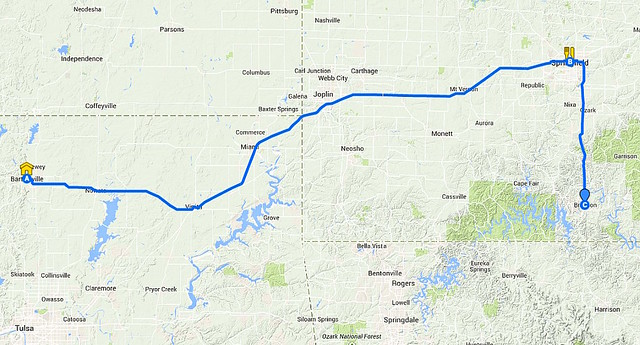 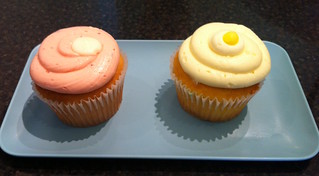 Our cupcakes from The Cup

We had a lunch stop at Houlihan’s in Springfield, Missouri, where I enjoyed a wonderfully prepared French Dip. Then we headed downtown for decadently delicious cupcakes from The Cup. I say decadent since each of their cupcakes packs in 500 Calories, which is rather ridiculous.

Also ridiculous, but amusing, was the odd parking meter sculpture on the nearby street corner. It turned out to be a “giving meter” for which the proceeds go to charity; the city has installed a number of these in an attempt to reduce panhandling.

We were glad to see that the 1910 Woodruff building is being renovated, and I took some video of the large crane elevator along one side of it. The building will become the Sky Eleven high rise, with space on the bottom floor for shops and restaurants, while the rest will be residential units, recently refocused on student housing. The building had a handsome exterior back in the early 1900s, but a late 1950s expansion apparently gave it an unfortunate aqua veneer which the new developers will evidently embrace.

Our vacation would begin with three days in Branson, which boomed in my lifetime to become a significant entertainment destination with a slew of live music shows. My parents had a vacation home on Table Rock Lake for thirty years, but it was on the opposite end of the lake at Eagle Rock. We mainly visited Branson for Silver Dollar City, and I don’t recall seeing any music shows there until my father and I saw Shoji Tabuchi’s act when I was an adult, although I did hear the Foggy River Boys back in the early 1970s, back before they moved to a Branson theater. I did not hear that group at their Kimberling City theater, but at coon hunts held in Thomas Hollow west of Exeter at Basil and Glee Duncan’s homestead, where my grandparents would always be camped out in their tiny trailer. 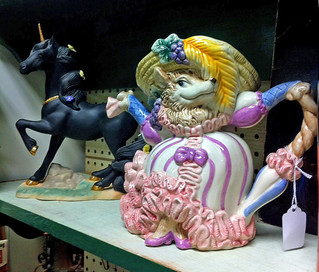 When Wendy and I decided to visit Branson, which she had never seen before, I had her pick out a music show for us. She picked one of the oldest acts in town, and after lunch Wendy and I drove south to the Branson Tourism Center to pick up the tickets I had reserved. Then we drove downtown and shopped in the old 5 and 10 and several thrift stores, where we found more creepy dolls, a Foxy Lady, salt and pepper skulls, and disco outfits. Thankfully we passed on all of these treasures.

Dining and Lodging at the College of the Ozarks

Then we drove to the College of the Ozarks, a storied school known these days as “Hard Work U” because its students work instead of paying tuition. The concept arose in 1901 when a pastor encountered a boy on a squirrel hunt whose parents couldn’t afford to send him to the closest high school 40 miles away in Springfield. The School of the Ozarks opened in 1907 as a tuition-free high school whose students worked to earn their keep, with support including a donation from some of the founders of Nabisco. It soon moved to Point Lookout south of Branson, and in the 1950s it expanded and became a junior college, then became a four-year college in 1965, and became the College of the Ozarks in 1990.

My father introduced me to the school’s restaurant years ago, with dishes featuring food grown on the campus and prepared and served by students. All of the college’s students must work 15 hours a week at an on-campus work station and two 40-hour work weeks during break. On this trip, Wendy and I would not only enjoy their labors in a nice dinner, but over a two-night stay on campus.

The central building of the campus back in the early 20th century was the Maine Hunting and Fishing Club building, which had been transported to the site by sportsmen from the 1904 St. Louis World’s Fair. It was renamed the Dobyns Building in honor of W. R. Dobyns, president of the trustees at the time. The building burned on February 1, 1930 but has been somewhat recreated in the Keeter Center, which has the Dobyns Dining Room as well as beautiful suites at the Mabee Lodge. We stayed in a 672 square foot Loft Suite, which was a spectacular room featuring turn-down service each night where students bring you fresh milk from the campus dairy, chocolate chip oatmeal cookies, and pillow chocolates. A student had called the week before so that our refrigerator could be pre-stocked with free water and soft drinks of our choice, and we were pleasantly surprised to also find a campus-created bag of potato chips, shortbread, and granola bar in our room.

We had dinner at the Dobyns Dining Room, with me ordering the Keeter Cordon Bleu with campus ham, while Wendy enjoyed the Pork Pomodoro, proclaiming her pork medallions the best she’d ever tasted. We indulged in delicious campus ice cream for dessert and were spoiled the next morning with a hot breakfast brought to and set out in our room by a student. Every student was extremely polite and cheerful, making us feel special. It was a great experience through and through.

Our evening entertainment was the classic Presleys’ Country Music Jubilee. Three years before I was born, the Presley family began a music show at The Underground Theater near Talking Rocks Cavern in Kimberling City, and they made history in 1967 when they built the first music theater on Highway 76, which is now renowned for its collection of music shows and other attractions.

Gary Presley provided his classic cornpone humor as “Herkimer” and was joined by his son as “Cecil” in fun skits to break up the rapid succession of musical numbers. It was like being at a live version of the old Hee Haw television show.

Beyond the Presley family, Wendy and I both enjoyed the singing and sincerity of Jay Wickizer and Bruce Haynes, although she didn’t care for Chuck Crain’s high tenor. Here is a sample of these singers as a gospel quartet with Crain singing tenor, lead by Tim Gregg, baritone by Haynes, and bass by Wickizer:

It was a fun-filled first day, and the next day would find us touring the odd Ralph Foster Museum at the College of the Ozarks and hiking just off the Branson strip along the bluff of Lake Taneycomo.