An Engagement Out West, Part 1: OKC, Weatherford, and Amarillo

An Engagement Out West

This post begins a new era for the MEADOR.ORG blog. During our last big summer vacation in July 2015, I asked Wendy to marry me. She accepted, having waited years for me to pop the question, and we’ll be married in July 2016.

While I’ve been blogging since the mid-1990s, this blog really took off in 2009 when I began a long series of day hikes accompanied by photographs. As a single man, I often had the spare time to compose lengthy blog posts tied to each series of photographs. It was quite fun to create the posts, and they’ve served as a valuable travel record for me and, for the past few years, for Wendy as well. But editing all of the photos and then composing a post with text links to every photo was very time-consuming. The process has become more of a chore than it should be, so my fiancée and I agreed we should make a change.

For this long-delayed series of posts about our July 2015 vacation, Wendy is taking over the text side of the blog and posting about each major segment of the trip in her own voice. I’m editing the photos and turning them into the usual slideshow, but we’re no longer trying to document every detail of a trip nor provide a thorough, linked explanation for every photo. I’m just adding links to the text to relevant websites and a link to the overall slideshow, and putting a smattering of photos amidst the text. That approach will make it feasible to finally get the photos about our trip posted on the internet, with a reasonable amount of explanation, and still handle our many duties at school. We hope this will allow us to continue to provide you with enjoyable reading and photographs about our adventures together.

Before our big July vacation out west, we had many projects to complete.  Some were planned, and some were not.  First, Granger had to wrap up a few school-related projects.  For many days, he worked on the new BHS website with the goal of finishing before vacation.

At the same time, issues relating to the STEM grant had to be worked out.  On top of this, Granger had to facilitate changes that resulted from the ongoing construction at the high school – ensuring resolution to challenges with classroom furniture allocation and moves as well as sorting through various orders and deliveries of classroom equipment.

The deadlines were unending, and they continue to crop up as we begin the school year with the blending of grades 9-10 into the new BHS. That’s why I’m temporarily taking the helm of the Meador blog – so Granger can continue the many school related projects on which he’s working tirelessly.  Yet, he will still be editing and sorting the accompanying photos. 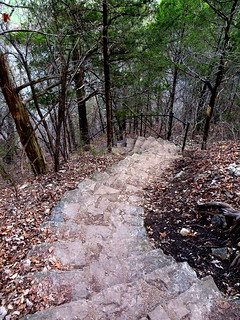 Before our vacation began, as Granger was doing non-stop school stuff, I continued working on an acrylic painting project, replicating a photo of spiral steps Granger shot when we were in Branson last spring.  I am a novice painter who is still learning, but I watch a few Youtube videos to help, mostly Bob Ross.  As he says, “We don’t make mistakes, we have happy accidents.”

Around the same time, I eagerly took on the editing of Granger’s mom’s memoirs, which were partly ghostwritten by his dad, who’s previously written many family histories.  I enjoyed the email correspondence with Granger’s folks, discussing various changes to the book as well as learning the colorful history of his mom’s life. Who else gets the opportunity to better acquaint herself with her future mother-in-law by editing her life story? When things settle down at school, that project will continue with the insertion of many photos Granger scanned.

With all of these planned projects came a few emergency repairs.  At the beginning of the summer, Granger’s car was rear-ended at the intersection of highway 75 and Nowata.  He took his nearly-brand-new silver Toyota Camry to Coachworks and got a rental car, which was an older white Toyota Corolla.

On the home front, he had a plague of plumbing problems.  The air conditioner’s drain hole clogged, causing water to leak into the garage as well as the living room where the piano sits.  I convinced Granger to buy a Shop-Vac, which turned out to be a wise investment.  He vacuumed up all of the water he could from the carpet.  After having dealt with my own leaky water heaters and central A/C units in the past, I suggested he spray Lysol to prevent mold and mildew.  A few days later, I smelled mildew and said, “Did you do the Lysol thing?”  No.  So we did the Lysol thing, and now it smells great.

A week or so later, Granger turned on the sprinklers to water the front lawn. He went about his school-related business inside on the computer but after some time noticed that the running water sounded funny.  Unbeknownst to him, the hose connector out front had broken during the winter.  As a result, the front two bedrooms had sopping wet carpet.  Time for the Shop-Vac.  We were in for a long sweaty evening, vacuuming and stomping dozens of towels into the carpet to remove as much water as possible.  Then I sprayed all of the carpet and baseboards with Lysol.  At last, we hooked up fans all over the place to aid the drying process.

All this time, Granger was waiting for a call from Coachworks to tell him the car was completely repaired.  After some time, we began to worry that we would end up having to drive the rental car, which wasn’t as comfortable as his Toyota Camry.  My Chevy had gotten a check engine light for the third time this summer, and we had no time to get it looked at, so my blue Impala “Xanadu” was out.  She had over 128,000 miles anyway, which would be too risky for such a long trip.  Our friend Betty Henderson graciously offered to let us drive her red Toyota Camry as a plan B.  Fortunately, Granger’s car was ready the day before we left for Texas, New Mexico, and Colorado. 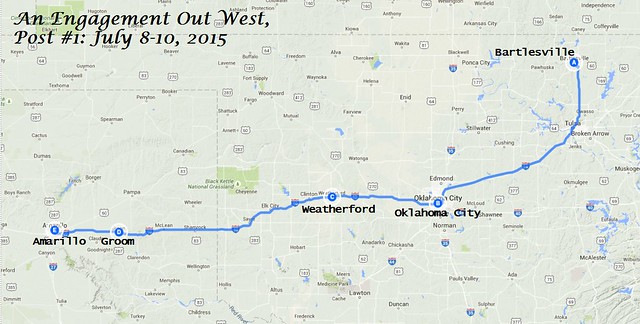 Early in the morning on July 8th, we ventured off to Oklahoma City, where we had planned to attend the EngageOK Conference sponsored by the Oklahoma Department of Education.  All of our chosen sessions were completely booked up when we arrived, even though we had signed up online ahead of time. 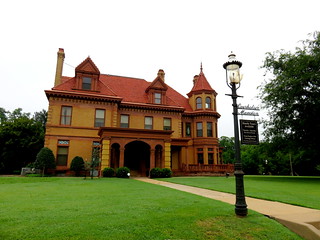 After lunch at Spaghetti Warehouse, we dropped by the Overholser Mansion but did not want to wait for the next available tour. However, we did get some shots of the mansion and the grounds. After that, we visited Granger’s parents.  He scanned pictures for his mom’s book while I shot more pictures of her flowers and various hobbies, happily perused stacks of old photos, and savored coffee time with his dad. 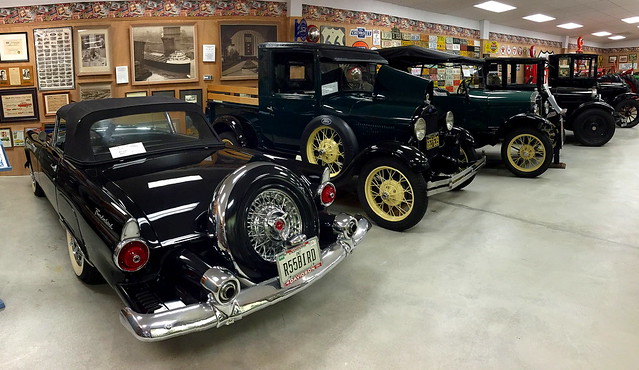 The next day, we headed toward Weatherford, where we visited the Heartland of America Heritage Museum and met a friendly docent, Dr. Les Price from Bartlesville. He informed us that he is part of the renowned family of Price Tower fame. He introduced us to all kinds of technology from yesteryear as well as old cars and Native American beadwork.

Another lively docent showed us a diner where Elvis Presley was known to drop in. We also saw a replica of an old school house.  The lady docent asked Granger if he was a professor.  He told her he is a high school AP Physics teacher, and from then on, we jokingly addressed him as “Professor Meador.” 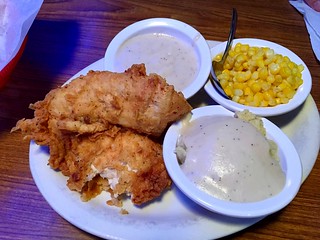 Next, it was on to Amarillo, with a break to walk in the city park at Groom. When we reached Amarillo, we feasted on Blue Sky Burgers.  The following day, we ate at Calico County Restaurant, which we deemed “better than home cookin’.”  As an appetizer, we had mouthwatering mini cinnamon rolls and biscuits.  The chicken fried chicken was perfectly fluffy and crunchy.  After my college stint as a cook at Charlie’s Chicken, I can tell you that this breading was a thing of beauty.  Everything was so delicious that I insisted that we eat here again ASAP.

While we were in Amarillo, we also visited a few art venues.  First, we went to the almost completely deserted Sunset Art Gallery of Amarillo, a huge indoor mall, where only 3 or 4 artists were selling their pieces — their “big event” wasn’t until the following day.  The only life in the place was a scattering of senior citizens strolling briskly around the mall for exercise.  Even though the stop was mostly unmemorable, I learned some painting tips from a friendly retired teacher who was painting a gigantic red poppy blossom on an expansive canvas. 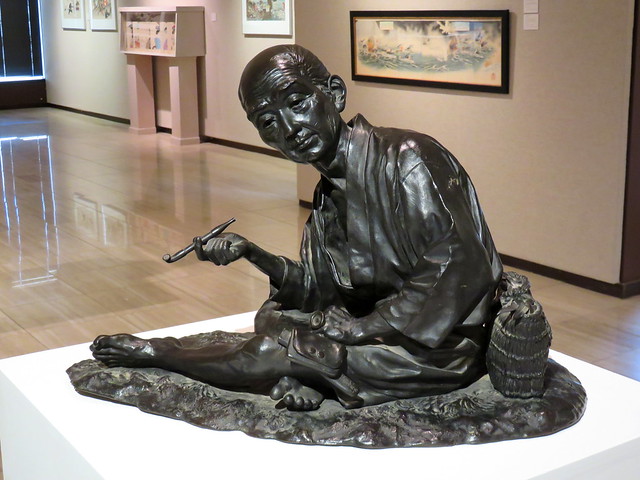 Afterwards, we visited the Amarillo Museum of Art on the Amarillo College campus where we examined works from European, Asian, and Contemporary American Art. The most striking exhibit began with a bright aqua truck similar to the vehicle from Beverly Hillbillies. That was followed by a mind-boggling assortment of paintings depicting the truck or its various parts, and other sculptures, all by John Himmelfarb. Granger was particularly taken by some Japanese bronze statues from its Meiji period between 1862 and 1912, part of the extensive collection of Dr. and Mrs. William R. Price of Amarillo.

That evening, we arrived in Santa Fe just in time to fill up on Tomasita’s:  tamales, tacos, enchiladas, and the green chili sauce that I have been craving all year.  Finally, after a long day of driving, we settled into our casita near downtown.

Click here for a slideshow from these three days of travel

I enjoy day hikes, photography, podcasts, reading, web design, and technology. My wife Wendy and I work in the Bartlesville Public Schools in northeast Oklahoma, but this blog is outside the scope of our employment.
View all posts by Granger Meador →
This entry was posted in art, home repair, photos, travel, Wendy. Bookmark the permalink.

2 Responses to An Engagement Out West, Part 1: OKC, Weatherford, and Amarillo