Honeymoon Day 5: To the Oregon Coast

Posted on December 3, 2016 by Granger Meador

After four days in Portland, we were ready to head northwest to the Oregon Coast. We checked out of the hotel in Troutdale, stopped by the local Wal-Mart for beach shoes, and had breakfast at a Shari’s. Then we drove 85 miles through the forests of the Coast Range mountains to reach the coast at Ecola State Park just north of Cannon Beach. 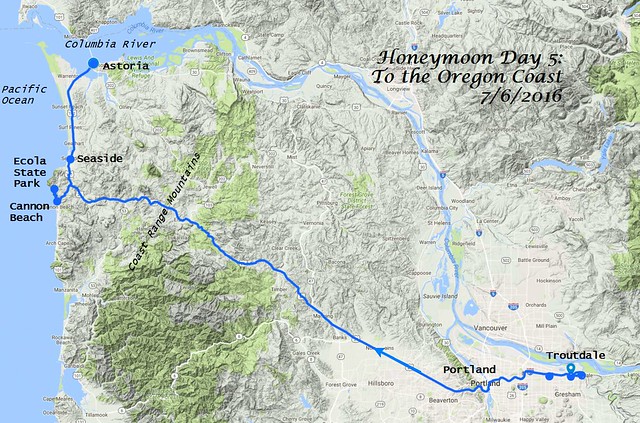 We drove along the narrow winding road in the park to reach a viewpoint I recalled from my first visit a decade earlier: a view south of Crescent Beach from Ecola Point. The parking lot was packed with folks milling about the hillside. To the north was a trailhead that I knew eventually reached the spot from which I had hiked 13 miles back in 2009 to Seaside and back.

I knew the viewpoint was to the south, so we walked over to that side of the hill. Sadly the hillside had eroded so much that the trail to the former viewpoint was closed in December 2015. We could still see Crescent Beach, Haystack Rock, and the Coastal Range, but I was disappointed we could not get closer to the beach. 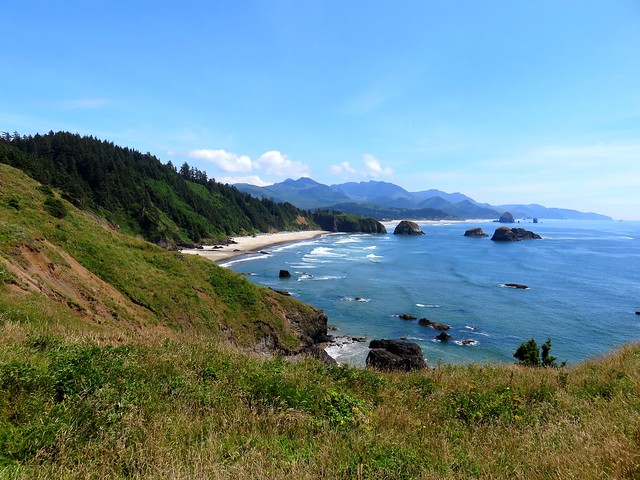 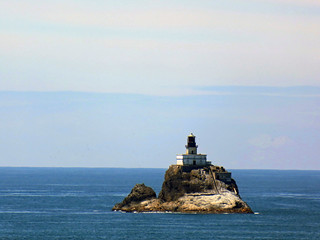 I knew Wendy wanted to walk on the beach, not just take in panoramas, so I led us down various trails, but none led down to Crescent Beach. Later I found online directions that might have led us down to this secluded beach, but there was no useful signage at the park nor on the map we paid for at the gate. I’m left wondering if they deliberately withhold the information.

We did get a view of Tillamook Rock Light, which I could see pretty well using my Canon camera’s 20x zoom despite it being over a mile offshore. Built in 1880-1881, Terrible Tilly, as it was called, was a dangerous commute for its keepers due to erratic weather conditions. Storms have damaged the lighthouse, shattered the lens, and eroded the rock. The lighthouse was decommissioned in 1957 and is now privately owned and reportedly an unofficial columbarium for the ashes of the deceased. Seems like a rather forlorn and not particularly restful final destination to me.

I opted to give up on Crescent Beach and drive us over to Cannon Beach just south of it. I knew that more commercial beach would have a lot more tourists, but at least it would be easily accessible. I’d already read about the limited parking options and took online advice to park at the tiny Les Shirley Park, where we could walk along the north side of Ecola Creek out to the north end of Cannon Beach, away from Haystack Rock farther south where I expected most tourists would be headed.

There were only a few parking spots at the little park, and some were open. So we put on our beach shoes and strolled out along Ecola Creek, with Haystack Rock looming in the distance. We walked over to the ocean, and I shot some video of Haystack Rock to the south. It was bright and sunny, but the cold waves reminded Wendy and me that we were far from the warm waters of the Gulf. One fellow was out flying a kite; later I would watch a teenager struggle repeatedly and unsuccessfully to get his kite aloft.

Some equestrians rode past us, headed north. Looking that way we could see Chapman Point, which separates Cannon Beach from Crescent Beach, and Tillamook Rock on the far left about 3.5 miles away. I got a nice shot of nearby breakers and seabirds with Tillamook Rock looming in the background. 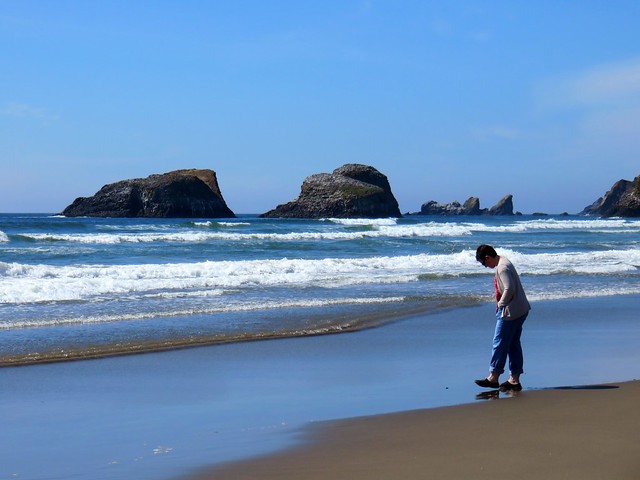 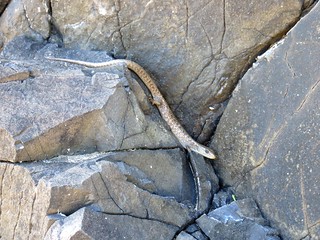 Wendy had fun beachcombing, although she was not impressed by all of the little jellyfish lying about. I watched a fellow in a wetsuit trying to surf.

As we made our way north to Chapman Point, we found little volcanoes of sand and sea debris that someone had constructed. There we spotted a lizard amongst the interesting rocks, capturing some video of his movement.

Near Chapman Point Wendy snapped a photo of some discarded earbuds as three boys walked away along the beach to symbolize casting away the trappings of modern life for the simple pleasures of the natural world. 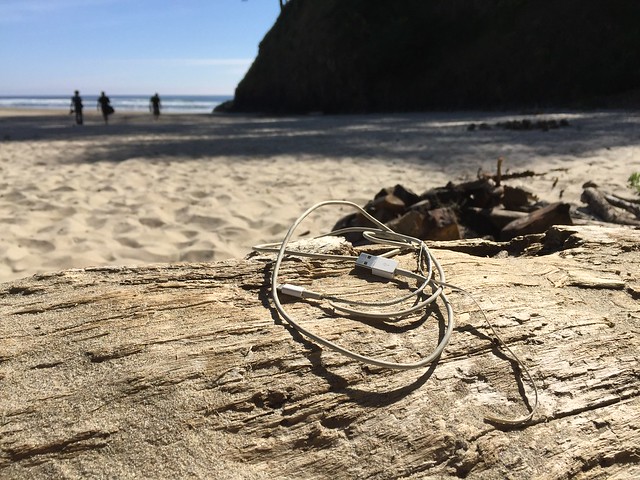 We spent about 90 minutes at the beach before our stomachs told us it was time to eat dinner. There was a convenient spigot at the parking lot where we could wash off our feet. We drove about six miles north to Seaside, where we tried to eat at Nonni’s Italian Bistro, but they were closed. So we walked over to Angelina’s for some nice pizza. Then we had only a sixteen mile drive on up the coast to the mouth of the Columbia River at Astoria, where we’d be staying for three nights.

We stayed at the Cannery Pier Hotel, which is built on the pilings of the former Union Fish Cannery, 600 feet out into the Columbia River. Our suite there cost twice as much per night as our Best Western at Troutdale: location, location, location!

View from our balcony at the Cannery Pier Hotel

While the views from our fancy corner suite were fantastic, Wendy was unimpressed by the lack of air conditioning and an odor in the living room. She traced the smell down, literally, to a rug which someone’s pet had evidently soiled. I hauled the rug out onto the balcony. The next day it was removed by housekeeping, never to return.

Over time we grew accustomed to the sounds of the river coming through the open windows of our suite: the low hum of engines as ships big and small passed by, the occasional scream of a cormorant, and the daytime scouring of the nearby Astoria-Megler Bridge. They are in the seventh year of stripping and repainting that bridge, with the current work shielded by huge covers along a section of roadway and one tower. At over four miles, it is the longest continuous truss bridge in North America, and the renovation work is projected to last through 2021.

Our day closed with a spectacular sunset across the wide mouth of the Columbia River. We’d spend the next two days relaxing in Astoria, the first permanent United States settlement on the Pacific coast.