Posted on December 9, 2016 by Granger Meador

We relaxed for two days in Astoria at the mouth of the mighty Columbia. This little Oregon town of less than 10,000 has a picturesque setting, perched on the southern slopes above the river across from the State of Washington. Fort Astoria was established in 1811 as the first American-owned settlement on the Pacific coast, on land where the Clatsop Indians had lived for thousands of years.

Seven months earlier I had been riveted by Peter Stark’s Astoria: Astor and Jefferson’s Lost Pacific Empire, which told of the harrowing seven-month journey westward of the Overland Astorians from St. Louis to what would become Astoria. Stark recounted how they suffered mightily going down and along the treacherous Snake River.

Amazingly, most of them made it to what would become Astoria, but the War of 1812 brought their enterprise to an end. On the return journey eastward they established the South Pass route which would become a key component of the Oregon Trail. About 200 years later Wendy and I jetted in first class comfort from Oklahoma to Oregon in only a few hours on our honeymoon; what a contrast.

The town thrived back when lumber and fish seemed limitless. Finnish, Swedish, and Norwegian gill-netters worked the river by boat. Calvin Trillin noted in a 1993 New Yorker article, “Astoria’s waterfront was lined with canneries, where the salmon was processed by a contract-labor force so uniformly Chinese that when an automatic fish-skinner was finally invented it was known as an Iron Chink.” The New Yorker has a reputation for meticulous fact-checking, so yes, that is actually what the inventor called it.

2.5 million cans of salmon fill a cannery storeroom in the late 1800s

The town eventually boasted 22 canneries for chinook, coho, and sockeye salmon as well as steelhead trout. Over time, several Astoria canneries consolidated into what became the world headquarters of Bumble Bee Seafoods. In the 1960s Bumble Bee was the largest salmon-canning company in the world.

The town’s population peaked at 25,000 during World War II. After that, improved dredging of the Columbia shifted a lot of port business upriver towards Portland. The fish declined as well; locals noted drops in the fish runs as early as the 1870s, and years of upstream pollution, loss of spawning habitat, heavy fishing, and migration-blocking dams further reduced the salmon runs. Bumble Bee closed shop and moved to California in 1980, soon to be engulfed in buyouts, sales, and bankruptcy.

Commercial fishing, logging, and shipping still contribute to the Astoria economy but nowhere near the historic levels. The town has a variety of historic homes and has become a tourist destination with many museums and shops. 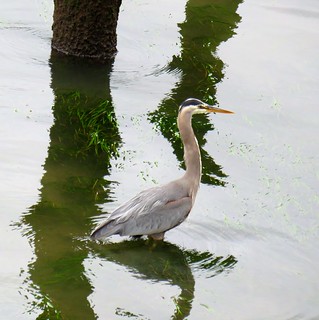 Blue heron by our room

Wendy and I had planned for a couple of rhyming laundry stops along the trip: Astoria and Victoria. So we made use of a washer and dryer at the Cannery Pier Hotel the night we arrived in Astoria. We remained at the hotel the next morning. The occasional rumble of a passing ship and the sounds of sea birds reminded us we were far from the cross timbers and prairies of home. I watched the commercial fishing vessel Katrina go by while a blue heron fished the shallows near our room.

We finally roused ourselves to walk a half mile along the riverside trolley tracks for a late lunch at The Ship Inn. I enjoyed my fish and chips despite the restaurant smelling damp and briny. Rocks piled along the shore had been dumped years before by old sailing ships as they entered the Columbia, picking up sealed and canned salmon. A boiler on a concrete piling and a short forest of worn wood pilings were all that remained of a nearby shoreline cannery.

We saw the San Pablo trolling boat pass by and then the much larger Macaru Arrow cargo ship. The Coral Opal and Bulk Bolivia cargo ships were anchored out in the river. 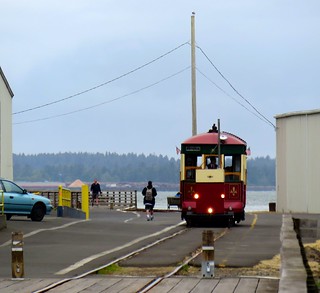 As we walked back along the trolley line, its 1913 trolley car rolled by. The trolley uses former freight railroad tracks and has been operating since 1999. Wendy and I enjoyed the signage on a trolley bridge warning bicyclists they could take a tumble if they weren’t careful. 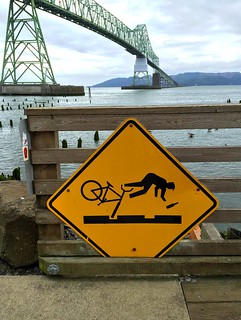 Caution on the bridge

The day was chilly and gray as we stopped to view the many plaques at the Maritime Memorial Park by the river. The memorial is for those who lived and/or died in relation to the water, and the plaques are fascinating.

Mary Boyle “caught the big ones”, and we learned they called Gene Miner “Do-Do”. Scott Arnold was a “commercial fisherman died helping another”, Nancy McClain was “lost at sea” when she was about 21, and as for Big John Viuhkola, “The sea he loved claimed him.” 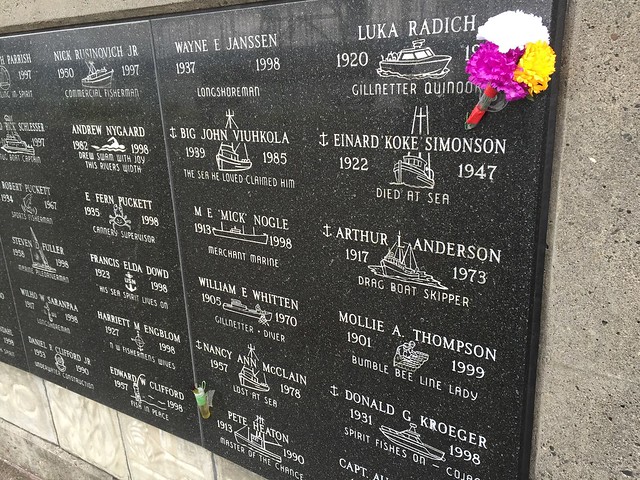 A long inscription wrote of the allure and danger of the sea:

Weep not for me that I go to sea.
I shan’t be lonely, though vastness surround me.
The brotherhood of the sea shall be my family.
The kinship of the deep my company.

Weep not for me, nor worry over harm.
My heart stays with you, still and warm.
In sunrise and starlight my hearth and home
I carry you with me wherever I roam.

Weep not for me, whether bad luck or good.
Tossed about in a shell of steel and wood.
An ancient salt sea sails within my blood –
I but follow its tide through ebb and flood.

Weep not for me that I go to sea:
in the limitless ocean I am free.

During our stay Wendy came to love looking up passing vessels on marinetraffic.com to learn where they were from, where they were bound, and what they carried. It was relaxing to watch the huge cargo ships slowly hum their way downriver past our balcony. I shot some video of the Aries Leader, a ship carrying automobiles in its hold, as it rumbled past.

For dinner we drove over to T. Paul’s Supper Club, where Wendy delighted in the tender and flavorful salmon and vegetables, commenting that “they really know how to season.” We ended our day with a trip across Youngs Bay for supplies at the local Fred Meyer, an immense one-stop shop. Fred opened his first store in Portland in 1922, and his stores now average 150,000 square feet and carry more than 225,000 items.

We had another full day in Astoria ahead of us, time enough to delve into local history by visiting a nearby mansion and the maritime museum.

< Honeymoon Day 5: To the Oregon Coast | Other Honeymoon Posts