One of my favorite drives is the Historic Columbia River Highway, which originally ran 70 miles from Troutdale east along the south shore of the Columbia River Gorge to The Dalles. Like Oklahoma’s later Talimena Skyline Drive, this road was built purely for the scenery. Oregon’s highway was built from 1913 to 1922 and featured gentle curves and a few amazing tunnels. Sadly, only the western third remains fully intact, preserved because of the many waterfalls it meanders by while Interstate 84 runs along the riverside below. Farther east, the interstate consumed the old road, leaving only fragments recently revived as hiking trails, until the old road resurfaces from Mosier to The Dalles.

Our drive along the Columbia River Gorge

We headed out from our hotel through downtown Troutdale, following the old road as it turned south to follow the eastern shore of the Sandy River. Just before the road turned east to begin its run towards and along the Columbia River, we had breakfast. We pulled into Shirley’s Tippy Canoe, where we were too late for breakfast. So I enjoyed delicious fish and chips while Wendy had a burger that she found too thick for her liking.

From there we headed to Vista House, a fabulous viewpoint above the Columbia River. I forgot to turn off at the Portland Women’s Forum for a great view I’d seen on earlier trips of Vista House above the river, but Wendy was still struck by the appearance of the house when we reached its perch 733 feet above the Columbia. The architect, Edgar M. Lazarus, called it “a temple to the natural beauty of the Gorge”. We stopped and looked around inside and up on the viewing deck.

Our next stop was Bridal Veil Falls, a spot I had previously visited a decade before. We parked at the busy lot and walked the trail over to the falls. A steady stream of tourists walked along the creek and were enjoying the view of the double falls, with some gathered at its base and venturing into the pool. We took a selfie, I shot some video, and Wendy enjoyed looking at the rocks.

Multnomah Falls, the most famous waterfall along the highway, was only three miles eastward. Soon after leaving Bridal Veil we hit a traffic jam on the two-lane highway. We crawled for the better part of an hour along the road to finally reach Multnomah, which was completely overrun with holiday tourists. Some folks disregarded warning signs and walked beside the creeping cars with little room for error. One silly lady almost stuck her head in the passenger window of our car as she yelled, “Hi!” Wendy and I were unimpressed.

When we finally reached the falls, we weren’t interested in joining the throng, so Wendy just snapped a photo as we passed by. I’d hiked up to the famous bridge on a previous visit and remembered how crowded the trail was back then; there were even more people present this time around. Soon after passing through the parking area we finally cleared the jam. At Dodson this segment of the old highway was consumed into Interstate 84.

Before reaching Hood River, we turned off the interstate to see Mitchell Point. Before the scenic road was destroyed, there was a tunnel here with many windows looking out over the Columbia. The rock here is very fragmented and unstable, so it is not too surprising that the tunnel did not last. We raced along to Hood River, where we turned off the road and headed south to a spot I hadn’t visited before: Panorama Point County Park and Viewpoint. From there we could view 15,000 acres of orchards and vineyards as we gazed south towards Mount Hood. 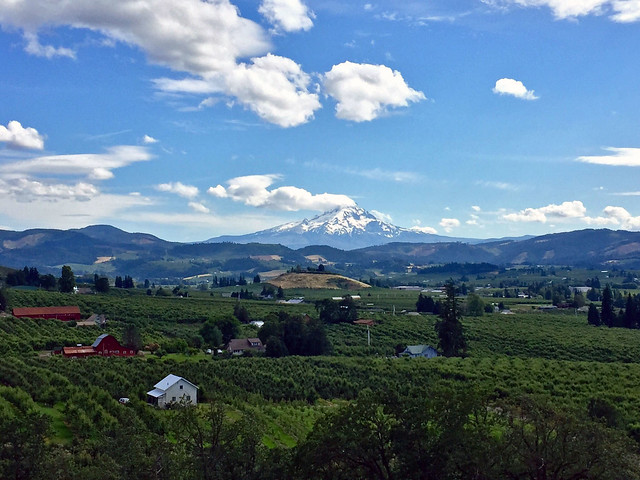 Mount Hood and nearby orchards from the Old Dalles Road 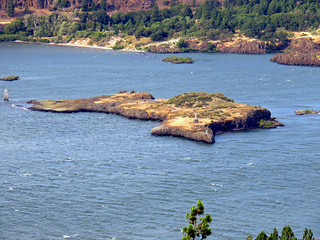 Island of the Dead

At Mosier we were able to get back on the historic scenic road for the drive east to Rowena and The Dalles. We stopped at the Memaloose Overlook for another panoramic view of the Columbia. Below and east in the river was Memaloose Island, one of several “islands of the dead” once found in the Columbia. At one time, the Native Americans here did not bury their dead. Instead they wrapped them in robes or mats and deposited them in canoes which were placed in the woods, on rocky points, or in cedar vaults on islands like Memaloose. The word is derived from the Chinook memalust which means “to die”, although Lewis and Clark named it Sepulcher Island in 1805 and visited it in 1806. The only visible monument on the island marks the grave of Victor Trevitt, a pioneer printer, businessman, legislator, and friend of the Indians. He asked to be buried here among them. When the Bonneville Dam flooded the area in the 1930s, the Indian graves were relocated. So today only Victor’s grave remains.

Our last scenic stop was Rowena Crest for a wonderful view of the Columbia. I love the golden color of the hills on the north side of the river there as one leaves the coastal greenery and enters the rain shadow of the Cascade Mountains. It is striking to see in satellite views of Oregon the division between the wet lands west of the mountains and the dry lands to the east. The little town of Lyle, Washington is nestled there on the north side of the river along the Klickitat River. On either side are the tall vertical cliffs the Columbia River gouged through the Rowena Gap basalts via periodic and catastrophic Missoula floods at the end of the last ice age. 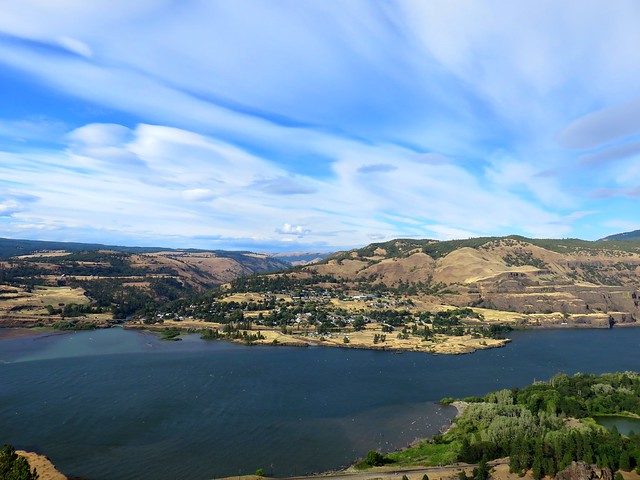 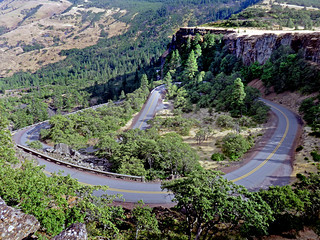 The unrealized engineer in me marveled at the Rowena Loops just below the crest. Engineer Samuel Lancaster originally designed the Columbia River Highway to have maximum grades of 5% and gentle curves with radii of 200 feet or more. J.H. Scott followed that design principle when laying out the road at Rowena, using multiple winding curves to negotiate the route down from Rowena Crest to the river. The road looks like a snake twisting in on itself, but the drive is quite pleasant.

We ended our journey east in The Dalles at Cousins’ Restaurant. I enjoyed some down home turkey and dressing, but Wendy found her pot roast was a bit dry.

Our return to Troutdale was a dash down I-84 for our final night at the Cascades Inn. The next day we would make our way to the coast to visit Cannon Beach and Seaside.