Frankly, I never thought it would take me over six months to finish the posts about our honeymoon, but this school year has been a doozy for both Wendy and me. I’m juggling a lot of balls as I wrap up my final year of teaching and transition into running district communications and technology, and Wendy has had a challenging final year of teaching in special education. So it’s been nice to take a break from our endless work tasks to look at photos and share memories from our honeymoon adventure in the Pacific Northwest. Here’s the final honeymoon post:

We spent part of our last day in Victoria at the Laundrolounge a few blocks from hotel. Perhaps we were preparing for our return home to domesticity after our long adventure in the Pacific Northwest. 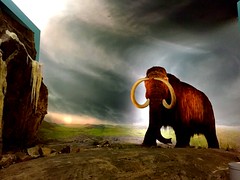 I wanted Wendy to see the fun natural history dioramas and spooky First Peoples Galleries at the Royal British Columbia Museum. The big mammoth I remembered was there, along with a huge model of the dreaded Pine Beetle that has devastated forests in Colorado and elsewhere. A special exhibit was Lyuba, a 40,000-year-old baby woolly mammoth, the best-preserved specimen in existence. Found by a reindeer herder in frozen Siberia in 2007, the animal was about 30 days old when she suffocated after being trapped in mud along a riverbank. It was amazing to gaze upon her flesh 40,000 years later, over seven times longer than written human history. 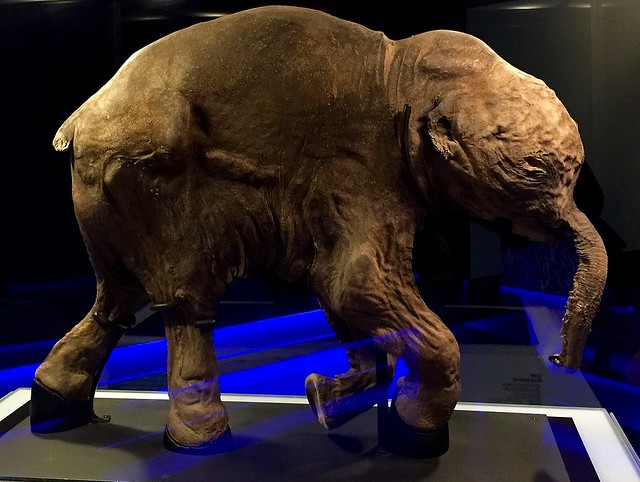 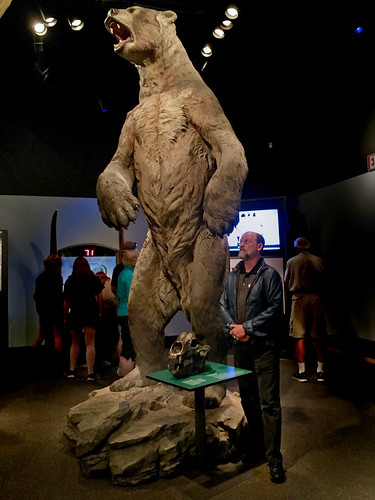 Granger and the Great Bear

I posed by a very intimidating bear, while Wendy braved the silent roar of a sabre tooth tiger. I especially enjoyed revisiting the Old Town exhibit, which is much like Prosperity Junction in the old Cowboy Hall of Fame in Oklahoma City.

We walked back to our lovely room at the Magnolia for our final night in Canada, knowing we would have to catch the ferry back to Washington state the next morning.

Wendy had done her research for this second crossing, doubling up on the Dramamine and staying up top where she could watch the passing scenery. The water was calm as we thrummed away from Victoria. The stark view of the strait through the windscreen on the sparsely populated top deck after we lost sight of land reminded me of an Edward Hopper painting. I deliberately framed it with part of a fellow traveler’s arm in the shot to give a touch of humanity to the scene. 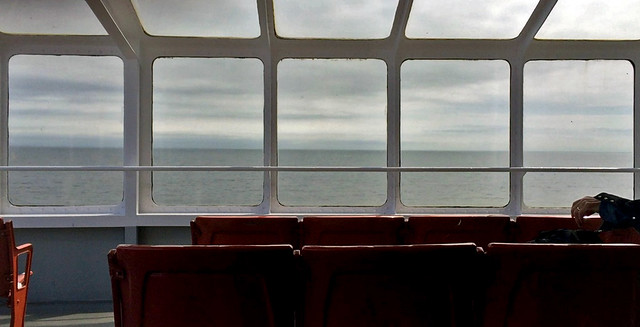 If Hopper had painted a ferry ride…

The calm gave way to choppy swells. The ferry heaved and rolled, turning westward to dodge the worst of the waves. The detour lengthened our journey back to Port Angeles, making for a long and sometimes violent ride across the rough sea. I worried that the rollicking boat ride would make Wendy miserable, but her strategies paid off and she did swell despite the swells. That reassured us that she need not dread ferry rides in the Pacific Northwest in future years.

We were both thankful and hungry when we reached Port Angeles. I drove to the nearby Chestnut Cottage Restaurant for a late lunch. My Goldminer roast beef sandwich was quite good, and Wendy enjoyed her ciabatta club sandwich with turkey, bacon, tomato, Swiss cheese, and delicious Italian dressing. We waited awhile for our food, so I mapped our car journey to reach the Seattle-Tacoma airport for our flight home on the following day.

I did not want to make the loop around the Hood Canal (which is actually a natural fjord created by the Vashon Glacier 10,000 years ago). Neither of us wanted to ride another ferry at Bainbridge Island, so I decided we’d take the long bridge on highway 104 across the Hood Canal to Port Gamble and gambol our way south through Tacoma and back up to SeaTac.

But while devising our route, I noticed a topographic pimple about 20 miles south of the highway 104 fork, with a road winding its way to the top. A web search told me there were north and south viewpoints there from atop Mount Walker, about 2600 feet above the surrounding countryside and 2800 feet above the Canal. Mister Panorama could not resist that!

So we drove around the northeast corner of the Olympic Peninsula, did NOT take the fork in the road, and headed up Mount Walker. We passed a rockfall before the road turned to miles of gravel as we ground our way to the summit. There were fellow tourists at each viewpoint, with the one to the south affording a nice view of the Hood Canal. Through the haze we could barely see the skyscrapers of Seattle, one of the places I’ll share with Wendy on a future visit. 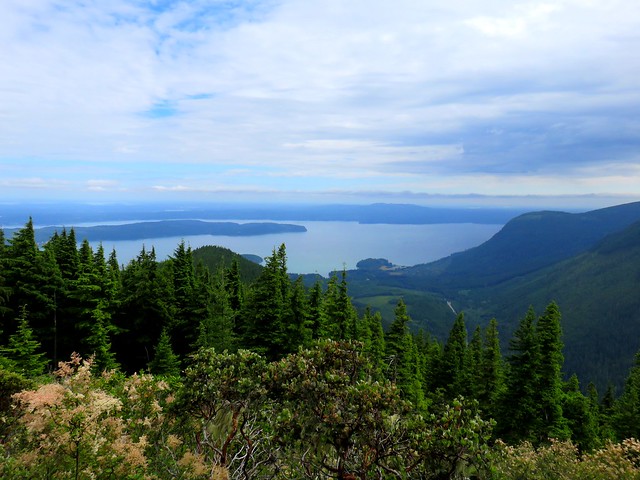 We passed under enormous trees on our way to the north end, where we could see Quilcene Bay, separated from Dabob Bay by the Bolton Peninsula.

The rest of our trip to SeaTac was uneventful, and we were tired and worn out as we pulled into the Coast Gateway Hotel for the night. I was too pooped to drive any more, so we were glad to find Sharps RoastHouse conveniently parked in the hotel lot. It wasn’t fast, and the meat was a bit dry, but we wolfed down our food and collapsed back at the hotel to rest before our late morning flight back to Oklahoma City.

The car rental return was as confusing and frustrating as ever at SeaTac, and I was quite annoyed by how the shysters at Hertz failed to honor some of the discounts I had arranged. I will look elsewhere for future rentals.

The flight home was a direct one back to Oklahoma City. We again flew first class, in larger and more comfortable seats but in a smaller plane than what I grew used to in the 1990s and 2000s. My folks picked us up at Will Rogers World Airport and by Monday, July 18 we were back in Bartlesville for the first time in 18 days.

Before we had left, Betty Henderson had arranged for the purchase of a new portable building, funded by her and other friends. Betty and I had picked it up from Costco in Tulsa back in June, leaving the huge boxes in the garage at Meador Manor. Wendy and I returned home to find the portable building assembled on a new platform in the yard, thanks to the skilled efforts of John, Betty’s husband, who has graciously helped us with several home improvement projects. After we got our bearings, Wendy and I would host an informal cookout at a shelter at Lake Copan for them and other dear friends. That’s as close to a wedding reception as we wanted to get. 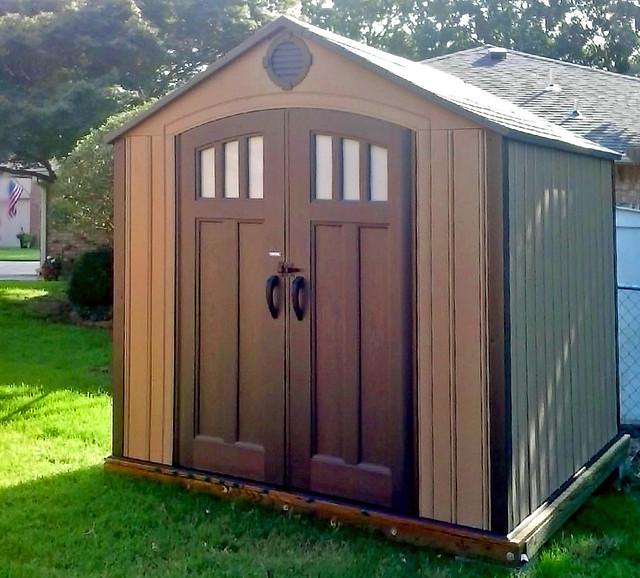 John Henderson built this  building for us, which dear friends chipped in to purchase

Non-stop school work resumed as soon as we arrived home and continued on into 2017. But when we paused and reflected on our favorite experiences from the trip, Wendy recalled seeing all of the roses, collecting rocks, the Magnolia Hotel and spa, and the excellent salmon at several restaurants plus some great blueberry pie in Portland. She noted how the alcohol inks she picked up in Astoria, after seeing a Facebook video on making decorative tiles, started a long exploration of the craft.

Varied transportation was another highlight for Wendy. Even though the first ferry ride was miserable for her and the second one was violent, she found it a new and exciting experience. The plane rides were fun too; she said sleeping on the planes gave her some of the best sleep she ever got, and she marveled at seeing Mount Hood from the air during the golden hour as we landed in Portland. And she loved tracking the huge cargo vessels on her iPad and iPhone during our stay in Astoria.

Highlights for me included the windy but beautiful Loowit Viewpoint at Mt. St. Helens, Wendy giggling as she crafted a photo of me as Carmen Miranda, the forest pullout at La Poel, the orchards arranged before Mount Hood at Panorama Point, and Wendy joyfully scouring Ruby Beach for rocks.

We have many more shared adventures ahead of us, and look forward to sharing them with our gentle readers as well.