Treasures in my net

Posted on December 8, 2018 by Granger Meador

When I cast my net out into the world wide web, sometimes I see the welcome gleam of bits of treasure amidst the accumulated flotsam and jetsam. Facebook and other social media are polluted by poisonous politics, but even there one can find safe harbors maintained by gracious caretakers. One person’s treasure is another’s trash, but here is a sampling of items I recently found online that brought me happiness.

A Sooner High that never was

Local nostalgia author Rita Thurman Barnes, who currently writes for Bartlesville Monthly,  helps folks stay positive in her latest curated Facebook group, Once Upon a Time in Bartlesville. My interest in local history ensures I scan it regularly for interesting tidbits new to me. Over the years I’ve compiled information on our local school facilities, which I organized into a District History section at the district website. But in all my rummaging through library vertical files and the disorganized filing cabinets I inherited in my district office, I had never come across any promotional material on the effort to build Bartlesville’s Sooner High in the 1960s.

So I was fascinated when Rita posted a handout sent to parents of Southview Elementary students in 1964 to promote the bond issue that built Sooner High. Take a look at the architects’ rendering:

For those familiar with Bartlesville’s Sooner High, which later became the Mid-High and has now become the replacement Madison Middle School, this is a glimpse into an alternate reality. When the school opened in 1966, the curving auditorium wall in the initial rendering had become a stepped series of straight walls, the large areas in the rear had changed, and the T-shaped classroom wing had transformed into two shorter and separate east-west wings. A one-story addition extended the south wing in 1980, a two-story addition extended the north one in 1999, and a single-story 2009 addition connected them to form a fully enclosed courtyard. 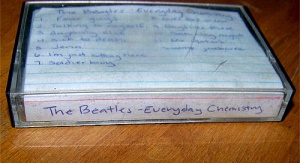 Speaking of alternate realities, another bit of treasure in my net came from a transdimensional thief who snatched a cassette tape of songs crafted by The Beatles after 1970. Say what? Granted, they did release two new singles in the mid-1990s based on some old demos by John Lennon, but this tape had 11 songs I’d never heard of.

Despite its entertaining backstory, this is really a beautifully crafted mashup of songs from the solo careers of the members of The Beatles after they broke up. The human miracle that is Wikipedia has documented what went into the pot to form this stew.

Modern technology has enabled depressing public displays of widespread intolerance, ignorance, and bigotry. But it has also unleashed incredible amounts of remix creativity.

Apropos of alternate Beatles, my financial support for Longreads surfaced for me a Ledger Note article about Klaatu, a Canadian band which was briefly mistaken for The Beatles in 1976. I was intrigued enough to stream their initial album, 3:47 EST, and could certainly see why folks wondered if Paul McCartney, John Lennon, George Harrison, and Ringo Starr might have reunited.

It turned out instead to be the work of John Woloschuk, Dee Long, and Terry Draper. I wasn’t all that thrilled by the first song, Calling Occupants of Interplanetary Craft, which I was familiar with as a strange cover by The Carpenters. But I persevered, if only to hear what in the world a song titled Anus of Uranus might have in store. Those who didn’t get their fill of briny Beatles from Yellow Submarine, Octopus’s Garden, and McCartney’s Admiral Halsey might enjoy the over-the-top Sir Bodsworth Rugglesby III, but I prefer Sub-Rosa Subway.

A final treasure of late has been an excerpt from Nina Paley‘s latest movie. Almost a decade ago, I posted about her delightful Sita Sings the Blues, which she released into the public domain. Her creative and exacting animation told the story of the Indian epic the Ramayana with the help of 1920s torch songs by Annette Hanshaw.  I urge you to give it a try.

Recently YouTube offered up to me Death of the Firstborn Egyptians. What the heck? But I instantly recognized Nina’s incredible animation style, coupled this time to two songs from the “Spider Suite” by The Duke of Uke and His Novelty Orchestra.

Wow…she continues to amaze me with her artistry and expertise in combining disparate elements to retell ancient stories. This comes from Nina’s new film, Sedermasochism. It is described thusly:

Loosely following a traditional Passover Seder, events from the Book of Exodus are retold by Moses, Aharon, the Angel of Death, Jesus, and the director’s own father. But there’s another side to this story: that of the Goddess, humankind’s original deity. Seder-Masochism resurrects the Great Mother in a tragic struggle against the forces of Patriarchy.

After the movie makes the rounds of the various film festivals, I gather Nina will release it for the rest of us. That day my net will be heavy, filled with a great treasure for me to enjoy for years to come.

When winter weather drives you indoors and you pick up a device to cast your net upon the waters of the internet, may you find your own treasures amidst the dross.

I enjoy day hikes, photography, podcasts, reading, web design, and technology. My wife Wendy and I work in the Bartlesville Public Schools in northeast Oklahoma, but this blog is outside the scope of our employment.
View all posts by Granger Meador →
This entry was posted in history, movie, music. Bookmark the permalink.