Autumn 2019 ends next week, prompting this overview of our trips of the season: a visit to Crystal Bridges over Fall Break, a stay at a cabin in Broken Bow over Thanksgiving, and a quick dash to Fayetteville in early December.

During the Fall Break in October, Wendy and I returned to Crystal Bridges Museum in Bentonville, Arkansas. The attraction was a Crystals in Art: Ancient to Today exhibit. Regular readers will know that when we are out on the trails, I’m always climbing to vistas while Wendy has her eyes on the trail to spot crystalline rocks.

The interesting thing about ancient crystal art is its timeless appearance. Unless pieces are mounted in metal with a patina or suffer chips and other damage, the layperson can’t distinguish something manufactured by a Roman artist over a millennium or two ago from something crafted recently. None of the ancient artifacts made much of an impression on me. Some of the modern items, however, more than made up for it.

In 2004 former NASA aerospace engineer Frederick Eversley casted Blue Para, a polyester parabolic lens. I used to teach physics students how spherical lenses and mirrors can focus incoming light towards an area but suffer from smearing through aberration, while parabolic optics can focus light to a pinpoint. As displayed, one could see chromatic aberration around the edges of the light cone striking the stand. 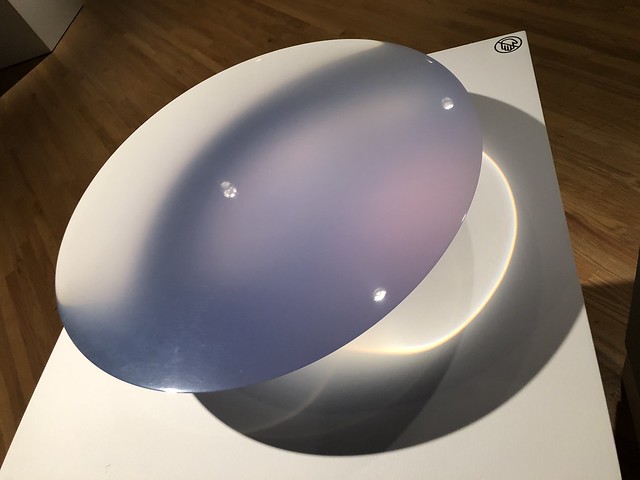 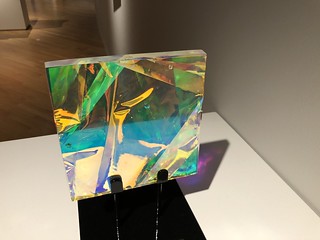 In 2019 Alexis Arnold created Untitled (Chromalith II) out of epoxy resin and dichroic film, although the exhibition wall plate misspelled it as dichoric. The thin films create reflections off their front and back surfaces, with wave interference separating white light into interesting colors. That made her piece more interactive, with shifting interference patterns depending on the angle of view, and a stark contrast between the reflections one sees off the piece itself versus the reflection off the stand of the light making it through the layers of film.

Alexis found some boxes of discarded books in her neighborhood and was inspired to turn them into beautifully odd crystal sculptures by treating them with borax. It was fitting that the exhibit featured field guides to rocks and minerals that she has transformed. 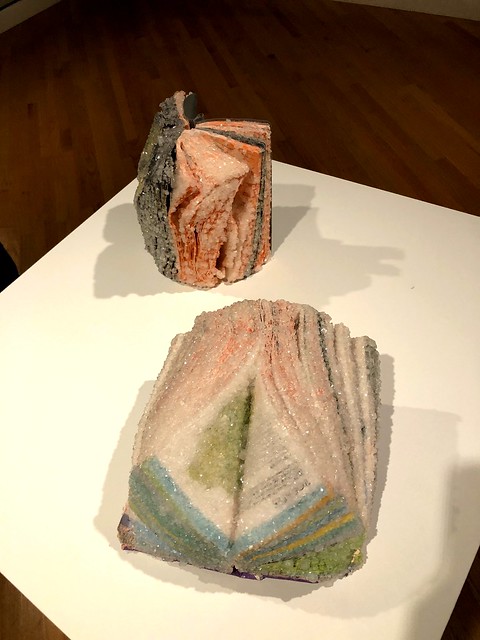 In 2018, Gisela Colon blow-molded acrylic into Morph (Iridescent Platinum) which also changes its appearance depending on one’s viewpoint. 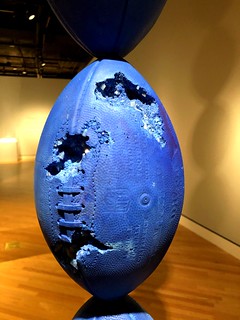 The exhibit included several works by Daniel Arsham which both Wendy and I found particularly intriguing. He says he creates “fictional archaeology” in his works which draw from pop culture, architecture, and geological forms.

Arsham created familiar sports objects out of blue calcite crystal and hydrostone. There was a column of crystalline blue footballs, with your eye caught both by the familiar exterior texture and the unexpected crystalline structure beneath.

His Blue Calcite Boxing Set was fascinating in how the fabric trunks were rendered in hard crystals, complete with pleated waistband. His deliberately damaged castings seem to me like a blend of the ruins of Pompeii with petrified wood. His choice of monochrome is evidently influenced by his color blindness. I’d love to see more of his work. 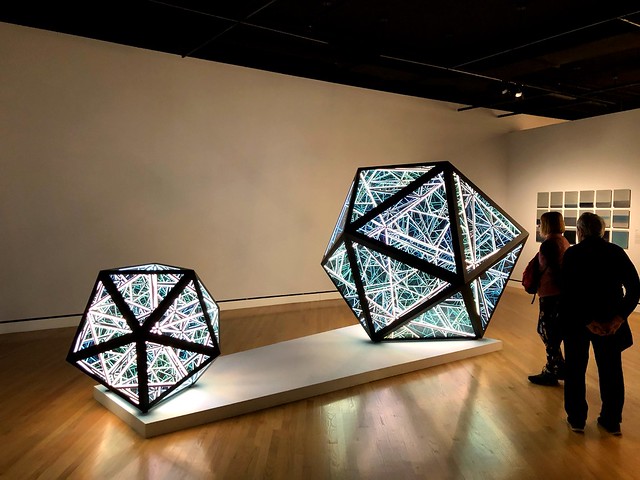 The highlight of the show for me was the Portal Icosahedrons by Anthony James. He created the 20-faced and 30-edged polyhedrons out of steel and glass with LED lights, lining them with half-silvered mirrors. Their scale and being able to view them from all angles was stunning, going beyond a similar two-dimensional work at the Nelson Atkins Museum in Kansas City or similar but small pieces we would see a couple of months later at Art Ventures NWA in Fayetteville.

I’m glad there was a smaller polyhedron alongside the massive one, since that allowed me to peer down from the top while also peering easily into panes to partake of complex reflections from varying angles.

Wendy particularly liked Miya Ando’s Tides, a 2011 assembly of aluminum plates which had been anodized by submerging them in an electrochemical bath and plating them with sapphire crystals, then washing them and mixing in colors, finally placing the plates in a tub of boiling liquid to encase the crystals and dye in the aluminum. The assembly invites you to align yourself, pause, and contemplate. They remind me of a calm ocean at different times of day and night. 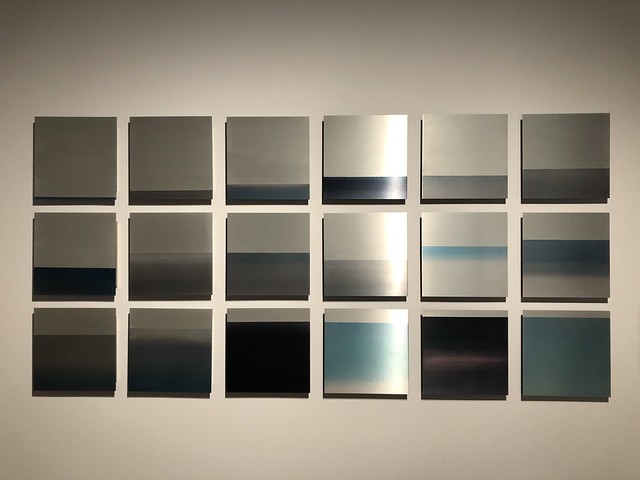 Your Luna Nebula by Ólafur Elíasson has partially-silvered crystal spheres which provide an inverted reflection of yourself upon close inspection, but resolve into what might be droplets of water or a starry nebula with distance. I had fun capturing another patron taking a shot of that work with her phone from a vantage point behind another crystal artwork. 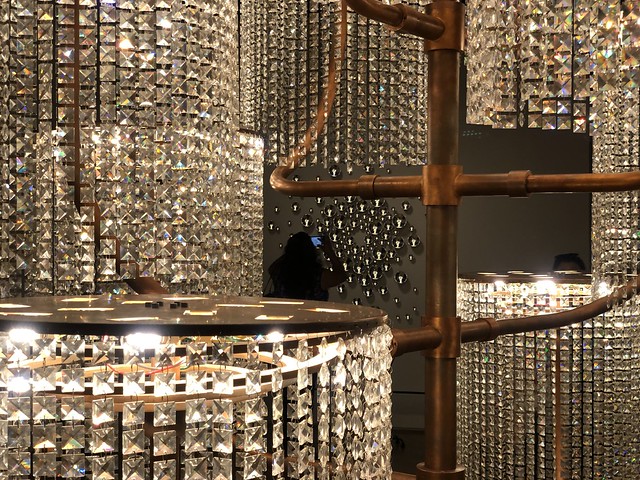 It was a beautiful autumn day outside, and we strolled the grounds. We walked over to the Bachman-Wilson house by Frank Lloyd Wright, but hadn’t purchased tickets for a tour. Knowing Wendy is less interested in Wright houses than I am, I opted to save that for a future visit. 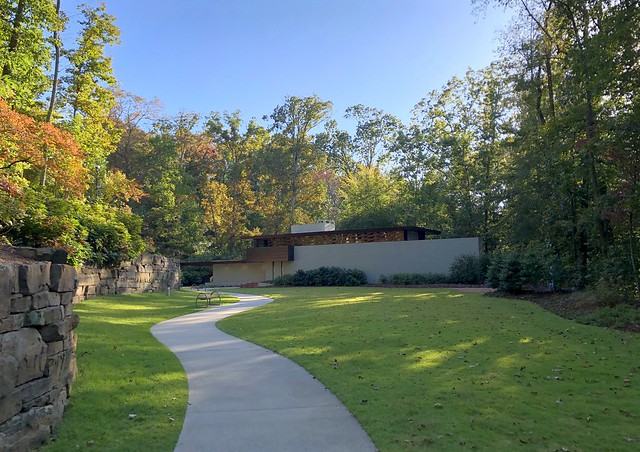 After Fall Break, Wendy and I took advantage of the fall weather to take a couple of short weekend hikes on the Cabin Loop at Osage Hills and the north end of Table Mound at Elk City Reservoir. Another weekend found me trekking around the Lake Loop at Osage Hills. I also enjoyed weekend walks on the Pathfinder Parkway, including a photogenic walk at the Paul Hefty Bird Sanctuary.

Friends of the Parks provides this context:

The Robinwood Park Bird Sanctuary was originated by Paul Hefty in 1977, with approval from the City. From 5 acres of the existing Robinwood Park, Paul transformed forest land into a bird paradise by planting many appropriate food bearing bushes and trees, including deciduous holly, special flowering crabs and berry bushes, plus hickorys, pecans, oaks and walnuts. Over the years he incorporated many types of protective brush for the birds. A wide variety of birds reside here both winter and summer. Paul died in 2008. 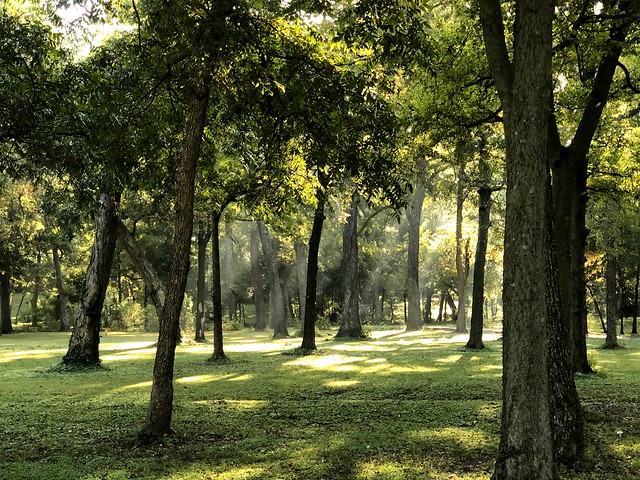 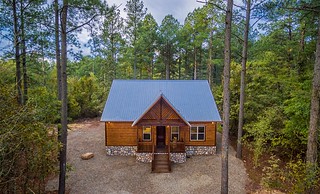 Our cabin at Hochatown

Over Thanksgiving, I rented a cabin at Hochatown in far southeastern Oklahoma. I’d hiked the David Boren Trail at Broken Bow a decade earlier on a hot September day. Thanksgiving would be much colder, but I figured I might lure Wendy out for a hike to a vista I dimly recalled over Mountain Fork River. 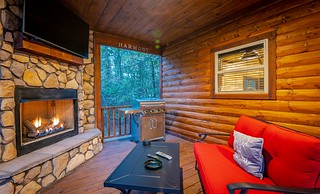 Our cabin’s comfortable back porch

Our cabin was quite new, having only hosted a few previous visitors. Its best features for us included a gas-fired fireplace and grill on a big back porch, a spacious his-and-hers bathroom combination with tub and shower, and modern stove and oven. The cabin was roomy and airy, but we wished that it had more floor or table lamps and dimmable lights, and the bed wasn’t the most comfortable for sleeping.

After a rainy and overcast five hours of travel south to our cabin, the next day was partly cloudy. We enjoyed a tasty lunch at Steven’s Gap Restaurant, but Wendy had come down with a bad cold, so I limited our outing to the shortest loop to the vista, with us hiking a total of one mile from the Dogwood Campground up to the overlook and back down. I’d researched the route and knew to travel clockwise so we could make our way up the hill via switchbacks and then return down a long steeper descent.

It was late for autumn leaves, and the weather pattern this year muted the colors, but the panorama was there as remembered, along with a view down the river.

Thanksgiving Day was overcast with rain, but we had gone shopping in Broken Bow after our hike the previous day. So we enjoyed a hot breakfast with biscuits, bacon, and eggs. I was able to grill us steaks on the back porch, and Wendy prepared baked potatoes in the oven for our main holiday meal.

The next day we indulged in some more pie from Steven’s Gap Restaurant before making our way home. I made a quick dash to visit my folks for a belated Thanksgiving meal in Oklahoma City, with Wendy staying home to be certain her cold wasn’t shared with others. I made sure to bring back to Wendy a salmon patty so that she could participate in our family’s odd Thanksgiving tradition that evolved from my mother’s dislike for turkey and my love of salmon patties!

A Rainbow in Fayetteville 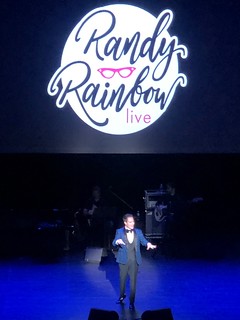 In early December we made a dash over to Fayetteville, Arkansas to see Randy Rainbow’s live show. He is a YouTube star who does funny musical parodies targeting a particular pompous politician. The show was fun and brought some much-needed humor to this season of impeachment hearings and poisonous politics. 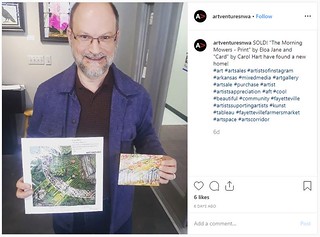 Before returning to Bartlesville, we stopped in at Art Ventures NWA to see a series of galleries filled with a diverse body of artworks for sale. None of the artists were at work during our visit, but we enjoyed the wide variety of work. I became a snapshot on their Instagram account when I purchased a card by Carol Hart and a print of The Kind Mowers by Eloa Jane.

Eloa had moved to America and been struck by the amount of junk mail filling her mailbox. She decided to use its varied textures, patterns, text, and colors as a means of self expression, rolling pages of magazines, phonebooks, and other items individually into small tubes. Then hundreds or sometimes thousands of the paper tubes are assembled to create decorative vases, sculptures and wall art. 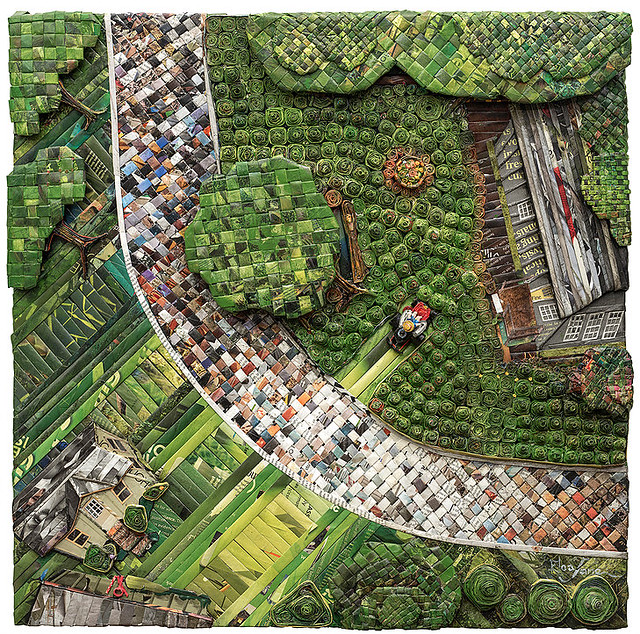 So we’ve had a good autumn. Now, with the air turning nippy, we plan to venture to Santa Fe, New Mexico over Winter Break. Wendy loves the town and its food, and neither of us has ever been there other than in summer. We’ll be bundling up to prepare for some very cold nights on the high desert or, to be more precise, on what the Köppen Climate Classification System designates as a “semi-arid steppe with cold winters” — brrrrr!