A new loop at Lookout Lake

The cooler weather drew Wendy and I out for a short hike this weekend. I had first considered going to Elk City, but there were activities there associated with the annual Neewollah festival in nearby Independence. We wanted some solitude, so I instead set course for Osage Hills, which is a short drive west of Bartlesville.

We drove west on US 60 to turn south at the park entrance onto OK 35, which used to be the shortest highway in Oklahoma. It runs about two miles to the park. Today, however, I found out that it has lost that distinction. Now there is a bizarre highway 40A connecting US 177 to Carney, Oklahoma north of Chandler, which is only 0.35 miles long. 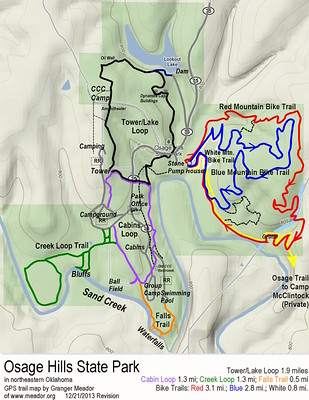 Due to recent improvements, I will need to update my Osage Hills trail map.

The park has had several recent improvements, including updated signage. I was glad to see a large sign to help people know about and locate the mountain bike trails. They have never been shown on the outdated online trail map, which led me to create my own map years ago. It has been eight years since I had to update my map, but I found out on this visit that an update is needed. More on that in a bit.

I’d seen on the park’s Facebook page that the old restrooms near the park office had been demolished and replaced with pre-fab units. There are two identical buildings by the office. Each building has a couple of single unisex toilets and a couple of showers. They are a very nice upgrade, offering privacy as well as comfort and convenience. Each building has a mini-split unit providing air conditioning and heating, so they will be open year-round! There are some by the park office, down in the recreational vehicle area, in the picnic area, and up on tent hill. 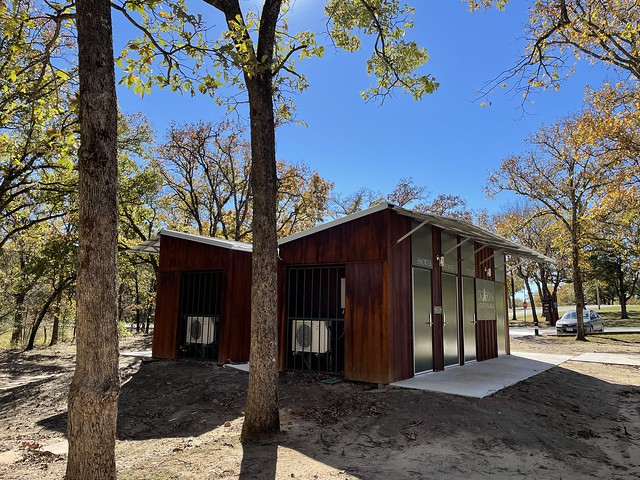 I was glad to see that the park still had the old pay phone by the restrooms at the office. That is a nice service to still offer to folks who do not have a cell phone or cannot get a signal at the park. I wasn’t surprised to see a couple gawking at it and picking up the receiver to play with it, as in my lifetime they went from being ubiquitous to become rare relics.

The state has never funded its state parks well, and finally resorted to parking fees over a year ago. Now you are supposed to pay to park, with rates that vary by the number of days and if your vehicle has an Oklahoma or tribal license plate. I just pay an annual fee of $60 ($75 if you don’t have an Oklahoma or tribal plate) for unlimited use of any of the state parks in my Camry. I also support the parks via my State Parks Supporter – Pavilion license plate, which cost me $40 new and $36.55 annually. Hopefully at least some of that trickles down to Osage Hills. 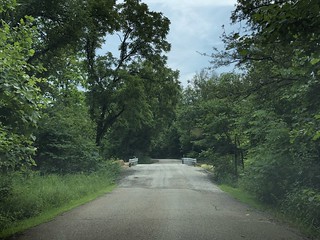 The new bridge on the Lookout Lake Road

I knew there had been an organized hike earlier in the day on the Creek loop. After our potty break, we avoided that area and instead drove back to take the short road to Lookout Lake. We crossed the bridge that was the Eagle Scout project of Wendy’s former student, Kenneth Standish, Jr., and parked by the dam.

The park has added some kayaks and canoes along with the old metal boat one can take out onto the tiny lake. A couple of people were out in some kayaks as we began our walk along the branch trail from the dam up to the lake/tower loop. That trail segment was a bit rough. Winds had recently scattered branches across it, and it was clear that the trail is not heavily traveled.

We soon climbed to the main trail and I realized the sign indicating where you can descend onto the branch trail to the dam was missing. No wonder that little segment is not being used much. Hopefully in the ongoing improvements they will have new signage at both ends of the little branch trail to clue people in. 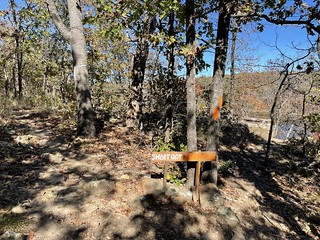 We headed west above the south shore of the lake. We noticed big bright new orange trail blazes along the way. At a waterway, I was puzzled to see the trail continue on a bit to the northwest. What was happening? Soon I saw a trail blaze indicating a turn – a level of sophistication rarely seen on the trails at the park, and a sign about the fork in the new trail. We could turn left for the short way or descend to the right towards the lake. I dimly recalled seeing a post by fellow educator Shelly Buhlinger that her husband, Scott, and his trail steward friends had been working on the trails. But I didn’t realize that included creating a new loop. How exciting!

Years ago I bushwhacked my way entirely around the lake just for the heck of it. I knew the park boundaries allowed for a bit of trail west of the lake, but it couldn’t go too far. Soon we reached another hillside waterway above the shallow end of the little lake’s western arm. I took a panorama of the new trail crossing the waterway and the previously obscure part of the lake.

Panorama along the new loop

It was a real treat to see previously hidden areas of the park along a new well-blazed trail. Eventually, as I had figured, the trail turned left to head back south. I would have been surprised if they had looped around the lake. It was nice to go through the woods north of the old CCC camp’s location. 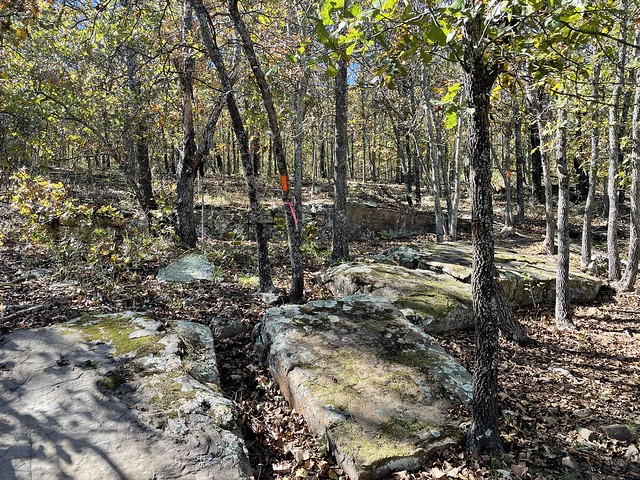 Soon we reached another junction. We could have turned south toward the old CCC camp, but as this was our first hike in a long time, I opted to take the “short way down” back to the lake to return to our car. I also wanted to map that bit with my iPhone’s Gaia GPS app. The entire hike was only a bit over a mile, but seemed longer given the unfamiliarity with the new loop.

Soon I’ll have to return to the park to follow the entire Tower/Lake Trail loop to track any other changes and note the mileage. Then I can update my trail map. I surely do appreciate the hard work being done to maintain and extend the trail system. Getting out to walk along the Pathfinder Parkway in Bartlesville has been important for my mental health throughout the pandemic, and I look forward to more brief trips in the coming months to Osage Hills to enjoy the improvements out there.

I enjoy day hikes, photography, podcasts, reading, web design, and technology. My wife Wendy and I work in the Bartlesville Public Schools in northeast Oklahoma, but this blog is outside the scope of our employment.
View all posts by Granger Meador →
This entry was posted in day hike, photos. Bookmark the permalink.