Superheroes Past and Present

I wasn’t a big comic book collector, but I did read DC 3-packs in the early to mid-1970s. Marvel comics never caught on with me – their artwork seemed cruder to my eyes and I didn’t care for all of the bickering and angst amongst its characters…too much drama!

The front and back books of my DC 3-packs were usually Justice League of America and Action or Detective Comics (aka Superman or Batman) while the middle would be some lesser title like Superboy or Green Lantern/Green Arrow. Since I only had a couple dozen or so comic books in all, I read and re-read some of those comics again and again, enough that images from several of the stories lingered over thirty-five years later.

My comic books were discarded decades ago, and although I would sometimes wish I’d kept Dagger in the Sky and other tales, I presumed I’d never see them again. Comics were printed on cheap paper and how could you possibly sift through the hundreds of titles at a comic book shop and hope to find the few you fondly remembered?

Well, the internet puts everything at your fingertips these days. Online databases let you see the covers from any mainstream comic book and you can then use that info to track down a digital download. Recently I’ve re-acquired a number of titles from my youth and enjoyed revisiting their artwork, if not their juvenile storylines.

You can click on any of the images here to enlarge them.

Memorable images from my youth

Dagger in the Sky from 1972’s Superman #256 was the story I remembered best. I was always struck by that plane-shaped hole ripped through the fabric of spacetime.

And the dramatic take-off of the jet from the hanger lingered in my mind’s eye as well. I loved Superman stories where he used his brains as well as his brawn, since Superman was enough of a deus ex machina himself without needing silly assistance from robot Supermen and other junk from his Fortress of Solitude. I disliked stories involving kryptonite, especially the many weird variations, and despaired when Mr. Mxyzptlk would make another annoying appearance. Gosh, did I really like Superman? Doesn’t sound like it, does it?

The next month brought Detective Comics #428 with a dramatic first-person shooter cover. But I was never as fond of Batman as I was of Superman. I loved the campy Batman TV show, but the comics of the 1970s were a very different take on the caped crusader. They were dark and seething with rage, although not as down and dirty as Frank Miller’s influential 1986 The Dark Knight Returns, which truly isn’t my cup of tea in storyline or artwork. And while I liked the first of the Tim Burton Batman movies, they went downhill fast. The new Christian Bale movies are better, but are also quite grim.

A noirish Hawkman caper I liked

That same 1972 issue of Detective Comics had a moody noir-style Hawkman story which I liked for its somber atmosphere. I never read much of Hawkman, but that particular short tale stuck in my mind.

I always preferred Justice League of America stories to the comics dedicated to a single character. They had more variation in style and content. I was no doubt influenced by the Super Friends television show, and Wonder Woman in the comic books was a far more interesting female character than anyone in the sappy Superman Family comics, even if she was rather dull in Super Friends.

Wonder Woman was the brainchild of William Moulton Marston, a Harvard-educated psychologist and lawyer and inventor of the lie detector. That explains the magic lasso’s truth-telling power, but Charles Lyons points out that “Marston filled his stories with bondage (both male and female), spanking, sorority initiation rituals, cross-dressing, infantilism, and playful domination.”

Wonder Woman in a typical act of bondage

Lyons offers up a revealing comment by Marston in 1946:

Tell me anybody’s preference in story strips and I’ll tell you his subconscious desires…Superman and the army of male comics characters who resemble him satisfy the simple desire to be stronger and more powerful than anybody else. Wonder Woman satisfies the subconscious, elaborately disguised desire of males to be mastered by a woman who loves them.

Wonder Woman changed styles with the times, starting out with a 40s hairstyle and ruffling skirt which were long gone by the time I read her tales in the 1970s Justice League comics.

But she retained her habit of either getting trussed or chained up herself or gleefully doing it to others.

The most sexualized artwork I read as a kid was, oddly enough, in Superboy. Even at age 9 I could pick up on some of the homo- and hetero-erotic vibes. We all know what those teenage superheroes were really up to, don’t we? The costuming left little to the imagination, for males or females, but as a prepubescent I was no doubt even more distracted by the visual Star Trek references in their spaceships. The female costumes were also a reminder of 1960s Star Trek: the outfits, or lack of them, which Bill Theiss draped over the guest stars.

Your place or mine? 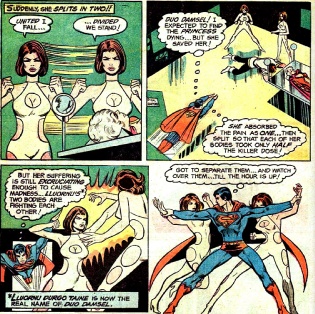 She used too much bleach when washing her costume

Which is stranger: Cosmic Boy's outfit or the junked U.S.S. Enterprise?

The 1970s were part of the Bronze Age of comics. The Golden Age had ended in the 1950s with the attacks by Fred Wertham and the consequent Comics Code. The Silver Age had brought back many superheroes in revamped costumes and modernized origin stories. The Bronze Age I grew up in added more self-consciously darker and “socially relevant” storylines, which did little for me.

I certainly didn’t like all of the parallel worlds that built up in the storylines to explain away various contradictions. Eventually DC had the Crisis storylines of the 1980s which revamped all of the continuity. I wasn’t reading any comics by then, so I missed out on all that. And I also missed out on the switch from mass comic reading by kids to avid collecting by adults. Readership declined but revenue was bolstered by special editions and collectors.

The only time I read any comics after elementary school was when I heard Superman died. I picked up a graphic novel collection of the follow-up storyline of Superman’s return, struggling to decipher its maze of alternate Supermen and the like. It really didn’t seem worth the effort in the end; the artwork was impressive, but the convoluted tales certainly weren’t nostalgic for me, being far removed from what I’d read as a kid.

Some years later I was convinced by a highly positive mention in Time to read the Watchmen graphic novel, which was extremely dark but also a great story. I also read the first Sandman books, but although Gaiman is a great author they got a bit too ethereal for me.

Then DC announced a few months ago that it was completely rebooting its entire line, discarding all of the old continuity and starting fresh. They’d also be offering their new line in iPad-friendly versions with the same kind of auto-panning and zooming that Marvel had in its digital line.

That sounded intriguing since I could just download a few books on my iPad and not have to worry about the overload of ponderous continuity from decades of stories. Two of my favorite television franchises, Dr. Who and Star Trek, suffered from such problems of backstory overload, although I was an avid enough watcher of every Trek series to keep up with the dizzying complexities.

The New 52 at DC has a rather digital look. And Wonder Woman is like money: always inflating.

So I’ve bought and read the first three of the new Action Comics with Superman. He’s weaker than before and in this storyline hasn’t really figured out how to be a superhero yet and is leaping about in jeans, not flying around in full spandex. It’s actually been fun and I’ll keep reading it for awhile until I tire of it.

There is a separate Superman comic book line where it appears he’s older and more polished with more stuff about Krypton, but that doesn’t interest me. And I’ve sampled and rejected The Savage Hawkman and some Marvel comics. I’m just not the target audience for most of this stuff. The fact that I complain more than praise throughout this article is a giveaway that comics really aren’t my thing, although I like bits and pieces.

I’ll wrap up with something interactive you can try if you like. I found a silly online quiz that supposedly identifies which superhero you most resemble in terms of your personality. Here’s what I got:

You are Green Lantern

Well, I never really cared much for Green Lantern (let alone this summer’s movie version which I wasted money on), but I have to admit that while I don’t want to read about it, if I had to live it I’d prefer a magic ring to bare knuckled fisticuffs. And having to keep that darn ring charged up isn’t all that different from keeping the iPhone and iPad ready to go, is it?

I enjoy day hikes, photography, podcasts, reading, web design, and technology. My wife Wendy and I work in the Bartlesville Public Schools in northeast Oklahoma, but this blog is outside the scope of our employment.
View all posts by Granger Meador →
This entry was posted in art, photos, random. Bookmark the permalink.

1 Response to Superheroes Past and Present