Posted on February 8, 2015 by Granger Meador

The first Saturday in early February 2015 was a warm day with a high around 70 degrees Fahrenheit. That convinced Wendy and me to make a 270 mile daytrip to Tenkiller Ferry Lake to hike a couple of short trails on its northern and southern ends. I first visited Lake Tenkiller in quest of hiking trails back in May 2010, only to be rebuffed by the overgrown Gum Springs trail at the eponymous state park and disappointed by the paved trail through the park. Wendy and I visited the area in early November, driving along the northeastern shore of the lake as part of a Tahlequah daytrip, and promised ourselves to return later to hike three short trails scattered along the lake shore. We’d hit two of those three trails on this outing, eager for new trails neither of us had ever hiked. 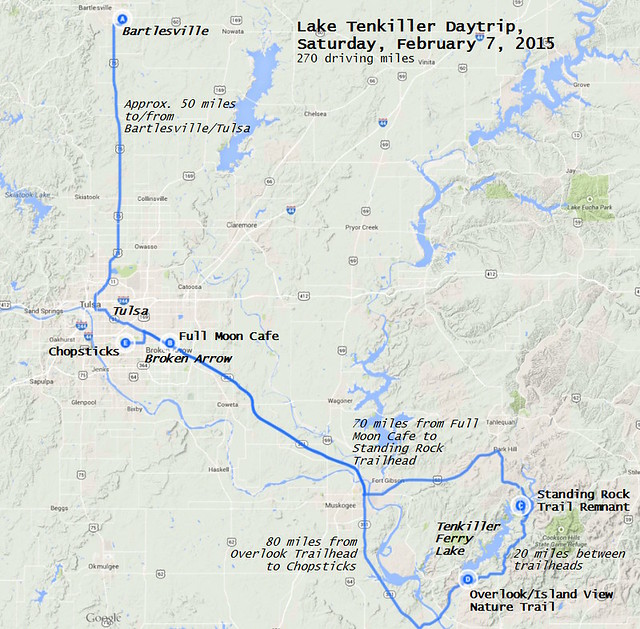 We left Bartlesville around 10 a.m. and stopped 55 miles down the road at the Full Moon Cafe in Broken Arrow for lunch. The food was fine, but the waitress was fairly hopeless. She did offer to compensate with a free dessert, but we passed, not needing an unnecessary dessert to weigh us down on uncertain trails. Another 70 miles of driving took us southeastward down the all-too-familiar but thankfully speedy Muskogee turnpike and across to Lake Tenkiller, passing the enormous Greenleaf Nursery as we wound our way around to the Standing Rock area on the lake’s northeast shore.

Lake nature trails in Oklahoma are often poorly maintained, and Tenkiller is no exception. A 1988 article claims:

Spectacular stone formations, huge boulders and frequent glimpses of the lake can be seen along the 1 1/4-miles Standing Rock Nature Trail. This path is made up of two loops, each with two segments: Big Pine and Three Sisters on the first loop, and Big Cedar and Hi-Knob on the second.

And the Tulsa Audubon Society mentions the Standing Rock Nature Trail trail in its entry on Lake Tenkiller. But Wendy and I found no signs or marked parking areas or trailheads, only a wide spot off the road at its intersection with Whippoorwill, where a freshly bulldozed utility right-of-way led due west down to the lake shore. I found a dim trail leading directly southwest, which was sufficient for us to lace up our boots and head out. We’d only find a trace of the promised trails. 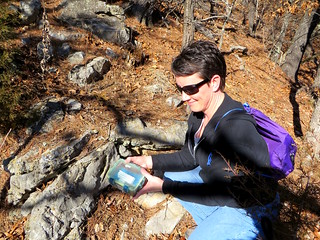 The trail soon led by several large boulders projecting out of the soil; I don’t know if they are the eponymous standing rocks or not. The dim trail led onward, with a view of the lake through the trees, until the trail began a very steep descent to the water. As we carefully made our way down, sharp-eyed Wendy spotted a plastic box tucked under a ledge. It was a geocache; I last stumbled onto one years ago. This one was in good shape, with a notebook to log our visit and various tchotchkes. I deposited a gold dollar, while Wendy donated a little packet of fizzy rocks candy and a DumDum sucker. This cache has been in place since 2007, although its notebook log only had a few entries from recent years. We returned the cache to the ledge and I camouflaged it with some stones and pieces of bark. 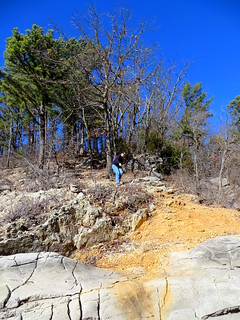 It was treacherous making our way down the eroded bluff to the shoreline, and I slid partway and Wendy skinned up one hand on an unexpected slide. As we were bandaging her hand, the wind blew off my hat, flipping it into the water of a small cove. I had to immerse my boots and lower legs to wade out and retrieve my trusty Tilley, so I spent the rest of the day squishing around in my boots. 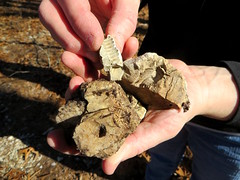 Some fishermen were nearby, drifting along the shore, with a couple of powerboats out on the lake. The rock we were treading on had thick cracking layers we could pry apart with our bare hands. We carefully made our way upslope, and I bushwhacked about, hoping to find another segment of trail, but nothing turned up. Meanwhile, Wendy was finding rocks with embedded crystals and fossil imprints. Bushwhacking turned up no more trail segments as we made our way back to the car.

End of the trail

Curious, we then followed the bulldozed pathway leading due west down to the shore, discovering that it was an AT&T fiber optic cable right-of-way. Two fiber optic lines emerged from the soil and headed down into the lake. The fishermen who had been near us before at the end of the old trail were making their way along the shore. We climbed back up to the car and headed off for another trail. A map from 1982 shows a small nature trail loop a bit east of our initial hike, so maybe some more trail remnants are there, leading down to the end of the cove where my hat went for a float, and I wonder if a loop once climbed the knob hill southeast of where we hiked. When we return to Tenkiller for the Buzzard Roost trail we might poke around this area some more.

Looking at the hours of daylight left, we saved the Buzzard Roost trail at Cato Creek for a return trip. We drove almost 20 miles down the eastern shore of the lake to cross the dam and park our car at the nearby Overlook Park. A trail there is often called the Overlook Trail, but it is marked at the trailhead as the Island View Nature Trail. It was promised to lead along the lake shore northwest to the United Methodist Boys Ranch, a group home for foster children. The Corps website says that a second leg of the trail is under construction toward the Strayhorn Landing campground, but we found that to be out of date. 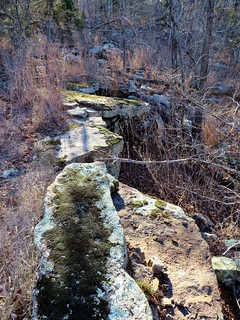 From the overlook we could glimpse the dam and a couple of islands. We found the trailhead and soon passed a bluff, but it offered a limited view of the lake below. Occasionally along the trail we could see through the winter-bared trees the lake and its islands, but the views would be largely blocked in summer. 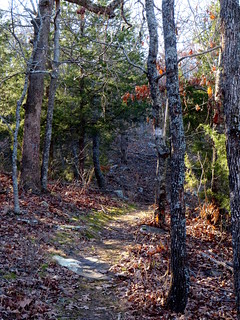 After the earlier hike along an abandoned trail, it was nice to be on a maintained trail which had decent stream crossings, including wooden bridges that show signs of both wear and maintenance. One longer bridge even had hand rails with recent repairs; the Student Conservation Association did some great maintenance on this section of trail back in 2012.

We eventually reached a fork; the right branch looked less travelled, and we took it first. Soon we reached a failed bridge, where Wendy was a damsel in distress, and I pretended I was Gandalf from The Lord of the Rings, breaking the bridge at Khazad-Dum. 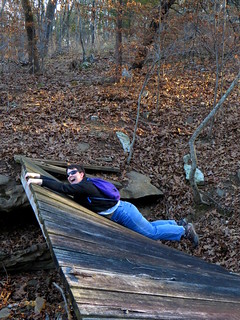 The trail on the other side of the bridge was much fainter, but could still be made out by its linear depression and occasional rock curbs. We passed flotsam deposited by high waters, and the trail eventually petered out where it approached a private home with its own tennis and basketball courts, with a large boat anchored nearby. We saw some large moss-covered rocks along the bluff and a large vine which had once coiled around a now-destroyed tree. Its coils resembled a snake gorging on a meal. Sharp-eyed Wendy found a rock with a heart-shaped hole. 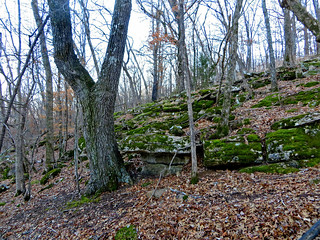 We returned to the fork and followed the maintained trail up to the Boys Ranch trailhead. Wendy readily admits she has a poor sense of direction and was crestfallen when we reached the parking area and she realized it was the far end of the trail, not the trailhead where we had parked. We hiked under four miles this day, but steep elevation changes, faint trails, and some bushwhacking took their toll. We were both glad when we returned to the car; the winter weather has prevented us from hiking as much as we would like and our endurance has eroded.

We drove back to Tulsa for dinner at Chopsticks and then returned to Bartlesville. Tenkiller continues the pattern seen across Oklahoma, where lakeside trails vary considerably in their maintenance and a good fraction are abandoned. Arkansas has far more great trails, but few novel ones are left within daytrip range, and both Wendy and I face workloads which make overnight travel something limited to longer breaks. We both look forward to returning to Missouri and Arkansas for part of Spring Break; meanwhile we’ll enjoy familiar trails and the occasional novelty within daytrip range.